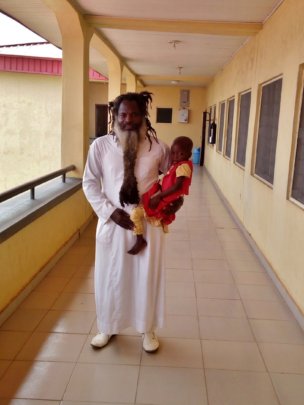 Faith in Her Father's Arms

Our patient, Faith, is a 5 year old girl who comes from a remote village located on a riverbank in South Western Nigeria where there is no road network and easy access to a health care facility. A month prior to admission to our hospital, the Obafemi Awolowo University Teaching Hospitals Complex (OAUTHC) in Ile-Ife, Nigeria, Faith became ill with abdominal swelling accompanied by severe pain, weight loss and fever. Her father who is a spiritual healer attempted to treat Faith, but realizing that his efforts were not working, he sought help from the nearest health facility. The family had to take a speed boat on the river to reach this center – a journey that took an hour and a half. She was seen by a pediatrician who suspected that Faith may be suffering from cancer. Because this hospital lacked the necessary expertise and capacity to manage her care, Faith was referred to our hospital. It was fortunate that the referring pediatrician had trained with us and was familiar with the signs of Burkitt lymphoma (BL). Faith was transferred to our hospital immediately – although it took her and her parents some four hours to reach Ile-Ife via public transport from the referring hospital. This was in October, 2016.

When she came to us, Faith was very weak and could not stand on her feet. She was also noted to be grossly anemic, in addition to having the other symptoms as described by the referring doctor and her parents. We also noted that she had fresh scarification (“cutting”) marks all over her abdomen – indicating to us that traditional methods of care had been used. Because Faith’s father is a spiritual healer, he had been administering local traditional medicines to her in addition to performing the abdominal scarification that we observed. He had hoped that Faith’s abdominal swelling would go away and wanted only to help his daughter the best way that he knew how. The use of these traditional approaches along with the family’s limited access to any type of health care facility contributed to the delay in receiving medical help.

After Faith was admitted to our hospital, she was quickly evaluated for a suspected diagnosis of BL. Due to severe anemia, we had to administer blood transfusions in order to stabilize her. Once we established that her diagnosis was BL, she was immediately started on chemotherapy. By the end of the first treatment cycle, her condition improved dramatically and her abdominal masses were barely palpable.

Her father – who had never left her side – exclaimed during our ward rounds that the doctors at our hospital were second to God. We believed that this declaration must have been due to the fact that he could not heal his daughter even though he was a known spiritual healer within his local community.

At the time of this report, Faith has completed five of the 6 cycles of therapy she needs to ensure the best possibility of long-term cure for her BL. Her parents, especially her father wishes to express “Modupe” – which in Yoruba, the local language of South Western Nigeria, means, “I am grateful” to the GlobalGiving community of donors whose generosity has provided Faith with the possibility of a bright future – free of cancer and the opportunity to live a normal life.

Our team at OAUTHC also wishes to thank the generous donors who have given to this project. Without your donations, we would not have been able to provide Faith with the necessary drugs and blood transfusions that she needed. More importantly, we, as a team, have been able to change her father’s orientation towards health-seeking behaviors. As a result, her father has promised to start educating the people in his community to seek medical assistance early, if they become as ill as Faith. We think that this will help a great deal because Faith’s father is believed and respected very much as the local community’s spiritual healer. 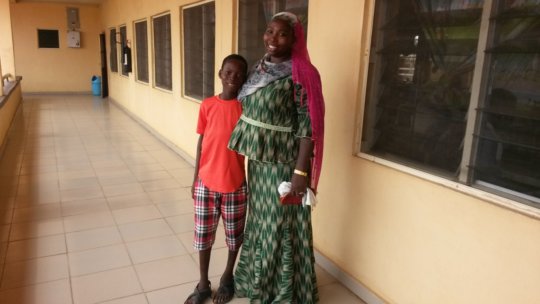 Sordiq and his Mother at a Recent Follow Up Visit

Sordiq was 13 years old when his father brought him to our hospital, the Obafemi Awolowo University Teaching Hospitals Complex (OAUTHC) in Ile-Ife, Nigeria. Three months prior to his admission to our hospital, he had developed a painless swelling of his left jaw. His parents admitted to initially giving their son traditional medicines, but when these failed, they took him to a local health facility near where the family lives. The health facility decided to perform surgery to remove the jaw mass. Following surgery, the doctors placed him on pain medications and antibiotics and assured Sordiq’s parents that he had been “cured” of the problem with his jaw. He was then sent home. The family never received a report of what the jaw mass actually was.

Unfortunately, Sordiq’s jaw swelling returned. Because his father was so disappointed in the outcome of the surgery, he and Sordiq traveled some 65 kilometers from their home in the town of Ikirun for care at our hospital. At the time Sordiq presented to our institution, he was found to have recurrent left jaw swelling and abdominal masses. We suspected that he had Burkitt lymphoma (BL) due to the classic appearance of his jaw mass along with the presence of abdominal disease. He was quickly evaluated and after the diagnosis of BL was confirmed, he was begun on treatment.

After the 2nd cycle of chemotherapy, his abdominal masses had disappeared and his jaw mass had become much smaller. His parents thought this was a miracle. They were so motivated by this result that they brought him back to complete all planned therapy – something that doesn’t always happen in a country such as ours – particularly when parents see a rapid resolution to their child’s cancer without understanding that completing all planned therapy ensures their child’s best chance for cure. Sordiq’s parents ensured that he never missed his appointments and at the end of therapy, he had complete resolution of his abdominal masses and his jaw mass. He has now returned to school and is doing very well.

Sordiq’s story highlights three points that need to be made about BL. Traditional medicines, although ineffective in the treatment of BL, are often used.  Using these types of medicines delays diagnosis and treatment and thereby can increase the risk of treatment failure.  In not getting to a specialized center such as ours, the diagnosis was missed by the initial health facility that he was treated by. Furthermore, surgery alone will not cure BL. Without chemotherapy, tumors removed by surgery will grow back just like in Sordiq's case. And, BL is usually a widespread disease within the body and therefore, not amenable to surgery. BL is one of the cancers that can be cured by chemotherapy alone – making surgery unnecessarily risky and can lead to severe disfigurement and permanent disability.

Sordiq’s parents wish to be convey their thanks not only to our team here in Ile-Ife who took care of him, but also to all of you – who through your donations – made it possible for him to have free chemotherapy and the opportunity to live his life like any other teenager his age. 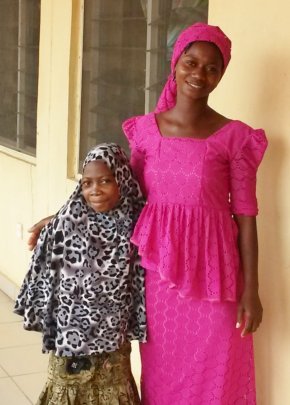 Kaosara and Her Mother After Treatment

Kaosara is a 10 year old girl who lives with her parents in a town called Odeomu in Osun State, Nigeria. In November, 2015, she developed rapidly progressive, but painless masses on both sides of her jaw. This was mistaken for parotitis, an infection of the salivary glands, which is often referred to as mumps.  Mumps is called “shegede” in the local language where Kaosara lives.  According to traditional treatments, Kaosara was asked to mouth-breathe into a cracked wall early in the morning as a remedy for her problem.  Unfortunately, after one week, there was no improvement and her parents took her to a private hospital where she received additional treatment for about three weeks.  However, her condition worsened and she was referred to our facility, the Obafemi Awolowu University Teaching Hospitals Complex (OAUTHC) in Ile-Ife.

When she came to our hospital in early January of this year, Kaosara had marked swelling of both of her jaws and bleeding of the gums. It was difficult for her to swallow, talk and breathe because of the size of her jaw masses.  She also had a paralysis of one of her cranial nerves.  This particular cranial nerve controls the muscle involved in the lateral gaze of the eye and, when compressed, causes double vision. After confirming the diagnosis of Burkitt lymphoma which was at an advanced stage, we started chemotherapy immediately. After just the first cycle of therapy, her jaw tumors had resolved and she was left with only a slight paralysis of the cranial nerve.  During our ward rounds, her mother confessed that this was a big miracle.

Her story demonstrates how important it is for a child suspected of having a highly curable cancer such as Burkitt lymphoma to be referred immediately to a center such as ours. Traditional cures were started first which were followed by a lengthy stay in a hospital not capable of making the diagnosis.  Although long distances often prevent parents from obtaining appropriate treatment for their children with cancer, in this case, Kaosara’s home town was only a 45 minute drive away from our hospital.

Social circumstances also came into play during treatment. Kaosara’s mother, who stayed with her during treatment, lost her income as a petty trader.   Her mother received no financial support from the family for Kaosara’s care. Good Samaritans paid Kaosara’s hospital bills and your donations paid for her chemotherapy. Her mother wishes to thank all of you all for your generous support for this project which enables children with Burkitt lymphoma like Kaosara to have hope for cure because now,with the correct treatment, many children can be cured.

‹ 1 ... 6 7 8 9 10 11 12 13 ... 16 ›
WARNING: Javascript is currently disabled or is not available in your browser. GlobalGiving makes extensive use of Javascript and will not function properly with Javascript disabled. Please enable Javascript and refresh this page.