Emmanuel Gets Stronger in Many Ways 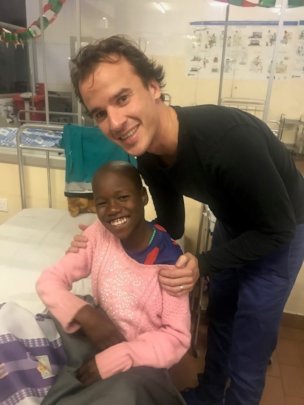 Emmanuel with Ronald, an INCTR Volunteer

Emmanuel is a 12 year old boy whose parents are subsistence farmers. His family, including his five siblings, live in the Palwo Parish in the Bobi sub-county in the Omoro District in northern Uganda.

He became unwell in 2018 and his parents sought treatment from health facilities nearby his home. Because his condition did not improve, his parents brought him to St Mary’s Hospital Lacor in Gulu where he could undergo medical investigations that were not available in his community health centers. Following these tests at St Mary's that included a biopsy, it was determined that he had Burkitt lymphoma. A total of six cycles of chemotherapy were planned in order to give him the best chance of remission and long-term cure.

Because he was very ill when he came to St Mary’s Hospital and remained ill after treatment was started, it would have been difficult for him to return home in-between treatment cycles.  Therefore, the team responsible for caring for him made the decision that he and his mother should stay at the hospital’s Family Home.  The Family Home offers many services and one of the services included the ability to attend the Rainbow Family Home School on days when he was feeling well and not having chemotherapy. Initially, Emmanuel was painfully shy at the school so it was not easy for him to answer questions asked of him and or to ask questions if he did not understand something being discussed in class.  He was also aware that he was very behind other children in terms of the basics – reading, writing and arithmetic. But, Emmanuel was very determined to improve and he attended school daily.  He grew more and more self-confident  such that he progressed in his studies and was able to really enjoy participating in both school and non-school related activities with the other children.

Emmanuel completed treatment shortly before Christmas. Although he was discharged from the hospital early in the New Year, his mother says that the family will bring him back for monthly follow up visits to ensure that he remains free of Burkitt lymphoma.

His mother expressed her thanks to everyone who supports this project.  Without your donations, Emmanuel would not have been able to receive free treatment and to stay at the Family Home.  She wants you to know how important the school was in improving not only his academic skills, but his social skills, too.  She stated that he is always willing to help the younger kids being treated with cancer by offering whatever support he can.  And, Emmanuel would like you to know that he wants to become a medical worker when he gets older so that he can help children with cancer.  Thanks again for all of your donations that helped this young boy to overcome his Burkitt lymphoma so that he can fulfill his dreams for the future!!!

Bridging a Gap: A School for Children with Cancer 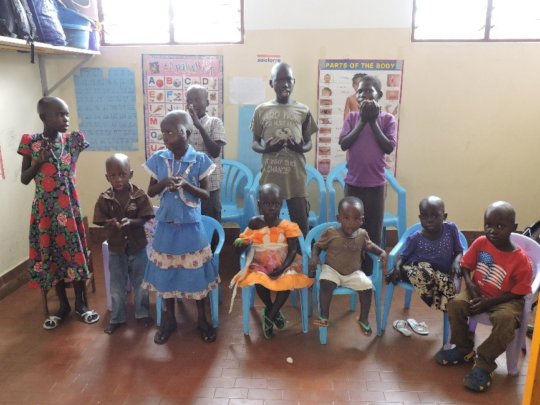 On a visit to St Mary’s Hospital Lacor in Gulu, Uganda in 2017, many children with cancer told me how much they missed being away from school and their friends. Their parents said that their children were falling behind due to prolonged and frequent absences from school.  Some children were sad because they could not keep up in school with other children their own age when they returned home.  Because children should be able to continue with their education while undergoing treatment for cancer when they are well enough, INCTR decided to provide the support for a teacher for these children.

Joyce was appointed as the teacher for the children at St Mary’s Hospital in early 2018.  She opened the Rainbow Family School Home at the Family Home for children with cancer and their parents which is located on the grounds of St Mary's Hospital.  The main goal of the school's educational program is to enable the children to cope with life while undergoing treatment through educational activities. The elements of this program include reading, writing, mathematics, health, social studies and basic English.

An example of how school can help a child with cancer is the story of Emmanuel.  He is 12 years old and is undergoing treatment for Burkitt lymphoma.  When he initially started at the Rainbow Family Home School, his skills in writing and math had deficiencies.  Because he was very shy, he had difficulty asking questions or answering questions asked of him.  However, he kept attending classes and gradually built up enough self-confidence so that he is now able to actively participate in classes with the other children. His skills in writing and spelling have improved and he is able to speak and understand simple English.  When asked about his dreams for the future, he said that he would like to become a doctor so that he can help children with cancer.

Because of the generous donations you have made to this project, the Rainbow Family Home School can continue to help children with cancer like Emmanuel.  The school provides the children with their own community that not only includes learning, but social and recreational activities as well.  Thank you for your donations!  They help to improve the quality of lives of children with cancer at St Mary’s Hospital Lacor!

David: A Case of Lost then Found 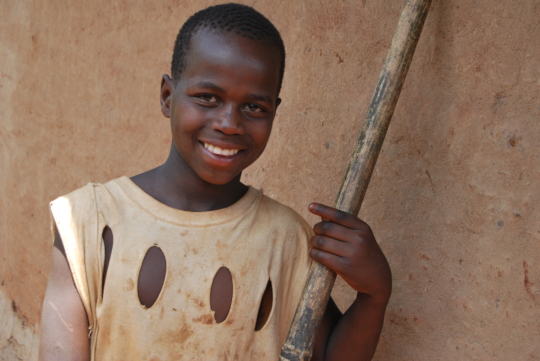 David was 10 years old when he was first admitted to St Mary’s Hospital Lacor in Gulu, Uganda in March, 2013. He came from a rural village in the Kole District which is about two and half hours away from the hospital – depending upon the access to good roads and the availability of transportation services. Both of his parents were peasant farmers and they had five other children to care for.

Upon admission, David and his parents reported that he had a five-month history of abdominal pain and swelling that was accompanied by fatigue. An abdominal ultrasound examination was performed which showed diffuse intra-abdominal involvement. He, then, underwent a biopsy of his abdominal mass that confirmed the suspected diagnosis of Burkitt lymphoma.

He was started on the first-line treatment protocol for Burkitt lymphoma. A total of six cycles of chemotherapy was planned. David tolerated therapy well, but he experienced delays of more than one week due to low numbers of infection fighting white blood cells. His parents requested a temporary discharge from the hospital after the 4th cycle which resulted in an even longer delay in starting the 5th cycle. He stayed at the hospital to ensure that he received his 6th and last cycle of therapy on time.   He achieved a complete response to therapy with no evidence of abdominal disease after the 3rd cycle of treatment and again, at the end of treatment. He was then discharged home. This was in July of 2013.

He wasn’t seen at the hospital following his treatment. We know that relapse after treatment is rare in children with Burkitt lymphoma after one year has passed. But, David was not been seen during this critical first year. Therefore, it was unknown what had happened to David. We could only speculate.   Sometimes, when a child does not return, it is because their cancer has come back and the family choose not to pursue further treatment. Sometimes, families move to other villages without giving forwarding information to the hospital or their neighbors. As time goes by, it becomes more difficult to trace a child like David. But, his parents were contacted recently.  It was a pleasant surprise to learn that David, who is now 15 years old, was very healthy and attending school. When asked why they had not returned to the hospital, they said that because David was so well that they did not think it was necessary to make the journey to the hospital and they did not want to bother the staff because they were so busy with sick children. While David’s story had a happy outcome, it is important that parents are educated about the need for their children to be followed up for tumor recurrence, particularly in the first year after treatment since this is the highest risk period for relapse.

Through your generous donations, David had access to free treatment.  Because of the generosity of the many donors who have supported this project, we felt obliged to find out what had happened to David and to other children like him who seem lost, but can be found. This is also necessary so that we can report the results of this project with certainty. Thank you again for your continued support!

‹ 1 ... 3 4 5 6 7 8 9 10 ... 16 ›
WARNING: Javascript is currently disabled or is not available in your browser. GlobalGiving makes extensive use of Javascript and will not function properly with Javascript disabled. Please enable Javascript and refresh this page.