News from the MAR Leadership Fellows 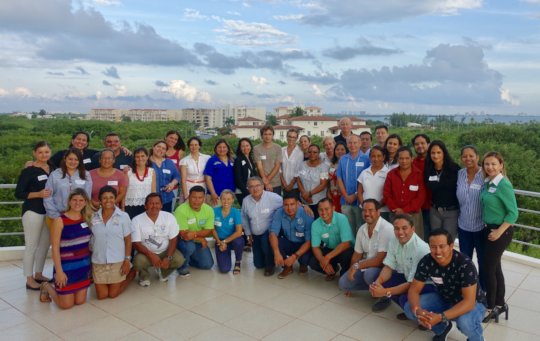 We hope you are having an excellent start to the year.

We are thrilled to share with you the latest news about the MAR Leadership Program (MAR-L).

Network on Sustainable Fisheries in the Mesoamerican Reef region

MAR-L and MAR Fund organized a second meeting of the Network on Sustainable Fisheries in the Mesoamerican Reef region on November 26 and 27 in Cancun. The objectives of the meeting were to share the preliminary results of the mapping of actors, projects and initiatives related to fisheries in the MAR, identify strengths, threats and areas of opportunity to promote fisheries sustainability, design a medium-term regional strategy; define the mechanisms of governance, membership, and operation of the network.

MAR Fellows Ana (2011) and Angela (2011) were hired to carry out the mapping of actors, projects, and initiatives related to fisheries in the MAR and facilitate the workshop. The meeting was attended by 43 people from 38 organizations from the public, academic, and civil society from the four MAR countries. 12 MAR Fellows participated in the meeting and for of them are members of the network’s Executive Committee.

The Belizean team is implementing the project: Establishing the framework for a sustainable fishery based on community rights in Marine / Estuarine Wildlife Sanctuaries in Belize. The objective is to provide a model for the transition from a non-extractive Wildlife Sanctuary to a Wildlife Sanctuary (2), according to what is stipulated in the Law of the System of Protected Natural Areas, which guarantees the long-term sustainability of the fish populations and the protection of the rights of traditional users. Therefore, this project will develop a successful framework for a fishery based on the rights of the community with the active participation of local fishers through the re-designation of Corozal Bay Wildlife Sanctuary (CBWS), which can be replicated in other Wildlife Sanctuaries. A series of consultations with stakeholder communities have occurred. It has been confirmed that the proposed zones make 28.5% of the total area and includes seven (7) conservation zones, which were assigned with the input of fishers and key stakeholders. MAR Fellows have been supporting the process of developing a Sustainable Fisheries Plan, that is aimed to serve as the backbone of the statutory instrument that will govern the new designation of the protected area. MAR Leaders have identified important gaps that were not previously considered but need to be addressed for the success of the proposed project.

The Guatemala team is implementing the Project: Strengthening protection for

sharks in Guatemala, facilitating compliance with international agreements that regulate sustainable commercialization. This project aims at achieving the sustainable use of sharks that are currently commercialized in Guatemala and strengthening current efforts for their conservation. It will promote the proper control of their trade, through effective compliance with national protocols (National Action Plan for the Conservation and Management of the Sharks in Guatemala, and international protocols. The team has had an incredible six months since the training workshop in August 2018 in Puerto Morelos. They have implemented two workshops in Guatemala to install capacities in the visual identification of shark fins with governmental institutions, universities, and the private sector. Besides, they have created the first guide for five species of sharks listed in Appendix II, of CITES, this to give tools to institutions who are in charge of exportation. IUCN Shark Specialist Group invited two members of the team to a workshop of the Red List Evaluation for endemic and near-endemic species of sharks and rays of the Eastern Pacific from Mexico to Pacific Chile which was held last week in Colombia. The team is now preparing for a meeting on the 21st of February to create the interinstitutional table for sharks in Guatemala. By facilitating this dialogue, the group will be able to get feedback on the National Action Plan that the shark group is working jointly with the fisheries department.

The Honduran team is implementing the project: Improving the health of the reef through tourism-recreational services in Punta Gorda, Municipality of José Santos Guardiola, Roatan. This project seeks to establish a community-driven model of sustainable tourism promoting awareness and reasonable use of the reef ecosystem, working with the local municipality of Santo Guardiola, the tourism institute, and other entities involved. In the long term, it seeks to improve the health of the reef by decreasing illegal fishing and simultaneously increase the biomass of herbivorous fish. On November 9, 2018, representatives of the community and Roatan Marine Park held an event to launch the project which was attended by public-private institutions. The particiánts included the Governor and Deputy of the department of Islas de la Bahía, José Santos Guardiola municipality, Banca Solidario, the Director of the Chamber of Commerce, President of the Association of Fishermen, Representative of the Organized Women's Group, OPROME, Board of Trustees of Punta Gorda), Director of RMP, afterwards the words of the Governor Dino Silvestri, the Deputy Rom MacNab, and RMP Director Francis Lean.  An assessment of the current situation of the communities of Santa Elena and Punta Gorda is being developed, with the purpose of understanding the environment and the possible economic development alternatives for these communities. Once the results of the assessment are ready, training will take the place of inter-institutional working groups to search for cooperators interested in environmental protection and the sustainable development of communities.

The Mexican team is implementing the Project: Sustainable fisheries and sustainable tourism in Bahía Espiritu Santo as a local model of community development in the MAR. María Elena and Punta Herrero communities are located in Espiritu Santo Bay south of the Sian Ka'an Biosphere Reserve. This project seeks to diversify the productive activities in María Elena and Punta Herrero communities in the Sian Ka'an Biosphere Reserve by decreasing their dependence on fishing activities and promoting responsible community tourism activities. As part of the project, they will strengthen the capacities and abilities of the community groups, encourage the participation of women under a social entrepreneurship model that generates empowerment, promotes value chains and increase tourist visits to the site. The team has requested to Quintana Roo state government to improve the road to the communities of María Elena and Punta Herrero minimizing environmental impacts. A communication and outreach campaign has been launched in social networks to promote tourism activities in both communities. A meeting with the fishermen's cooperative took place to authorize the tourist cooperative to receive a cabin on loan to provide lodging for tourists.

Thank you very much for your continuous support. 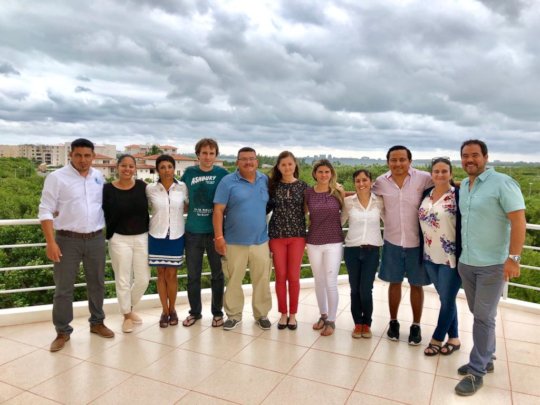 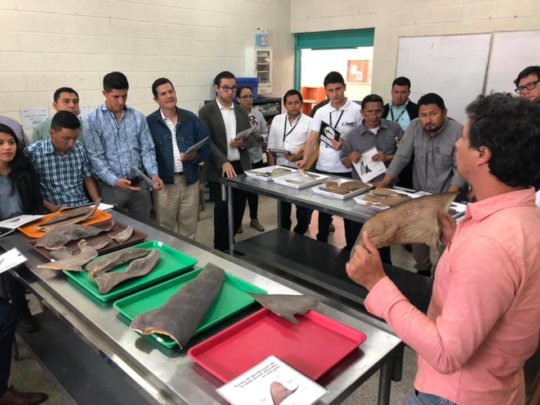 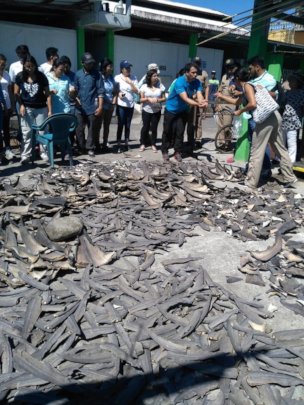 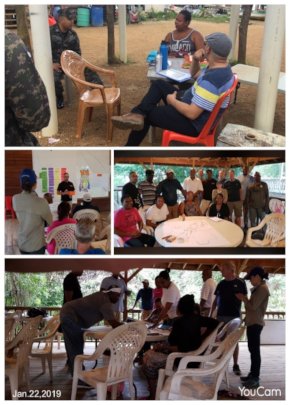 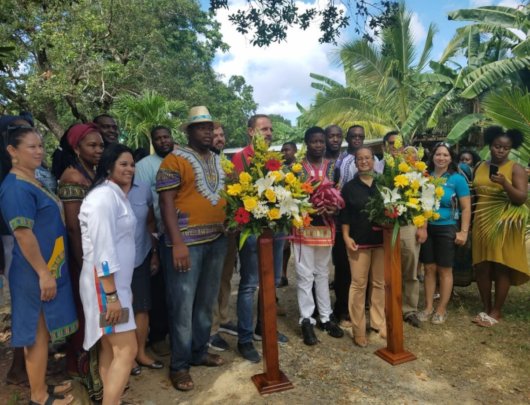 Fellows at the project launch event in Punta Gorda
Jan 15, 2019

1-2 November was Mexico’s famous Day of the Dead celebration. Whereas for most Mexicans the holiday is their way to show their love for deceased family members, for FMCN it was the opportunity to save 3 national endangered species: the American bison, golden eagle and Mexican prairie dog. It is important to preserve these species because they are crucial for the wellbeing of Mexico’s grassland ecosystems.

The campaign is a running project and, thanks to your generous donations, progress has already been achieved. Here are the advances made in the bison herd located in FMCN’s conservation ranch:
-data collection (offspring, gender, tag and chip numbers, year of birth/death, origin)
-calculations of survival rate, statistics, causes of death
-veterinary care and medical check-ups (vaccinations, blood tests, weight)

All of this has already been achieved and, by helping us reach our $20,000 target, you will contribute to educating schoolchildren about protecting prairie dogs and to the rehabilitation of injured golden eagles.

Thank you for all your support so far and here’s to preserving Mexico’s ecosystems.

We would like to thank you for supporting our new project—an initiative that will benefit 14 rural communities in the States of Coahuila and Nuevo Leon, in northern Mexico. Set to start early next year, the project aims to increase community self-reliance through the implementation of small-scale vegetable gardens, rainwater harvesting systems, wood-saving stoves, solar pots, and solid waste management modules.

Following the project, 342 families will have gained the tools to be more self-reliant by increasing their capacity to produce healthy food and obtain clean water. Additionally, the communities will be able to manage solid waste more sustainably, helping them secure a cleaner environment and create new sources of income (e.g. by selling recyclable materials).

Your support helps us improve the living conditions of some of the most vulnerable segments of the population. Thank you for joining us on this journey and please consider renewing your contribution to the project.

‹ 1 ... 8 9 10 11 12 13 14 15 ... 38 ›
WARNING: Javascript is currently disabled or is not available in your browser. GlobalGiving makes extensive use of Javascript and will not function properly with Javascript disabled. Please enable Javascript and refresh this page.