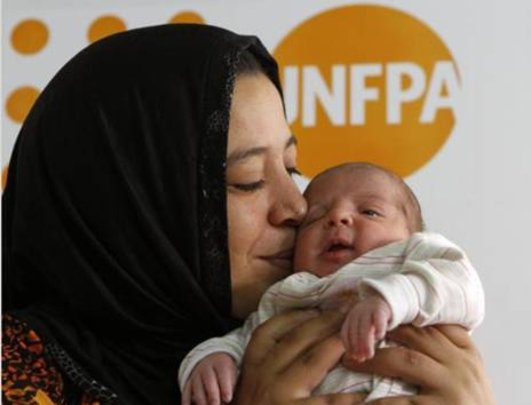 Nisreen and her baby boy Mohammed

As the conflict in Syria escalates, families continue to be displaced by the thousands. There are currently over 400,000 people registered as refugees in neighboring countries, like Lebanon and Jordan. Most of these are women and children who have fled their homes to escape the violence. Some cities in Syria, like Aleppo and Homs, are completely devastated. Neighboring countries are also feeling the strain, with the influx of refugees exhausting the existing national health services.

In the face of this crisis, pregnant women are at high risk. Women fleeing conflict may have to give birth on the run or in unsanitary settings – where can they find a qualified midwife or doctor to safely deliver their children in areas of mass devastation and violence?  Women in these battle-ravaged regions need support and care now more than ever. Please donate $11 or more to help ensure women in crisis areas have clean, healthy and safe deliveries.

Nisreen (pictured above) is a 30 year-old Syrian refugee who fled to Cyber City, Jordan, while pregnant. Leaving behind the violence and her home, Nisreen was greeted with a new world of uncertainty and a fear for her life and the life of her baby. She never dreamed she would have to give birth in a foreign land during a time of great conflict, little resources and much confusion.

Nisreen desperately needed to find health care to increase the chances of a healthy pregnancy. Skilled midwives are essential in regions like this – they ensure that women and their babies receive skilled care during pregnancy, childbirth, and in the important days and weeks following the birth. Unfortunately, turmoil makes it hard to find such caregivers. Thankfully, Nisreen found UNFPA’s midwife, Um Ahmad Ayyad, whom Nisreen describes as a “saving angle”. On October 1st, Um Ahmad assisted Nisreen in the birth of her son, Mohammed. Nisreen faced unimaginable hardships while pregnant with her child, but with the help of UNFPA, the United Nation’s Population Fund, Nisreen received the care she needed to give birth to a healthy baby, despite the difficult circumstances surrounding her.

UNFPA is assisting in the provision of lifesaving reproductive health care services and psychosocial support in these cities. By setting up camps at border areas with Syria, training partners and medical staff, and providing medical assistance (including clean birthing kits), UNFPA is ensuring that the specific needs of women and girls are factored into humanitarian response to the region.

While UNFPA works to reach every woman in need, the Fund cannot do it alone – your help is essential. There are still refugees who are forced to give birth in unsanitary and dangerous conditions without the support of lifesaving care. Providing a clean delivery kit can increase their chances of survival and decrease maternal deaths. Through UNFPA and nongovernmental groups in the region, these emergency birthing kits are distributed to mothers, midwives and nurses. The kits consist of not only a bar of soap but also a clear plastic sheet, a razor blade to cut the umbilical cord and performing episiotomies, an umbilical cord tie, cloth and latex gloves.

Please consider making an additional contribution– $25 provides a woman with hygiene essentials for six months, enabling her to maintain her dignity in disaster or emergency situations. Your gift will go a long way in ensuring that women who give life, do not have to risk their own. 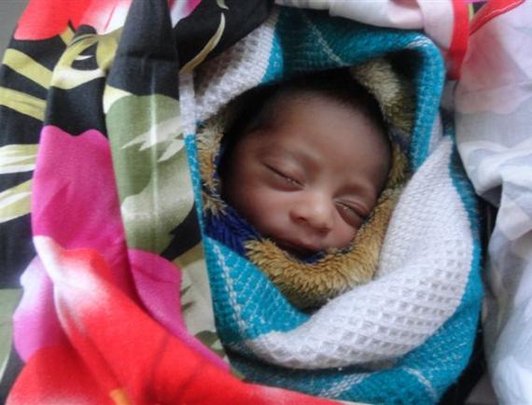 RWAMWANJA REFUGEE CAMP, Uganda -- For far too long, fighting between the government and rebels in the eastern region of the Democratic Republic of Congo has been an unfortunate way of life for the innocent people who live there. UNFPA, the United Nations Population Fund’s country office in Uganda has responded quickly to this crisis by working with partners on the ground to provide appropriate health care and support to survivors of sexual violence and pregnant women fleeing the crisis.

Women and children account for around 80 percent of internally displaced persons and refugees worldwide. Moreover, in disaster settings, about 1 in 5 women are pregnant, and mothers and babies are generally exposed to trauma, malnutrition, disease and violence.

Global Giving is matching donations on Wednesday, October 17th, with $50,000 available in matching funds – please donate $11 or more to help ensure women in crisis areas have clean, healthy and safe deliveries. Here are the stories of two pregnant Congolese refugees who recently ended up at this Ugandan camp and delivered their babies safely with help from the UNFPA and its partners.

Twenty-one-year-old Tumayine Alphonsine gave birth to her first baby, a girl, on Sept. 20, 2012. While she lived in Congo, Tumayine worked as an assistant pharmacist, while her husband, Gabriel, was a medical doctor. He stood by his wife throughout the childbirth ordeal, until she delivered safely after having C-section.

But it wasn’t a procedure that took place near their home or even in their country. Because of the ongoing conflict, Tumayine and her husband lost all their property and had to travel to this refugee camp in Uganda for safety. Her pregnancy was soon complicated by severe bleeding, and she was rushed to the Rwamwanja Health Center at the camp. The center took her by ambulance to a referral hospital in the Kabarole district, about 50 miles, away. That was where Tumayine gave birth to her little girl, weighing about six pounds.

Dr. Samuel Onyait, who assisted the delivery, said that because of the delay in getting Tumayine to the hospital, the umbilical cord had gotten entangled around the baby, so he had no other choice but to do a C-section.

On the same day, Furaha Jannete, a 30-year-old Congolese mother of six, gave birth to a healthy boy, who also weighed about six pounds, on her way to the Rwamwanja camp. Her story was as harrowing as Tumayine’s, but her husband was not by her side. While heading to Uganda with their five children, two children disappeared, so her husband had to go back and look for them as Furaha, pregnant, proceeded with the other children. But before she reached the camp, she gave birth, suffering serious bleeding. She is now recovering at the UNFPA supported Rwamwanja health center, receiving treatment. She was also informed by the International Red Cross that her children had been found by her husband and that they would soon arrive.

These two Congolese women who delivered their babies in difficult circumstances received the care they needed, thanks to UNFPA. But basic supplies are not always available at health facilities in Congolese refugee camps. Pregnant women must often buy their own materials for their deliveries, but most cannot afford to do so.  Providing a clean delivery kit can increase their chances of survival and decrease maternal deaths. Please contribute your $11 or more towards safe deliveries today, Global Giving will match up to $50,000 in donations made on Wednesday, October 17th – increasing the impact of your gift!

Through UNFPA and nongovernmental groups in the region, these emergency birthing kits are distributed to mothers, midwives and nurses at the camps. The kits consist of not only a bar of soap but also a clear plastic sheet, a razor blade to cut the umbilical cord and performing episiotomies, an umbilical cord tie, cloth and latex gloves.

Thanks to your donation to UNFPA through Global Giving, health facilities in the Rwamwanja refugee camp and other sites can make safe births possible for Congolese women. For a mere $11, your donation will enable three delivery kits to be sent to the places where they are desperately needed.

Please consider making an additional contribution today as well – $25 provides a woman with hygiene essentials for six months, enabling her to maintain her dignity in disaster or emergency situations. Your gift will go a long way in ensuring that women who give life, do not have to risk their own. 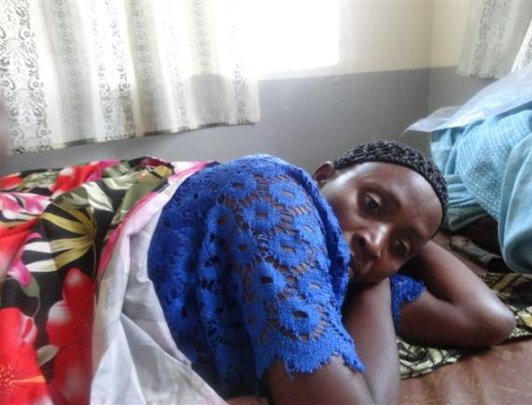 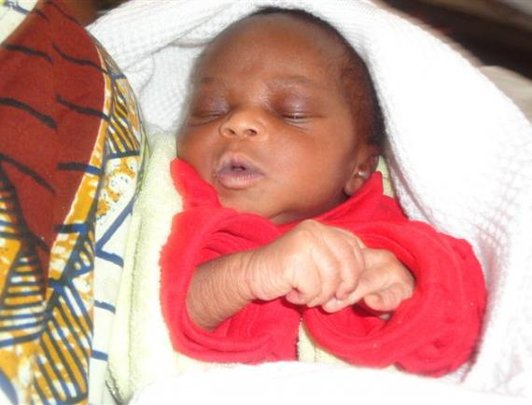 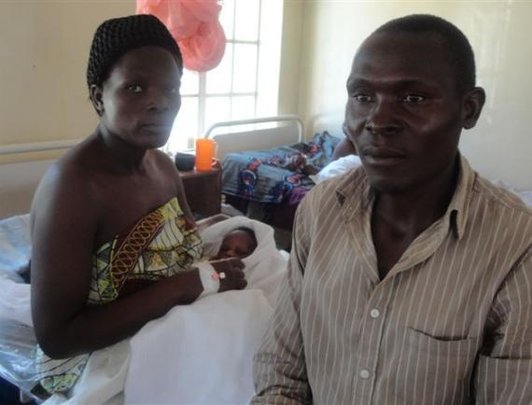 Scaling Up the Humanitarian Response for Syrian Refugees

MACCHA, Lebanon— Since the beginning of the crisis in Syria last year, nearly 80,000 people have sought refuge in neighboring countries. Given that the vast majority of refugees are women and children, providing reproductive health care for people affected by the crisis in Syria has been UNFPA, the United Nations Population Fund’s, top priority.

Women fleeing the war often have no choice but to give birth on the run or in unsanitary settings.

“A 20-year-old gave birth alone in a kitchen and cut the newborn’s umbilical cord with a string used for sewing chicken,” recalls Zeina, one of two nurses running the only medical center for Syrian refugees in the village of Maccha in northern Lebanon. “When she came to us, the baby was crying and had a severe infection. The odor was unbearable.”

Health care is affected by the conflict

Obstetricians and midwives know that childbirth is the most vulnerable time of a woman’s life, and it is impossible to predict for certain when life-threatening complications will arise. Sourraya, a 22-year-old refugee and mother of five children, admits that even though she would have liked to seek medical care during her pregnancies, “there is a shortage of medical services available in Syria.”

With the protracted conflict, medical services in Hosn and other remote towns of Syria are more limited than ever. “With the war, the only gynecologist in Hosn packed her things and fled,” says Sourraya. “Her husband is the village pharmacist. He also closed down.”

In her many years working with Syrian refugees in Lebanon, Zeina said the discussion of sexual and reproductive health is often taboo. “A 17-year-old girl who was engaged to her cousin came to us, she had not had her period in the last year, “mentioned Zeina. “ She did not think of seeking medical attention. It is only when she consulted a generalist for a pain in her ear that she made allusion to it. It turned out she had an ovarian cyst.”

UNFPA has come to action by helping distribute reproductive health kits and supplies to health centers in North Lebanon where many affected Syrian women and their families have sought refuge.

UNFPA is also organizing trainings to ensure that health workers can help prevent and manage the consequences of sexual violence, HIV transmission, and prevent neonatal and maternal morbidity.

Women and girls have also been given ‘dignity kits’ with personal items including sanitary supplies and to ensure women are provided with the antenatal and postnatal care they need, UNFPA has equipped and supplied clinics with gynecological beds, clean delivery kits for emergency deliveries, and contraceptives.

With your support, UNFPA can continue aiding Syrian women and girls during this crisis as the organization works to deliver a world where every pregnancy is wanted, every childbirth is sage and every young person’s potential is fulfilled.

Please consider making a contribution today, and help us raise awareness and funding by sharing the following report with people you know who believe that all women and girls must have the right to a life of health and equal opportunity. 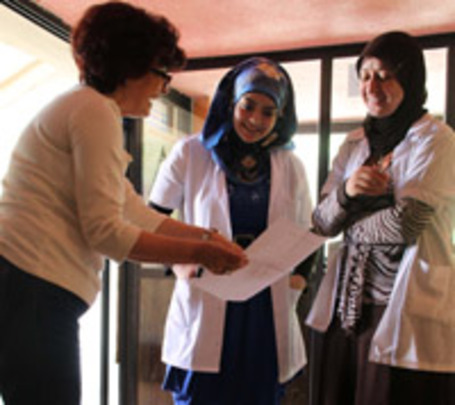 Distributing reproductive health kits in Lebanon
‹ 1 ... 10 11 12 13 14 15 16 17 18 ›
WARNING: Javascript is currently disabled or is not available in your browser. GlobalGiving makes extensive use of Javascript and will not function properly with Javascript disabled. Please enable Javascript and refresh this page.