There are 190 students being sponsored this year through our scholarship programme. The Indian school year starts in April, they then have their summer holidays from the end of May until end of June and start again on 1 July. This is the story of one of the students sponsored through the Scholarship Programme as told to our tutor Vimlesh Solanki. All the students are very grateful to all their sponsors and to those sponsoring through GlobalGiving. It really does help to improvie their lives.

I am 17 years old. My father used to work but he never gave any money to my mother for household expenses as he used to spend it all on alcohol. My mother worked at a private job and she earned 4000rs per month, but that was not enough for running a household including me and my sister.  My father also suffered from diabetes and all he did was drink alcohol and constantly fight with us. He did not bring any food to eat for us.  After he died a few years ago, all the family’s responsibility came onto my mother’s shoulders and we had very little money. In 2013 we came to Sambhali Trust and told our story and Sambhali were able to help me and my sister, Kalyani go to school. I finished my last year of school this year and I got a final grade of 61.60%.  I am now continuing to college following my sister learning typing and computer skills. I would like to become a school teacher, but we will both get a job to help my mother and the responsibility of the family.

.As our counsellor Mrs Tanwar is on leave, we have not been able to get the May reports but for the months of March and April the figures are such:

Expenditure for April and May

P’s husband was a hard drinker and abused her and beat her badly sometimes. He did not give P any money for the necessary needs of the family. She said that her husband also had an extra-marital affair with her elder sister and she came to know about their relationship. After that he started abusing her and stopped giving her household money.

She has 2 children, a daughter and a son. Her son doesn’t listen to her and supports his father because he gives him money to fulfil his desires. P’s parents also were not taking any notice of her story either. Nobody is talking to her and she was feeling lonely and depressed. She contacted Sambahli Trust to ask for suggestions. She didn’t want to go to the police station and didn’t want to harass her husband because she didn’t want to disturb her daughter’s studies. However due to lack of money she cannot help her daughter either.

P said she would like to earn some money to pay for the basic needs of the household. After listening to her story, Sambhali’s counsellor was able to advise her of the empowerment centres in Sambhali where they learn vocational skills in sewing and embroidery and learn to make Indian garments and accessories. After a 12 months course, she would have the skills to be able to sew at home (with a sewing machine donated by Sambhali) and start earning an income by sewing for her local community.  She has been enrolled in the Laadli Empowerment Centre in Jodhpur where she is receiving Sewing training and is now feeling better that she has a more hopeful future and the emotional support of the women in Sambhali.

A young woman called H, phoned from Jaipur. She said that she came from Ahmedebad and is a student studying for a BTech in her 1st year at college. She told of her mother divorcing her father when she was 8 years old and married another man in Ahmedebad. H said that she never had affection towards her step-father as she grew up. He started harassing her sexually and used to touch her private parts. She told her mother but she did not say anything to her new husband and asked H. to stay quiet. Afterwards she told everything about her step-father to her maternal family but they didn’t support her stating that her stepfather was financially well off compared to them.

So H decided to leave Ahmedebad. After finishing school she filled in the enrolment form to go to college in Jaipur. But now her parents want her to return to Ahmedebad and continue her studies there. Of course she doesn’t want to return to that life where she was harassed every day. Her parents warned her that next year they will not give her any fees and hostel expenses, so that she would have to return to Ahmedebad. She was very worried about her studies and asked Sambhali for suggestions. Mrs Tanwar, the Trust’s counsellor, suggested she share her problem with the warden of the hostel who might give a discount on her fees. Secondly she gave her the number of a Woman’s HelpLine that was actually in Jaipur that could help her and give her some financial help to finish her studies. Thirdly she suggested that she could get a part-time job in Jaipur and also gave her the contact details of an NGO in Jaipur that she could apply for a study loan.

In this way Sambhali was providing her with some options and contact details in Jaipur which she could contact to help her continue her studies.

B called from Jaipur and said that his parents were staying locally. His mother is very much in trouble as his father is ill-treating his mother, abusing her and sometimes beating her too. The father doesn’t listen to anyone including B’s mother. B. requested that Sambhali call his father on behalf of “a women’s HelpLine” and counsel him and warn him that if he continues to ill-treat his wife, action would be taken against him. B. asked not to disclose his name whilst calling his father. Our counsellor rang the father and requested that he stop abusing his wife. After 3 days, Sambhali called B to see if his father’s behaviour had changed and and said that some of it had changed (for the better).

N Called from Gurgaon and said that she was in a relationship with a boy and had been living together for the last 2 years. They both had decided to get married and the the families also agreed with their relationship, despite them being from different castes. N’s boyfriend said that he wanted to get his business settled before their marriage in Chandigarh, because that’s where he came from.  So N helped him financially because she wanted to get married as soon as possible. Her boyfriend, A, went to Chandigarh and soon afterwards wasn’t taking N’s calls. After 2 months, she tried to contact him via someone else. When she finally spoke to him, she said that she was pregnant and they would have to get married, but she was shocked to hear him say that he was not ready and advised her to terminate the pregnancy. She got depressed and called his mother who then let her know that he wanted to marry someone else from Chandigarh.  She was totally shattered and couldn’t decide whether she should marry him or move on in her life or teach him a lesson. She asked Sambhali for suggestions.

Mrs Tanwar, the counsellor suggested that she move on in her life; if she forcibly married him then she may or may not remain happy in their lives together. She advised that marriage is a relationship between 2 souls based wholly on truth. As he has broken her trust, she should not continue this relationship which is not based on truth. She should move forwards in her career and terminate her pregnancy. She should try and forget this incident in her life and move positively forwards to become an empowered woman. After the counselling, she felt very relaxed. Sambhali was able to help this young woman out of her depressed state and motivated her to move on with her life. 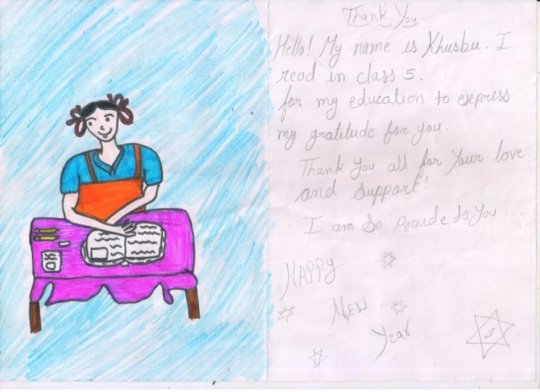 thank you letter from student

A year of education is now coming to an end.

Students in our scholarship programme are taking their final exams of the year at the moment. We have children sponsored in schools from 3 years old onwards. Some of our students have studied for several years, have progressed to higher education and have finished their degrees and diplomas. We are very proud of them. Some of the young girls and boys have become role models for many children that are following. Our participants are poor and needy; their mothers or women in their family are participants of the Trust. This is the reason these children have been properly evaluated and the Trust has been able to invest in their education with generous and continuous sponsorship by their sponsors including all those who have supported this programme through Global Giving.

Some of our students have a school break after their final exams in the first week of April. Their schools will then re-open and provide them their report cards and enroll children into the next standard (school class). From 15 May students will have their summer break until 1 July if because it is too hot to study and temperatures in the region hover around 35 °C (95 °F), with daily maxima occasionally topping 50 °C in the rural desert areas (122 °F).  It is then time for the participants to write thank you letters, send personal reports and photos to the sponsors and we have already started looking for new sponsors and for new children to sponsor.

We would like to share a story with you about Mr. M who is a taxi driver in Jodhpur and father of six daughters and a son. He kept on having children because his family thought they needed a boy child to carry on the family name. Mr. M. is a heart patient and has had surgery to put stents in his heart. He is the only earning member of his family and earns about 8000 rupees a month which is not even sufficient for the running of his household. He was recommended to Sambhali Trust by a former member of our National Board of Advisers. He came to the office and wanted the Trust to help him send his daughters to school. The Trust met with the girls and was very happy to see them enthusiastic about education and the need to go to school or continue their schooling. With the help of individual sponsors all the six girls are now back in school and enjoy studying very much. Mr M and his wife are very proud of their daughters. They realize that education can make their daughters independent and strong.

Male-female difference in literacy rate in Rajasthan = 28% (the national average = 16.7%).

24% of Rajasthan’s population is between the ages of 6 and 14 years old of which 5% don’t attend school. 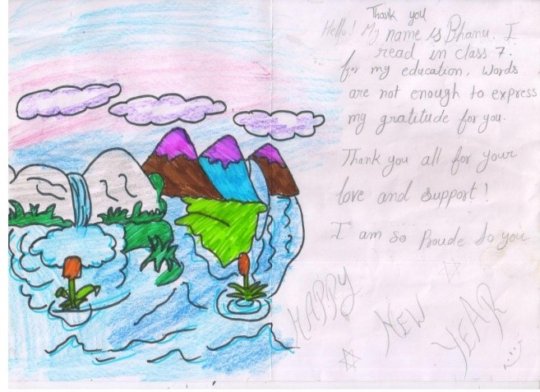 another thank you letter from a student
‹ 1 ... 4 5 6 7 8 9 10 11 ... 18 ›
WARNING: Javascript is currently disabled or is not available in your browser. GlobalGiving makes extensive use of Javascript and will not function properly with Javascript disabled. Please enable Javascript and refresh this page.