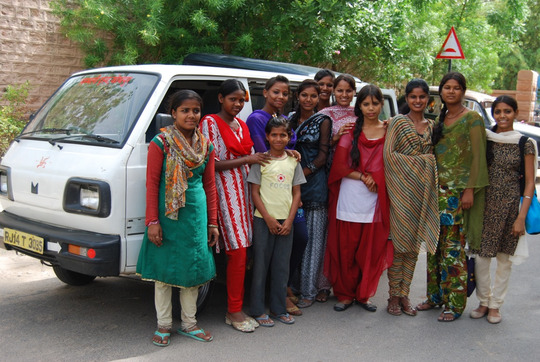 Sambhali's new minivan with some of the students

Last month we managed at last to buy our own minivan for the girls to be transported in, instead of the need for rickshaws.   As I realized the other day, it needs to be slim, to go down the narrow streets in Jodhpur and in their communities, weaving in and out of the traffic and in between the cows, carts etc! We had hoped for this for a long time and thanks to your support, finally we’ve managed to get it. It means now we can transport the girls to and from the Empowerment Center; the Graduates to the Sewing Center, the teachers to our new Empowerment Center, “Sambhali  Sisters for Sisters Project”  which is about 11km on the outskirts of Jodhpur in a shelter home for orphaned girls.  All the girls love it and it’s so useful it’s used all day long!

1st June saw the opening of our new Boutique in the town center, near the Clocktower in Jodhpur.  We decided to move to a different site, which is now on the pathway route up to the Mehrangarh Fort, the main tourist attraction in Jodhpur, so it is easily visible.  It has taken us a month to fit it out and we are now very happy with the result.  We have employed Monica who has been a student of Sambhali since the beginning, was then sponsored to go to school and has been one of the best students in her class.  Her father died a couple of months ago and the income of her family is relied upon through her sister who works in the Graduates’ Sewing Center and herself, as her mother is unable to work now.  Monica is so happy to be working in the boutique and we haven’t forgotten her studies, so we are making sure that she has private tuition at the same time, so that she can resume her education when she wants to.  We feel that the experience she will get working in the boutique will also help to increase her self-confidence and her ability to manage the sales, stock etc.  We have high hopes of Monica doing really well in the future, because of her all-round ability, adaptability and enthusiasm to do everything and her interest in women’s empowerment.

The girls in the Jodhpur Empowerment Center have been working hard on learning how to make garments (salwaars and kurtas) and also doing quilting techniques and products including making shoulder bags.  We have had a couple of volunteers, one of whom returned to do a theater workshop for a month. They developed a performance which demonstrated examples of the type of problems that women face in Rajasthan including verbal and physical abuse.  The girls developed their drama skills and really enjoyed giving performances in both Jodhpur and Jaipur for International Women’s Day.  We’ve had many volunteers helping with English tuition and Arts and Crafts classes as well giving different workshops including family-planning workshops which were given by Carlotta, a professional volunteer we were lucky enough to have from Germany .

The graduates have fulfilled making an order of soft toys including cats and monkeys, elephants and camels for an organization in the US.   We had a little good-bye party to a volunteer who had been with us for 3 months, Marlies Schmid, who has taught the women how to make western-style garments – trousers, tops, skirts and dresses. The women have been so keen and committed to learn and they have had daily tuition from Marlies for the last 12 weeks. We have found a supplier of printed cotton in Jodhpur and now we are making these clothes out of printed cotton together with some linen trousers for the Boutique.  All the women went down to the Boutique a couple of days after it opened again, to see all the things they have been making displayed in the shop.  It was lovely to see how much it meant to them.   So now we are able to produce garments and welcome any orders!   We are developing samples for potential orders at the moment after the women have been working hard for a month stocking up the boutique. 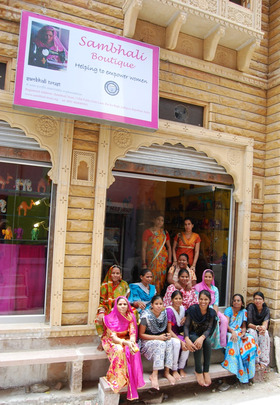 Opening of the new Sambhali Boutique in Jodhpur 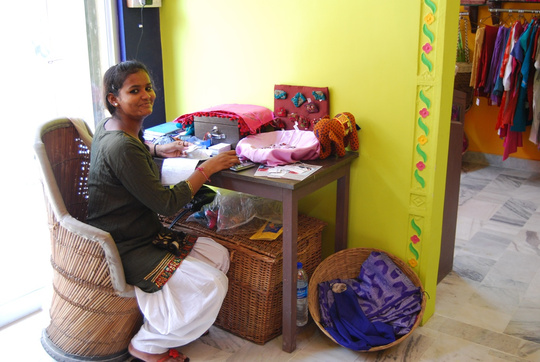 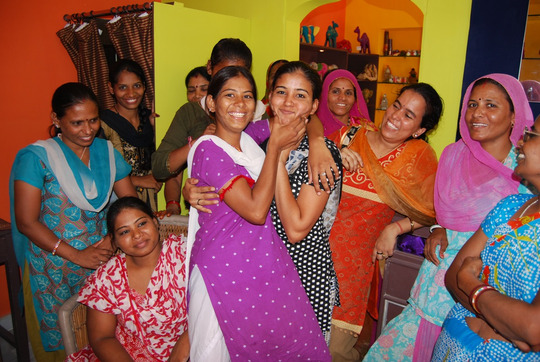 Graduates having fun at the new shop opening 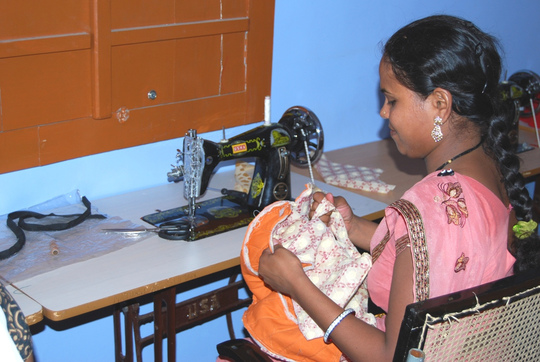 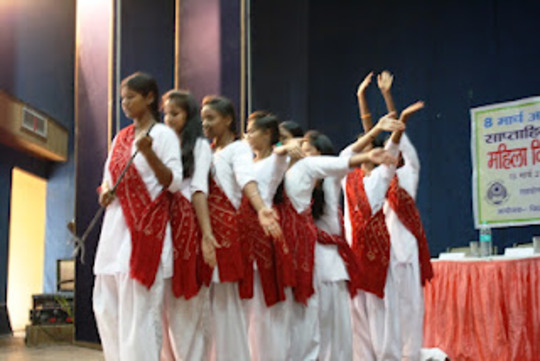 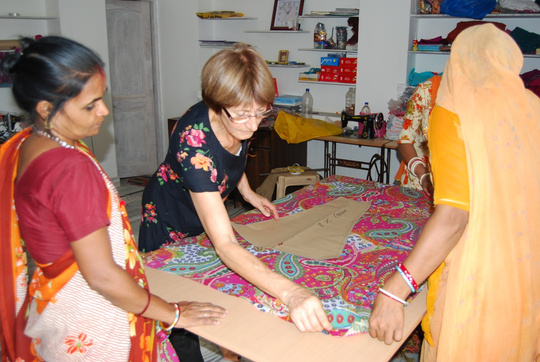 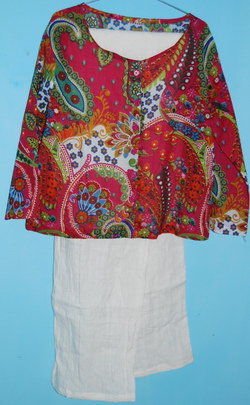 Cotton top and linen trousers made by graduates 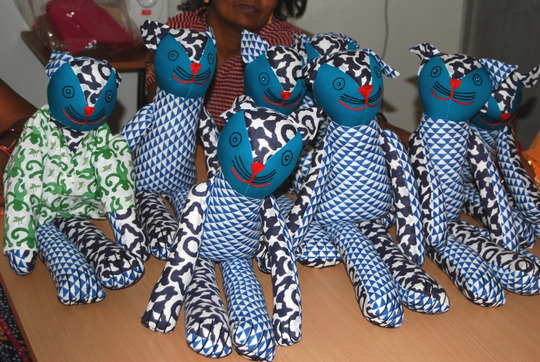 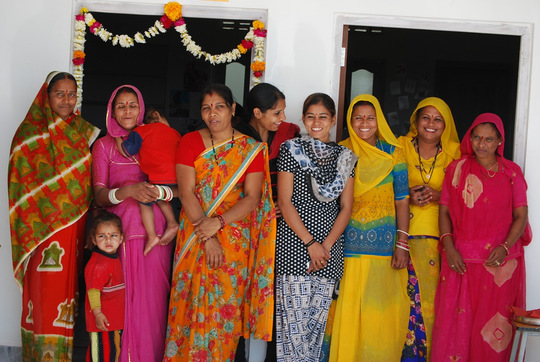 Graduates outside the new sewing centre

Sambhali has been in the process of transformation over the last few weeks which has evolved in having a new larger and better sewing centre for the graduates.    We have found 2 large rooms which have just been refurbished and are perfect for our new sewing centre.   We have a new set of graduates, who have spent the last 2 years at the Payal Empowerment Centre and have moved into one of the rooms, alongside the graduates from Prithivipura who have moved into the other room. Although we were confident this would be a better structure in the long-term, we needed to gain the confidence of the Prithivipura girls who were moving from their own sewing centre, they had been running successfully under Sambhali’s umbrella for over 2 years.  We asked them what they thought and after a discussion between themselves they were very happy to move to a better premises.

Now we have the space to develop new ideas, produce garments and work on larger scale orders as well as space for the stages in production and storage.  Our first order at this new centre is for 1000 bolster covers which has got our new set of graduates into production mode very quickly and when they realised that the order coincided with the Holi Festival, they pulled out all the stops to finish the first part of the order so that it could be completed on time.

At present we have just finished an order for 200 block-printed scarves in 4 different colours and are now working on building up the stock of scarves and bags for the Sambhali Boutique, which is in central Jodhpur.   Following that we also have an order for a variety of soft toys and also some shoulder bags in the pipeline.   Building up our orders is important to creating a sustained all-year round income for the graduates and so we are always happy to hear from people who are interested in any of our products.

We have 10 graduates at present ranging in age from 20-45 years old. Two of the older women, Saraswati and Radha are the supervisors of each group and all the graduates have either come from the Dalit community or have a disturbing story to tell.  Santosh a lively, keen woman with 2 young children, has an alcoholic husband,  who drinks away any money he earns without caring for his family, leaving Santosh the burden and responsibility of looking after the household, caring for the children and trying to provide for them.  She bursts into tears when she tells the story of how her children stand outside the school gates, watching the other children go to school, knowing that she can’t afford the clothing, equipment etc to enable the children to go to school.  Understanding this, Sambhali Trust is now looking for sponsors for her two children to go to a good school, under its Scholarship Programme.  Usha is 20 years old and has been a graduate for 2 years.   She told us the other day, that she was due to get married to a boy recently, that would have been arranged a long time ago, but her mother said that as now she was earning a regular income, she was independent and she could wait for a longer period of time to get married.  This is quite a revelation in lower caste families where their daughter is generally married as soon as possible, because they are seen as a burden on the family, usually having no opportunity to earn a good living.  Usha has now been earning an income for 2 years and so she would not want to give this up lightly, to be the dutiful wife and revert back to doing the household chores.  Hopefully, her family will find her a husband (as all marriages are arranged in this community), who respects her new found independence and her ability to work outside the home, be creative and use her own ideas.

Tamanna, our Arts and Crafts teacher who has been with Sambhali for the last 5 years, will now become the supervisor of the Graduates Centre and will help with developing samples and patterns and give advice where necessary.  We have also been very fortunate in having volunteers who are spending a few months working with the graduates who are dressmakers.  They have introduced them to western styles of clothes and have produced about 10 different tops, skirts and trousers where the girls have also learnt methods of finishing seams, button-making, darts and the use of interfacing.  The women have been very keen to learn the new techniques and are now very adept at using the electric sewing machines that have been donated.  We are going to produce a selection of these styles for the Sambhali Boutique as well as keeping a record of all the patterns, for future potential orders. 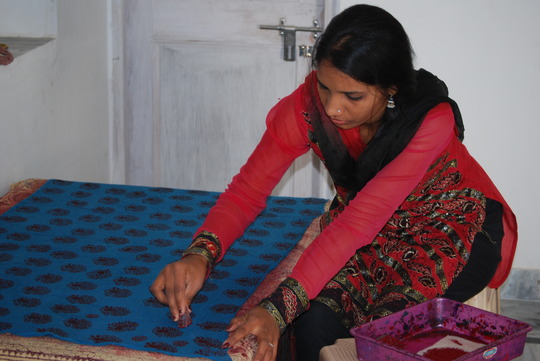 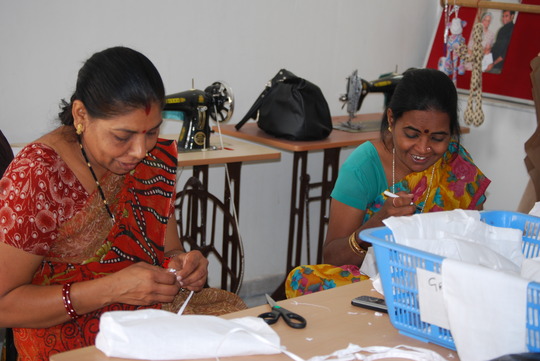 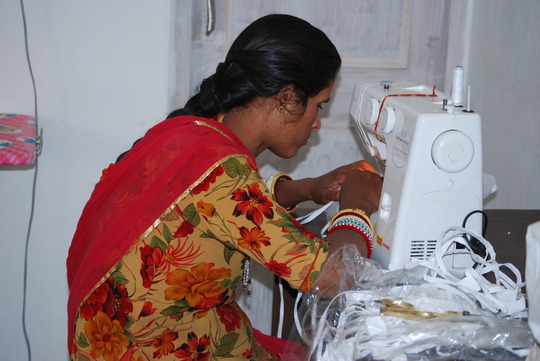 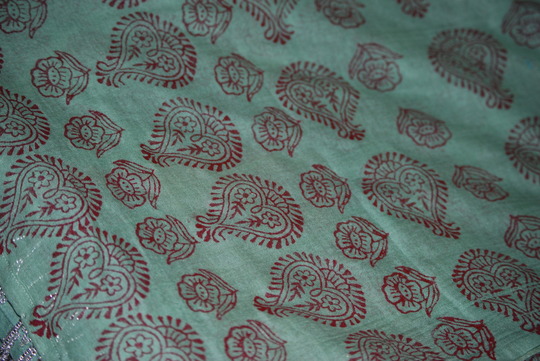 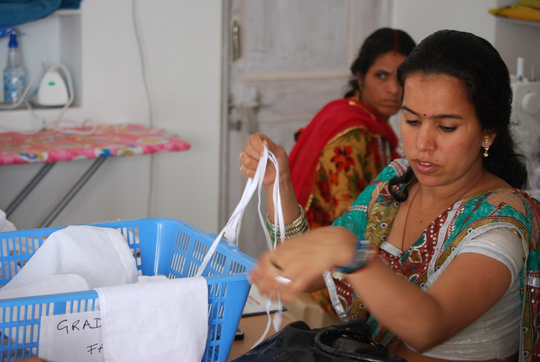 Our idea for the Shelter Home for Women Survivors of Domestic Violence was conceived a few months ago when we realised at Sambhali Trust the need for a place for women who suffer from domestic abuse and have no place to go.  We feel it is a very important project to be able to start in Jodhpur and since this project was created on Global Giving in August 2011, we have only received $35 and so have been unable to start it.  However, because we feel strongly that this is a desperately needed form of support for these women and it links with the Trust’s main aim of Women’s Empowerment, we are looking elsewhere for funding.  We are hopeful that we might succeed elsewhere and so have this project up and running in a few months.  Therefore, for this reason we are deactivating the Shelter Home Project from Global Giving.  We have already contacted the two donors who have very kindly supported this project and asked them if they are happy with the money being kept for this Shelter Home project until we are able to start it, or whether they would rather their money go into the Empowerment Project for Women, the alternative project of Sambhali Trust on the Global Giving website.  We are very grateful to all our donors for their generous support in both projects, which is helping to make such a difference to the lives of the women and girls in Jodhpur and Setrawa in Rajasthan.

‹ 1 ... 11 12 13 14 15 16 17 18 19 ›
WARNING: Javascript is currently disabled or is not available in your browser. GlobalGiving makes extensive use of Javascript and will not function properly with Javascript disabled. Please enable Javascript and refresh this page.