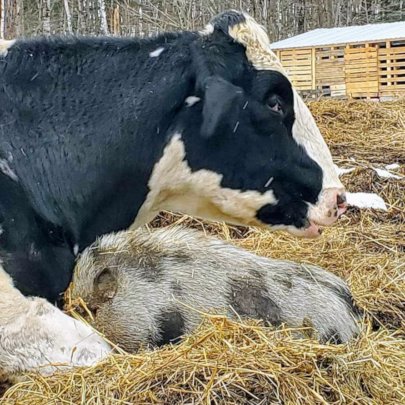 "Cuddle buddies" Jasper the cow and Val the pig

Greetings and thank you again for seeding change by helping to feed animals at VINE Sanctuary!

I hope that you saw the overall 2019 Review for the sanctuary when we shared that on social media. If not, we’ve attached a PDF. We closed out the year with more than 700 animals in residence, having organized or participated in more education and advocacy events than ever before.

None of this would be possible without friends like you. We thought you might like to know about the local folks whose efforts help us to make the most of every dollar you give.

Last Friday, our hay supplier stopped by with a bill and some good news: He got a bargain on bulk baling supplies and decided to pass all of the savings along to us by cutting our price per bale by 10%! Since hay is our largest single outlay, after payroll for our hard-working animal care team, that will be a substantial savings.

The local feed store also helps out by giving us a bulk discount and by donating any “broken bags” (sacks of feed torn in shipping) to the sanctuary.

As part of its “zero waste” efforts, a local grocery store donates big crates of wilted and dented produce twice each week. In addition to saving money, this adds joyful and nutritious variety to the diets of sanctuary residents, who gather around each delivery day, eager to see what surprises might emerge from the crates. (It’s pretty fun to see a cow eating a pineapple!)

One of our volunteers also drives for a “Meals on Wheels” program that delivers fresh produce to low-income seniors and people with disabilities twice monthly. After each run, their own rules say that they must dispose of any produce likely to go bad before the next run. With their permission, that volunteer brings that produce to the sanctuary, so that it will not be wasted.

So, you can see, you really are part of a whole community of generosity in your support for the animals at VINE Sanctuary!

As part of our 20th anniversary celebrations this year, we aim to scale up several of our most effective projects. I’ll tell you more about those projects in another update, but I do want to share one piece of great news: We’ve already managed to add an additional school to our “Barnyard Buddies” program that allows classes to visit to virtually “adopt” sanctuary residents, receiving monthly humane education lessons. In this way, children who may never visit a sanctuary still can learn about and develop empathy for farmed animals.

Thank YOU for being a "barnyard buddy" by supporting the sanctuary! 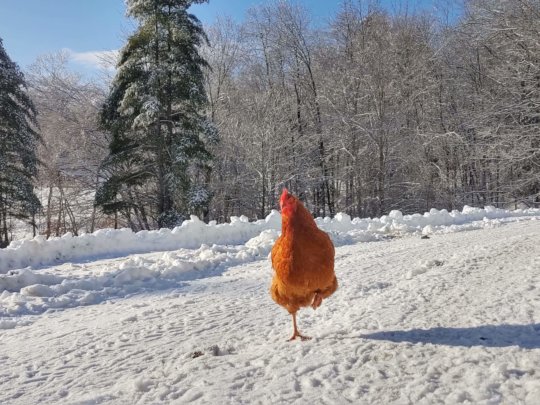 Meet the Rooster Who Started It All 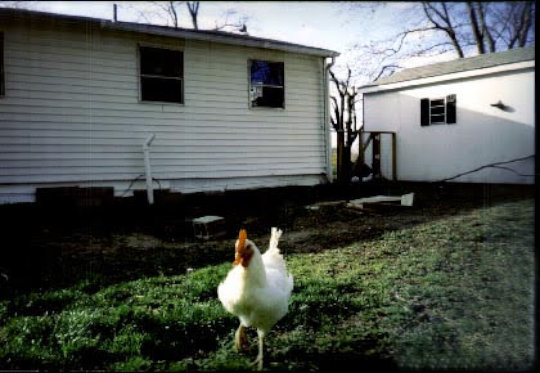 Greetings and thank you again for supporting The Rooster Project at VINE Sanctuary!

I hope that you saw the overall 2019 Review for the sanctuary when we shared that on social media. If not, you can see it here. As always, we took in many roosters ourselves, helped other sanctuaries to solve rooster problems, helped people wanting to surrender roosters to figure out how to keep them, and helped humane authorities care for and place roosters seized from cockfighting.

We’re celebrating our 20th anniversary this year, and so I thought that you might like to “meet” the rooster who started it all, since his legacy lives on in The Rooster Project.

In late January or early February of 2000, Miriam Jones and I found an escapee from the local poultry industry in a ditch by the side of the road in rural Maryland. We brought her home and grew close to her as we got to know her. And then she started crowing.

That was a surprise because this bird was not at all the stereotypical cocky and aggressive rooster. That started us thinking about why those stereotypes exist and how they are transmitted from generation to generation, a topic that we have been writing and speaking about ever since.

We knew that this rooster, now called Viktor, was lonely. So, we called the local humane society to tell them that we would take in any chickens other people found on the road. (Chickens regularly jump or fall from trucks headed for the slaughterhouse.) Within a week of that call, Viktor was joined by Violet and Chickweed.

When he met them, he was so excited that he didn’t know what to do. He strutted, he posed, he clucked, he crowed. Eventually, even though he was only a few months older than the newcomers, Viktor became a sort-of single parent to the scared brother and sister, instructing and scolding them as he showed them around the grounds.

Viktor demonstrated the depth of his devotion to the youngsters when we brought them into the house for a couple of days to allow Chickweed to heal from a minor injury. For each of those days, Viktor stood rooted to the spot where he’d last seen them, staring at the door. We had to lure him to eat and force him to go to bed at night.

In the intensity and richness of Viktor’s relationships with Violet and Chickweed, he again demonstrated that the popular portrayals of roosters were both simplistic and false. In his own devotion to his sister, Chickweed also defied stereotypes.

The next birds to arrive were three adult escapees from a “broiler breeder” facility, including Rosa and Che. Viktor fell in love with Rosa at first sight, and she liked him too. Che also adored Rosa, and she liked him too. Viktor and Che were friends, united in their care for Rosa rather than competing for her affection. This, again, was different behavior than the stereotypes would suggest.

As so many of the big white birds bred by the poultry industry do, Che first lost the use of his legs and then died suddenly of a heart attack. Che had been the caretaker of his group, and he continued to extend care to others even after he could no longer walk, lifting his large wings to shelter younger arrivals to the sanctuary.

Viktor visited with Che daily while he was disabled. On the morning after Che’s death, Viktor walked to the spot where Che had died and made the saddest sound I had ever heard.

So, you can see why we never believed the other big myth about roosters, which is that they cannot co-exist without fighting. As time went by, we met more and more roosters who taught us more and more things, including a colorful group of 24 (including several former fighters) who all moved in at the same time. But it all started with one rooster, whose wish for companionship led to the creation of a sanctuary and whose loving behavior toward other birds (including other roosters) immediately challenged us to challenge the myths about roosters.

Because of this history, The Rooster Project has a special place in my heart, so I thank you very sincerely for your support of this ongoing effort. As part of our 20th anniversary this year, we hope to scale up this project in Viktor’s memory. I’ll look forward to telling you more about that in the next update. 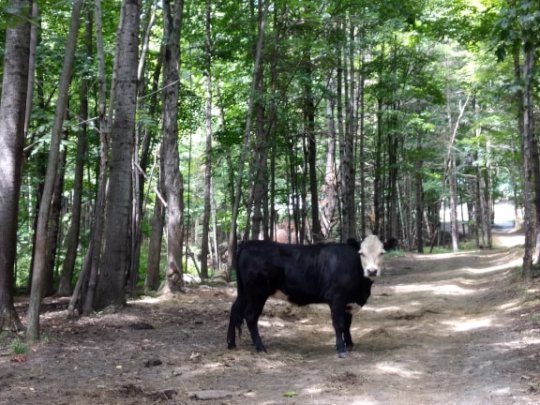 Greetings and thank you again for seeding change by helping to feed animals at VINE Sanctuary.

The flocks and herds at the sanctuary have gained many new members since our last update:

Nearly 100 “spent” hens who had been discarded by a factory-like egg facility joined the flocks in the part of the sanctuary we call “the valley.”

Thirty of the large white roosters and hens bred by the poultry industry moved into the special coop and yard reserved for vulnerable birds like them. Our Anna was part of the rescue team that saved them and hundreds of others.

As always, hens and especially roosters arrived at the sanctuary singly, in pairs, and in small groups after being rescued or surrendered by people unable to care for them.

We’ve also been busy with the education and advocacy work that is rooted in our on-site care for our nonhuman community members. We’ve had three more monthly meetings of our Pasture Pals humane education for local youth. The special Halloween edition of Pasture Pals was especially well-attended.

Within Vermont, I gave one “Lunch and Learn” talk on the plight of farmed animals to volunteers, staff, and supporters of a rural humane society; presented a lecture on solving social problems by repairing our relationships (including our relationships with “nature” and animals) as part of a “Tend the Root” workshop series on personal transformation for ecological transition; and facilitated a discussion on “Repairing Our Relationships with the More-than-Human World” as part of the “Out in the Open Summit” for rural LGBTQ+ people. Some participants in that summit also made a “field trip” to VINE.

We also presented another workshop in our veganic gardening series — this one on seed saving—at our local public library. Further afield, I gave a lecture on “Queering Animal Liberation” at Rhode Island College. While that talk was not taped, you can watch this video of a similar lecture last year.

Everything we do is rooted in the everyday care and feeding of the more than 600 animals at the sanctuary. We couldn’t do that without you. Thank you again for your support! If you’ve not yet done so, please do consider signing up to make a monthly contribution or using the sharing tools provided by Global Giving to encourage your own social circle to donate. 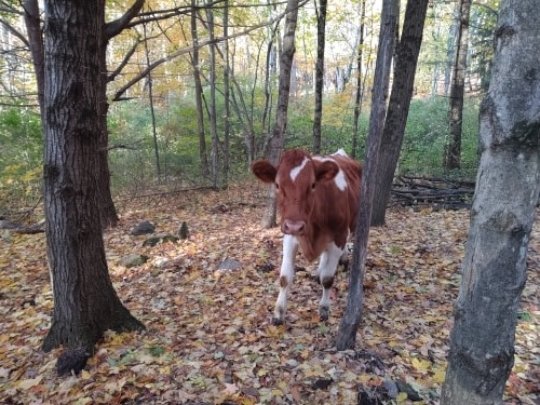 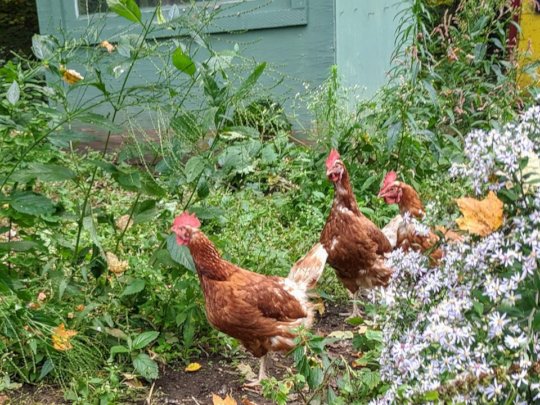 Hens from egg facility on their 1st day outside 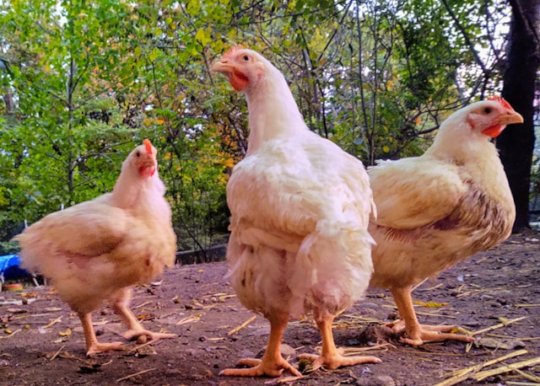 Kaporos survivors on their 1st day outside