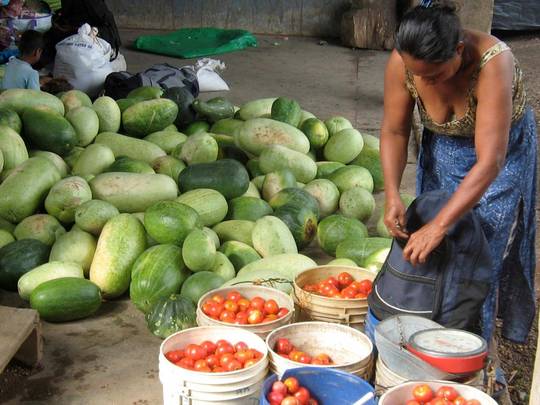 The North Atlantic Coast, where MADRE’s sister organization Wangki Tangni works, continues to face food crisis in the aftermath of Hurricane Felix, which exposed the neglect to indigenous communities in the North Atlantic Coast in Nicaragua. The state does not provide resources to meet people’s basic needs. The hurricane also exposed the vulnerability of these communities, and changed the relationship that Indigenous Peoples have with the environment.

In 2007, through Harvesting Hope, MADRE and Wangki Tangni provided 50 machetes, 50 files, and food aid including flour, sugar, and coffee for families in the community of Kisalaya. Overall, 250 women received these supplies and began to clear plant debris from their gardens and recover salvageable grains from flooded fields of rice and maize before planting began again. While many homes still needed to be rebuilt, this aid ensured that immediate needs of food were met and women in rural communities were able to begin providing food security for their families.

Since then, MADRE donated 100 packets of organic certified seeds of vegetable and flowers that benefited 80 individual family gardens in Kisalaya, Miquel Bikan, Bawisa, and Waspam, and to 33 communal gardens along the Coco River. In total, about 1,100 people benefited from the distribution of organic seeds. Chickens were also provided, along with training in organic soil preparation, fertilization, and pest control, as well as in women's rights, sexual and reproductive health and rights, violence, collective rights, and their relationship to the economic, social, and environmental struggles participants face. MADRE has supported the organization of local farmers’ markets to allow 25 women to sell surplus produce as a way to enhance community cohesion and facilitate the distribution of educational material on women’s rights, indigenous rights, and women’s health. 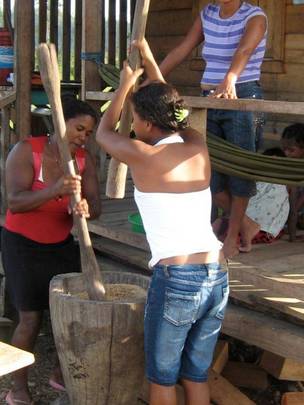 To celebrate International Women’s Day, on March 9th, 2008, OWFI organized a festival in the theater hall of Baghdad’s Technology University. The festival was fliered widely in the streets of Baghdad, and the hall, which seats 550, was so crowded there was not even standing room in the aisles.

To open the events, the Hurriya Theatre Group performed a play dedicated to the memory of Du’a Khalil Aswad, a seventeen-year-old Kurdish woman who was stoned to death in 2007, allegedly for dating a Sunni boy. The “honor killing” took place in the town square of Bashika, where one to two thousand men brutally murdered Du’a, while local police watched on in total compliance. The play, whose only line of dialogue was the phrase “Love will not die,” was met with ovations and riotous applause from the packed hall.

Following the play, OWFI Director Yanar Mohammed delivered a rousing speech. Musician and long-time OWFI friend and collaborator Jafar Al Mshattat, who smuggled musical instruments across militia checkpoints to attend rehearsals, performed a song written specially for the struggles and strengths of Iraqi women, followed by popular ballads and love songs. The side aisles and balcony of the space were crowded with students and young people singing and dancing. Lastly was a poetry jam featuring some of Iraq’s most talented young poets and activists.

This was a landmark evening; the ability to hold such an event in public in an oppressive military state was marked as a huge success in the history of the women’s movement in Iraq. Many attendees recorded parts of the performances on their cell phones to show their friends and family who were unable to attend. The hosting University’s administration was so impressed with the event and the reaction it garnered that they invited OWFI staff back to hold regular women’s rights workshops for students and faculty.

On March 20th, as part of an outreach program to youth in occupied areas, OWFI held another Art Action for Peace event in Al Madaen, also known as Salman Pak, marking the fifth year of U.S. occupation in Iraq. This Sunni suburb 15 miles south of Baghdad has been a hotspot of sectarian violence in recent years, as roving Shiite militias and extremist Sunni groups like Al Qaeda have been terrorizing residents. The “Awakening,” a moderate Sunni militia funded by the U.S. military in hopes of limiting area bloodshed, has, in actuality, escalated tribal violence.

The event was held outdoors at a local secondary school and attended by many youths from Al Madaen/Salman Pak and surrounding neighborhoods. Some young soldiers of the “Awakening” movement came to the event, and, while organizers were worried they would object to an atmosphere that was far from encouraging paramilitary culture, the militia members were so moved by the performances that they stayed until the end of the event, guarding attendees and artists from any possible attacks. The event was very successful, garnering new participants and performers alike, and spurring requests for Art Action for Peace events in neighboring areas.

We hope you will give today to support this wonderful initiative from MADRE and OWFI. Your help can build new bridges for young people navigating the difficulties of occupation and civil war.

MADRE and OWFI give thanks: How your donations helped save lives

In 2007, MADRE and OWFI continued to shelter women from honor killings and life threatening violence. All of the women helped by the Safe Houses project have incredible stories; following are some recent cases.

Rasha, from the city of Diyala, is the widow of a man murdered by one of the several militias targeting so-called insurgents. Her husband’s killers continued to visit her daily at her home, raping and torturing her. Nazik, of Tikrit, left her husband, who beat her regularly. Nahida’s husband suddenly began to abuse her when he joined up with a terrorist gang. Um Missaab, a returning political prisoner attempting to reassimilate into society, suffered at the cruelty of her in-laws. Hind escaped a prostitution network, and was followed by two others, Sanna and Bushra. Nadia and her daughter escaped an oppressive marriage, and sought help from militia officials who now threaten and psychologically abuse them. Shila left her hometown of Rania, in the Kurdish territories of Northern Iraq, when plots of her murder, in the name of honor killing, surfaced. A mother and daughter from Mahmoudiya sought shelter after the daughter was raped by an impostor Mulla who claimed to have been treating her for depression.

Painstaking measures are taken to make the shelters as safe and stable as can be expected, but OWFI’s operation are still at the mercy of a government which devalues their work and sees victims as honorless women undeserving of protection; officials at all levels go out of their way to make OWFI’s business matters as difficult as possible. In addition to the larger shelters, staff members have begun to house threatened women and families in their own homes. This spreads out the women and lessens their chances of being found by their tormentors.

Children who live at the shelters are enrolled in schools, or, in more dangerous cases, tutors are arranged for private lessons at home; they are also trained in basic computer skills, in hopes of increasing their employment opportunities. All shelter residents receive health care from Nahida Ismail, a registered nurse who uses her connections with a network of volunteer doctors and gynecologists to see that all the women get proper care.

In addition to the work done in shelters, OWFI has launched several advocacy campaigns in the Kurdish North of Iraq (also known as Kurdistan) discouraging honor killings and seeking to repeal an article of the regional Constitution which endorses use of the Islamic Sharia law to uphold honor killing cases in family court. The initiatives, led by OWFI activist Houzan Mahmoud, were quite successful, rousing support from many social and intellectual groups in the area, and the offending article was removed from the criminal code.

MADRE and OWFI were deeply moved the support of the Global Giving community for this project. Your donations have been crucial to the heavy demands of being the sole shelter network for Iraqi women escaping abuse and honor killings. Thanks to you, we have been able to expand security forces, conduct more outreach, shelter more women and children, and save more lives.

We hope that you will continue to support OWFI through its new project now up on Global Giving, “Art Action for Peace: Support Young Iraqi Artists.” This project is focused on OWFI’s popular youth outreach initiative, where hundreds of young Sunnis and Shiites join together to call for an end to civil war through art, poetry, music, theater, and dance. Rather than succumbing to sectarian hatred, the young people involved work to create a society that promotes human rights and tolerance.

Again, we thank you for your support.

‹ 1 ... 90 91 92 93 94 95 96 97 ... 99 ›
WARNING: Javascript is currently disabled or is not available in your browser. GlobalGiving makes extensive use of Javascript and will not function properly with Javascript disabled. Please enable Javascript and refresh this page.