Hadia and Amira's Path to Safety

Sisters-in-law Hadia* and Amira were displaced from their home for four years after ISIS took over their village. They ended up at a displacement camp -- often a dangerous place for women. While there, Hadia and Amira were both sexually assaulted.

After their village was liberated from ISIS control, they returned home. Soon after, Hadia’s husband (Amira’s brother) found out about the sexual assault and became furious. He beat them with a heavy electricity cable, claiming “death will clean the shame you brought to our family.”

Hadia and Amira fled to their neighbor’s home and thereafter approached the village leader. When they told the leader that they were innocent and had done nothing wrong, he turned to local police for help. The police, in turn, sought help from our partner, the Organization of Women’s Freedom in Iraq (OWFI).

Because Hadia’s brother and his cousins were searching for the women, OWFI staff met with Hadia and Amira in secret. Together OWFI, the village leader and police captain agreed that the women needed to leave the village for their safety. But men often hold onto identification documents for women in their family, and without identification, Amira and Hadia could not travel. Because of your support and that of others like you, OWFI was able to obtain temporary identification, allowing the women to relocate to a remote village where they could remain safely with a relative.

OWFI’s help left Hadia and Amira overwhelmed with gratitude. They said, “We were 15 minutes away from death. Every minute, every hour, and every day we live is because of you. Thanks for taking such a huge risk doing humanitarian work.”

OWFI’s actions also succeeded in opening the eyes of the village leader. He said, “You have changed my mind about human rights organizations. I thought they could only provide a little food and water and then leave, but you rescue people from death. I asked several organizations before you for help, but when I tell them I have a case of an honor killing they say, ‘We can’t deal with this case.’ You all are brave.”

Thank you for supporting our brave partner OWFI and their lifesaving work. We’re inspired by them every day, and we hope you are too! 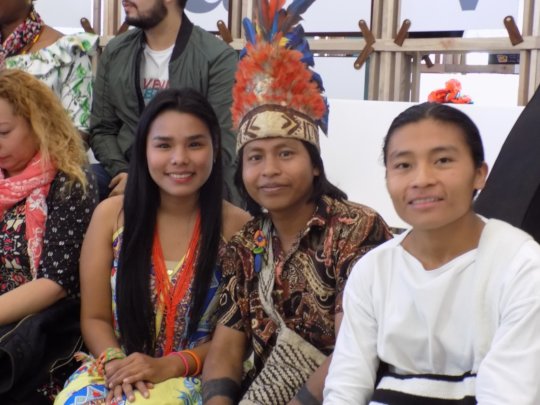 Indigenous leaders at the Truth Commission.

Since 2001, MADRE and our partner, Taller de Vida, have worked together to put an end to the long-term armed conflict, promoting justice and building a sustainable peace in communities affected by war across Colombia. MADRE has supported Taller de Vida to bring art therapy and healing to Indigenous and Afro-descendent communities and support younger generations to step up and reclaim peace for their present and their future. With your support, Taller de Vida leads psychosocial support and reintegration programs for former child soldiers, and helps empower survivors of the armed conflict.

Earlier this month, Taller de Vida agreed to work with the Truth Commission to shed light on the atrocities communities suffered due to decades of war. With the peace accords signed and at the crossroads for reparations and justice, Taller de Vida is ensuring that children, young people, and girls from Indigenous and Afro communities across Colombia are not only included, but that they play an active role in the peace process. Thanks to their local advocacy, Taller de Vida brought the voices of young people to the Truth Commission to document and acknowledge human rights violations committed during the conflict. This is an important step toward justice and the recognition of the human right to survivors of knowing the truth about the consequences of armed conflict in remote communities.

With MADRE’s support, and yours, Taller De Vida will play a critical role in the Commission, ensuring that the voices of children, young people, Indigenous peoples and Afro-Colombians can be listened to and taken into account when writing the history of the country’s turbulent 50 years of conflict. For Taller de Vida to have their peacebuilding contributions recognized at such a significant level is an historic achievement for the organization and its members. It’s role in the Truth Commission underscores the value of their community-based leadership that MADRE has supported over 15 years.

Taller de Vida will contribute their expertise in art-therapy and psychosocial approach to support the Truth Commission in documenting cases of human rights violations of children and youth during the armed conflict and bring about reconciliation and restorative justice for children, young people, Indigenous peoples and Afro-Colombian communities. This represents a fundamental step to recognize survivors’ experiences and build a stable and lasting peace in Colombia. The transitional justice mechanism of truth seeking represents a catalyst for prosecutions, reparations and institutional reform. Thank you for making this possible! 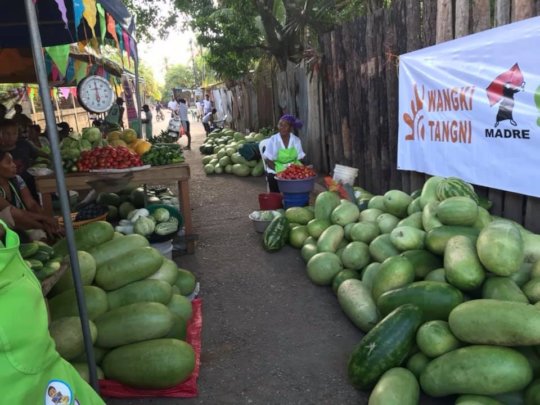 Women sell their produce at a market.

This summer, our Nicaraguan partner, Wangki Tangni, hosted a delegation of Indigenous women from another partner organization, MUIXIL, from Guatemala. The two groups exchanged ideas and shared strategies, including a discussion about the Harvesting Hope program. Wangki Tangni shared the 15-year history of Harvesting Hope: how the program operates and its growth over the years.

Since its creation in 2003, Harvesting Hope has made significant changes to the community and its outlook for the future. With funds raised from selling their produce, local women farmers were able to help bring potable water to their community; they also have electricity and can afford to send their children to school to get a higher education.

The convening groups also shared their ideas for the program’s future; the women have started teaching younger generations the value and importance of harvesting and want to expand this education, buy more seeds, and explore the best ways to widen the market for their goods. They also hope to one day have better transportation, allowing them to sell produce in hard-to-reach communities.

‹ 1 ... 4 5 6 7 8 9 10 11 ... 100 ›
WARNING: Javascript is currently disabled or is not available in your browser. GlobalGiving makes extensive use of Javascript and will not function properly with Javascript disabled. Please enable Javascript and refresh this page.