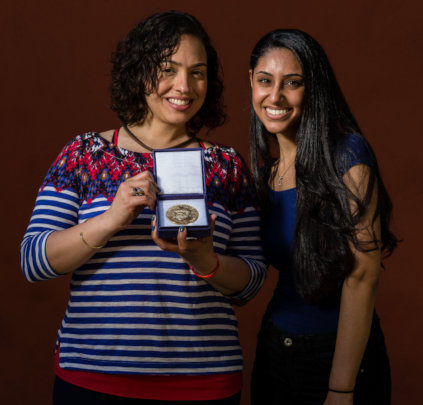 Rebecca Irby and Myrna Nakhla with the ICAN Nobel

PEAC Institute started back in 2016 as a reaction to my time spent in Japan. I was working there and visited Hiroshima on a long weekend. I was so taken aback by what I learned there from a Hibakusha, a survivor of the Hiroshima bombing.

Although I had no experience in filmmaking I decided to make a documentary about the Hibakusha and why we need to all be concerned about and fight for the total abolition of nuclear weapons! Now, at the time people said I was crazy and idealistic. "this is impossible, it's never going to happen". This is the type of talk that is ALWAYS prevalent when any kind of abolition is on the table. I knew there were others who felt as passionately as I did so instead of being discouraged I found my people.

ICAN, the International Campaign to Abolish Nuclear Weapons, was full of "young, idealistic" people just like me. And you guessed it - WE DID IT! ICAN won the Nobel Peace Prize in 2017 for.....the Treaty on the Prohibition of Nuclear Weapons. 122 nations have signed so far.

Drawing upon ICAN's success, it is clear that young people have a significant voice in the field of international peace and security. We train our students to become activists and in turn, they get more people involved. It's a ripple effect and it started with you! Thank you for being a part of our project!!