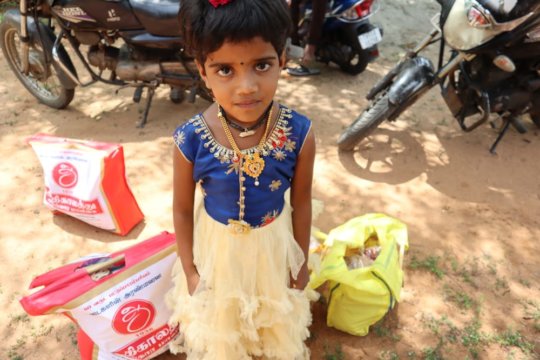 The reporting period of three months had once again been totally focused on the COVID 19 pandemic related interventions. Like most part of the nation and in particular, the working villages and towns of SPPD also have been witnessing the impacts of the second wave of the corona pandemic in a big way.

Children and members of the families belonging to the unorganized labor working as daily wagers have been enduring the enormous fall outs of the lockdown induced by the pandemic. For the children of the daily wagers, the closure of schools for more than a year since the outbreak of the pandemic has had a telling effect on their physical and mental health.

SPPD has been supporting a total of 1500 such deprived children with monthly distribution of nutritional food kits consisting of nine nutritional food items enough to last for a month. Dates, lentils, nutritional mix, health drink, cow peas and chick peas are some of the components that formed part of the kits. As many as 5800 nutritional kits were provided to the children during the period. This intervention has gone a long way in preventing those children from falling prey to child labor and child marriage of girl children in a big way. The nutritional kits were effectively made use of by SPPD as a tool to negotiate with the parents to prevent them from sending their children for work and deciding to marry off the minor girl children.

Similarly, the families of unorganized labor such as daily wagers, road side vendors etc were given kits of groceries to last for two months. As many as 140 families of the unorganized sector were provided with these groceries kits during the period. These two interventions one for the children and the other for the livelihood lost families have been carried out with the sponsorship and support of the Give India online platform.

Apart from these main interventions the awareness generation on the need for vaccination against COVID 19 and the protection protocols such as wearing masks and social distancing were being carried out continuously during the three months period in our working areas. 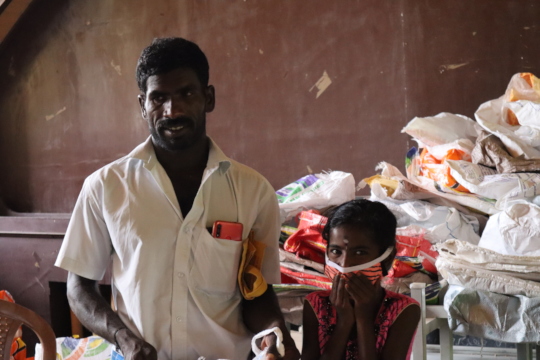 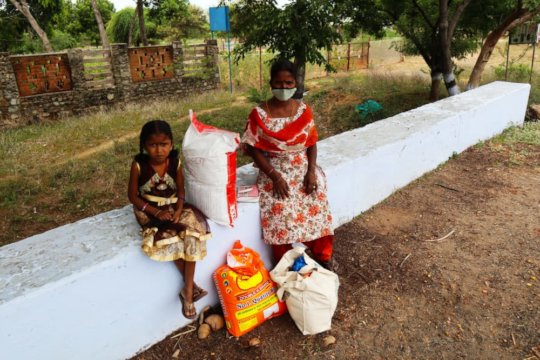 There are quite a number persons living with HIV in the working villages of SPPD. And the suffering of the children of the parents living with HIV is extremely miserable. Hence, taking their pathetic plight in to account SPPD has involved in the intervention of providing nutritional food supplements and other activities to towards the healthy survival and development of the children living with HIV here in the villages. This program could be carried out with the noble support of the Give India.

The nutritional kit comprised of the following items of lentils, pulses and other vitamin rich items.

The distribution of this nutritional supplement kit goes a long way in helping the children living with HIV here to cope up with the demands of the ART therapy that the persons living with HIV have to undergo for their very survival. Nutritional food is very much necessary to maintain a good immunity levels and thus their CD4 count in balance. This apart, at the time of their receiving the nutritional kit, the children and their parents received counseling on various aspects about maintaining their health in fighting the condition caused by the HIV infection.

Surya (name changed) is 13 years old and is living with HIV as he got infected from the dreaded disorder from his mother. His mother had passed years ago and his elder sister also had died when she was four years old due to HIV infection that she contracted from her mother.

Surya’s father had abandoned the family when he was hardly two years old and he has been living in the care of his maternal grandfather. His grandfather is partially disabled with a limping leg has been taking care of Surya with the small income he makes. Though his grandson carries the social stigma of being HIV positive and his own partial disability he has been trying his best to take care of Rajendran.

Surya’s grandmother is sickly and cannot contribute to the family’s expense. With the corona pandemic further damaging the livelihood, his grandfather has been struggling hard. With Surya being under ART (Antiretroviral Therapy), his health has been deteriorating with weight loss and decrease in CD count due to malnutrition during these times. CD count is a vital health parameter to be maintained for persons living with HIV.

Under these circumstances, the groceries kit given by Give India has proved to be a panacea for the entire family especially for the health of Rajendran. His grandfather while thanking the sponsors of Give India and SPPD says the variety of dry food items of the kit and the substantial quantity has enabled him to bolster the health of Surya.

Tamilarasan (name changed) and his three children two daughters and a son live in the village of Trichirapalli district. All the four of in the family have been living with HIV. Tamilarasan’s wife had died out of AIDS more than a decade ago.

Since then, Tamilarasan has been taking care of the children who all have been under ART therapy, despite his own weak health condition caused by the HIV infection. Now though his two daughters have grown up and trying to earn their own livelihood by taking up work as tailoring assistants the Covid pandemic situation has left them in dire straits as such jobs have become scarce. Tamilarasan’s son the youngest in the family is undergoing ITI (vocational skill course).

All the four in the family have to mandatorily undergo the ART medicine for survival and this in turn requires good nutritional supplements. And during the pre-corona times though minimal, the contributions from the two daughters was helping them to meet this need to a great extent. But with that income having been greatly reduced the family was finding it extremely difficult.

In such a situation according to Tamilarasan the groceries kit they have received from Give India will go a long way in helping all the four members to keep their immunity and to increase  the CD count of all of them.

He further says this groceries kit comprising of rice, wheat, lentils, oil and other rations would help to meet the nutritional needs of the family for a period of at least two months till the girls start again to earn. All of them express their gratitude to all in the Give India and SPPD for this great help in these struggling times.

Happy youth in the midst of Pandemic

The reporting period of the three months of March to May 2021 unfortunately happened to be the period of heavy spread of Covid19 in its more ferocious second wave here in our region.

There was a big dip in the number of admissions in various vocational skill courses. The skills required in the tourism and hospitality sector have been the most preferred courses of youth in our working areas. This sector of tourism and the hospitality industry were the worst hit during the pandemic times and the drop in the new admissions the courses concerned.

And all the students undergoing various courses had gone on internship in different places such as Bangalore, Coimbatore, Ooty and Chennai. They were undergoing their internships in the reputed hotels, resorts and restaurants. A few of those who had completed the courses earlier had also been absorbed by the establishments in which they had undergone internship this year. This would not have been possible but for the kind help of GlobalGiving.

And these internees had returned from their work places due to the onset of the second wave of corona pandemic since the month of March. During the period sensitization were carried out among the youth who form part of the GlobalGiving project through tele-calling bulk messaging on the protective measures such as wearing masks, social distancing and vaccination wherever possible.

This apart, SPPD took the initiative of building confidence in the minds of both the current students who are part of the project and other youth in general here on the need for keeping themselves well equipped in the skills to be fit for the job market in the post pandemic times. This is because there was a general depression among the youth on the future as the covid19 pandemic has been ravaging the livelihood of the people all over.

Hence, we focused more on counseling them through instilling confidence in their minds that once the pandemic is over there would a brighter future for those who are properly trained in various skills. This apart, the younger children in the families of those who happen to be siblings who form part this project are given the nutritional food supplement kit every month sponsored by the online platform of Give India.

On concluding this report, we again thank the GlobalGiving and the individual donors who are associated with the organization for helping the youth towards ensuring their future.

1 2 3 4 5 6 7 8 9 ... 27 ›
WARNING: Javascript is currently disabled or is not available in your browser. GlobalGiving makes extensive use of Javascript and will not function properly with Javascript disabled. Please enable Javascript and refresh this page.