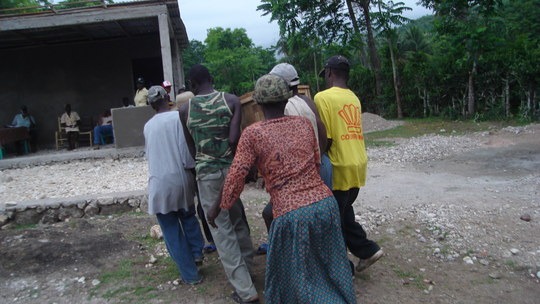 Members of ODRO carrying the motor into the mill

Just six months ago, January's devastating earthquake hit Haiti. Since then, the Lambi Fund of Haiti has been working relentlessly with local farmers’ organizations throughout rural Haiti to expand local crop production, improve farming technology and to provide farmers with the credit, seeds and tools they need to succeed. Strengthening Haiti’s agriculture sector will be a key component in the effective recovery of Haiti. Increased food production will provide valuable incomes for farmers, while providing local and affordable sources of food to Haitians. Thanks to your support, these efforts continue to yield results. Lambi Fund just completed the construction of a community grain mill in Southwest Haiti. Members of ODRO (Organization for the Development of Robert) provided labor and community resources to realize the mill’s completion. Just days ago, the motor for the grain mill arrived and was installed in the newly constructed grain mill. Now, members of the ODRO community no longer need to walk 2-3 hours to the nearest grain mill. Haitian farmers can enjoy the increased productivity and higher quality of milled grains right in their village.

Help more sustainable agriculture projects like these become a reality, and continue your support today. 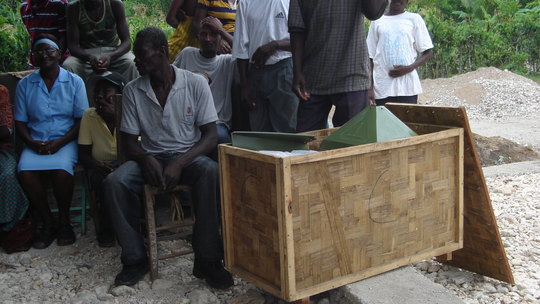 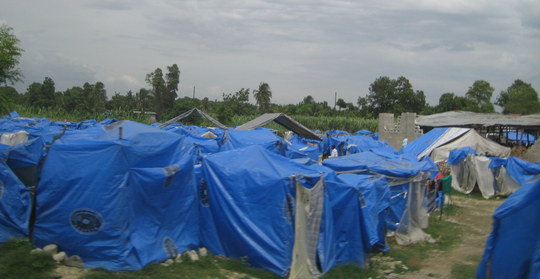 It’s been nearly six months since January’s devastating earthquake hit Haiti. While Haiti still has a long road to recovery, many small victories have been made. The Lambi Fund of Haiti has been working ardently with local peasant organizations throughout rural Haiti to promote proper hygiene and sanitation. Thanks to your donation, Lambi Fund has been able to empower these organizations as community leaders map out plans for latrines in their communities. Grassroots leaders have been working hand in hand with the Lambi Fund of Haiti and water sanitation experts to determine ideal locations for latrines, the formation of local oversight committees and plans for construction and implementation.

With these important steps for planning well underway, communities throughout rural Haiti are no longer dreaming of improved methods of sanitation, but working to attain them. Many thanks for your continued support of the construction of community latrines in rural Haiti. Your assistance allows even more local Haitians enjoy the improved health and cleaner living environments that accompany proper sanitation. 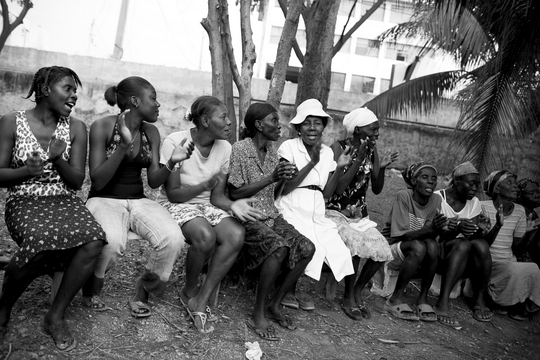 To say its been a difficult past four months is an understatement, yet thanks to your generous support, Lambi Fund has been able to provide substantial relief. Lambi Fund has worked with partner organizations throughout Haiti to provide community members with the relief they need. Members have provided essentials like food, water, shelter and medical supplies to 1,000's of earthquake survivors.

Hopefully you'll find the following article from our Spring 2010 Newsletter informative. It is Lambi Fund's hope that reading this will provide you a quick snapshot into life in Haiti post-quake, Lambi Fund's work so far, and our plans for the future.

PROGRESS AMID THE CHAOS:Lambi Fund Responds to the Earthquake Disaster in Haiti

On January 12 the ground shook. It trembled like never before. In just a few horrifying moments, a massive earthquake destroyed Port-au-Prince, Haiti’s capital, and major provincial cities like Jacmel, Léogâne, and Petit-Goâve.

The world watched in horror as the toll on human life unfolded. Never before, declared UN Secretary-General Ban Ki-Moon, has a natural disaster been so devastating.

The horrible stench of death lurked in the city for weeks afterwards. Over 200,000 people were killed. More than 150,000 individuals injured and left to live life as amputees. In the blink of an eye, nearly 2 million Haitians were rendered homeless.

Responding to such a catastrophe has not been easy. Through the rubble, roads were impossible to navigate and trying to coordinate the influx of international donor agencies was declared a logistical nightmare.

Earthquake survivors left with no homes, no food, and no jobs quickly realized that aid distribution would be slow and unreliable.

Thus over 500,000 affected residents caught the first bus they could find to live with family members and friends in the rural provinces of Haiti.

This massive migration of internally displaced persons has wreaked havoc on already impoverished rural communities, where the average person still survives on less than $2 a day. Some rural populations (so much as) doubled overnight.

Keeping with the Haitian tradition of peasant solidarity, rural communities have been quick to take in quake survivors and have shared with them everything they have. The 80-year-old mother of the field monitor for Fon Lanbi Pou Ayiti has taken in 39 people in her small house.

Christianne Adrien, a street vendor, and her husband Ilson, a farmer, took in 18 members of her extended family. "If it were for the money, we would never have done it."

After the earthquake, more than a half million people fled Port au Prince and relocated to rural areas. They, along with thousands of peasants throughout Haiti have spent what little they have on clean water, medical supplies, clothing, bags of rice, and cans of beans for their new neighbors. Peasants have slaughtered precious cows to bring meat to patients at local hospitals.

Christianne continues, "We did this because we wanted them to have a life. If God saved the life of some people from a catastrophe of that size, it's so that we can protect the life of others. People have to live; you have to receive them."

It is here, through fellow Haitians and local grassroots networks that earthquake survivors are receiving the aid that they so desperately need. Resources are tight, but the spirit of sharing stays strong.

Clearly, the earthquake has touched each and every Lambi Fund of Haiti staff member who along with their fellow citizens sustained damages and suffered personal losses. In spite of these hardships, Lambi Fund staff members sprang into action to help address the urgent needs of 43 rural communities impacted greatly by the massive exodus out of the capital.

In the first phase, Lambi Fund focused on the delivery of food and other essentials to rural communities to meet the immediate needs of earthquake survivors who had resettled to these communities.

With the help of regional committees and other partners, the Lambi Fund was able to distribute the following:

- Increase micro-enterprises with additional community microcredit funds - Increase organic, locally-grown food and clean water with expanded sustainable agriculture, reforestation and water access projects - Increase livelihoods with expanded sustainable development projects, such as pig and goat breeding, grain mills and sugar cane mills - Build 880 latrines to prevent spread of disease and increase sanitation in rural areas, as a result of rapidly growing population from IDPs - Distribute 100 wheelchairs to the large number of amputees whose limbs were crushed in the earthquake. - Expand women's programs to address the special needs of women (who are more vulnerable to domestic violence and sexual assault in tent cities but several organized women's groups are standing up for the rights of women and children)

Supporting Policy Advocacy to express the voice of the Haitian people in rebuilding Haiti will be an important component of long-term rebuilding plans. Lambi Fund is committed to taking a leadership role in advocacy by speaking out on behalf of rural communities, by creating strong partnerships with a coalition of like-minded groups working together to rebuild Haiti, and by supporting the needs of women, particularly within the context of the rebuilding effort now underway. As foreign corporations and governments jockey for rebuilding contracts, the Haitian voice has been neglected.

This cannot continue; the voice of the majority must be heard.

In order to incorporate Haitians and their perspectives, Lambi Fund has developed a five point plan for prioritizing rebuilding in Haiti:

National sovereignty. The ownership of rebuilding Haiti must come from the Haitian people. Real change must come from the majority poor. Not from politicians. Not from the elite. And not from foreign governments. Haitians must be the change agents through participatory democracy.

Decentralization. The migration of over 500,000 earthquake survivors from the rubble of Port-au-Prince to rural Haiti offers the opportunity to create a decentralized infrastructure that can lead to regional centers for economic development, better roads, public education, health care, social services and access to potable water and sanitation.

Stimulate local economy. The earthquake offers a unique opportunity for the international community to work in partnership with Haitian peasant groups to increase our capacity to feed the country and support the local economy.

Rebuild Haiti right. In addition to true land reform, Port au Prince and other damaged towns must be rebuilt with disaster resistant building codes that are rigorously monitored. Rebuilding must be done by Haitians, who are desperately in need of a boost in fair and equitable employment opportunities.

Environment must be at the center of restoring Haiti. Deforestation represents one of the greatest threats to Haiti's food security. Restoration of the environment is crucial to sustaining a functioning economy and productive agricultural sector, providing sufficient employment, and recreating natural buffers against inevitable environmental challenges, which include climate change.

Lambi Fund recognizes the critical role that will be played by women and farmers in the rebuilding of Haiti, and will continue to advocate for their inclusion in the creation of a plan and a new vision for Haiti.

‹ 1 ... 81 82 83 84 85 86 87 88 ... 93 ›
WARNING: Javascript is currently disabled or is not available in your browser. GlobalGiving makes extensive use of Javascript and will not function properly with Javascript disabled. Please enable Javascript and refresh this page.