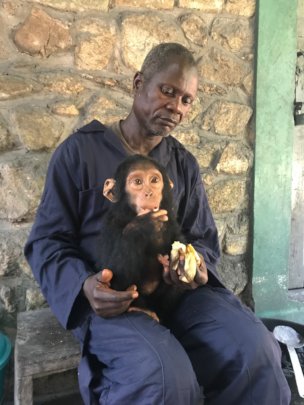 In the past year, a total of five chimpanzee infants and one baboon have been confiscated by ICCN rangers in the northeastern region of DRC. After each confiscation, they were brought to our station in Epulu for immediate care for stabilization before transferring them to Lwiro Primate Sanctuary in Bukavu for long term care.

Recently, with the threat of Ebola in the region, the new protocol is to bring these infants to our station first for a minimum 21-day quarantine period before being transferred to Lwiro. This is to prevent the transfer of the disease to the other animals in their care. The immediate care we provide includes formula, food, medicine to treat any wounds or illnesses and a caretaker that spends time caring for each chimp until the quarantine period passes and transport can be arranged.

Most recently, two chimps were confiscated a few months ago from known Ebola areas. A male chimp from Maiko National Park and a female from the town of Mambasa. Once confiscated, our team immediately went into action to care for these chimps. Mokonzi began caring for the female and Mao began caring for the male. Though we believe them to be close in age, the male is much smaller and lighter in color, possibly due to malnourishment. He also arrived with an unknown eye injury or infection. Both chimps were treated and deemed clear of Ebola, and once they were stabilized, we arranged transport to Lwiro Primate Sanctuary with the help of Anthony Caere, a pilot with Virunga National Park.

In addition to caring for the orphaned infants, we are working with ICCN rangers to increase the patrol efforts to close gold mines, since bushmeat poaching is closely tied with these remote mines in the forest. We have been working with ICCN rangers since our inception in 1987 to close illegal gold mines to protect the rainforest habitat that houses okapi, forest elephants and chimpanzees.

With the increase in patrols and more effective training from ICCN rangers, we expect additional chimps and primates to be confiscated in the coming months and/or years. Because of your support, we are able to assist in the initial stabilizing care and quarantine period for the infants before transferred to their new families at Lwiro. 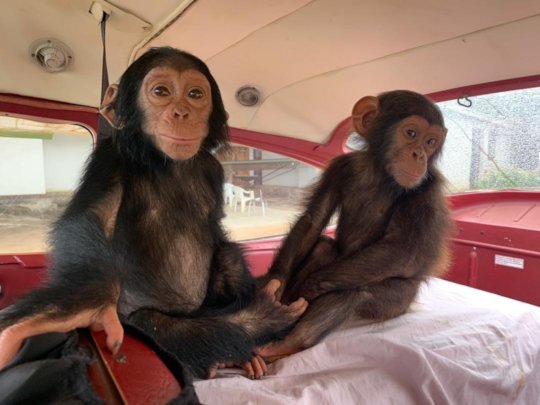 Female and Male chimp flying to Lwiro. A. Caere 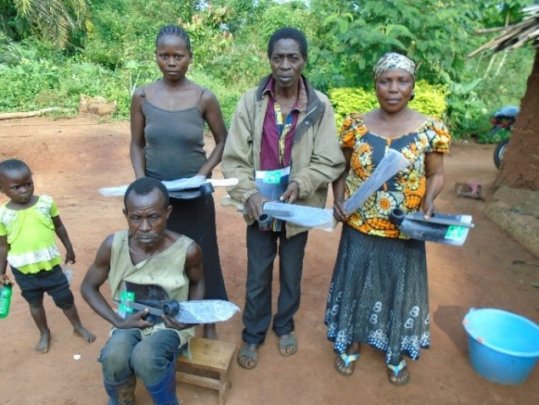 Distribution of farming tools in Biakato

Slash-and-burn farming is the main threat to okapi habitat throughout its range. Okapi need large, undisturbed tracts of lush forest in order to survive and reproduce. To decrease the prevalence of slash-and-burn agriculture within the Okapi Wildlife Reserve (OWR), Okapi Conservation Project provides the tools, supplies and education needed to create a more sustainable farming practices that helps to both extend the life of the soil by up to 10 years and establish food security needed in an area where food access is difficult. By teaching these practices to local communities, we increase their capacity to grow their own food while preventing incursions into critical okapi habitat. With these actions combined, we are protecting okapi habitat. This program is currently hosted in five regions in and around the OWR including Mambasa, Niania, Wamba, Biakato and Epulu.

During this quarter over 23500 seedlings were distributed consisting of over 9700 nitrogen-fixing trees that put nutrients back into the soil, 70 agroforestry trees, nearly 1400 fruit-bearing trees and over 12,400 multi-purpose trees. These seedlings were propagated by seed collected in the region and grown in our OCP nurseries in each of the 5 areas. These sites are monitored by our knowledgable agronomes. In addition to providing seedlings to 870 farmers, OCP staff also distributed much-needed supplementary tools to plant the trees in each area. They donated 38 machetes, 21 hoes and more in order to mend the soil and plant the trees.

By providing these seedlings and tools to the local people, there have been no incursions by farming into critical okapi habitat. This is a testament to the success of the program which provides a direct need for the communities and, in turn, reduces their impact on the surrounding forest.

This longstanding and successful program is only possible with the support of wonderful donors like you! We thank you for your continued support - especially working in such a difficult corner of the world for an animal that is rarely seen. 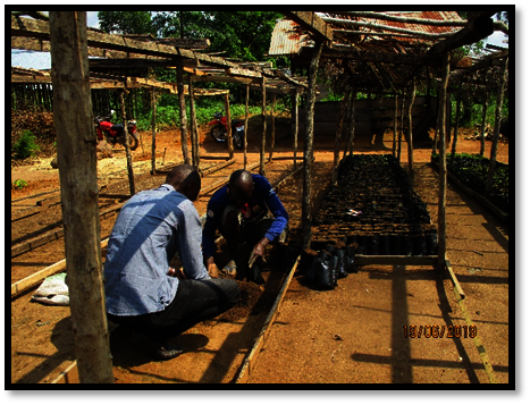 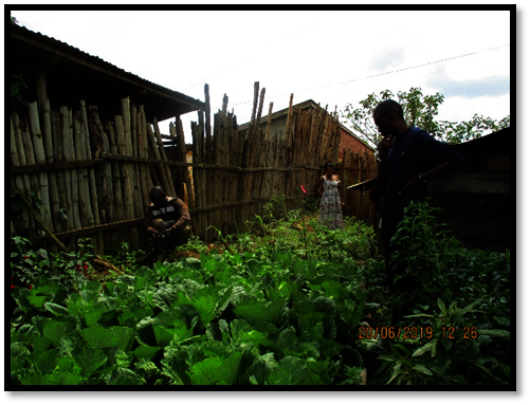 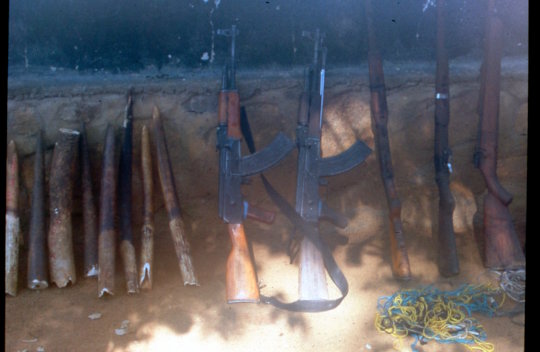 In the first quarter of 2019, an average of 122 ICCN rangers were out working hard in the Okapi Wildlife Reserve (OWR). During this time, they walked a total of 146 patrols and covered a total over 4800 km. They trudged through the dense, thick forest and crossed rivers to cover about 19% of the Reserve. During their patrols, the rangers observed a total of 14 different wildlife species. Some of the fauna they observed were: 6 Okapis, 13 Chimpanzees, 76 Red-tailed monkeys and 15 Grey Parrots, 14 baboons, 1 Buffalo and 15 Black-casqued Hornbills. They also observed Elephant dung piles and footprints in the area.

The rangers patrol the reserve looking for illegal mining, poaching and logging activities. During the first quarter of 2019, illegal mining was at the top of the list with 357 miners removed from the area. Miners on their first offense are peacefully removed from the Reserve and they are educated on how gold mining is illegal in Reserve. If it is a miner's second offense, they are arrested. They found a total of 26 abandoned mining camps and another 30 camps were still in use. Illegal mining cases were followed by 100 cases of poaching with snares, 8-armed poaching cases and 8 cases of illegal logging. The use of snares was a common observation in almost all areas checked by rangers. There were 2678 nylon snares found and 139 mental snares. When snares were found they were either dismantled or collected.  There was a total of 38 arrest made on illegal people in the reserve and 151 people were transferred to justice. During patrols, there were a total of 15 types of confiscated items. Including 249 spades, 99 rounds of ammunition, 10 guns, and 36 machetes. 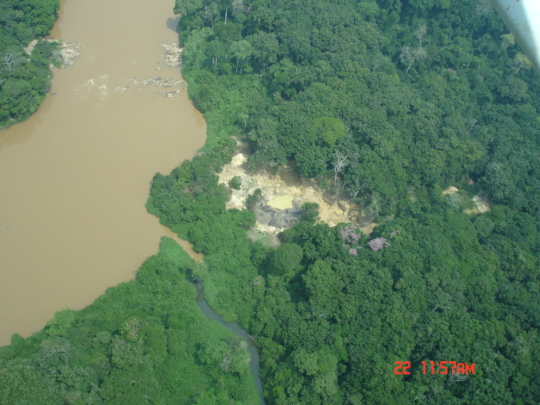 Illegal gold mine from aerial survey