I am confident towards my bright future 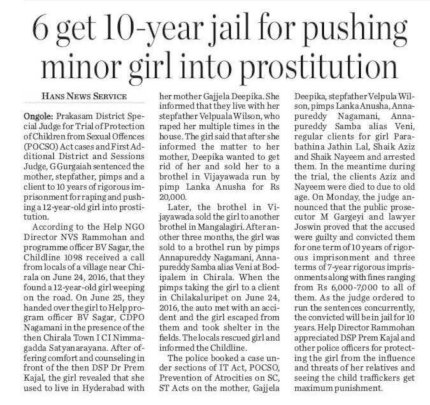 “I delighted that, my mother along with five other traffickers have been penalized with 10 years imprisonment and no bounds to my joy indeed. I live a life of dignity with courage and confidence hereafter that made me to decide to work for the welfare and protection of rescued victims of trafficking with the motivation of HELP organisation. I cordially extend my gratitude and my hearty thanks to HELP” - Lakshmi

12 Yrs old Lakshmi (name changed) was forced to enter in to prostitution and was sold to brothel house at Vijayawada by her own mother Deepika for Rs. 20,000/- in January 2016. Later after some time, she sold to a brothel house at Mangalagiri and again to a brothel house at Bodipalem in Chirala after 10 days. It is so pathetic to say that, she sold to a brothel house at Chilakaluripet immediately within 10 days from Chirala. The girl was escaped from an auto when she was shifting from Chirala (Prakasam Dist) to Chilakaluripet (Guntur Dist) on 24th Jun 2016. She reached Chirala railway station where an unknown person has observed the girl who looks so distressed and feeling some insecurity. He has taken to his house and got to know the issue. He informed to CHILDLINE 1098 who have bounded to his house and rescued the girl. They have produced her before Child Welfare Committee. After careful examination of the issue and recording the statement of the girl, a case has been booked in Chirala Police Station. The girl has been referred to HELP’s Asha Sadan Rehabilitation home for rehabilitation including basic needs, safe shelter, counseling and other care and protection services.

During her stay at Asha Sadan, as part of counseling by home staff, the girl revealed entire story about how she has been pushed in to flesh trade that is too by her own biological mother. The information by the girl has been conveyed to the CWC who recorded the statement of the girl under Sec 164 Cr.PC through Mrs. Prema Kajal – DSP of Chirala before the Magistrate. As a result, the mother of the girl, two traffickers, two brothel owners along with two customers identified by the girl have been taken in to the custody of the police and arrested under POCSO, IPC and ITPA Acts.

The girl was receiving trainings in preparing bakery items and Jute bags making and without caring the pressure from her family members has deposed her witness in Hon’ble court of law against her mother other traffickers and also customers. As a result, on 17th Jun 2019, the court has disposed the case with conviction to her mother along with two other traffickers with 10 year rigorous imprisonment and 7 years imprisonment to customers and brothel owners.

The girl stated that, “I have deposed witness even against my mother along with other perpetrators involved in the crime as I was facilitated with enough care and protection through Asha Sadan since 3 years. I thank to HELP organisation & staff of Asha sadan people that protecting, inducing self confidence and moral support to innocent girls who fall prey to the traffickers and other such criminals and are losing their lives like me. Hence, I decided to work for the girls who are at risk of trafficking like me with the motivation of HELP hereafter”.

It's really an expedition from dusk to dawn for me 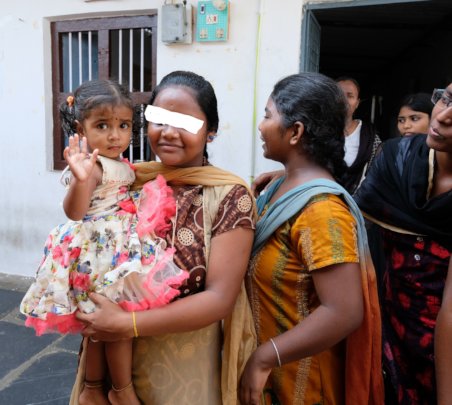 from hopeless to new hope

At the outset, we would like to extend our cordial gratitude for your generosity that prop up the distressed lives of individuals towards a dignity of life who indeed felt “It’s really an expedition from dusk to dawn for me” says Divya*.

Divya wish to shape her future with the helping hands of the people like you where she could cope up with the challenges and pave a way forward with a spirit of optimistic hope towards fulfilling her dreams. She wish to utilize the resources auspiciously offered by you and make her best efforts to stand on her own with courage and confidence.

Divya never expected that she entangles in such a vicious cycle believing the false promises by him who finally through in to a nebulous fate without her knowledge and conscience. Further, she never expected that her destiny demands her to sell her body for sustaining herself and her child who indeed innocent with blossom childhood.

She married at fourteen and her husband left her after five years when she given birth to her second child. No choice to be the bread winner for her children. One of the tenants named Babitha at Chilakaluripet influenced Divya to make money investing her body and earn to keep concern over her children and her life.

After sometime, Divya rescued from brothel and referred to our HELP run Asha Sadan Rehabilitation Home for basic needs, trauma counseling and to learn skill training as part of rehabilitation services. She is trained in making jute bags in home that motivated her to leave out of the sex work. Now, she could enjoy the joyful days she is being spent in shelter home and accelerating a step forward towards a bright light of her life because of your immense support.

Divya expressed her deep hearted gratitude and wish to remain so grateful to GlobalGiving with its donor who supported her for a great positive change in her life.

We will let you know the further progress. Thanks a lot for your SUPPORT in changing lives. 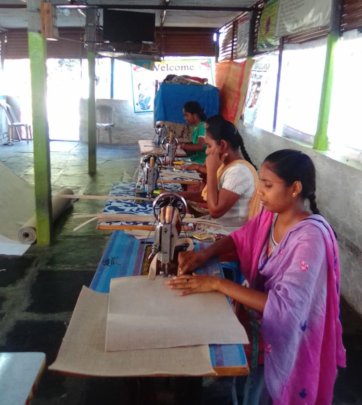 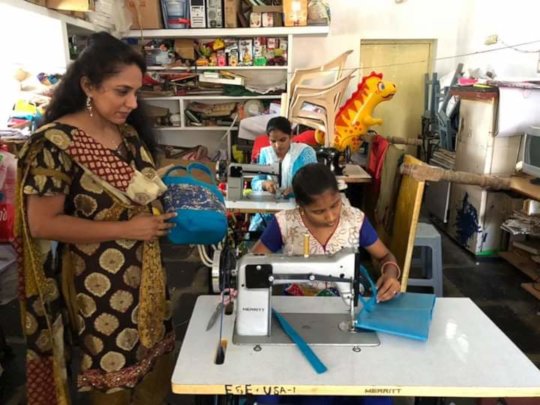 “Many days of my life have already gone by,” says Madhavi. “But now I want to do good work in the time that’s remaining.”

18 year old Madhavi was married off to a much older man at her age 15, who already had a wife. She tried her best to adjust into her “so called” marital life, but failed. She went back to her father, who refused to take her in. She came back to the nearest Railway Station, where she met a decent looking stranger, who upon hearing her pathetic story, offered her a job as “domestic help” in Madanapalli. Madhavi had no choice, she agreed to the proposal. Once in Madanapalli, the man sold Madhavi to the flesh traders. She was subjected to various forms of sexual violence, over there. However, one day a client of her, who had sympathies for her, helped her to escape from the clutches of her “madam”. She was taken to a Police Station and was sent to Asha Sadan eventually under judicial orders. She had both physical and mental health problems, it took her a considerable period of time, to come back to normalcy. She had learnt “embroidery” & “Jute Bag making” and looks forward to a decent future……

I always remain thankful to HELP – Asadan and it’s supporters for giving me a new life of joy and hope in my life but now I want to do good work in time that’s remaining. Thanks so much – Madhavi