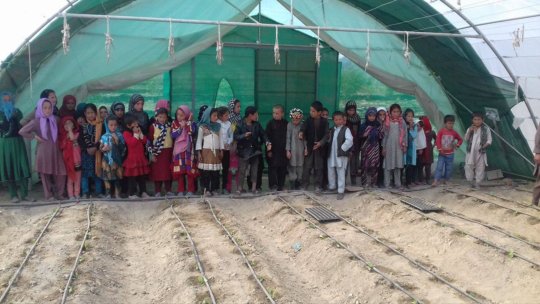 The biggest news is that earlier this year the Baharak Children’s Garden absorbed 50 displaced children!

As we reported previously, the Taliban invaded Badakhashan in 2015 and have been active across the region ever since. They took a village not far from Baharak a few months ago and 50 children and their mothers fled for safety at our Children’s Garden.

We are so proud that our local manager took them in!

The World Food Program (German-funded division) then stepped up to create a special refugee camp but WE now feed, educate and entertain these children three days a week. The food comes from our chicken eggs (100 egg-laying hens), produce and milk from two cows and honey from the local market.

Great news, too, from Faizabad. The woman’s center with which we started to build up a relationship (see attached photo of warm clothing and footwear distribution over the winter) is now being funded to make uniforms for over 150 orphaned children who currently go to school in rags.

We are so proud to play a liaison role between the woman’s vocational center and Faizabad’s largest orphanage. We are now creating a vegetable garden and greenhouse next to the orphanage. We are doing this because the metrics at our projects worldwide tell us that children can’t grow without nutritious food and our children’s gardens also give them the emotional support they are also lacking.

More big news — we are excited to add one of the world’s greatest farmers to our team.

We knew from the very beginning that we would confront different challenges with our Children’s Gardens in different parts of the world, especially Afghanistan.

Beth, along with her family, owns and operates Goodfoot Farm, a small, diversified market farm whose mission is to provide unconventionally grown food for the local community. The farm takes a systematic approach in an effort to balance food production with responsibility for the local forest, field and river life. The farm is certified organic and Demeter certified Biodynamic® and works hard to minimize the use of off-farm and petroleum dependent inputs. Rather, the farm practices a method of regenerative agriculture that strives to emulate a natural system.  Fundamental to the success of the production system is the integration of animals for fertility and weed management, the selection of crops and cultivars for pest and disease control and the practice of “farmscaping” which provides habitat for native pollinators and natural predators of pests.

Along with growing food for people, Beth engages in on-farm research with scientists from Oregon State University to evaluate crop varieties for agronomic and culinary traits within organic production systems.   She also collaborates with the OSU Center for Small Farms and Community Food Systems to identify areas for program development and support for small farmers.

Beth received her PhD in Botany and Plant Pathology from Oregon State University.

Beth met our director a few years ago when Rick was buying Beth’s blueberries at a farmer’s market in Corvallis. Rick knew immediately that he was talking to a genius.

We are deeply honored to have Beth on our team as we expand our Children’s Gardens from Baharak to other areas in Afghanistan and around the world where children need a nutritional and emotional boost. 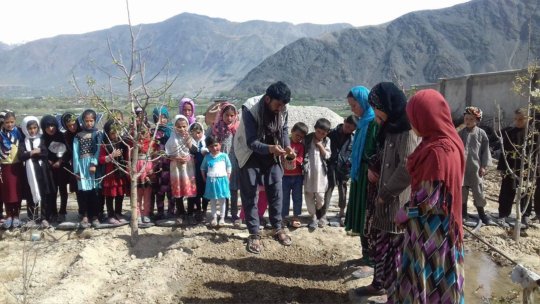 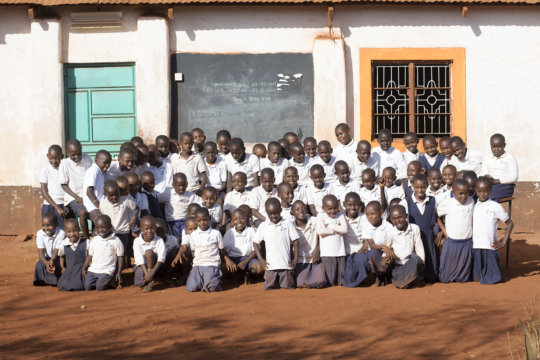 Our Chidren's Gardens are working!  We have just received updated and comparative metrics for our original Children's Garden sites in Mtito Andei, Kenya and the results are exciting!

Kenyan primary schools are governed by the Kenyan Ministry of Education, which issues the Kenyan Certificate of Primary Education (KCPE).  This certificate is awarded to students who have completed eight years of primary education and passed the national KCPE exam.  This exam tests students on their knowledge of all main areas of primary education, including English, Math, Kiswahili, Science, Social Studies and Religious Studies.  The exam is administered during the month of November.  It takes a week to complete and students will sit from 8-4 each day of the exam.

According to recent score results, our Matulani kids averaged an impressive score of 272!  The average for boys was 269 and for girls it was 275.  This score puts Matulani students in the position of 4th ranked out of all of the zone's schools.  But what is especially important about this rank is that the three schools which scored better are ALL boarding schools.  Matulani students don't have the advantage of the added contact time in boarding schools.  This means that Matulani is the top ranked public day school in the entire zone!

What's more, this new data shows that Matulani's scores have been climbing since the launch of our Global Roots Children's Garden.  The student average score in 2012 was 241.  The following year that score was 243.  In 2014 they jumped up to 254 and in 2016 they hit 262.  And we plan to keep that score rising!

Thank you so much to our donors who continue to support us!  Know that your donations are making a measurable difference in the lives of rural Kenyan children! 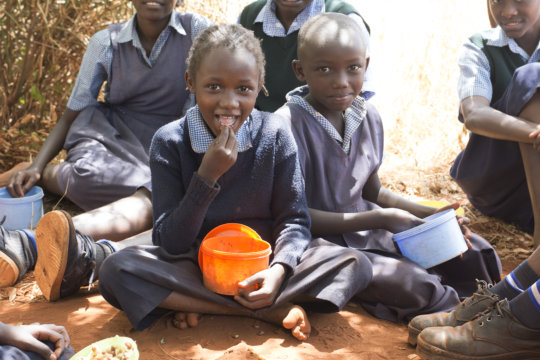 Eating meals from the children's garden! 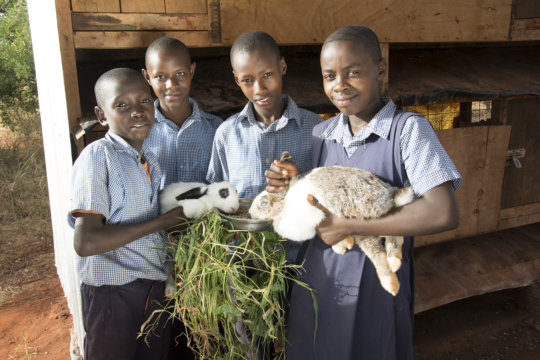 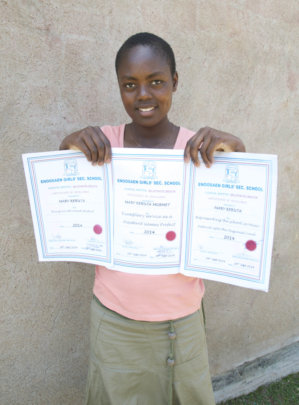 Our fight Against Female Genital Mutilation Rages On

First for the good news: We wired $7,100 just three days ago to Global Roots transparency manager (AK) in Nairobi to pay all past due boarding school fees for the 72 girls we support.

We would like to thank all Global Roots donors at GlobalGiving and We Giving (Nike) for your support.

Had we not gotten this chunk of coin over to Kenya in time, most of our girls would have been evicted from school and sent home.

Once back at their birth “manyatta” (village in Maasai) they would have been subjected to Female Genital Mutilation and sold for cattle to the highest bidder. Ten percent of these 72 girls would have died by the age of 16 due to hemorrhaging while giving birth and the rest would live as slaves for the rest of their lives and suffer a host of diseases related to their initial genital cutting.

Thank you for helping us save lives and keep these girls in school.

Our transparency officer AK will make a special trip from Nairobi to visit each and every Maasai girl we support at each boarding school. Anthony has been charged with the task to make sure all of our girls are performing at a high academic level and that each are safe from the constant threat of abduction by their families.

AK delivers feminine products to each girl as well as other items they don’t have the spending money for. Keep in mind that most children who attend boarding school in Kenya are sent spending money by their loving parents.

Anthony will also spend time bridging with the admin underlings of the schoolmaster at each school so that we receive word whenever a schoolmaster gets overly anxious about fee payments.

Anthony will also continue to put pressure on the Kenyan national and regional governmental agencies to protect the rights of the girls we support and eventually pay for their school fees.

2-Forced marriage of minors is illegal in Kenya

3-The sale of children into marriage is illegal in Kenya

Mary K. is graduating — a note to Mary!

“Congrats Mary! Along with three other extremely brave and smart Maasai girls, you are the first of the Maasai 72 to graduate from high school.

We are happy to announce that “PM”, an 84 year old widow in Portland, Oregon, has offered to contribute 1K a year to your post secondary education. Furthermore, our executive director is reaching out to college deans across the USA for sponsorship.

We believe in you and we know you will one day be the lawyer who will bring an end to FGM among the Maasai for all time.

We love you Mary. You are our inspiration.”

Attached is a photo of our director with Mary in Kenya. Mary is holding a “best Pupil” award from her school.

I had two lengthy chats with Carol this afternoon. She has not been greatly successful in raising school fees on her own and so far has only paid US$ 600 towards the debt at two schools.

For another school, Sossion high school, she has applied for a bursary cheque from the county government for  US$ 1,800 which will cover the entire year's fees. She is confident that the application will be successful.

As usual payment will be made directly to the schools. The school with the more problematic administration, Christ The King will be allocated at least US$ 1,000 as will Enoosaen. The rest of the money will be split amongst the other schools, including around US$ 700 to the Father Kaiser school in Transmara, that also hosts a substantial number of girls.

The total figure of the fees outstanding for this year has gone up by US$ 1,000 to reflect the balance unpaid at Sossio school. As Carole was unable to present the bursary cheque as promised, the school headmaster has called upon Global Roots to settle the amount.

You are quite right. It has come to light that not all of the girls are under the threat of FGM and indeed some may not even be Maasai.

This year we have been successful in compiling a more updated roster of the girls supported by Global Roots. But there is plenty more to be done.

I learnt over the last school holiday that Carol dispatched some of the girls back to stay with their parents and relatives as she couldn't afford to feed them at her home. This obviously proves that not all the girls are at risk of being married off and that their predicament is basically lack of finances to go to school. We will certainly have our work cut out now to determine which girls need to be prioritised for assistance.

I am sure Femnet have some sort of wait list of their own. In any case they would want to carry out their own due diligence to determine which girls to support. I also suspect that like many other charities and NGOs they face funding challenges. However it will do no harm to ask if they could take some of girls under their wing.

With the schools closed,  it may be a challenge to get Mary's transcripts quickly, but I will call the headmistress for assistance.

Here is a link to the BBC piece: http://www.bbc.co.uk/ethics/femalecircumcision/femalecirc_1.shtml 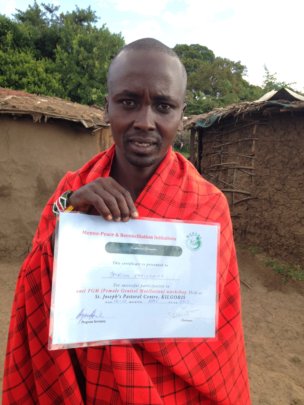 a future leader of our anti FGM branding initiativ