Typhoid and Malaria strikes at the same time

Just when things were starting to stabilize at our Rescue Center for girls threatemened by Female Genital Mutilation (FGM) in Kenya, trajedy struck.

One of our girls (Nelly) and the head of the center itself (MK), were struck down simultaneously by both Typhoid and Malaria.

Fortunately, thanks to funds saved from past GlobalGiving donations, we were able to pay all costs of the emergency. They had to be transported from Lolgorian to the much larger town of Kisii and stay in a hospital there for several days.

Both women were severely ill one month ago but they each doing better now. Mary has made a full recovery already but Nelly is still very weak and we are keeping her off of her feet.

We have attached a photo of Nelly receiving medical attention in Kisii, Kenya and the receipts that we require to make sure emergency funds are spent on target.

MK and Nelly wanted me to be sure to thank GlobalGiving donors for your support!

It is easy to feel alone during Covid -- but it gets much worse when you have no money and you are sick.

MK has finally received her teaching certificates and will soon be assigned a teaching post somewhere in Kenya.

Fortunately, we will have time to find a replacement teacher for MK because she currrently serves as both house mother and headmaster at our rescue center.

We have attached a photo of MK teaching scicence to one of the students at our rescue center.

Now that she is healthy, MK can travel next week to meet with the elders of a village where FGM is still commontly practiced.

We were forced to cancel meetings like this a few months ago when COVID reared its ugly head.

MK's main goal will be to set up a visit to the village by Silvia, another of our college graduates. Silvia will share her life story with young girls in the village so that they can understand that they have the right to stay in school and become whateer they want to be. Silvia will make it clear during her presentation that what she did was not easy.

In Silvia'se case, she had to run away from home to find help. Fortunately, she found a woman who was supported by Global Roots and GlobalGiving. The woman, protected Silvia until Global Roots started to pay for her boarding school fees and, later, college.

Global Roots paid for all of Silva's education expenses and she is now a shining example of what can happen to a young Maasai girl who refuses to accept the brutal tradition of FGM and the lifetime of pain and slavery it promises.

We believe parents will be shocked when they learn what Silvia's starting salary will be when she starts as an IT developer at a security surveillance company in Nairobi next month!

Only by showing parents the true value of education can FGM be stopped!

Thank you for you ongoing support. We won't stop until FGM is 100% extinguished.

studying during Covid19 at the rescue center 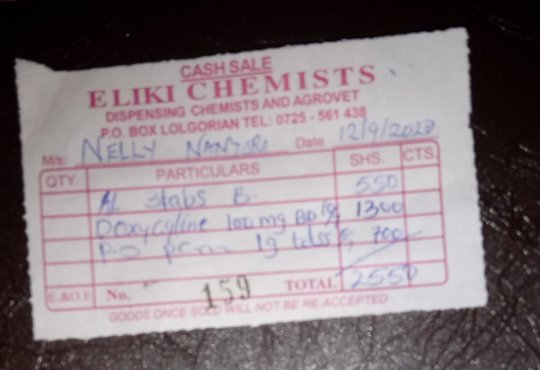 receipts for due diligence/transparency
May 5, 2020

Nelly and Mary at our Safe House

We are so proud to announce that Global Roots sent a team into the field to protec, Nelly, a 16-year-old Maasai schoolgirl, from Female Genital Mutilation, or FGM.

Like all schoolchildren in Kenya and in most countries around the world, Nelly was sent home from school because of Covid19 last month.

Fortunately, Nelly knew about the existence and location of our SAFE HOUSE FOR MAASAI GIRLS thanks to a visit our auditing team paid to her school six months ago.

Nelly is now living in a house that is managed by Mary Keruta, a Maasai woman who courageously ran away from FGM over ten years ago.

See attached photo of Mary and Nelly. Nelly is wearing a new red dress we bought for her because all she had when she arrived was her school uniform.

We would like to thank GlobalGiving donors for providing the funds we need to keep our girls safe.

We are now raising funds to add a wing to our Safe House in rural Kenya. Our house is not far from Kilgoris – the site of the original safe house that we first started to support ten years ago.

Thank you for your help!

Sponsor your own schoolgirl!!

It costs just $500 a year to keep a Maasai girl safe and in boarding school.

Mary will in turn set up a video session between you and the young girl you will sponsor.

!00% of your $500 will go directly to boarding school fees and the personal needs of yourn schoolgirl!

The rescue of Margaret 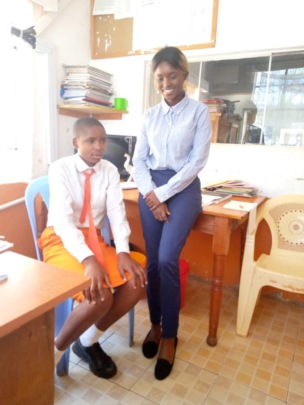 Global Roots has been protecting young Maasai girls from Female Genital Mutiliation or FGM since 2008.

In the beginning we helped a brave Maasai woman protect 56 girls who all ran away from their villages on the night they were to be cut and sold into marriage. The girls ranged in age from 8 to 13. Each of the girls had heard about our hero’s “safe house” in the Kenyan town of Kilgoris so they ran to her, one by one. These girls are the bravest girls in the world. They ran away from everything they had ever known so that they could stay in school and avoid the horrific human rights crime of FGM.

The number of girls protected by our local hero increased to 72 by the year 2013. We called them the Maasai 72 and we provided the funds that would keep them all safe in boarding school.

We reached out to GlobalGiving in around 2014 and this led us to you. Thank you for your ongoing donations!

Today, we are happy to report that a recent Global Roots audit of the girls remaining in our program led to the rescue of a young Maasai girl whose family had every intention of taking her from school and subjecting her to FGM.

The girl, who we will call Margaret, is shown in the attached photo with Vivian, lead program auditor of our Maasai school-girl program.

We learned during our audit that someone had been paying for Margaret’s boarding school. We were confused by this but, even though her expenses seemed to be covered by family, we kept Margaret in our warning net.

It turns out that Margaret's 74-year-old grandmother is the one who has been paying for Margaret’s school fees. Recently the grandma, whose identity must remain anonymous, was no longer able to help out. This gave other members of Margaret's family the opportunity to come for her. Keep in mind that the sale of a young Maasai girl into marriage carries a great profit in Kenya -- and the profit is maximized if the girl has been subjectd to FGM.

Fortunately, an assistant principal kept the name and number of Saruni M, the rescue operations manager in Kenya for Global Roots. Leaving his number at every school he visits is Global Roots policy. It’s how we have built a warning net that informs us whenever a Maasai girl in our network is threatened.

When Saruni got the call, he immediately emailed the head of Global Roots operations in the USA, Rick Montgomery. Rick then gave Saruni the authority he needed, as well as two other Kenyan managers, to research Margaret’s family situation. When he could confirm that Margaret was truly in danger, Rick tasked Anthony Kokondu of Global Roots in Nairobi to procure the bank account and routing number of Margaret’s school. Funds were wired immediately and no outsider was allowed to talke Margaret away.

Next week, Saruni and his wife Mary (one of the original girls protected by Global Roots) will return to Margaret’s school to check her. Saruni will collect a receipt from the school’s principal for due diligence and transparency purposes. Mary will spend time with Margaret and let her know that she is not alone and that we are with her.

We would like to thank everyone in Kenya who made this rescue possible as well as our esteemed donors at GlobalGiving!

Stay tuned for our next post that will include a link to a video that tells the story of how three of the original Maasai 72 are now fully self-actualized college graduates, including Silvia (photo attached).

1 2 3 4 5 6 7 8 9 ... 14 ›
WARNING: Javascript is currently disabled or is not available in your browser. GlobalGiving makes extensive use of Javascript and will not function properly with Javascript disabled. Please enable Javascript and refresh this page.