There are currently 21 students in Transition Class plus two new boys who just joined the class from the streets at the end of September. The children continue to work towards returning to government primary schools at the beginning of the new school year in January. This year's class has proven to be very hard working, they are excited about returning to school and determined to work hard towards that goal.

One pupil is Diana Mbinya who joined Transition Class this year, she is eleven years old. She had been living with her mother and brother until two years a ago when her mother was imprisoned. Her Grandmother stepped in to care for them both and for a while Diana continued in primary school. Eventually the Grandmother could no longer afford the school fees and Diana was sent home from school.

Later, her Grandmother brought Diana to Turning Point and she joined transition class immediately to catch up with the schooling she missed. Diana will return to primary school in January. Diana is a dedicated student who aims to get a good job so she can help her mother, she dreams of being a Doctor. 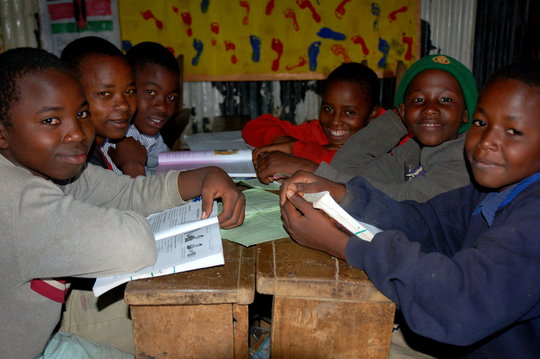 Kids in Transition: Charles Rubia is first on left

We call our specialist educational classes for street kids Transition Class. This progress report was written by Margaret, one of the teachers who run run this class.

Transition Class Report In transition class this term we have 20 pupils, nine girls and eleven boys. Ten of them came from our the Turning Point satellite project in Kianda. In January this year, 17 children went back to school, making way for a second intake.

This brought the number to 32 pupils, 20 of these children were ready to start back at school at the beginning of the second term, so they graduated on to government schools at this time to reduce the class size in transition.

It has been a challenge this year with new pupils joining in the middle of the year, some of whom had been out of school for over a year. It is a challenge to help the new pupils catch up with the syllabus without dragging the others who were in class from the beginning of the year. Despite the challenges, God gives me enough grace to endure everything.

Through the transition class the children gain self-worth that had been lost before they joined us. They also make friends who are always available to talk with them.

I am so happy that most of the children open up, get to know more about education and are so willing to study and proper. As a teacher, I am so proud to hear the progress of children from transition class. It gives me a bigger heart to accommodate more children and press on in the work that the Lord has laid in my heart for the good of the children.

Charles is 14 years old, he has two brothers and lives with his mother. His father deserted them due to alcoholism. His mother earns money by washing clothes. Charles had reached class seven in school but he dropped out because at times he would go to bed without food so he chose the streets as a better option.

He is so happy at Turning Point because he knows that he can't go without a meal. During the week, he is sure of getting two meals a day. He is also happy for the education he is getting in transition class for he knows that one day he will be a better person. He wants to be a lawyer so that he can deal with parents who neglect their families. He doesn't want what happened to him to happen to someone else.

‹ 1 ... 36 37 38 39 40 41 42 43 44
WARNING: Javascript is currently disabled or is not available in your browser. GlobalGiving makes extensive use of Javascript and will not function properly with Javascript disabled. Please enable Javascript and refresh this page.