Looking back & learning as we move forward 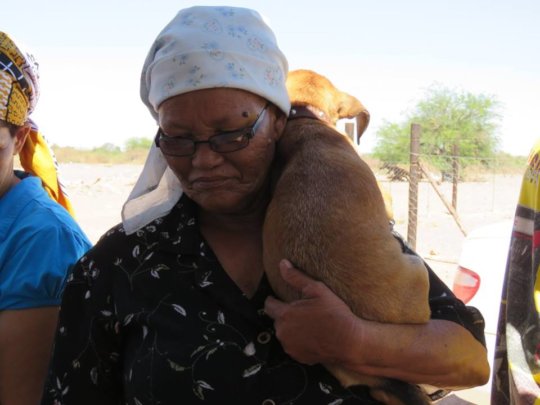 Pup and owner at an HAH-Mobile clinic

To better understand our partners' needs and to provide that information to you, our supporters, we (AKI) always talking to our partners about their daily work, their challenges, their goals. But at the end of 2017, we decided to formalize that communication and asked our partners a set of questions: We told them to spend some time on these, talk to their staff, volunteers, supporters, and to us to help frame the answers.

As Have A Heart-Mobile supporters, I thought you'd be interested in reading HAH's responses:

1. In thinking about the upcoming 5 years, how do you envision your organization and programs?

Our main goal/direction will remain spay/neuter, as well as basic medical services for township animals in Namibia's rural areas and education for pet owners. The long term goal is to grow and offer our services to more and more animals in need! We are currently on the road for on average for one week a month, and in 2018 we will have for the first time Dr. Maya doing follow up visits and treatments in separate trips. During one spay day we are able to operate an average number of 25 animals, this costs us on average N$ 13,250 (US$ 1049.50) per spay day for 20 dogs and 5 cats. We spend N$ 550 (US$ 43.50) per dog and N$ 450 (US$ 35.60) per cat for the sterilisation operation, parasite treatment, vitamin injection and vaccination. Additionally, on an average spay day we spend US$ 20 – 50 on basic medial/emergency care, this might be used on dogs, cats horses or donkeys. The Mobile Animal Clinic is rented by Have a Heart for the spay days and we only have to pay for the material needed as the running costs of the clinic (e.g. petrol, salary) are covered by the Lafrenz Trust and accommodation during the trips are mainly sponsored, so 100 % of AKI donations are spent directly on medical and sterilisations costs.

(a) Currently, what are your greatest challenges?

Our biggest challenge is the distance we need to travel between townships in Namibia and with that the amount of time we “loose” by being on the road. For example to travel to Katima Mulilo we have to drive over 1,200 kilometers. On the long term we will need a second team stationed in the North or in the very far future even full time teams for the spay/neuter service, but we are not yet ready to plan something like this.

(b) In thinking about the upcoming 5 years, what are the main constraints to achieving your vision?

Our main constraints to grow and/or achieve or vision of being the first no kill country will be money, time and staff. Regarding money we will keep on fundraising, trying to look into different directions. Due to Namibia being one of the countries worldwide with the lowest population densities, professional staff are often hard to find. We have big hopes for the current Vet Students at Namibia University. From next year every Vet student has to travel with Dr. Baines' Mobile Animal Clinic during spay days. The first year vet students will finish at the end of 2019, and in case one of the students shows a great interest in running his/her own mobile clinic for spay/neuter service in under-served areas, we will of course try to get financial support for this.

3. What do you think your organization does particularly well?

We have great contact to the less fortunate communities; pet owners all over Namibia understand the advantages of spay/neuter and many wait for hours to have their animal sterilised or helped by us. We get often asked to stay longer, come back more often and go to several more towns.  However, unfortunately in most towns we have to send many people looking for help, away and ask to come back next time. This feedback from the community shows us that we are on the right way! The demand is always higher than we are able to do...

4. In what areas do you think your organization needs to improve?

Thank you very much to our AKI-HAH-Mobile project supporters for helping HAH-Mobile have a successful 2017. We hope that we can count on your support during 2018 as we continue to work together to make Namibia the 1st No Kill Country! 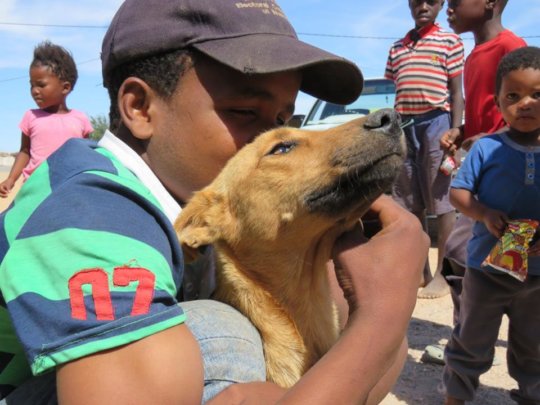 1 of many well cared for dogs at an HAH clinic 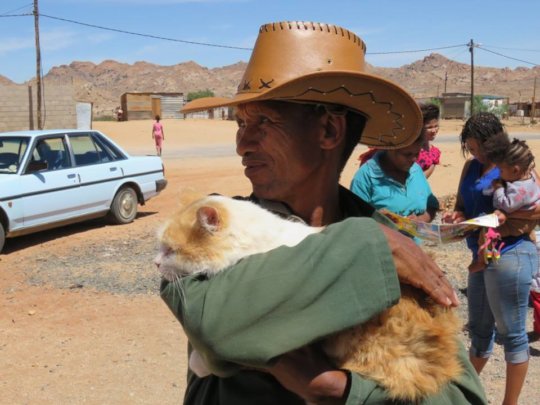 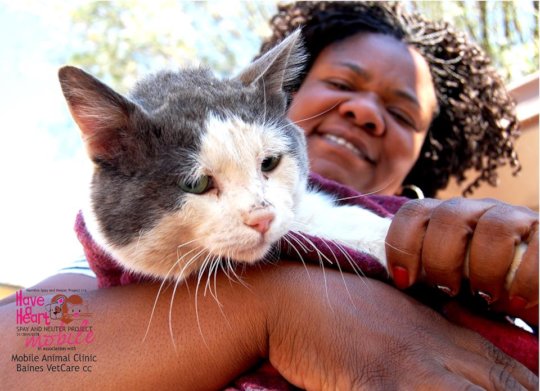 Another kitty spayed with AKI $ 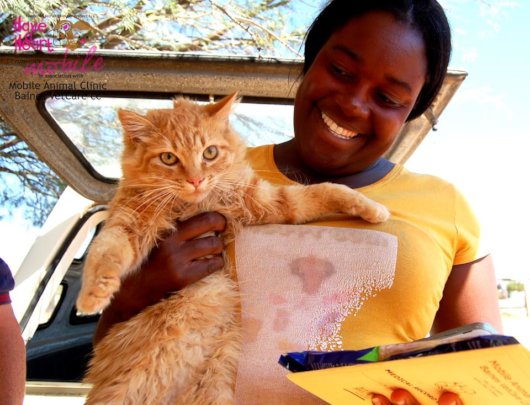 Another lucky kitty spayed at an HAH clinic 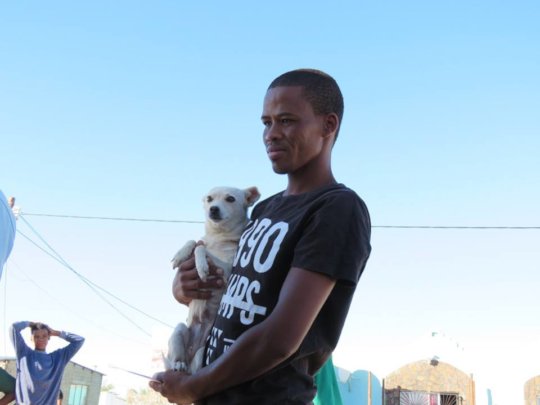 A dog at an HAH clinic 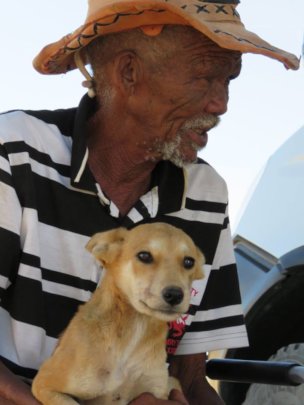 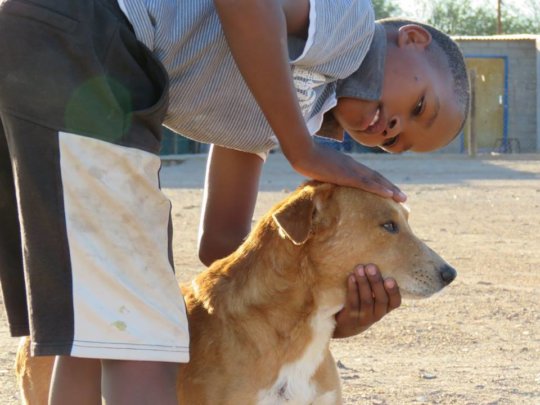 A much-loved dog at an HAH clinic 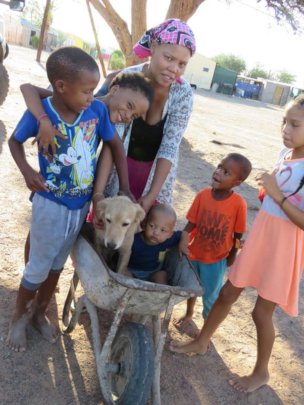 A great way to travel to an HAH-Mobile clinic! 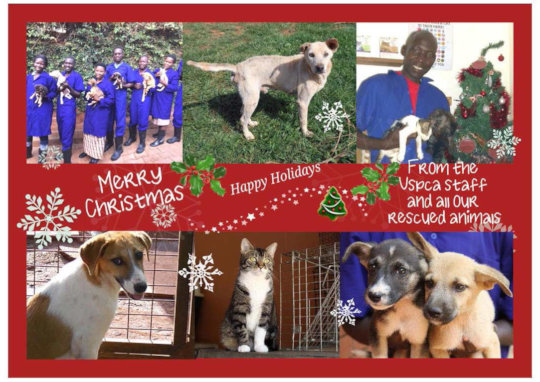 Happy Holidays from the USPCA & AKI

Many of you know Alex Ochieng, the Manager of the Uganda SPCA Haven. If you know Alex, you know he's an animal hero. Even if you don't personally know Alex, you may know the extent he goes to to rescue cats and dogs (recently he also rescued an owl). And if you're not aware yet of Alex's heroics, after you read this, you will be (pictures of all rescues are below).

After receiving a call in early October about a puppy who had fallen into a latrine, Alex grabbed his tools and went off to Mukono. Mrs. Margret, who had called the USPCA, told Alex that the puppy had been stuck in the latrine for 1 1/2 months!!!! The family had been throwing food down the hole every day. It took Alex 2 1/2 hours to get the puppy out. He brought her, named Vodka, to The Haven, where she would be safer and well cared for.  Better yet, Vodka was adopted!

Early on October 12, a USPCA friend called about a baby owl, who had fallen from the nest over night, got caught in an overhead wire, was able to disentagle himself, but fell down onto a roof. Alex rescued the owl, brought him to the vet, who didn't find any injuries, so he returned the owl back to the nest.

Alex rescued a little boy dog in early October, when he saw some kids had tied him to a rope and were pulling him down the street. He was full of ticks and fleas-who knows what these kids had in mind. But Alex talked to them and explained why he was taking the puppy to The Haven.

At the end of October, the USPCA received a call about a dog stuck in a sack! Really! Alex found the dog inside a bag, was able to release her, and brought her to The Haven, so she could recover from the trauma.

On November 9, Alex was driving to Nsambya to inspect a home before approving a family for adoption, when he spotted the tiniest kitten crossing a busy street. Somehow the kitty managed to avoid the 8 tires of a truck! Alex pulled over, made his way through very busy traffic and scooped up the kitty, who went to a foster home, where he could get the good, personal care he needed.

On November 14, Alex had told us that he thought he wasn't able to move because of the flu, dry cough, and a really bad headache.  But he received a call about a kitty that had been stuck on the top of a wall for 3 days and off Alex went!  He needed a ladder to reach the kitty, but he did reach him, got him down from the wall, and brought him back to The Haven.

About 1 year ago, Alex had run into a similar situation: a cat stuck in razor wire. On October 20, it happened again. When Alex got the call, he packed up his rescue tools (including the animal handling gloves donated by AKI), he extricated the kitty, who was pregnant, and brought her to the USPCA clinic to be checked out, and then for recovery at The Haven.

Imagine....a larger, more accommodating Haven....for Alex to manage, for a better environment for rescued cats and dogs, for Ugandans and other Africans to learn about animal care and sheltering. We need your help to make this happen, let's do it for Alex!

The land that we mentioned in the last update is still available, we're still hoping to be able to purchase it. Besides this GlobalGiving fundraiser, the South African Womens Organization (in Kampala) is raising money and as of today, has raised almost US$4000! We're getting there!!!

Thank you for your support. We are so grateful for your help. All the best to you in 2018! 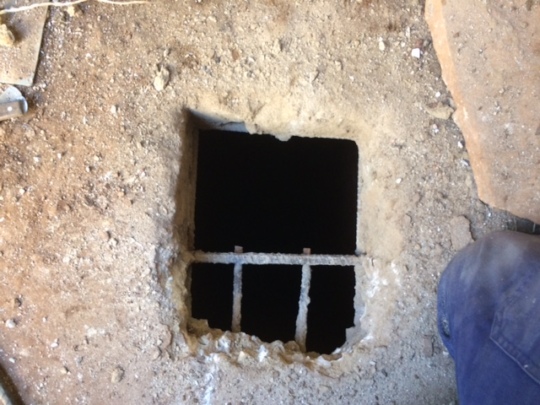 Vodka was stuck down this latrine hole 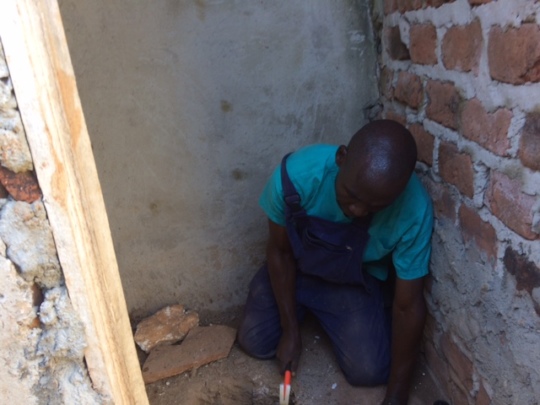 Alex made a lasso & rescued Vodka from the latrine 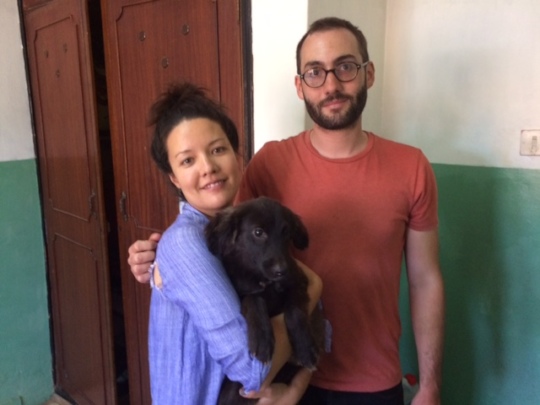 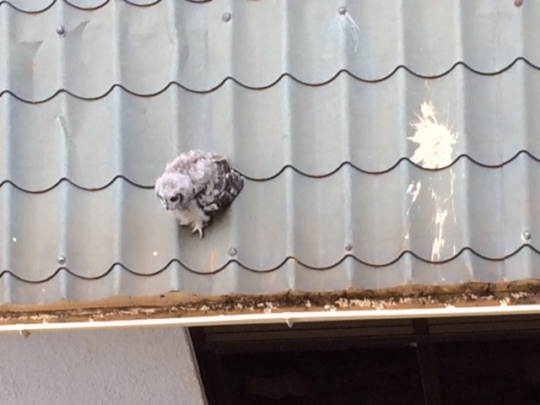 Owl rescued, he fell from his nest, no injuries! 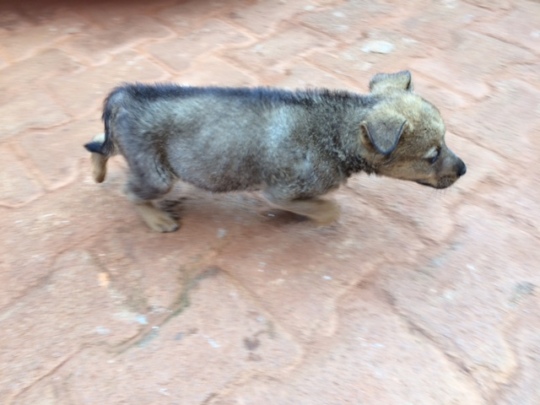 Kids were pulling this puppy with a rope 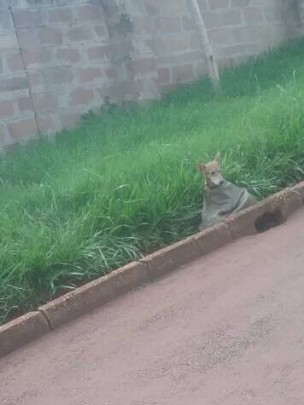 Dog was rescued, stuck in a sack 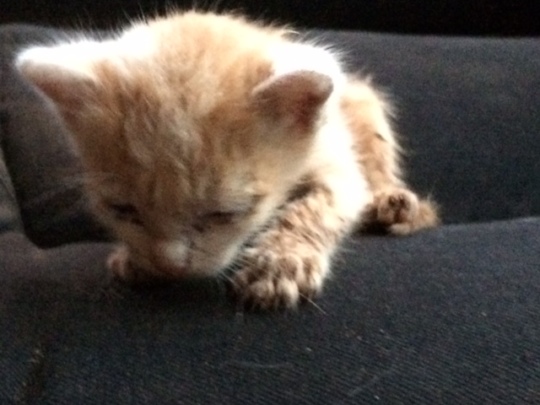 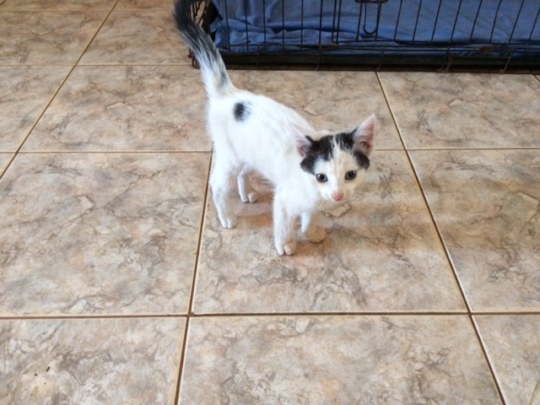 Alex was so sick, but still rescued this kitty 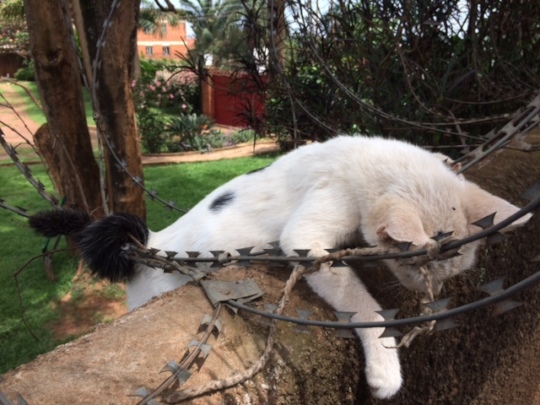 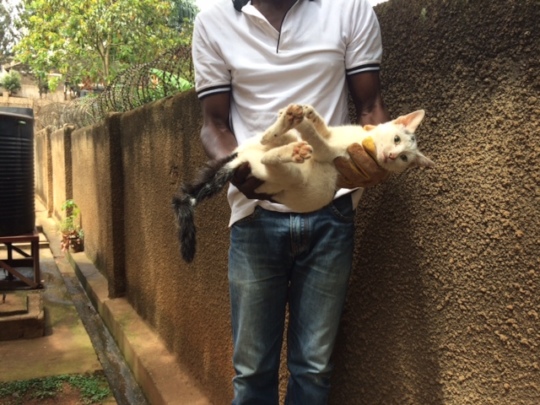 Alex got this kitty out of razor wire

Have-A-Heart Mobile Keeps on Chugging Along! 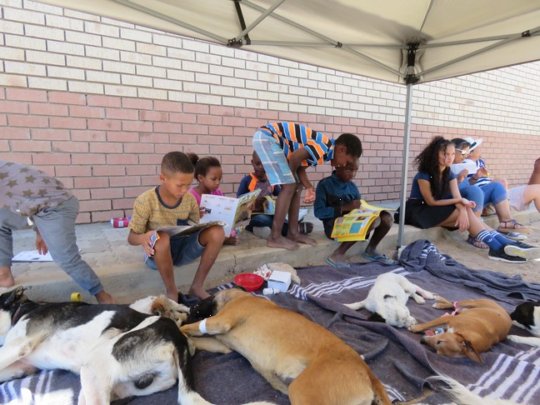 Children who attend the clinic also get Pako mag

Since the last update in July, HAH-Mobile has completed the following mobile trips:

AKI funds had already been expended by the end of July, so these mobile clinics were not undertaken with AKI support. However, just this past week, AKI sent the 2nd disbursement of 2017 to HAH-Mobile, so our funding for clinics will once again resume starting this month! AKI has been 1 of the very few consistent supporters of HAH-Mobile, which is so important to help them plan and to ensure that they can keep promises to return --like they did in Keemanshoop (below).

As always, HAH-Mobile's August and September trips were successful and much appreciated. The last spay day was on 20 September in Keetmanshoop, where they sterilized 5 cats and 34 dogs (see picture of 1 of the Keetmans dogs with his owner below), and treated 2 sick dogs. By 9:30 AM that morning, they were full for the day and they had more than 40 animals on the waiting list! HAH promised everyone they would return and these 40 animals would be the 1st in line to be sterilized next time in Keetmans.

Besides spay/neuter and vet care, HAH-Mobile is a BIG supporter and provider of Humane Education. At all their clinics, they distribute Pako magazines; these are locally produced magazines about cats, dogs, and other animals. They are always hugely appreciated by the children who attend the clinic (see pictures).

During the southern HAH trip, HAH also had rabies control information and animal welfare booklets from Global Alliance for Rabies Control (GARC), which they had printed for free in Windhoek.  The booklets teach children about rabies, how to handle dogs safely, and how to look after dogs properly, and include the 5 freedoms of animal welfare. This was the 1st time that HAH handed these booklets out, and they were very popular with the kids.

During the Okahandja trip in June, HAH had set up a coloring table for the children, where they colored the "Be like a tree" coloring sheet, also produced by GARC. The simple coloring sheet shows children that they should stand still, like a tree, if a strange dog comes near them. They really enjoyed the coloring, learned a simple and valuable lesson, and it kept them entertained.

HAH-Mobile is hoping to continue these educational programs along with their spay/neuter/vet care clinics.

Of course, we'll keep you updated on how your valuable and generous support is helping cats and dogs in Namibia during HAH-Mobile clinics during the remainder of 2017.  Meanwhile, check out the pictures below from HAH-Mobile's recent clinics.

AKI and HAH-Mobile are SO grateful for your support of this lifesaving initiative. 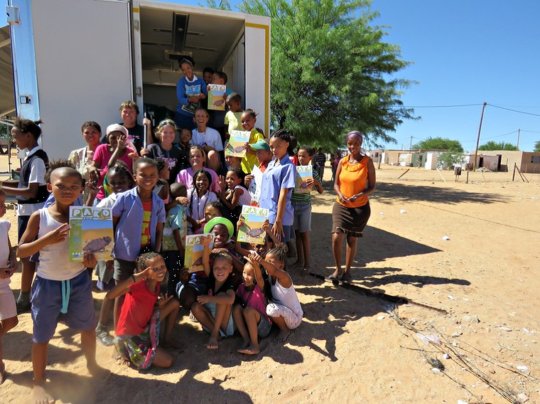 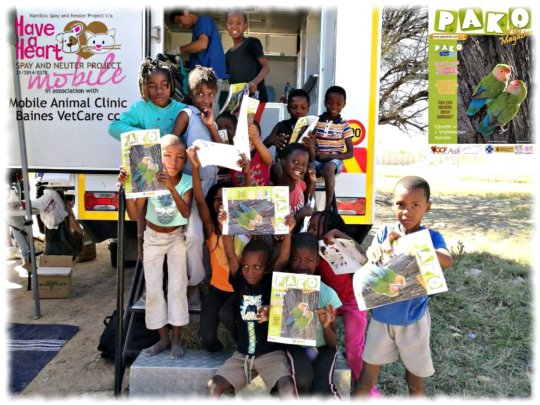 All kids who attend the clinic get Pako magazine 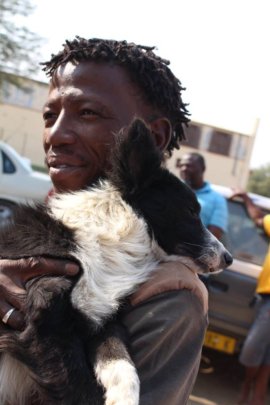 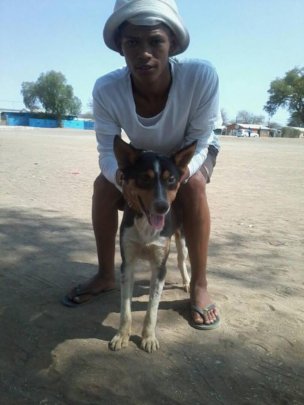 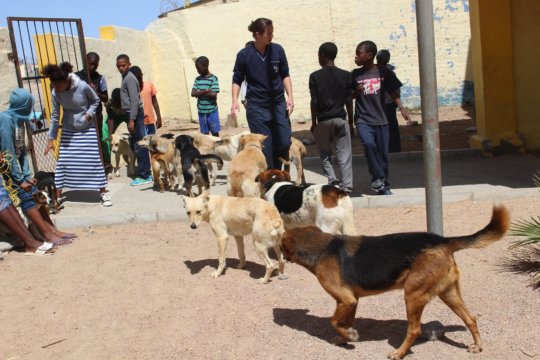 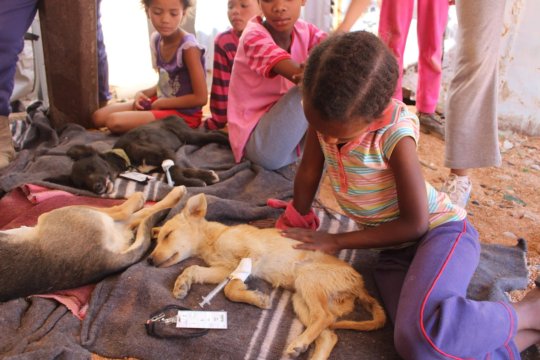 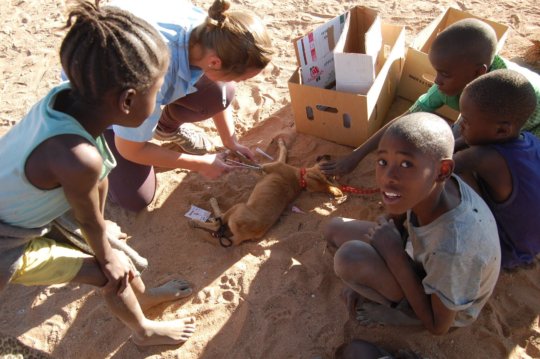 ‹ 1 ... 6 7 8 9 10 11 12 13 ... 16 ›
WARNING: Javascript is currently disabled or is not available in your browser. GlobalGiving makes extensive use of Javascript and will not function properly with Javascript disabled. Please enable Javascript and refresh this page.