our last report for this project please

Thanks so much for all your help with our crowdfunding effort. We hope you can accept our report – we found that malnutrition has so many more causes that a supplement and advice are not enough. We hope to come back to you asking for help with a second project that promises, given that the whole family eat right, there might be some cash at the end. We can’t wait to get started and very much hope that all our donors will be with us. With warmest regards and many thanks again Elke

Please note that Catherine has found a better paid position, since we started. 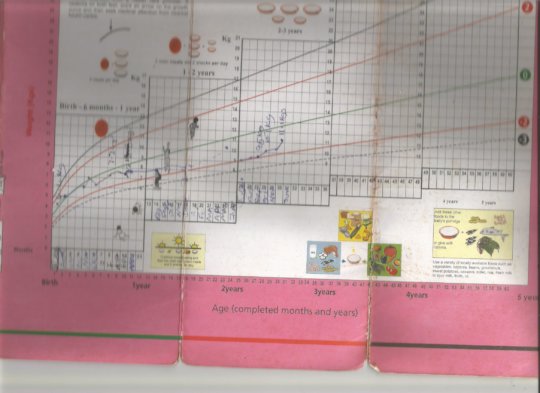 one girls weight going towards average

Children seen: 229 children were seen the first time, 146 a second time and 156 a third time. The second and third interviews questions were asked about food for the child with malnutrition.

Results from the third interview with 156 families:

Between meals Snacks including sweet potato or biscuits 25, breastfeeding 35. Those indicating nothing either verbally or nonverbally 65

For the families with 156 children who were on the road to malnutrition, there was no trace of a balanced diet: 461 x maize,( i.e. 3 times a day starch with just a little protein). Zambians prefer white maize meal which has very little protein. Tiko is introducing ‘brown’ maize, which is even cheaper to grind, mixed with 50 % cassavaflour. People are stuck on maize, so half cassava is a real important step forward. Cassava is cheap to grow, is drought resistant avoids he debts that go with hybrid maize seed and artificial fertilizer buying, even if subsidized.

For the 156 children there were 72 servings with protein, i.e. less than half of the family got any protein during the day, kapenta (dried fish) and eggs , some soya products (commercial) and beef. Note that the best servings go to the man of the family, if there is one, especially the fish (5) and chicken (2). Most received one and a quarter portions of vegetable, mainly rape (90), dried pumpkin leaves (65), okra (18), cabbage (8) and cowpea leaves (7). Two thirds got some legume once a day and only 35 families get one ‘in-between’snack, namely sweet potato (12), rice (6), banana (5) and one orange.

From observations and reports it is clear that meals are prepared for the entire family and only the father is favoured. It is unlikely that the mother took special care of the child with malnutrition. The malnourished child is not given special care and in fact the interviewers found the ONENEPA was being shared by all the children. This makes sense to the Director of Tiko. When years ago Tiko was distributing food to community schools, there were always some children described as especially in need. These were given extra bags of maize by World Food Programme, but most villages did not agree and divided that maize between all of the households.

Compared to a Mediterranean diet, out of 20 portions a day with fruit, vegetable, grain, and protein, these families get 18 portions out of 20 from maize. Considering that maize is being planted by almost all rural people in Zambia and is a disappointment every year for subsistence farmers, then there is not only the wrong food being produced , but also not enough of the wrong food!

Moreover, half of the children in one group and a third in the other had had diarrhea in the week before the interview. These findings are shocking and well explain why there is so much malnutrition in Katete.

Report from the fourth and last visit

With the rains having started early and then stopped, the first half of the harvest was lost. When the rains restarted, the farmers went to the fields with double zeal and there was no way we could hope to see the mothers and children together at all. So, only the under-five cards were collected.

Results: out of 164 children we had seen on the third visit, 30 had not been to see the clinic for being weighed in 2018, which left 134. Out of these, six or 4.5% went further down towards malnutrition, 28 ie 21% kept their direction from before, 10 or 6 % improved in the beginning and went down at the end or the other way round, but did improve overall and 90 or 69% did clearly change direction away from malnutrition.

Stop malnutrition in 200 underfives in Zambia was our goal. We saw 239 children at the first visit, and out of them 156 on the third visit. 100 of these had changed towards a better weight after 3 weeks with ONENEPA and 3 weeks without. That is half.

Whether these children will continue towards an average weight, in other words, whether we ‘stopped’ malnutrition in these 100 children is another question. Going by anecdotal evidence, namely the call from the mothers to please come back, we think we did achieve some change in awareness of the young child’s needs, but from the information we collected on the nutrition people get and the deep belief in sharing alike, not according to need, a more decisive change of mindset will have to be effected.

Just how unaware some people in the villages are as to the needs for healthy food you will find reported in Tiko’s newsletter from end of March. A new group we visited insisted they needed to start income-generating activities like chicken and did not take into account that not only did they themselves not have enough food, but that the pigs next door, the result of their last ‘income-generating activity’ had not had food for 5 days and no water for 3.

Not all of the money from the crowdfunding has been spent. We will go back to the villages with food demonstrations for snacks. When a mother is told that her toddler needs five meals a day, she will panick, because for her that means the need for five times cooking, which of course is impossible. 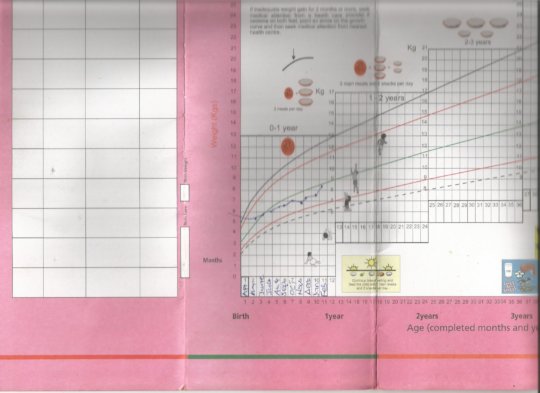 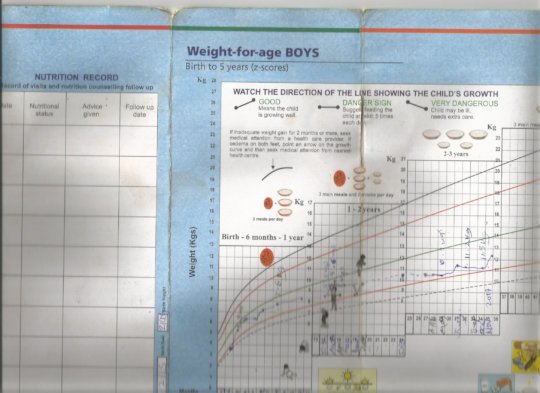 one boys weight went up, but no value for Jan/Feb 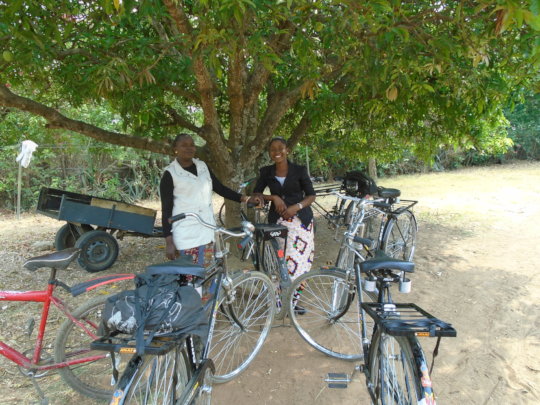 Rozindabah and Miso are early for their trip

The last visit to the 229 children who are receiving food supplements should have been made at the beginning of December, but the rains came early so everyone in Katete district has been working in the fields since then. Tiko also gives the crew two days off to tend their own fields each week during this planting time. This meant that the facilitators were not consistently available and in any case,would not have found mothers and children for the meetings which take place in the open. February is the time for weeding, so that will be a better period for our visit and in the meantime, we hope that the children are still benefitting from the food supplement and their improved diet.

In fact, we started with what to most donors would seem to be a simple project, but in rural villages in Zambia this brought to light problems you would not have thought of!

At least three visits were made to each village and as well as some obvious progress, they showed up obvious cultural differences. Let’s admit that, by Western standards, many of the visits started pretty chaotically – the mothers are not there since often women take their children to visit relatives (any report of some relative not being well calls for a visit) and children from one village may be found in a different one; a funeral is taking place and everyone has to attend that as per tradition; some other village activity was planned, but not communicated to our facilitators – a myriad of reasons why appointments had to be changed or single families be found on other days.

When trying to find a mother and child again, there may be a problem with names. The mothers change their names the moment their babies are born; they become ‘mother of …” and, with a number of children, that becomes really difficult. Moreover, most people in Katete have Banda or Phiri as their surname. Using first names works very well within Tiko, but outside it is not easy to always identify people.

In the local culture verbal communication is limited. Although they love them dearly, adults do not talk to babies or toddlers. They believe that it is no use talking to somebody who cannot yet talk and the Western way of talking to babies (and dogs) seems totally mad to them. The result is that children’s language development is delayed and, as they rarely learn to speak clearly, the whole community basically mumbles. Girls in particular must avoid attracting attention and will not be able to speak up loudly other than with their peers. Add to this the fact that the Tiko facilitators have limited education themselves and their questions are not taken as seriously as one would wish. Moreover, if people don’t understand or don’t like a question they simply do not answer.

One also has to take into account that for the people here ‘food’ means ‘nsima’ or maizepap, - (now for some mixed with cassava) or porridge, which needs cooking. This usually takes two hours on an open fire for which wood first has to be collected. There are no ready-made meals or special foods for toddlers to make up five feeds per day. The idea of mashing fruit and vegetables for small children is new and in any case, this is difficult to do for women who are often without utensils that most people elsewhere would consider minimal basic equipment.

Tiko is working on this and hopes soon to be able to supply some nourishing foods that do not require cooking such as tasty vegetable or granola bars. But that won’t be easy: Even the crew at Tiko, who should be used to my funny ideas, were not impressed by the roasted sunflower and pumpkin seeds that are so popular in many parts of the world including Zambian towns. Remember that in a traditional society changing tastes is a multi-generational task!

Enough of these problems. We are pleased that we can report that many mothers sent messages to tell us that their children were growing well and that they wanted more ONENEPA. Definitely, something good has started to happen and next time we will send some data. Thanking you all from the bottom of our hearts and wishing you a contented Christmas –

yours ever Elke and the Tiko crew 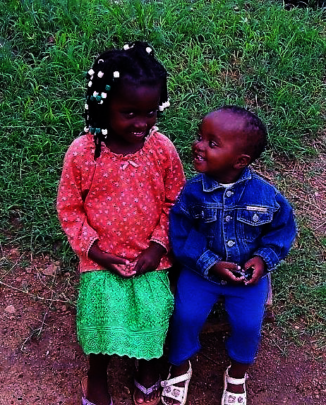 two of the many children who face a better future