Building a Movement: Support LWB's Work in the US 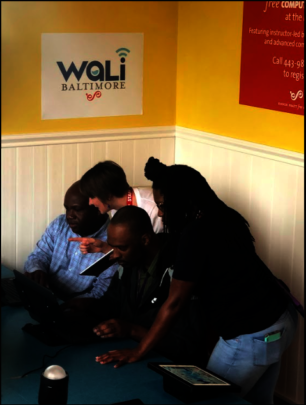 Exciting Updates from Libraries Without Borders!

On behalf of Libraries Without Borders, thank you for your generous donations to our Building a Movement Campaign! We are grateful for your continued support of our work, and would like to share a few updates on our current programs, as well as exciting news about upcoming initiatives.

The Wash and Learn Initiative: Expanding a National Movement

At present, LWB is running the Wash and Learn Initiative (WALI) in laundromats in eight states across the country. Each WALI site features library programming and is equipped with iPads, computers, books, and arts and crafts materials. At every WALI site, both children and adults have the opportunity to learn new skills from experts in basic, digital, health, and legal literacy, among others topics.

On June 10th, we launched Baltimore WALI at four laundromats across the city. Check out these videos from the launch to learn more about our work in Baltimore (link below).

In the months to come, we’ll finalize details on our sites in San Antonio and Oakland, while simultaneously gearing up to launch two new sites in Anoka and Moorhead, Minnesota.

The Ideas Box in Puerto Rico: Using the Arts and STEM to Build Local Capacity

Following the success of last summer’s pilot program, LWB continues to provide educational and cultural programming with the Ideas Box.

Through your donations, and with generous support from SONY, we have expanded our pilot in Loíza into a full-year program. This May, we also launched “Empréndete: Loíza,” a series of community-building events that kicked off with the first-ever make-a-thon to take place on the island of Puerto Rico. During this event, residents formed teams that developed their own solutions to local problems. This fall, we plan to provide these creative minds with seed funding to transform their ideas into reality.

In partnership with legal aid providers, local libraries, and nonprofits, we have curated, contextualized, and simplified legal resources to meet the needs of the communities we serve. With oversight from our Legal Literacy Advisory Board, we will continue to provide these communities with a steady stream of relevant and reliable legal information.

To date, we have Legal Literacy programs in the Washington D.C. area and Providence. In the months to come, we will focus on building partnerships between law libraries and public libraries in order to familiarize branch librarians with legal issues that are common in the communities they serve.

Increasing Rural Literacy Rates: Building on the Success of Wash and Learn

Building upon the best practices gleaned from the Wash and Learn Initiative, we plan to launch a program that serves residents living in manufactured housing communities (aka “mobile homes”)  in rural areas across the country. The pilot will begin in Fridley, Minnesota, where we have partnered with a local library and a resident-owned, manufactured housing cooperative called the Park Plaza Co-Op. Through this pilot, we will set up iPads, laptops, arts and crafts materials, and a space where residents can participate in library programming inside the co-op’s storm shelter. By working with the library and other community-based organizations, this pilot will provide residents with opportunities to develop basic, digital, health and legal literacy skills. Stay tuned for more updates on this program! 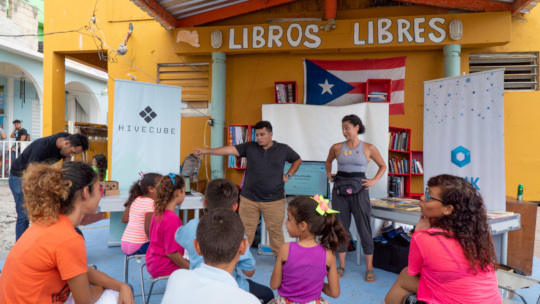 Libraries Without Borders is excited to announce that we will be re-activating the Ideas Box program in Puerto Rico this summer!

After running a successful pilot in Loiza and La Perla, the Clinton Global Initiative highlighted our Ideas Box project at their Post-Disaster Recovery Action Network’s convening last January. Shortly thereafter, we received a generous donation from Sony to re-activate our Ideas Box program and expand our efforts to serve the community of Loiza.

This donation, coupled with the integral support of people like you, will ensure that we can provide children and youth in Loiza with leadership and STEM learning opportunities — from virtual reality to hands-on creative endeavors at our pop-up makerspace — as well as arts and culture programming. In the months to come, we will host a town hall in Loiza, during which community members will have the chance to tell us exactly what kind of activities and programming they want to see at the Ideas Box. We’ll also continue to work with our local partners to re-design the Ideas Box, transforming it into the first hurricane resistant, solar-powered pop-up library in the world!

Stay tuned for more updates on the Ideas Box program in Puerto Rico!

Exciting News from Libraries Without Borders!

On behalf of Libraries Without Borders, thank you for your generous donation during our “End of Year Giving Campaign.” We are incredibly grateful for your continued support of our work, and are excited to share a few updates on our programs to date.

The Wash and Learn Initiative: Building a National Movement

By working with public libraries, local nonprofits and laundromat owners, LWB successfully launched the Wash and Learn Initiative (WALI) in eight states and the District of Columbia last year. While each WALI site reflected the needs and interests of the local communities served, by and large, this program provided community members with access to tools and training opportunities to promote learning and workforce development.

The Ideas Box in Puerto Rico: Promoting Resilience and Preparing for the Future

In the aftermath of Hurricane Maria, LWB launched a pilot program that brought the Ideas Box in Loiza and La Perla, two communities on the north coast of Puerto Rico that were devastated by the storm. Beyond damaging its physical infrastructure, the hurricane also compounded the island’s financial woes and led to the closure of nearly 300 public schools. In an effort to fill this gap, LWB used the Ideas Box to create a space where children and adults from both communities could access educational programming and cultural activities. We hosted everything from virtual reality workshops to arduino tutorials to STEM activities. Community members were also encouraged to create their own programming, which resulted in dynamic bomba y plena workshops and drum-making tutorials.

Later this summer, LWB is excited to announce that we will expand the pilot into a full-year program in Loiza! Through the generous support of donors like you—and with additional funding from Sony—we will offer educational and cultural activities, train local residents on how to serve as facilitators, create a pop-up makerspace complete with 3D printers and laser cutters, and organize a hackathon at the University of Puerto Rico. This all-day, sprint-like, collaborative event will bring kids from Loiza to San Juan, where they will work with university students to tackle what they see as the most pressing issues in their communities. Through this initiative, LWB and its partners will also develop blueprints for the world’s first hurricane resistant, solar-powered, internet-capable pop-up library and makerspace, which will be manufactured entirely in Puerto Rico.

In 2018, LWB strengthened its programming for the Legal Literacy Initiative, which brings legal information to those who need it most in the places where they regularly gather, such as churches, schools and community centers. In partnership with legal aid organizations, local libraries and nonprofits, LWB curated, contextualized and simplified legal resources according to the explicit needs and concerns of the communities we served.

Going forward, we will continue to leverage the support of our Legal Literacy Advisory Board, which is comprised of leading practitioners, preeminent legal scholars, and thought leaders in the field. With their oversight, we will continue to expand our programming and build out our “legal library” to ensure that the content we share with community members is relevant to their circumstances and reliably reflects current laws and policies. At present, there are Legal Literacy programs in the Washington DC area, Minneapolis/St. Paul, Providence, and other cities across the United States.

Libraries Without Borders is Growing!

The LWB team has experienced a number of staffing changes over the past year. In January, we saw the departure of Allister Chang, who stepped down from his role as Executive Director in order to join the Berkman Klein Center for Internet and Society at Harvard University as well as the LWB National Board. We also welcomed three new employees to the team, Carly Wais and Azure Grimes in our Baltimore office, and most recently, Mabel Diaz, who is overseeing the development of the Wash and Learn program in San Antonio. Later this year, we anticipate bringing on a National Program Manager and Project Coordinator for the Wash and Learn Initiative in Oakland.