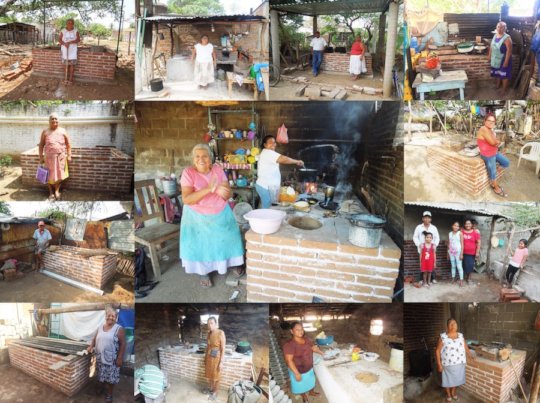 On the basis of the damage and vulnerability diagnoses, Cooperación Comunitaria AC implemented the Social and Comprehensive Habitat Reconstruction Project in the Isthmus of Tehuantepec, Oaxaca, that includes reconstruction of housing, bread and comixcal ovens, and kitchens; as well as constructions of new housing, school-kitchens, and of the first center of arts and trades in Ciudad Ixtepec. From the studies on housing and kitchen of Ikoot and Binnizá indigenous groups, all of this structures recover the traditional istmeña [regional] characteristics and techniques to be included into a reinforced system —specific for each case— against the earthquakes and strong winds in the region.

In March and April, 50 bases of comixcal oven [used to make a kind of tortilla toast] were built in four neighborhoods. This process was developed through workshops with the families that are part of the Project along with the labour, which encouraged the assimilation of the reinforced constructive system, the appropriation of the recent-built oven, and the comprehension of collaborative work between neighbors and with Cooperación Comunitaria.

For the construction of kitchens, we have developed 50 diagnoses and several collaborative design workshops, where women revealed how much time they dedicate to produce food in the oven, and how important is the kitchen as a space used for production, for family gathering and for transmission of knowledge. This has allowed us to identify how the proposal of the kitchen could adapt to each of the people’s needs and preferences.

In addtion, Cooperación Comunitaria made a proposal with bahareque cerén [an earth constructive system], which also resists climatological conditions in the region, that it is being used in the construction of the first center of arts and trades of Ixtepec; in this case, logs have been replaced with sticks to reduce impact on deforestation. This traditional technique has also been proposed for the kitchens, since it recovers earth construction and the use of local materials. However, it is currently out of use, so this has implied many difficulties when looking for the materials, and for skilled labor with this knowledge.

Along with the kitchens and ovens, the project to build new housing and reinforce the ones that were damaged, in which traditional istmeña houses have been rescued from demolition in cases were they could be repaired, reinforced against earthquakes and strong winds in the region and inhabited. Currently,  44 houses are in process for being reinforced, and 18 new ones are in the process of construction.

Also, at the end of last year the construction of a kitchen-school was concluded in San Francisco del Mar —a community of the Ikoot indigenous group—, conceived as a model for traditional kitchens that can be replicated in other communities of the same group. Subsequently, another kitchen-school will be built based on the traditional characteristics of the Binnizá indigenous group in Ixtepec, for the moment.

Such processes have meant a challenge for everyone because of the constant increase of material and manufacture prices and later on because the raises of tempeture of 40 centigrades degrees that make people tired, but it has allowed relationships between neighbors to strengthen and for them to assume collaboration as a tool to work as a community for the reconstruction. 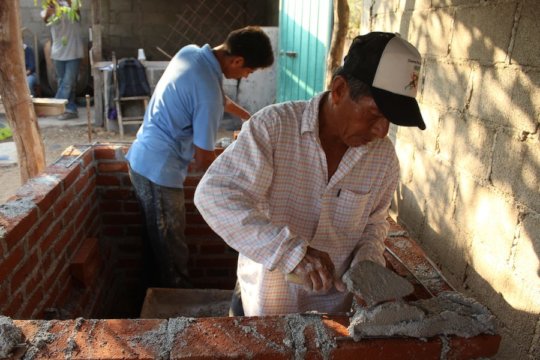 Construction process of a base of comixcal oven 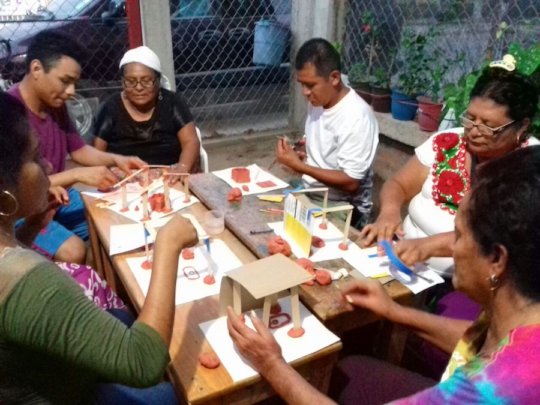 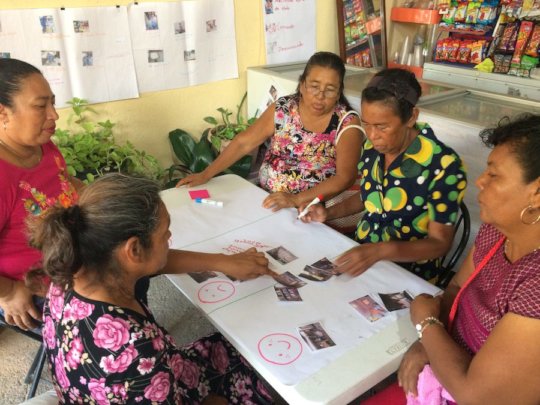 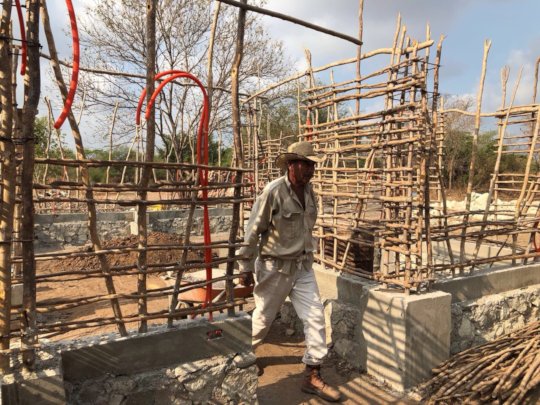 First center of arts and trades of Ixtepec 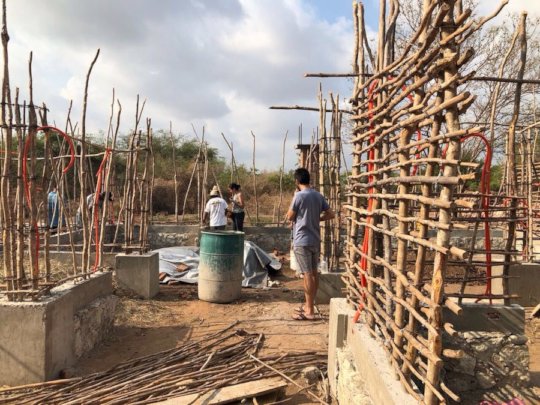 Construction process of center of arts and trades 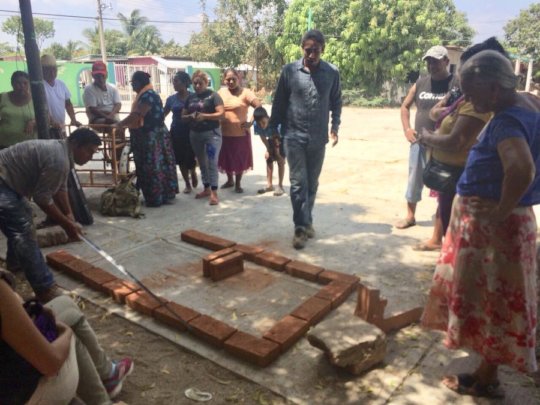 Workshop for construction of bases of ovens 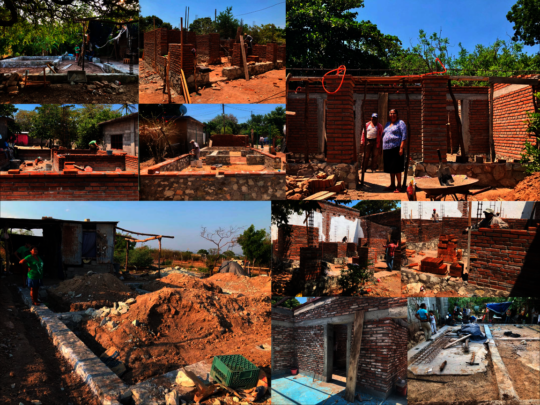 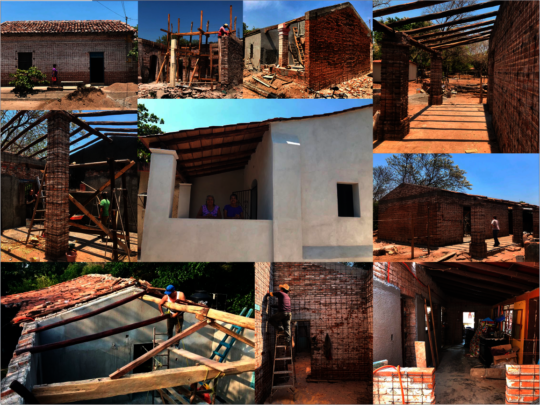 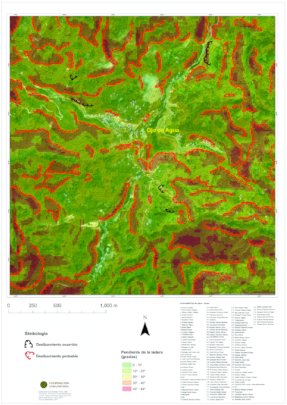 We keep working with the same group on the training program for reducing the vulnerability in four communities of the Mountain of Guerrero, which represents the local key stakeholders of the municipality, such as the team of Municipality´s civil protection, the communal agrarian office in charge for planning the sustainable use of natural goods; “Pastoral Social“, students from the local University, teachers for indigenous education and participants from four communities.

After the workshops and the analysis of landslide risk by combining community knowledge with detailed geological studies; maps of risk-zones, for the relocation of risk-prone homes and crops, the geologist made the formal risk maps of 4 communities and they were discussed with the inhabitants of each locality: Ojo de agua, la Ciénega, Lucerna Baja and Lucerna Alta.

In order to recover the knowledge about adobe and its cultural value, we have made some interviews to compare the case of a reconstruction project made by a private developer managed by government, with the adobe houses we have already built in la Montaña. This is reinforced by building workshops where we have facilitated some reflexions about the differences in security and habitability.

The groups produced 3,000 adobes for the 2 Indigenous Education Center on reinforced adobe technique. One of them is already on construction and the other one will start on April 2018. As we have been saying the constructions will be a training hands-on workshop on reinforced-adobe construction techniques. At the same time it will be a place where professors of Indigenous education will be able to gather together after the primaries schools are close for them.

This kind of constructions aim to give the communities a construction knowledge for them to have a secure and better quality houses, with a material that they are able to get in the place, without bringing construction´s material from faraway places, making it cheaper and ecological, and allowing people to live in a adequate habitat.

In addition, Cooperación Comunitaria has made some short infromation capsules for radio, in order to spread the reinforced adobe construction´s  knowledge in different communities. Soon they will be online in Spanish and Me´phaá  (local language).

Within 3 months, after the Center contruction has finished, the second one will start.

We thank you for your valuable contribution to the communities of the Mountain of Guerrero. 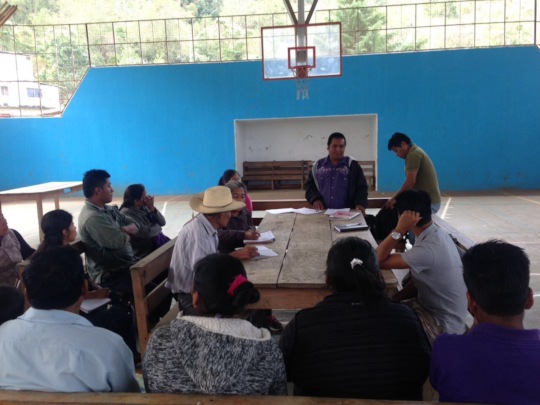 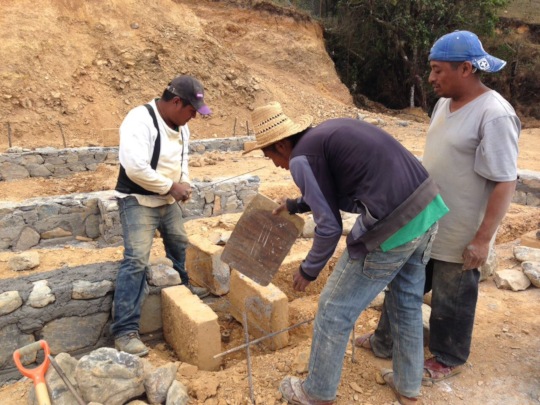 Preparing the construction by Promoter Grabiel 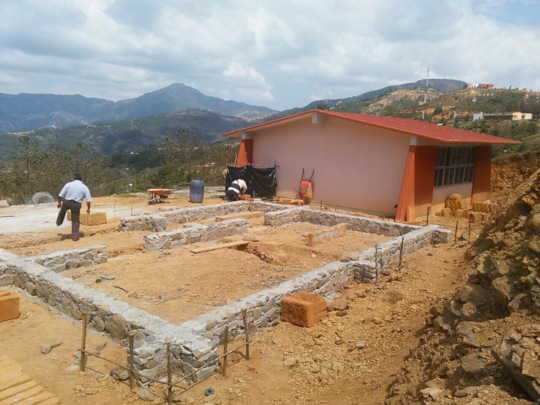 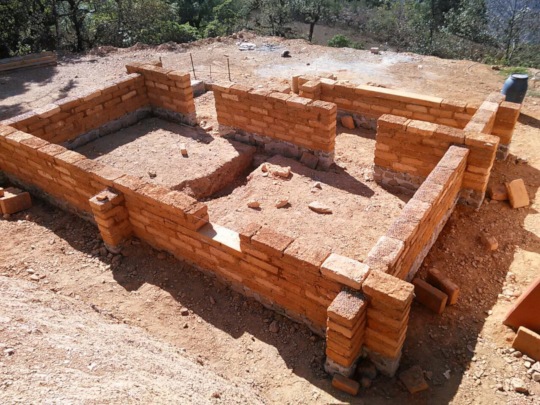 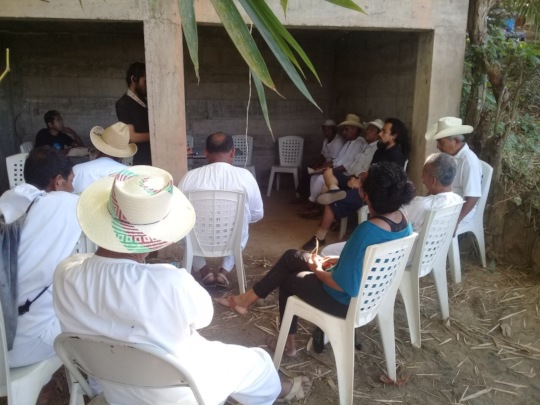 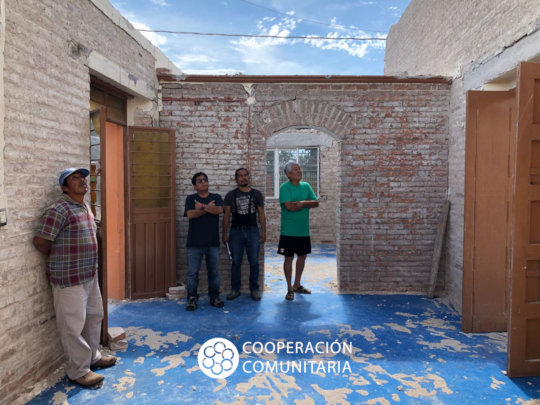 After the diagnosis finished, maps of vulnerability were made, as well as a map that identified houses with partial damages and total damages in Ixtepec, Oaxaca. From then on, meetings with earthquakes victims are taking part in two separated groups.

Due to lack of mason workers in the region, starting to build 70 houses has been slow. The work has begun little by little. Nine new houses are building foundations and 43 reinforced houses have started pulling the plaster down to see the cracks in the walls and start covering with a metal mesh.

On the other hand, we started the diagnosis to know the damages in kitchens, comixcal´s bases and bread ovens. After the diagnosis of 114 families, in 5 different neighbourhoods of Ixtepec, we founded out that 94 women needed 78 kitchens, 94 comixcales, 72 bases for comixcales and 34 bread ovens.

In February we have delivered 94 comixcales in 4 different neighbourhoods, 19,000 bricks and material to build the comixcal´s bases, as well the bread ovens bases, while women have commited to look for the sand to build them. As soon as they get the material the construction will start.

Two hands on workshops for building comixcale´s basis have been made with women, and one participative design traditional kitchen workshop for their construction.

Although inhabitants of Ixtepec mainly belong to zapaoteca ethnolinguistic group, Cooperacion Comunitaria is also recovering the women´s economy from other communities which are Ikoot or Huave culture. San Francisco del Mar was the first to organize with 23 women who made a kitchen. There, they learned about traditional construction, but Cooperación Comunitaria helped to reinforce the construction to resist the local earthquakes and hard winds that raise the 160km/hr in the region.

After we finished building the kitchen, Amelia, the owner of the first one and who lost her house and kitchen during the earthquake said: “ I am very grateful with all of you because you helped to recover the traditional knowledge that has almost disappeared. I liked the process because we learned something, I like the kitchen. Nowadays people buy all the material, I like this kitchen because is fresh¨.

With the inhabitants` organization and participation, the social recovering and the comprehensive reconstruction are easier and become a process not only a quick action.

Cooperacion Comunitaria´s team and the communities of Oaxaca are deeply grateful with your contribution. 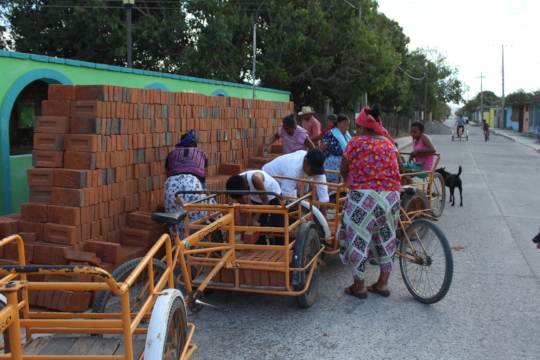 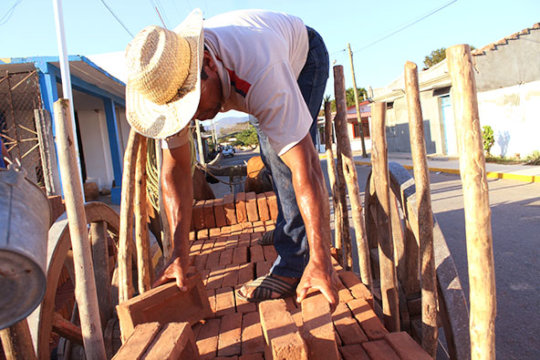 Getting bricks for building the base for comical 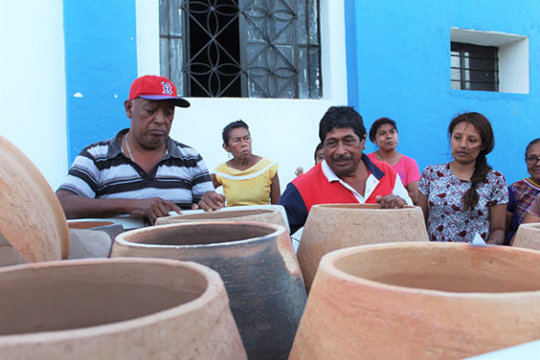 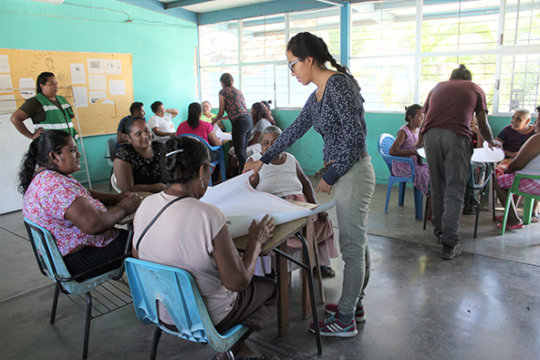 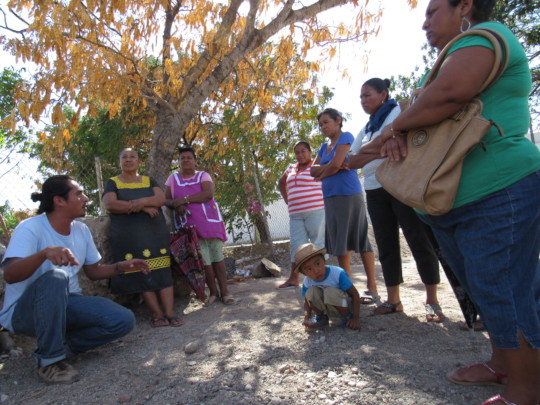 Building the first comixcals base. 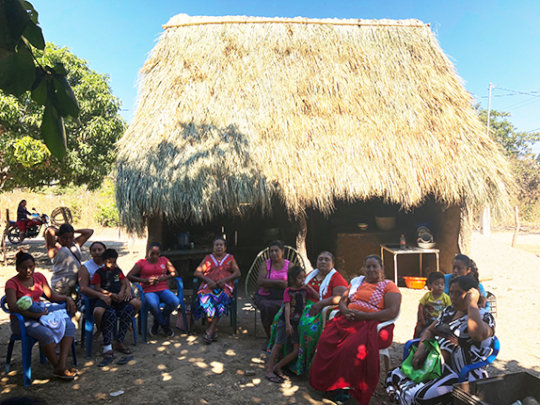 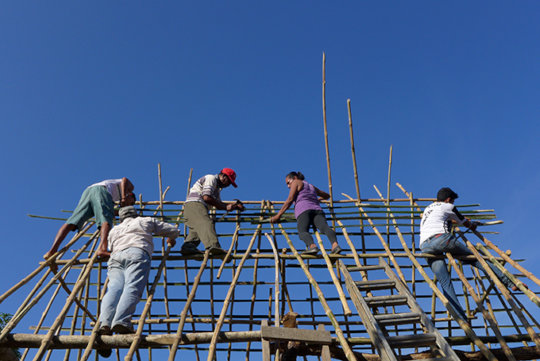 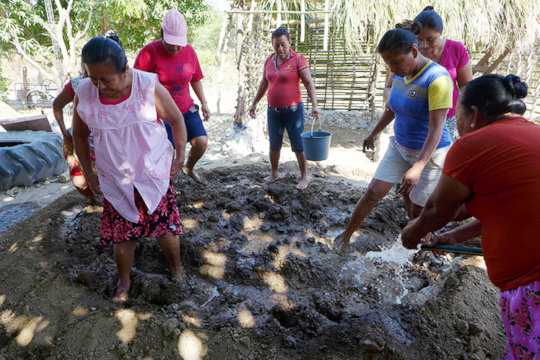 Preparing the mud for walls 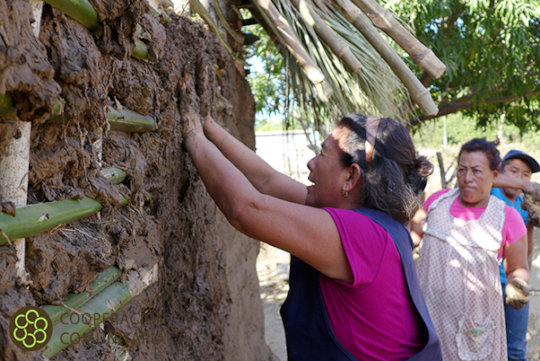 Finishing the first kitchen in a Huave community 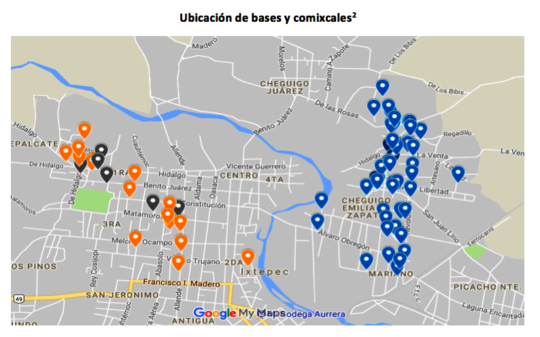