From the perspective of human history, migration has always been a concept that existed in the lives of societies, but in this historical process we have experienced, it has become a reality that all humanity has thought much more. World Refugee Day was designated by the UN General Assembly at the end of 2000 to be celebrated on June 20 of each year in order to draw attention to the problems of forcefully displaced people in the world.

Today, 70.8 million people have left their lands behind because of conflict, violence, persecution and had to move to the regions they think they would live in better conditions. That's twice the number of 20 years ago, 2.3 million more thanthe last year’s. Today, around 25 people per minute are being displaced by force all over the world. About 26 million of these people, who had to leave the land of their birth, were refugees. When compared to the world's population, this data shows that 1 in every 106 people has to leave her/his home. In Turkey, which hosts the largest refugee population in the world, 1 in every 20 people is a refugee.

In 2011, with the civil war that began in Syria, there was a period in which the largest mass population movements after World War II took place, and this difficult period was called as ''the age of migration''. In this process, While Syria has become the highest sending country in the World, according to June 2019 dated data of Directorate General of Migration Management, Turkey hosts the largest number of Syrian refugees in the world, with 3,613,644 people. Considering that the number of non-Syrian refugee population living in Turkey is approximately 500,000, today, it is known that there are more than 4 million refugees living in Turkey. Therefore, June 20, World Refugee Day is of much greater importance for Turkey,when compared to other countries.

Being the first to include the concept of ''Asylum Seeker'' in its name with the 24-year long history in the field of migration and refugees, as one of Turkey's largest and long-established non-governmental organizations, Association for Solidarity with Asylum Seekers and Migrants (ASAM) conducts activities aimed at informing the refugees in our country about psychosocial support, access to rights and services, and improving their social cohesion and life skills. ASAM General Coordinator Ibrahim Vurgun Kavlak said the following in the statement he made within the scope of World Refugee Day, on June 20: ''Our country has been carrying out a historical duty especially in the field of refugees since 2011. In our country, where the highest number of refugees in the world live, as ASAM, we carry out projects in the areas of protection, access to education and health services, employment and social cohesion in cooperation and coordination with our relevant public institutions and organizations in particular, the European Union and the United Nations organizations in order to produce solutions to the difficulties faced by refugees. Over the past two years, we have reached more than 1 million refugees as ASAM. About 500,000 of these refugees are children.”

As ASAM, by improving the living conditions and ensuring social cohesion of refugees in Turkey, we will continue to increase and contribute to the solidarity between Turkish and refugees. We believe that love, tolerance, reconciliation and peace will make the world beautiful.

Wishing for a world without wars, where people do not have to leave their land...

We always deserve to be hopeful! 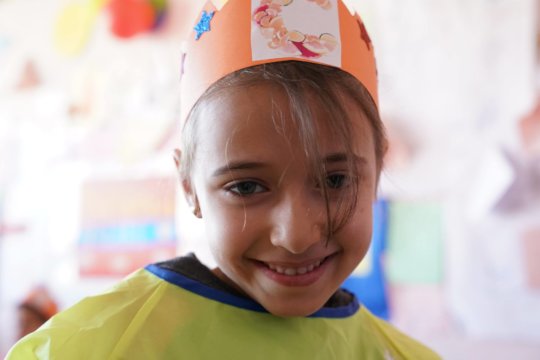 Even though we don't have everything we want in life, we always deserve to be hopeful.Meet Fatma.

A 7-year-old Syrian girl who has a big smile on her face towards life. She lost her father two years ago in the war. Her mother, on the other hand, is unable to work because of her kidney disease. Her two older brothers, aged 12 and 14, contribute to her family's livelihood. Fatma receives psychosocial support in different areas such as self-care, body protection and friendship within the scope of ''Protection-Focused Preventive Preschool Program'' offered to children in one of our offices.

Thanks to your donations Fatma has a beautiful smile.

We still need your help to support many more children like Fatma.

We thank all of you for your incredible support.Thank you so much!

Remember Zakaria, from our last report? Thanks to your support, we payed for exam fees.

He managed to enter a Medical School in Turkey. Now it's our time to support his dream in this challenging path of becoming a doctor. Only with your help, we can make sure that he achieves his dream.

We asked why he wanted to be a doctor and he replied (in his own words):

"The reason that I want to study medicine goes back to the childhood of me: once we (father, mother and I) were watching like a series and during an episode of it there was a character how represented a good-behaving person; I really loved that character and I've said at that time unconsciously that I want to be like him!! After some days from that situation there was my birthday and my parents gave me "toy doctor set" as a gift!! Since that time I want to be a doctor, not of anything, but just because that, in my opinion, studying the human body is one of the most holy and human things!! And as I have mentioned before, I always was active -and still- in Biology lessons so that I always could score full mark in the exams. I want to be a brain surgeon in the future because I was always curious about the brain and I want to do my own research in this field, hopefully!! "

But in order to continue his education, we wanted to provide him with the textbooks he needs.

We thank all of you for your incredible support.