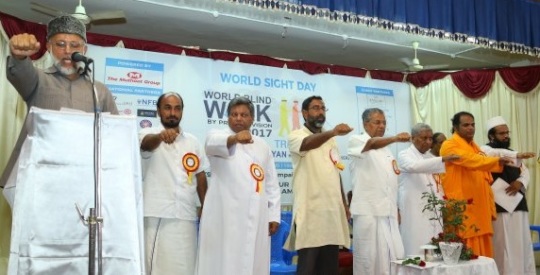 The largest eye donation campaign in the world was conducted on October 12, World Sight Day through a novel program called ‘BlindWalk’ to express solidarity with the visually challenged people and to motivate people to donate eyes. The specialty of BlindWalk is that, it blindfolds sighted people and take them on a one kilometre Walk in busy public places with the caption – “FEEL BEING BLIND”. Most touching aspect of the BlindWalk was that, it was led by visually challenged people. While they walk in the front with their white canes, the blindfolded participants hold on to them to find their way in their temporary dark world.

The most touching part of the BlindWalk was that, it was led by about 15000 visually challenged persons. In every place, they led the Walk by walking in the front and the blindfolded persons walked depending on them. For the first time across the world the blind persons had the joy and confidence in leading someone and felt happy. White canes and Talking watches along with Braille slate were distributed to the entire blind participant who took part in the walk. In some places, other needed materials like blankets were distributed to them.

When a child was born to Abdul  and Shamla, from Kerala,  their expectations were high. But soon it vanished when they realized that their daughter was blind.  Her parents searched many ways to get her sight back. But no avail. Nothing gave them an iota of solace. With much despair they began to conform to their fate. She was given the name Fathima.

During the day she had nothing to do and had to spend her days within the four corners of the house. She was gloomy and despondent and that was influencing her parents also. One day one of the friends of Shamla told about a blind school at Calicut, Kerala.  They soon got an admission for Fathima there.

When she started going to the school her gloominess vanished. She was transforming to a girl full of energy. Teachers helped her to realize her innate talents. She began to sing songs. Her parents were amazed. They never thought she had such talents. The little girl began to bloom with her music. The blind music teachers Nisar and Sajna realised her creative faculties and shaped her into a full blown artist. Then the school became a heaven for her. She did not want to come out from this paradise not even in holidays. She began to write small notes on her experience in the school and that became her diary.  Such was the impact the school and teachers had on her and that was a stunning metamorphosis in her life.

From the early childhood itself Fathima did not like to play with toys. So, her father presented a small keyboard and that fostered the natural instinct of music in her. But Fatima’s parents did not take this seriously until her talents were unveiled at the school. She is doing things like any other ordinary girl. Her parents are satisfied and feel proud of her immense talents. Today they no longer blame their fate. The parents are convinced that they are living with not an ordinary girl.

Currently Fathima is the brand ambassador of “The Project Vision” for the Kerala State and she led the BlindWalk at Calicut. She is a multi-linguistic singer and composer and has many albums to her credit which she had done for the school children’s. Fathima has learnt to sing in around 12 foreign languages. Her abilities in the field of Music are astonishing and motivational to many others. She is willing to now perform stages to help the children who are visually challenged like her. Through her, the world can understand that blindness can never stop a person to be great.

Fathima’s ambition in life is to study English from Cambridge University so that she can travel all over the world. She wants to speak many foreign languages. She wishes to lead her parents in the journey.

Support to raising a dream: Story of Nisha

Nisha born on 1978 as elder daughter of Palath and Subhadra, from the hill district of Wayanad, Kerala, India. She resides at Meenagadi. She is  a graduate. She got married to Mr. Sunder and has a child. At the time of her pregnancy she was diagnosed with brain tumour, she was advised to abort her child but she held her faith in God and gave birth to the child. But in the process she lost her sight. Her son Mohith is now 5 years old. Ironically this son now takes her around and shows the way.

Nisha, had always an urge to write from her very childhood. With the help of her mother she began writing again and completed five books of poems. This is now helping her at this situation for a livelihood.

The titles were Shabdam Varachha Chitram (Art drawn by the sound), Oru Vasanthakaalathinte Ormayikku (To the memory of a spring), Akakaazhcha(Inner sight) and  Oru Rapadiyude Gadgadam (The weeping of a Nightingale). “Mounavilapangal” (Silent Sorrows) was her latest book, which she found very difficult to publish due to financial constrains.  Support was given through The Project Vision to publish her book. We have promised to buy 500 copies of it to be circulated by us, helping her financially for her livelihood.

Project Vision thus supports visually challenged persons to discover their talents and also to make a living through it so that they can live with dignity.

A word of gratitude

Together we can ‘LET EVERYONE SEE’ 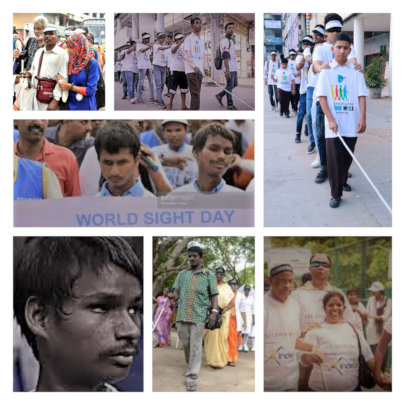 Driven by the inner sight..... 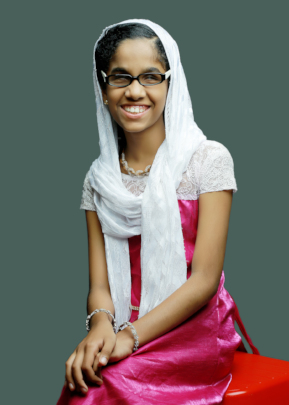 Fathima: Smile of a new beginning 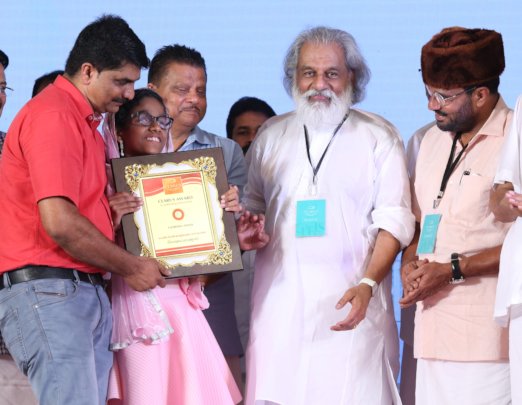 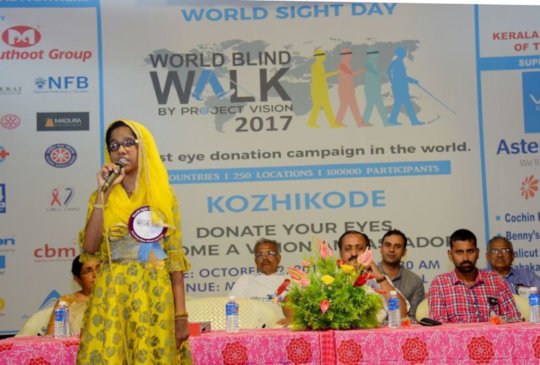 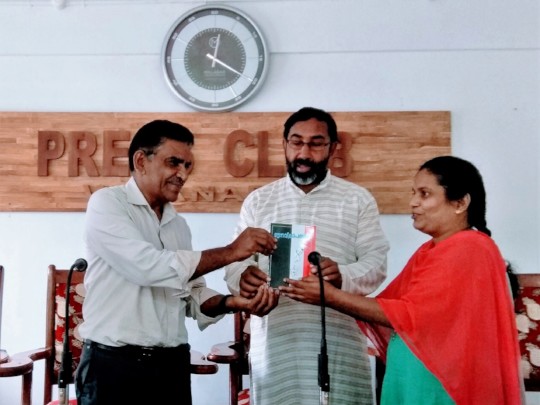 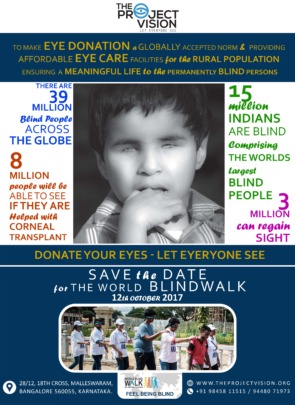 Differently abled children’s getting back to school.

On the 18th of June 2017, a get- together was organized by the Project vision team along with differently abled children and the children of disabled parents. Paying out the annual school fees brighten the smiles of parents and children’s as well. Our youngest vision ambassador   Ms. Tresa of 3rd std distributed school bags to the preteens. Celebration of birthday’s by cutting the cake was the attraction of the day. Rhymes of the kindergarten made the preteens exhibit their talents and abilities…..Concluded with a lunch and discussion for the medical aid support.

WORLD BLINDWALK organised by PROJECT VISION was the largest eye donation campaigns in the world in 2016 as per the report compiled by the IAPB (International Association for the Prevention of Blindness) on World Sight Day.

The program attracted national and regional media very well and is a clear example of its widespread attraction and effectiveness.

Launching WORLD BLINDWALK '17 - involving several countries in about 100 locations. A Manual for organising BlindWalk was released by Mr Anand who conceived the idea of BlindWalk, Ms Smeja who coordinated the report along with Mrs Alphonse and Family.

Financial support for families of persons with disabilities…

The elected representative of the area (MLA) and the Director of The Project Vision during  August 2017 joined hands to support the marginalized. The Participated weaker group was supported by giving 20 sewing machines and five push carts to financially support families of persons with disabilities. Free distribution of spectacles to people who required lenses for vision correction was given out.

The camp concluded by the eye screening. 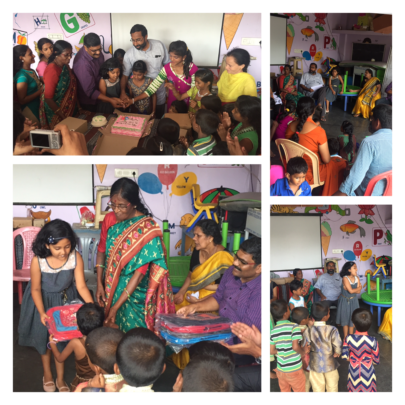 Tresa along with the preteens for a celebration 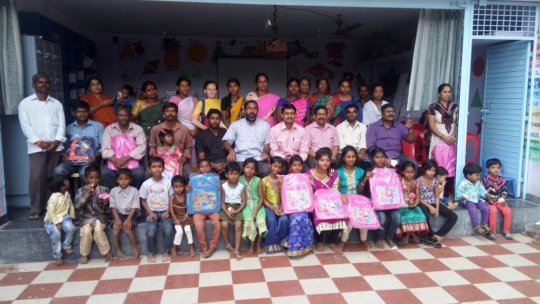 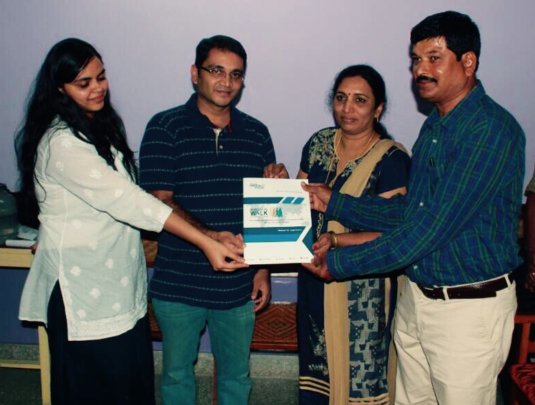 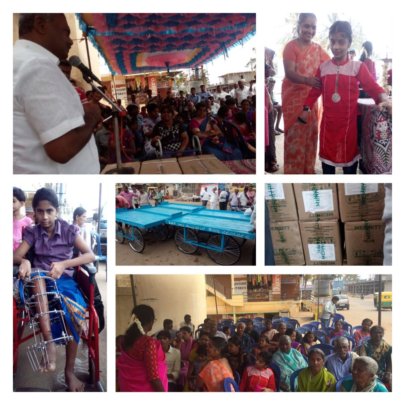 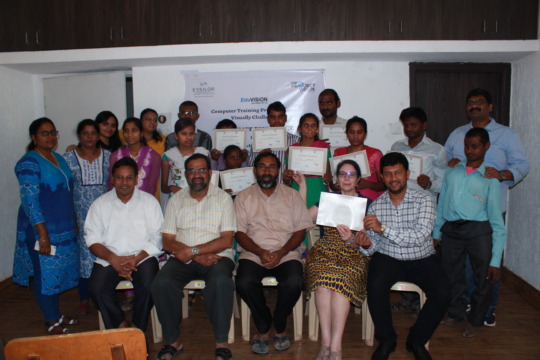 On 23rd March 2017 The Project Vision presented certificates for the first batch of visually challenged students who had completed their computer training.

Ms Aicha Mokdahi, the President of Essilor Vision Foundation based in Paris distributed the certificates. Project Vision has been working for the visually challenged since 2013 with the vision, ‘let everyone see’.

Fr. Xavier Manavat from the Claretian Missionaries attended the event along with Fr. George, Director The Project Vision.

EduVison is one of the projects of Projects Vision providing education and training for the visually challenged students. About 200 students are helped with college education.

A Word of Gratitude
We are highly encouraged to work on this mission with the funds that you've donated.

Thanks for your generosity. 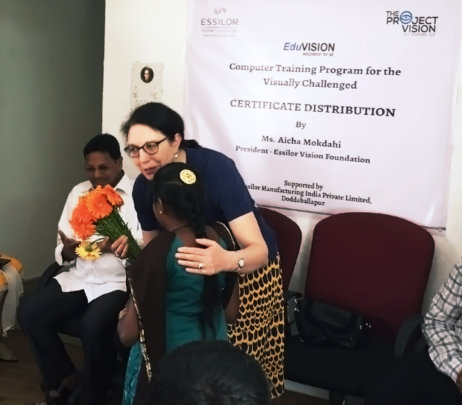 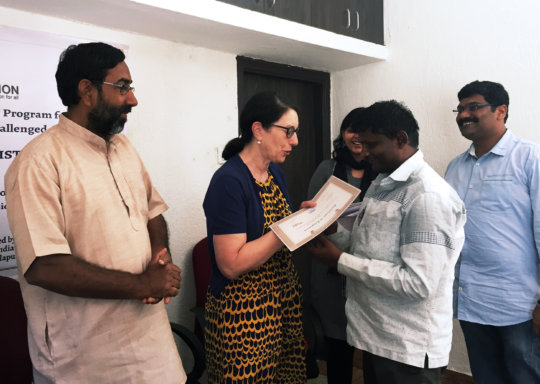 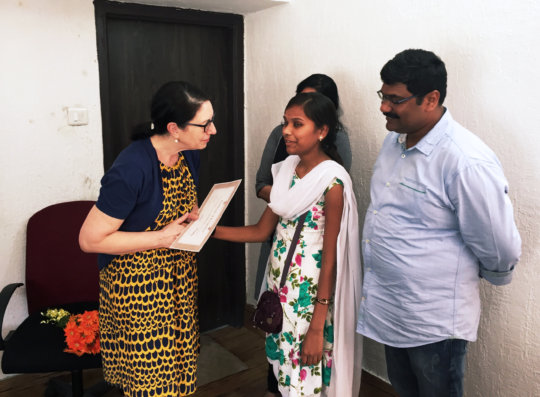 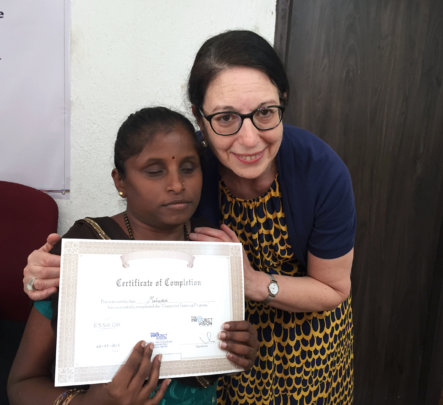 Well done! You are destined to make it big 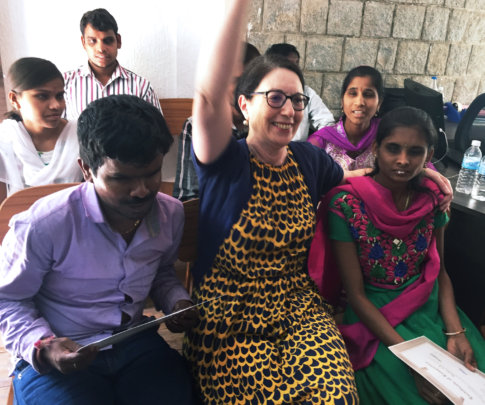 Celebration
‹ 1 ... 4 5 6 7 8 9 10 11 12 ›
WARNING: Javascript is currently disabled or is not available in your browser. GlobalGiving makes extensive use of Javascript and will not function properly with Javascript disabled. Please enable Javascript and refresh this page.