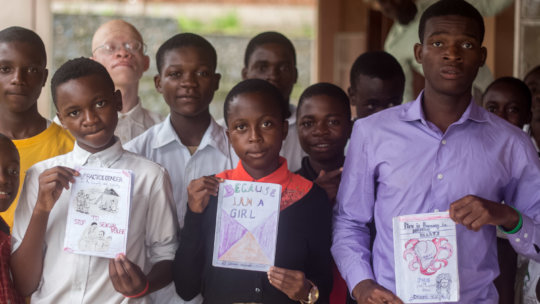 The last six months have been very exciting for Make Art Stop AIDS. We have been using the art for dialogue to address girls and women’s rights in Malawi, particularly participatory arts-based approaches. This was a special project for us because we got a chance to collaborate with our sister organisation at UCLA.

For the first phase of the project, we trained tertiary students from Chancellor College and Domasi College, who made up our MASA Squads, on different gender concepts and issues, and various participatory art approaches.

The MASA Squad members from Domasi College visited two secondary schools where they performed with the students. Gender was the main topic of the performances, with consent being as the most popular and highly contested topic amongst the Squad members and the secondary school students. Each concept was introduced separately and students would provide feedback immediately.

“Not many people were aware of the impact consent plays in gender issues and sexual and reproductive health. There were a lot of misconceptions on the matter. However, our discussions with them helped us to clear all the hidden misunderstandings about consent,” Titus, a Domasi Squad member, said.

The college students then went on to train secondary school learners on the different gender issues and concepts that they had already been trained on. The secondary school learners were very excited and keen to learn how they can use participatory art to promote gender equality in their schools and around their communities. It was really heart-warming to see the learners pledging to promote girls and women’s rights in their schools and communities, and creating different art pieces that they showcased to their peers and parents.

One of the project highlights was when Okif, a MASA Squad, a member shared how the project has impacted him and his peers at Chancellor College. He specifically mentioned how being part of the project empowered him to use his position as a student leader to tackle sexual exploitation issues that some of the girls from the college were facing from their lecturers.

“Through the knowledge that I got from MASA, I took it upon myself to pursue a gender-based violence issue that had been taking place on campus for so long. I thought to myself, enough is enough, and I reported the case to administration. Because I have been trained on how to pursue gender issues and cases, I encouraged girls who were victims to come forward. Through the action I took, the lecturer who was using his power to exchange good grades for sex with the female students was dismissed and a case was also reported to the police authorities,” he explained. 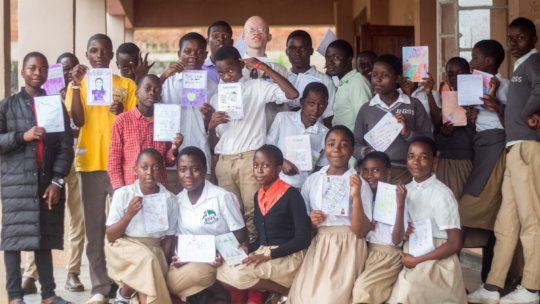 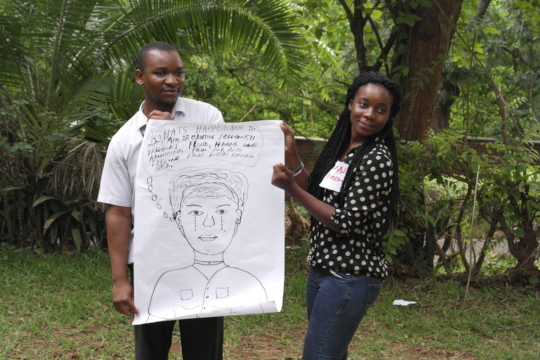 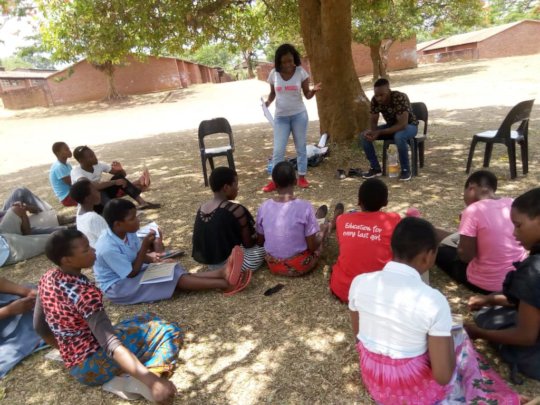 The past few months have been a time for reflection and we look back at the impact that the Creative Freedom of Expression project had on one of our dreamers.

With the end of the Creative Freedom of Expression project, we look back at one of the participants, Chimwemwe from the project Mawu Athu, to shed some light on what the project meant for her.

When Chimwemwe heard that Students with Dreams was looking for projects all about the creative freedom of expression, she knew she had the perfect idea for a project. She would work with secondary school students, introducing them to different kinds of art that they could use to address a social issue that is important to them. This became the spark that became the project Mawu Athu, a project that worked with students from Mulunguzi Secondary School that used arts to help young students to tackle social issues they found.

“We used art to address social and cultural issues that young people face in the communities, such as early pregnancy, drug and substance abuse, gender-based violence, and abortion,” Chimwemwe said. “During our early interventions, the students learnt about different social issues in their community. From this, they came up with ways to address the issues, and later came up with arts.”

Chimwemwe was impressed by all the art the student came up with. They dreamed up everything from songs to dramas to drawings to poetry, which they all had a chance to showcase to their fellow students. It was through the success of this project that Chimwemwe grew as a leader and gained practical skills.

“For me, working on a project is more than just the work in the field. It’s budgeting, partnership, and writing proposal applications,” she said. “The programme equipped me with the skills to conduct any kind of the project; I know how to budget, how to do monitoring and evaluation. My college courses didn’t cover any of the topics, but I can do them because of Students with Dreams.”

She also appreciated that the trainings not only gave her the tools to use the arts but also did so in a creative and fun way. “Students with Dreams is a great platform to open people’s minds and learn about the root causes of poor learning standards.” 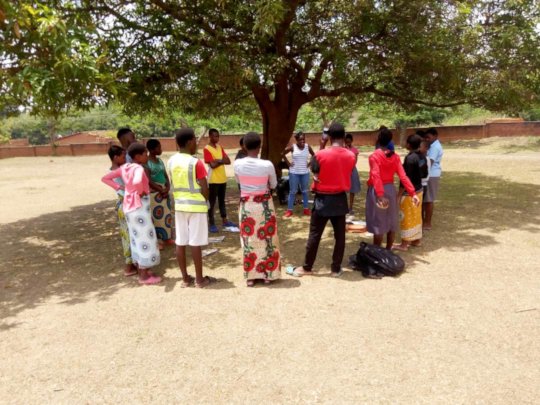 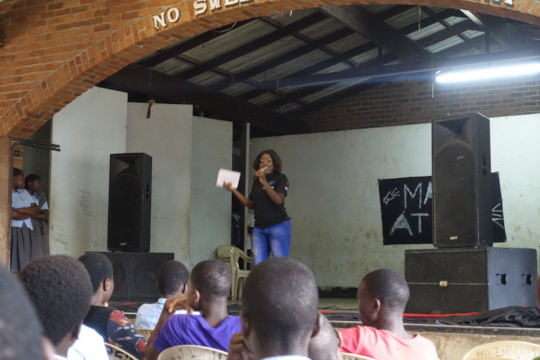 Wrapping Up with Creative Freedom of Expression 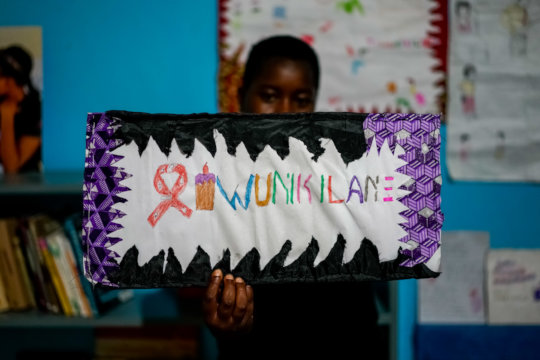 It’s a wrap! At the end of 2019, the cohort of Dreamers who focused on creative freedom of expression finished their training, graduated, and hosted the final cultural event.

The final training for the Dreamers included learning more about leadership and what it means to be a leader in society. Session topics included communications, conflict resolution, facilitation, and leadership.

As part of the focus on creative freedom of expression, we hosted a couple special cultural art showcases. The showcases were included several artists from different art mediums such as poetry, dance, music, spoken word, and visual art. The first event, in early November, also served as a chance for this year’s Dreamers to meet the artists, learn from them, and see their work in action, so the artists who mentored them during the day time now showcased their talents. More than 50 people came and saw the art on display and the performances from the poets and musicians.

In December, we held the graduation ceremony for the Dreamers which then transitioned into the second arts showcase. At the graduation ceremony, the Dreamers displayed the work that came out of their projects, including poetry, songs, and a visual representation made out of old cassette tapes representing the journey taken by the participants in expressing themselves creatively. In the evening, we welcomed the public. The Dreamers continued to showcase their work and we had performances by an incredible range of artists: poets Menes La Plume, Phindu Banda, Nyocase, and singer-songwriter Anne Quinn. The performances were lively and the attendees loved hearing about the Dreamers’ projects and the creativity.

Spotlight on the Dreams

Baller Kunthanzi is a project that aimed at empowering girls to participate and excel in male dominated sports. They had three interventions with their secondary school girl athletes. Working with a group of 17 girls for their first phase, they held soccer and basketball session with the girls, teaching them the sport and how to play. They then gave the girls a trip to Chancellor Collage, where the girls got to tour the sports facility, meet a few female players who served as role models for them, and got to watch a motivational film. Later they worked with the boys at the school and educated them on creating an open space for both genders.

Fyness Gondwe is studying to be a nurse at Malawi College of Health Sciences (MCHS). She co-founded the project Tiunikilane, a project aimed at using art to help adolescents living with HIV understand their condition, cope with the unique challenges this provides, and have a meaningful and successful life. She applied for Students with Dreams with the idea, unsure of herself and if she could accomplish the mission of the project. Fyness had a rough start; MCHS closed when she was still trying to establish the project and get the necessary approvals from hospital authorities to begin the project. She was living outside of Zomba which also slowed down the process. Another blow came in the form of a shutdown of the initial partner organisation that was going to connect the project with beneficiaries. Despite all this, Fyness sought help form ArtGlo and her mentors, who arranged and connected her to a organisation. With all of these challenges, Fyness’s partner left the project, leaving her to manage the everything solo. Not to be discouraged, she pushed through and even found a new partner, Molicia Chilinda, who shared her same passion and drive to carry out the project. Fyness and Molicia were able to get full approval and consent to start working with the youth and the project took off with 10 young people.

Finally being able to implement Tiunikilane gave Fyness great joy. She found the participant response particularly encouraging, as they opened up on issues they did not feel like telling others, especially during the one on one sessions. The model used by Fyness will continue as the sessions were fun for both the facilitator and the participants, and the participants developed art of their own. She learned, over the course of the programme, to reach people’s hearts and get them to open up about the things that were on their mind. The end products displayed by the project were a testament to the time, care, and effort that was put into the project by her and her project partner. It was quite the transformation seeing her go from a shy, timid young woman who we initially interviewed, to the go-getter that pushed to make her dream come true. Fyness wants to continue with the project and we are looking forward to seeing where things go from here. 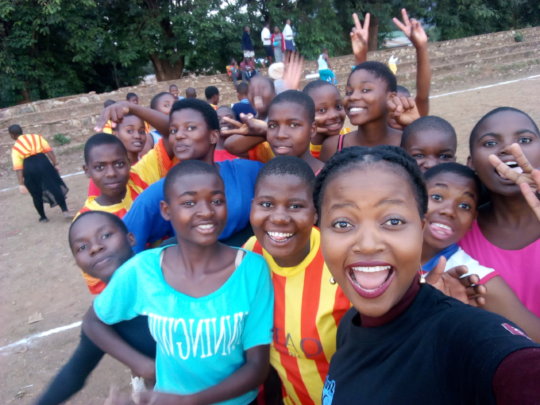