Youth Know Too: Spotlight on SRH

This reporting period we look at the work that other SWD alumni have been doing since graduating from the programme. We focus on Stewart, an alumnus who was a co-founder of Youth Re-defined. Youth Re-defined was a project that centered on Sexual Reproductive Health (SRH) Rights among young people as well as ensuring male participation on these issues, this included accessing existing knowledge, practices and attitudes and using participatory art forms such as music, drama, posters and discussions to interact with youth.

Since graduating he volunteered for a Malawian non-profit Organisation called Abundance, which led Stewart to work with Sustainable Futures in Africa (SFA) Network. While volunteering at SFA, Stewart was part of a symposium in Botswana and Nigeria in 2017 and 2018. During the Nigeria symposium, he was chosen as a Research Admin of the SFA network. Continuing with his passion for youth and their voice being heard in the conversation on SRH, he co-authored a study about Youth Participation in Reproductive Health Policy-making in Malawi conducted in September 2018 to June 2019 the research involved travelling across Malawi, interviewing young people and interested stakeholders that are involved in SRH policy-making

“There is substantial progress in youth involvement in SRH policymaking in Malawi. However, some structural and societal factors are choking young people's involvement and are evident in their lived experiences. For instance, some young men feel that there is an "overemphasis" on the girl child empowerment, which on its own is problematic.” Stewart commented when asked about the main findings of the study. The study also found that overall, female respondents expressed confidence in their ability to step up and conquer the gender divide that exists within SRH (and other areas of) policymaking spaces, when and if they are given the chance and support to do so. It, however, is an uphill battle as SRH is still a topic line where policy in Malawi does not reflect the youth perspective.

“There is a need to address the policy-practice gap that exists with regards to youth and SRH policymaking. If this was not a big problem, then perhaps due to the current COVID-19 pandemic we would not be hearing about thousands of girls in Mangochi and Mwanza (among known districts) getting pregnant every month.”, Stewart pointed out.

Stewart hopes to develop a successful career in youth work, youth policy and advocacy. Researching on a “policy and youth-related” topic for his Master’s degree marks a milestone in pursuit of his career prospects. He is currently a student, volunteer and researcher, studying for a Master’s Degree in Education studies for Adult, Youth and Community contexts at the University of Glasgow. He has a keen interest in the Implications of foreign aid on education policy and practice in Malawi. Stewart always looks back at the experience he got during his time with SWD programme as the time that ignited his passion for youth work and is forever grateful for the opportunities SWD programme gave him. 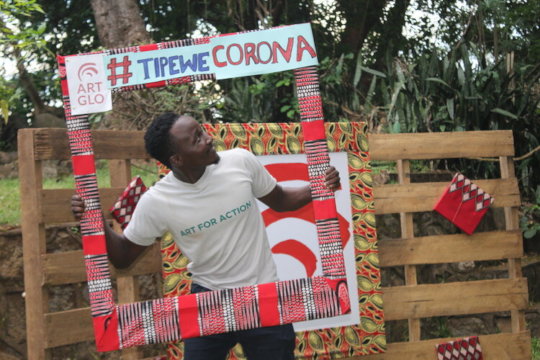 To engage their fellow youth on Corona Virus prevention, the MASA Squad came up with a youthful song and video to raise awareness on how everyone plays a huge role in reducing the spread of Corona Virus. The song, Tipewe Corona (Prevent Corona) features tips to help individuals stay safe and protect themselves from the virus. It's being played on national radio stations, and MASA Programme Manager Sharon Kalima was featured on Times TV to share more on the initiative.

We then set a dance challenge for young people to create their own dances to the song. Young people from across Malawi submitted a range of creative entries.

“I joined the challenge because I personally wanted to be part of the larger community that's working so hard in providing the awareness on COVID-19, I'm a dancer and this is how I express myself and communicate." said winner, Busisiwe from Lilongwe.

In Second place phenomenal dance crew from Dzaleka refugee camp, Salama Africa Dance Crew stole our hearts with their energy and creativity. The dancers shared with us why dance is so important to them:

“In Malawi people were taking dance as something that helped them to lose time... I am proud of this because together with my managers we have rebuilt the dance industry of Malawi with our Salama Africa project. No one knew us, but now the whole country of Malawi knows about Salama Africa dancers. We have put dance on the front line so that we can change the narrative of our fellow refugees in Malawi and in the world.”

We're excited to have recruited a team of dynamic MASA graduates to act as mentors for a new project, which will use learning from MASA Youth to empower grassroots Youth-Focused Organisations (YFOs) in Zomba district to use participatory arts and Human-Centred Design approaches to create their own Adolescent Sexual and Reproductive Health Rights projects.

“One of the reasons that inspired me to join the mentors team is that I already have the basic knowledge on facilitation and arts which I obtained from previous projects with ArtGlo. There are indeed many grassroots YFOs which can benefit from the approaches we use at ArtGlo in tackling adolescents sexual and reproductive Health Right challenges in their communities. I have a feeling that as a mentor it will be an interesting experience.” Said Dave, one of the new mentors.

You can read more about Dave and the other mentors here https://www.artgloafrica.org/our-stories/how-four-young-leaders-are-helping-artglo-champion-asrhr-in-local-communities, and do follow our social media to follow the progress of our mentors and the YFOs! 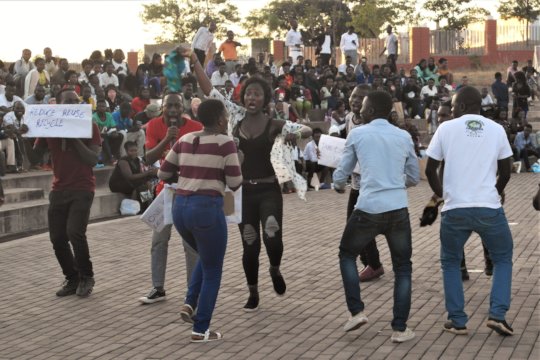 The last few months have been really exciting for our MASA Squad members. Word is spreading about their unique interactive performances, and they’ve been invited to perform at several high-profile events.

A huge highlight was performing at the UN’s celebration of 55 years of Malawi being a UN member state. The reception at the UN Resident Coordinator’s residence brought together high-profile people, including UN Representatives, Ambassadors and Government Ministers. The MASA Squad members were very excited to have the opportunity to engage such an esteemed audience, and discussed at length the topics they would like to raise, and how to approach them.

For ‘Good health and wellbeing’, the squad chose to focus on mental health as they believe that this is a growing issue in Malawi, particularly among young people, but there are ongoing cultural taboos around talking about it. They also felt it is an issue that is not receiving adequate attention from high profile players. Their piece sparked an active dialogue, with several audience members referring to recent news reports about a high number of suicides in Malawi, particularly among men.

On ‘Climate Action’, the squad reflected on their experience and learning from the Art for Action tour. One thing that came out was that young people don’t feel empowered to engage with decision makers (particularly those from Western countries, where the vast majority of emissions come from) about the causes of climate change. The squad developed a play focused on interaction between young people and a Chief (who was represented through his messenger), with the overall message that there needs to be more dialogue between youth and leaders. They also wanted to highlight the global nature of climate change, and the need for collaboration with players at different levels doing their bit to tackle it. Audience members (including Ambassadors!) shared examples of how climate change is affecting their country, building a feeling of common purpose towards tackling it.

On Gender Equality the squad performed an excerpt of a poem, combined with audience interaction on gender equality. In the interaction, one audience member focused on how some of the negative attitudes and behaviours brought out in the poem have always been there and will never change. Due to limited time it was difficult to fully unpack this, but on reflection after the performance, the squad members were surprised that someone would bring out such a blatant view in a high-level event, and felt it showed that there is far more to be done on gender equality at all levels in Malawi.

The MASA Squad also performed at the UNFPA@50 and UN @55 Youth Action Concert, which brought over 1000 young people, with appearances from some of Malawi’s top musicians like Sangie, Fikisa and Piksy. Creating a performance to engage such a huge audience was a challenge the squad rose to, developing high energy pieces with a lot of interaction.

They kicked off with a piece on youth climate change protests, and the youth audience got in the spirit, joining the performance on stage. The interest rose even more when the squad moved on to a piece on sexual health. The squad felt from their experience youth have heard messages on sexual health, but there is still a mismatch between knowledge and behaviour, so their piece focussed on bringing out some of the reasons that youth still don’t practice healthy sexual health behaviours (particularly condom use), and possible solutions.

The youth strongly asserted that they are aware of messaging that it’s important to use a condom and practice safe sex, yet many young people don’t do so. They were very vocal in voicing out barriers to safer sex. These included the view that the freely available condoms are not appealing, the perception that asking to use a condom is a sign that someone doesn’t trust their partner (for example it implies that they think they are having sex with other people), and the idea that it is the male who is responsible to have a condom but they often conveniently ‘forget’. They also said young women with condoms are commonly seen as sex workers. They shared that while condoms are available, particularly in health settings, youth find it embarrassing to access them (particularly if the staff member isn’t youth friendly and they feel judged).

Solutions the audience came up with included making flavoured or more appealing condoms freely available, making condoms available in a wider range of settings and making sure the people distributing them are youth friendly. They also believed there was a need for more engaging education, particularly on social issues such understanding that trust shouldn’t be shown by agreeing not to use a condom, and breaking taboos to girls accessing and having condoms.

As well as the UN Celebrations, the Squad was delifghted to perform at Malawi's International Mountain Day celebration in Mulanje, and AFIDEP's strategic plan launch. It’s also been exciting to see how Squad members are taking what they’ve learned from being part of MASA in to their own arts practice and initiatives. For example, emerging poet Mwandie has taken learning from MASA and is using it to raise awareness on Gender-Based Violence and sexual health through poetry, and Adorah has started her own youth arts initiative ‘The City’. With your support, we’re looking forward to training more young people to use the power of the arts to engage their peers on sexual health, HIV and more in 2020!