Inspired by nature to protect the elusive snow leopard 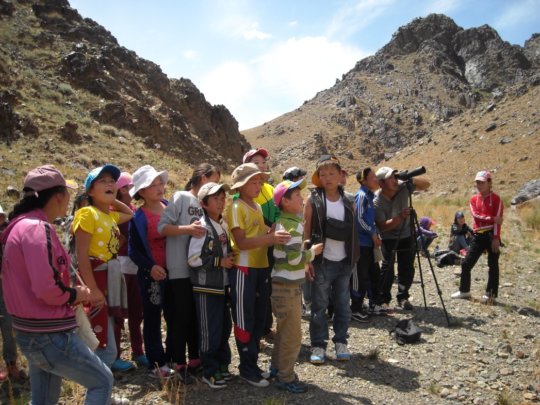 Awakening awareness and an appreciation for nature and wildlife among children is a key conservation approach for the David Shepherd Wildlife Foundation as we work to develop and inspire the conservationists of the future and protect key populations of endangered animals.

In Mongolia, where there are an estimated 1,000 wild snow leopards, we fund  a conservation education programme that includes eco-camps run in the South Gobi. The five-day camps for 12-13 year-olds (many the children of local herders) include looking at the lives of snow leopards and the ways that we can protect them, how the food chain works and how it can collapse, local plants and animals and their biological adaptations and climate change.

While there is a lot to learn, the high-light is always the hike to an area of prime snow leopard habitat. The children get so excited to find snow leopard scrapes and scat and to see snow leopard prey species. They spot the nests of eagles and vultures and can observe bird species at water holes.

They discuss the importance of the grasslands and ways in which its health can be improved - including rotating livestock, selling excess livestock to keep herds at a sustainable size and breeding less often. And a role-play activity about snow leopard-herder conflict helps them to explore how resolutions can be found.

The children also have the chance to learn how GPS tracking units work and to see the results of camera trap research.

At the end of the camps the children create wonderful posters showing all that they have learned about the snow leopard and its habitat.

That the children are learning and quite literally opening their eyes to wildlife protection is evidenced by their responses to the eco-camps.

"Before attending camp I saw only rocks and more rocks and now I notice everything and realise how beautiful it all is," said one boy aged 12.

"I never noticed the plants and the grasses but from now on I will see them and be interested in them," said another.

With young people hired from local villages and trained to help conduct the camps alongside teachers, the programme is building a huge sense of wonder, pride and ownership among the children in this part of Mongolia - something that they in turn take back to their families and communities and, we hope one day, to their own children too.

Thank you for supporting this valuable part of our conservation work that is aimed at providing understanding and long-term protection for these rare big cats and their habitats. 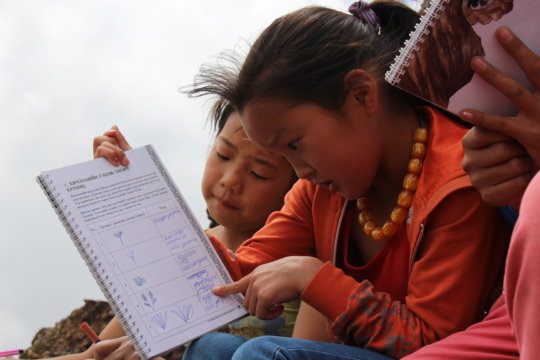 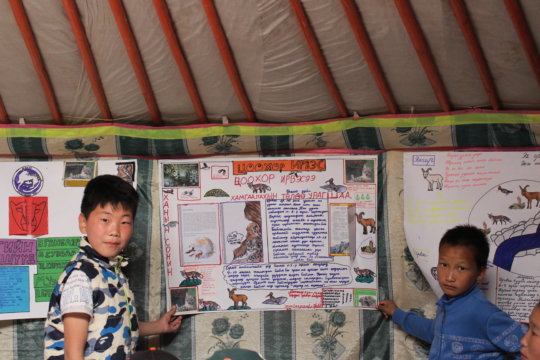 Colourful posters show what they have learned

On the cusp of survival

Snares are one of the biggest, indiscriminate killers of wildlife across Africa. Shockingly, an estimated 90% of animals snared are left to rot as the wires tighten to cause a slow and agonising death. That is why one of the most important jobs we fund is the removal of these silent killers - many set by locals for bush meat, many by poachers.

Every day, as part of their regular patrols, the anti-poaching units in Zimbabwe look for and remove snares; in 2016, they recovered over 1,100, in 2015 it was over 2,000. But, the areas they patrol and the distances that the painted dogs they protect cover, are vast and snares remain a major threat to the vulnerable populations of dogs in our care.

Earlier this year the team received news that a painted dog had been spotted with a raw and bloody wound around its neck - hallmark traits of a snare injury. They knew they had to act quickly before the snare tightened or the wound became infected but, finding and removing a snare from an animal that regularly travels many kilometers a day is never straight forward.

The team covered 100km from their base over five days as they searched for the injured dog. But, with only 150 left in the Hwange area, every painted dog is precious and they were not going to give up easily.

Eventually they spotted her, Cusp, a female from a nine-strong pack they knew as 'Broken Rifle'. Despite the livid, red wound around her neck she was keeping up with the pack which was stopping for no one! The team regrouped and decided that the best course of action was to wait until Cusp came to water to drink, dart her, remove the snare and treat the wound.

As soon as the opporunity arose the team moved in. Experts in this sorry work Cusp was soon unconscious and stabilized and the team were pleased to see no signs of infection and that the lesions were only surface deep and had not yet damaged her tendons or trachea. One of her teeth was broken, probably a result of frantically biting the snare, but Cusp would survive.

With the copper wire removed and the wound cleaned, Cusp was given a precautionary dose of antibiotics and a vitamin B injection to boost her immune system. Waking almost immediately the revival drug was administered she staggered off to recover in the shade. In the late afternoon she would wake up and hoo-call to her pack to re-join them snare free.

It is only with your support that the teams can carry out these rescues, ensure that everyone is properly trained and that they have the right equipment and medicines to save these rare animals.

Please, if you can, help us continue to fund the anti-poaching teams who remove the snares before these vulnerable and innocent victims suffer. Thank you. 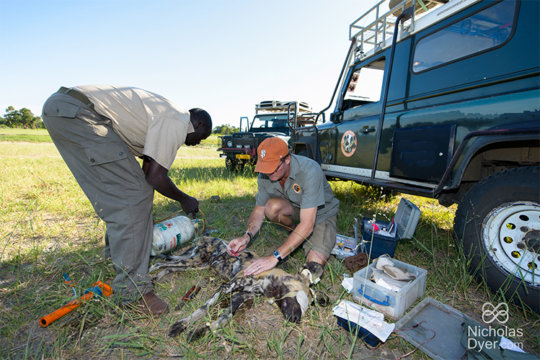 Working to save Cusp 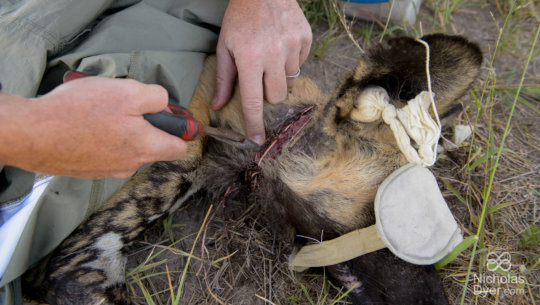 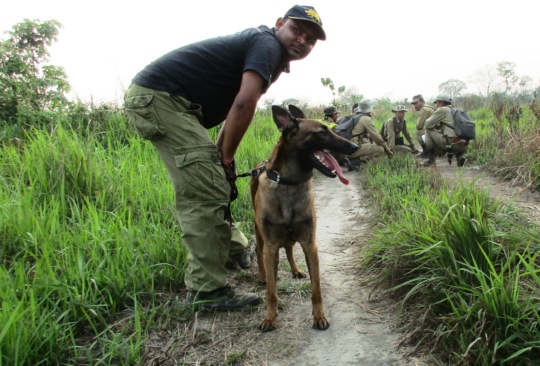 Babli at work in the field

Earlier this year we reported on the great news that your support had enabled us to fund a third dog for the anti-poaching dog unit in Assam. In fact, your support was so amazing that we were also able to fund a new vehicle for the team, hugely increasing their capacity and reach across key national parks and tiger bearing areas in Assam.

At a time when data from the National Tiger Conservation Authority (NTCA) in India reports that there have been 98 known tiger deaths in the country this year - a 25% increase on 2015 - protecting these highly vulnerable populations has never been more important. The good news is that known losses in Assam still remain low and, with your help and the expanded dog unit, we intend that it stays that way!

The hugely important K9 unit works on many levels to protect wildlife; the dogs ability to sniff out criminals helps unearth evidence and secure convictions; the presence of the dogs deters would-be poachers and the unit is a visual reminder of the zero-tolerance policy towards poachers.

Finding a suitable dog is, however, not the easiest of tasks especially with a project located in as remote an area as Kaziranga. With Jorba and Babli fully trained and making great strides in the field - Jorba has helped investigate six cases recently securing key convictions in all and Babli has been deployed to Manas National Park to assist the forest teams there - the third dog will provide a much needed boost to capacity.

Currently undergoing training at a para-military facility in southern India it is hoped that the new dog has the same temprement and enthusiasm as Jorba and Babli. We'll bring you updates as soon as we can!

Once again, a HUGE thank you from all of us to you, our invaluable supporters. These dogs are successfully challenging poachers and protecting wildlife and precious wild tigers thanks of your generous and continued support. We hope that the wild tigers we work to protect can continue to count on you into 2017. Thank you. 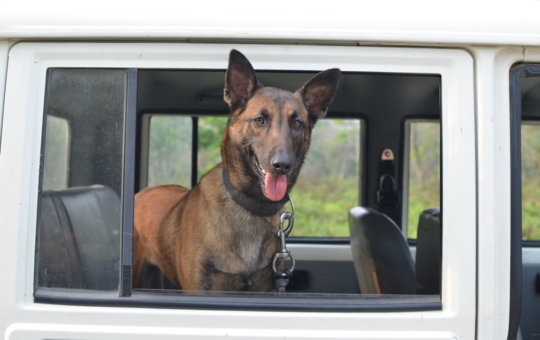 Babli in the new vehicle 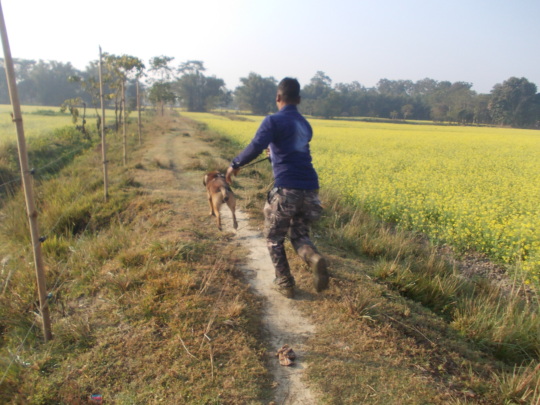 On the trail of poachers
‹ 1 ... 37 38 39 40 41 42 43 44 45 ›
WARNING: Javascript is currently disabled or is not available in your browser. GlobalGiving makes extensive use of Javascript and will not function properly with Javascript disabled. Please enable Javascript and refresh this page.