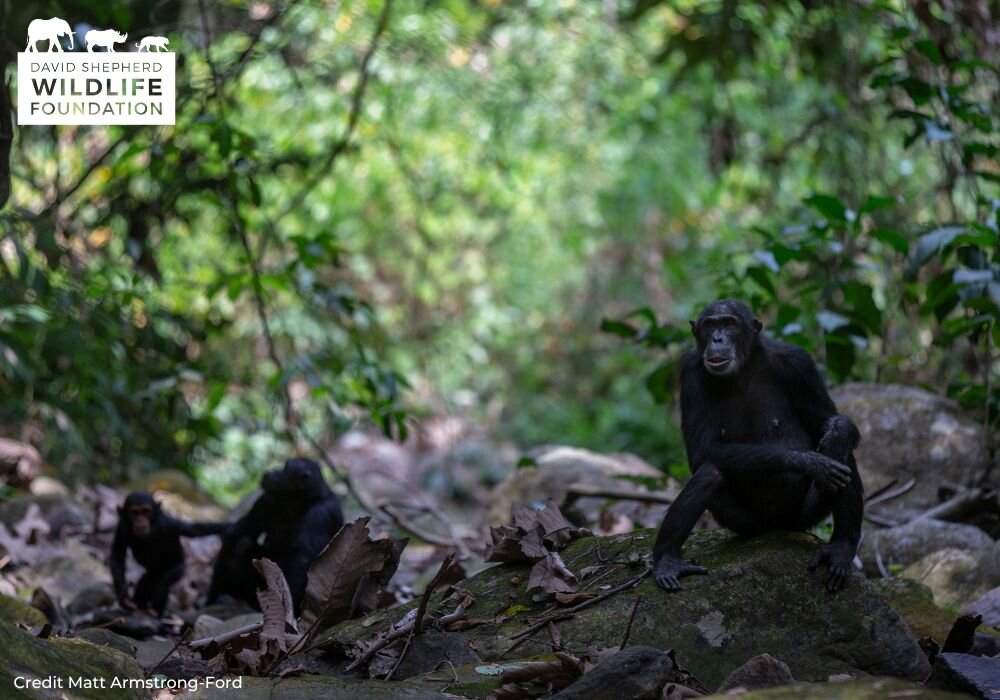 Chimpanzees, commonly referred to as chimps, share over 95% of the same DNA with humans. Every four hours, one chimp is being illegally taken from the wild to be traded as a pet or eaten as bushmeat. DSWF works with ground-based project partners who provide vital rescue, rehabilitation and release programmes for illegally trafficked chimps. We also lead educational initiatives attempting to reduce the local demand and raise awareness about the serious consequences of the illegal wildlife trade.

The illegal wildlife trade is one of the biggest threats to chimpanzees. Infants are often captured for the exotic pet trade and the devastating reality of these captures is that for every one infant taken, poachers will typically slaughter 10 adult chimpanzees, who fiercely protect their young. Other threats to chimps include the illegal bushmeat trade, human-wildlife conflict, habitat destruction and disease.

By adopting a holistic approach to conservation that fights wildlife crime, protects chimps and engages with local communities, DSWF works to reduce the threats to chimpanzees and create a positive and sustainable future for chimps in the wild.

Project Leader:
Theo Bromfield
Guildford, Surrey United Kingdom
$722 raised of $10,000 goal
You last donated to this project on
14 donations
$9,278 to go
* Amounts in US Dollars
Donate Now
Donate once
Donate monthly
$10
USD
Could provide educational materials to reduce demand in source countries for bushmeat
›
$20
USD
Could help buy fuel for a local teacher to access remote communities
›
$150
USD
Could help support a rapid response rescue mission to find and care for an orphaned chimp
›

Make a monthly donation & get matched today at 100% while funds remain. Terms and conditions apply.
Give the gift of stability in a time of instability. Set up an automatic, monthly gift now and get matched at 100%—because the COVID-19 pandemic has hurt us all, and it will take all of us to overcome it. Terms and conditions apply.
Monthly giving is as easy, safe, and as inexpensive as a Netflix subscription. Start a monthly donation to David Shepherd Wildlife Foundation today and get matched at 100%. Terms and conditions apply.
$10
USD
monthly
Could help provide educational materials to reduce demand in source countries
›
$20
USD
monthly
Could help to buy fuel for a local teacher to access local communities
›
$150
USD
monthly
Could help support a rapid response rescue mission
›

GlobalGiving
Guarantee
Donate https://www.globalgiving.org/dy/cart/view/gg.html?cmd=addItem&projid=40115&rf=microdata&frequency=ONCE&amount=25
Please Note
WARNING: Javascript is currently disabled or is not available in your browser. GlobalGiving makes extensive use of Javascript and will not function properly with Javascript disabled. Please enable Javascript and refresh this page.