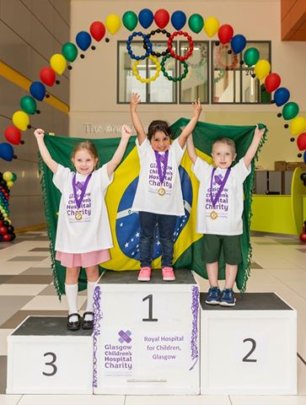 It was on your marks... get set... GOLD for a phenomenal 523 aspiring young Olympians at the hospital today!

A great big dose of Olympic spirit was prescribed at our sports day, which saw the boys and girls try out 10 different Olympic sports including tennis, cycling and archery.

The atrium, roof garden and wards were transformed into Olympic venues for the day, and everyone who took part received their very own gold medal and certificate.

Thank you as always to everyone who made the day possible, and in particular the Rangers Charity Foundation and Chloe McIntyre Memorial Fund who have supported our Play Programme with generous donations.

Keep your eyes peeled for more photos to come, and please do tag and share with your friends and family.

If our young Olympians have inspired you, come along and join us at our 10k Sponsored Walk and fun day on Saturday 3rd September:www.glasgowchildrenshospitalcharity.org/…/10k-sponsored-walk 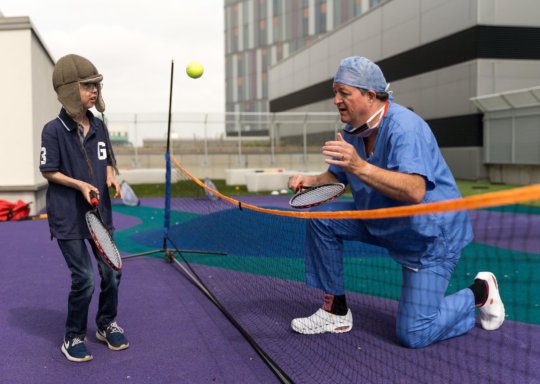 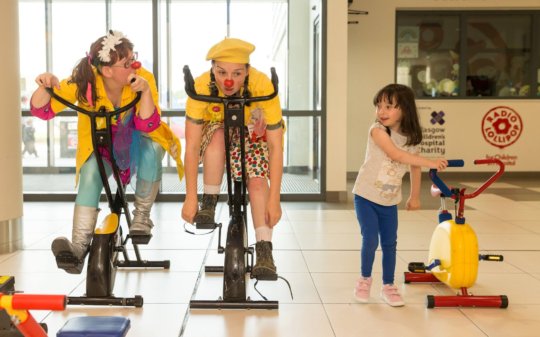 Climbing the Mountain Together 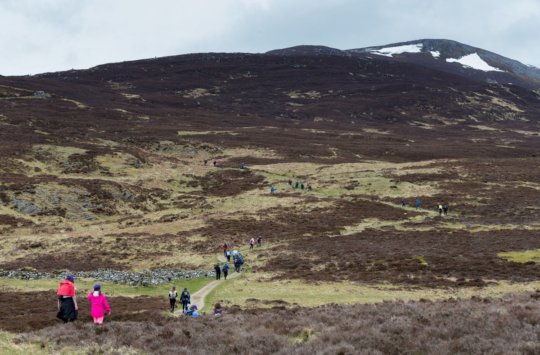 We start our ascent

Glasgow Children's Hospital Charity was delighted to organise a trip  for patients past and present from Ward 2A Schiehallion to pay a special visit to the mountain in Perthshire, Scotland which bears the same name.

The Oncology Ward at the Royal Hospital for Children in Glasgow is known as the Schiehallion Ward, and is inspired by the mountain and the challenges of young patients battling childhood cancer and rare blood disorders. Schiehallion mountain is famous for its many false peaks which symbolises the hurdles and our young patients face as they go through treatment.

Around 150 people – patients, families and hospital staff – visited Schiehallion in May to enjoy a memorable day in the great outdoors.

The trip gave young patients and families an opportunity to spend quality time together out with the hospital environment and for some, climbing the Munro signified an important milestone in their journey.

It was a wonderful day out and significant for many patients who were able to finally climb the Munro and plant trees around the site to mark their journey.

One child who took part was six-year-old Calum from Livingston. His dad Derek explained that Calum wasn’t able to take part in the trip last year as he was still recovering from a bone marrow transplant.

Derek said: “You get so used to seeing everyone in the hospital environment, you forget there is a wider world out there for everyone to enjoy. It’s great that Calum has made enough progress to come along. Next year we’ll look to climb the mountain itself”. Run in partnership with Ward 2A Schiehallion at the children’s hospital, the event takes place annually.

We would like to thank everyone who helped make our visit to Schiehallion so memorable including our wonderful volunteers.

Glasgow Children's Hospital Charity's vision is to help ensure that all young patients who are treated in Glasgow's Children's Hospital every year receive the best care and experience possible. We are incredibly proud to be able to help create such wonderful days for our patients and families, creating very special memories.  We would not be able to do this without the support of our amazing donors, thank you so much for your support. 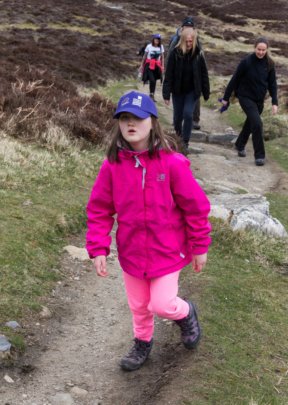 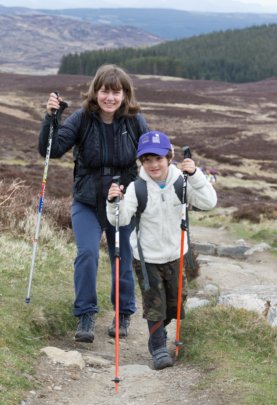 We will get there together 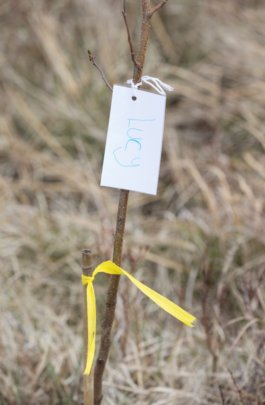 Always in our Hearts 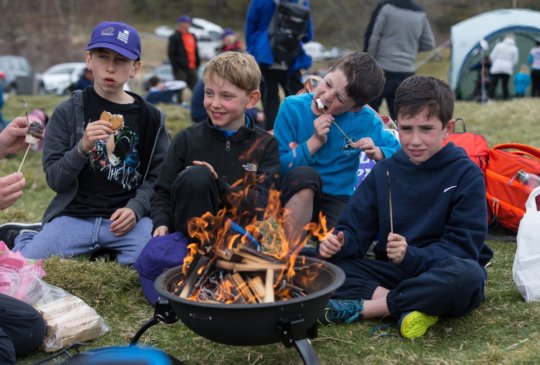 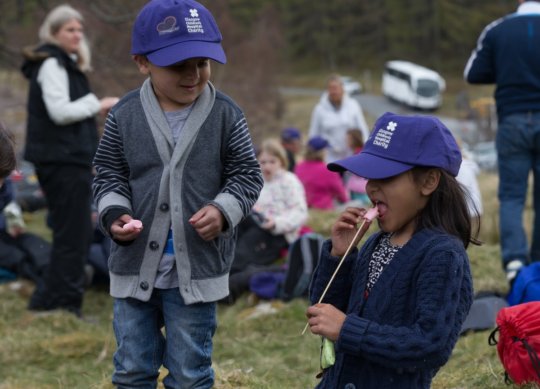 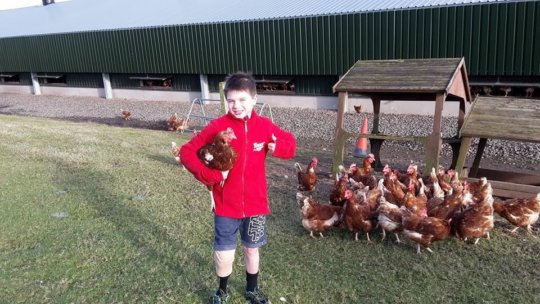 Glasgow Children's Hospital Charity is raising £150,000 to fund a surgical microscope at the Royal Hospital for Children. This piece of equipment will be used to help children such as Lewis, who required a lower leg amputation following an accident on his farm.

When Lewis, 8,  fell off the back of a quad bike on his family’s farm in Dumfries in October 2015, a lawnmower attached to the back of the bike almost entirely severed his leg.

Brave Lewis remained conscious throughout his ordeal and was even able to comfort mum Emily as he was air lifted to the Royal Hospital for Children in Glasgow. There, the medical team amputated his injured leg.

In the first of seven operations, parts of Lewis’s ankle were attached to his knee to allow a below-the-knee amputation. This will give him greater mobility and significantly benefit his recovery, helping him to get active and back into sport more quickly.

At the beginning of the year Lewis received his first prosthetic leg and is currently receiving physiotherapy as he learns how to adapt to it. He has already had a taster session of amputee football, and hopes one day to be able to ride a bike again.

Mum Emily said: “We have been on a rollercoaster ride since October 2015, none of which we would ever want to see or experience again.  Lewis has been an absolute megastar throughout and has never once complained about losing his leg.  He has charged on regardless and sees everything as a challenge but he was always that kind of boy anyway, a real outdoor kid.

“Glasgow Children’s Hospital Charity has played such an important role in Lewis’ recovery. It sounds very strange but thanks to the charity it was all a very happy time. All the kids were enjoying themselves and forgot why they were there. Everything seemed ‘normal’. We will be eternally grateful to them”.

“Part of his foot was attached to just below his knee as the bits in between were destroyed in the injury and not salvageable. While the operation was a success, he had to have extra operations to revise the reconstruction.

“I saw him recently as he was wheeling himself out of the hospital in his wheelchair. He was telling me how once he gets his prosthetic leg he is looking forward to learning to ski and snowboard. Without the operation he had, the options for this would have been more limited as he would have had to have a much more proximal amputation.

“While his multiple surgeries have been a success he and his family would have had a much less traumatic treatment course had, on the night of the injury, we had access to this equipment”.