What's Next, Now That People Are Living Longer? 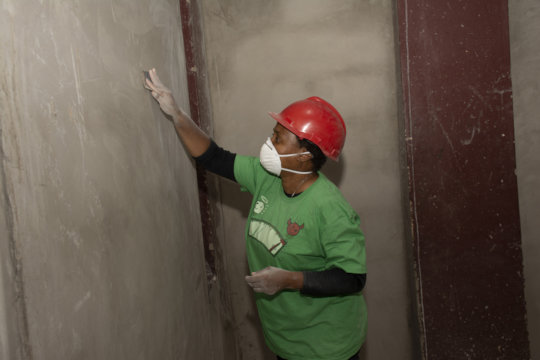 The life expectancy of an average Swazi was less than 35 years in 2007 according to a UNDP report dated March 2007. This figure was amongst the lowest if not the lowest in the world at that time. But today thanks to efforts by the government in partnership with non-governmental organizations like Kudvumisa the average life expectancy is now above 55 years. The question that quickly comes to mind for any average thinker is, “What’s next, now that the people are living longer?”

This is the question that Kudvumisa has been trying to answer since its inception in 2008. You should remember that well before HIV/AIDS became a global challenge, most of Sub-Saharan Africa has been suffering from chronic poverty due to a number of economic factors. And today despite the improved life expectancy most economies still remain in intensive care. What this means is that even though deaths from HIV/AIDS related illnesses have receded the people still need an income to keep them healthy. Kudvumisa, in order to help the people of Maphiveni and surrounding areas started a number of income generation projects that include the extraction of oil from marula and moringa seeds. The oil is then sold to upstream industries that manufacture cosmetics.

Apart from the oil, Kudvumisa also works with fishermen that catch crawfish from the many rivers and streams that meander across the region. The fresh fish is again collected by villagers and marketed by Kudvumisa thus providing a number of families with some income which is helping a lot of people to escape from the cruel bondage of poverty.

As part of community development, Kudvumisa is currently refurbishing the building adjacent to the clinic into a facility that will be used to process the marula oil, moringa oil and crawfish before delivery to the market. Regarding crawfish, the freshly caught fish will be boiled, packed, frozen and stored at the Maphiveni facility while awaiting shipment to local consumers and to South Africa. The crawfish for export will be cheaply packed for cost reasons as the buyers will do further packaging to suit their market. When fully operational the processing facility will employ about 6 people excluding those catching the fish and collecting the seeds.

In another separate project, Kudvumisa is in the process of renovating an old building into a guest house. The guest house is located just a hundred yards from the Kudvumisa offices. In addition, the organization is currently finalizing the paperwork for a commercial development project at Maphiveni which will house a well-known supermarket chain, other shops as well as a service station (gas station).

When complete all these projects are expected to employ hundreds of people and the income generated will be channeled back towards health delivery so that the clinic is self-sustaining and not continue burdening donors.

In a related development, Kudvumisa Foundation is now a member of Swaziland Fair Trade (SWIFT). The organization provides opportunities for economically disadvantaged producers apart from giving them training and advocacy support. By joining SWIFT Kudvumisa can now access a wider market for its products like moringa oil, marula oil, crawfish, glass and seen products. 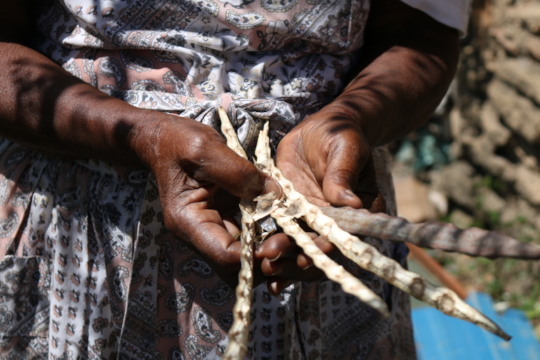 Kudvumisa Lauded For Its Approach to Health Care 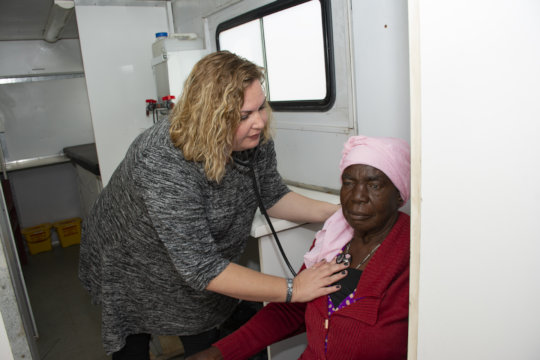 The Kudvumisa Foundation Has Been Lauded For Its Holistic Approach To Patient Care.

Kudvumisa, through its Community Health Initiative Program for eSwatini (CHIPS) operates in the Lubombo region of eSwatini formerly Swaziland. CHIPS uses mobile clinics to go into the hard to reach and isolated rural communities of Lubombo to conduct HIV tests among other activities.

But it doesn’t end there; the organization after giving a patient a positive result goes further to initiate them on ART treatment. After starting a patient on ART drugs the organization  goes a step further in making a follow up to see if the person is adhering to treatment or not. Furthermore, depending on the patient’s condition at any phase of treatment, CHIPS provides free transport for its clients to the nearest referral hospital, Good Shepherd Hospital which is some 50 odd km away from its Maphiveni station.

Speaking soon after conducting a training session on human trafficking at Maphiveni, the director for HopeAlive268, Lynda Hetrick Arroyo, commended Kudvumisa for its comprehensive approach to medical care for its patients.

“What separates them (Kudvumisa) from many organizations is that they are the true hands and feet of Jesus. They are doing the testing, doing the follow-up and sharing the love of Jesus which makes an incredible difference,” reiterated Lynda. “You are not just out there to give someone a positive to HIV test and leave them which leaves the people devastated. But you are making a follow up to make sure they are taking their ARVs and investing into the people’s lives.”

Kudvumisa’s unique but comprehensive approach to HIV treatment does not only focus on the patient’s health but also their economic situation. Because the majority of residents of the region are in living depressing poverty and their homes are not easy to reach due to poor roads many people are unable to get to the nearest health center. This is the gap that CHIPS is filling as they make forays into the communities to provide medical assistance. “This is a totally different concept to that being provided by other humanitarian organizations,” added Lynda.

Commenting on why Kudvumisa adopted this approach, Teresa Rehmeyer, Kudvumisa’s medical director said :“Because other organizations would just come and test and leave people with a positive HIV result it was like a death sentence in itself without helping to connect them to the much needed care and treatment. So after studying the situation, we decided to come in and fill in that void.”

Because of its approach Kudvumisa has won many hearts as patients feel loved and cared for. However, in order for Kudvumisa to continue running the mobile clinic and stock drugs there is a continuous need for funding. To date the organization has relied heavily upon individuals that give on a regular basis to this worthwhile cause. If you would like to know more about Kudvumisa’s activities please visit the website Kudvumisa Foundation. 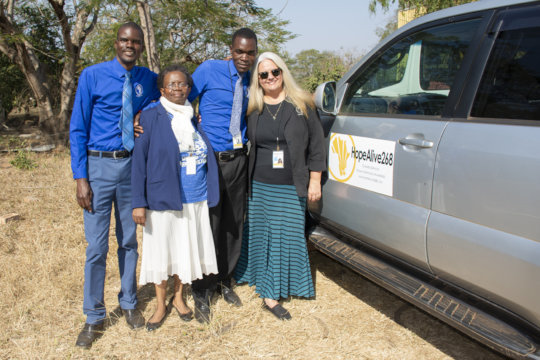 This is what we call Selflessness 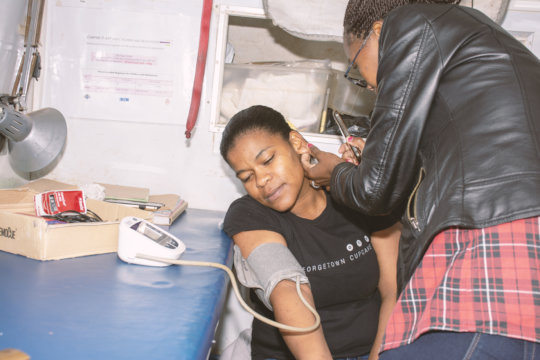 Tema attending to a patient

Tema always looks forward to the weekend. To her it is a time to spend some quality time with her very active 4-year-old son after a tiring week at work where it’s not unusual that she climbs a mountain or two in order to reach a patient’s home. Apart from bonding with her son, she and her husband use the time to watch their favourite shows on TV deep into the night as there will be no alarms set for work the next day.

One Sunday Tema woke up normally (late) around 9am. She wanted to do a couple of chores and make some breakfast before getting ready for church which starts at 12 noon. But at 10 am an unexpected call on her mobile phone would put all her plans into disarray.

The Kudvumisa office was on the line. “I am coming to fetch you Tema, get ready!” said Mr. Goodman with some urgency in his tone. Tema scurried into the shower and after a few minutes she was dressed and almost ready to go. But before she had even left the mirror her son came running, “Mummy, mummy it’s Zester!” referring to Mr. Goodman. True, Zester had arrived and was waiting in the car whose engine was still running.

Without much ado, Tema kissed her son and husband goodbye and jumped into the waiting car and off she went to attend to the emergency. Apparently a Kudvumisa client had made a distress call and wanted some emergency medical assistance.

Arriving at the patient’s home the team of Zester and Tema did some quick diagnosis and determined that the patient needed to go to Good Shepherd on the morrow. Meanwhile, they would put him on some painkillers that would relieve the pain until he saw the doctors at the referral hospital.

And guess what, by God’s grace Tema was back at home by 11am and she managed to attend her church service at 12 noon. When asked why she didn’t just defer her patient visit to the next day (Monday) this is what she said: “We don’t normally work on Sundays. But because we have a relationship with our clients we don’t want them to go without our service simply because it is a weekend or holiday. That is why I had to go there,” explained Tema. “Because I knew the history of the patient it was easy for me to tell the client to just wait for Monday but I couldn’t do that. We know our clients personally so it is hard to ignore them when they are in pain.”

Even though her Sunday plans had been interrupted she was all joy as she worshipped in church. Deep down in her heart she was relieved that she had helped someone in need, she had shown love and compassion to a neighbour despite it having cost her a hearty breakfast with her loved ones.

Tema’s response that Sunday showed that the staff at Kudvumisa Foundation has indeed fully embraced the vision of the organization. More so, they are ready to climb any mountain whether it is night or day, just to bring relief to the suffering and the distressed. 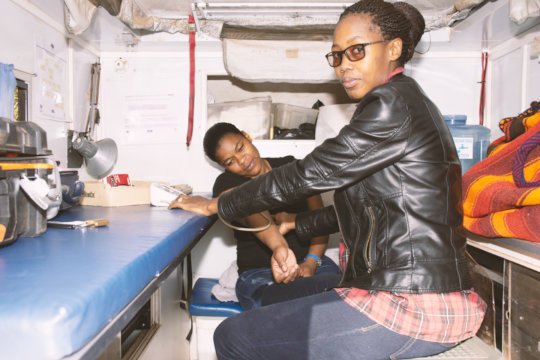 ‹ 1 ... 5 6 7 8 9 10 11 12 ... 26 ›
WARNING: Javascript is currently disabled or is not available in your browser. GlobalGiving makes extensive use of Javascript and will not function properly with Javascript disabled. Please enable Javascript and refresh this page.