By CREA - It's My Body Programme Team 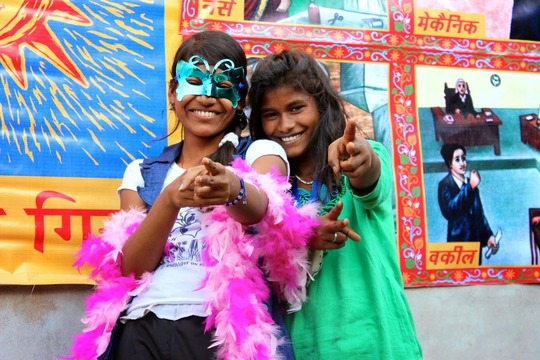 8 March, International Women’s Day was celebrated with great gusto by CREA and its partner organizations in the states of Bihar, Jharkhand and Uttar Pradesh (U.P.), India. 24 large-scale public events were organized by our partner organizations at the village, block and district level that enabled adolescent and young girls to raise issues of their safety, mobility, education, girls and sports, gender-based discrimination, health needs as well as leadership roles played by girls and women. Football matches, cycle races and other activities like debates, quizes, theatre, music etc. were created, performed and led by the adolescent girls participating in the program. Families of girls participating in the program, government officials, community leaders, health service providers and other community members attended these events. These events were also covered in the local media and were received well by the community members. Approximately 2500 people attended these 24 community-based large-scale events.

In April, CREA, along with six of its partner organizations in Bihar and U.P,  organized Leadership Development Camps for a select cohort of 60 girl leaders. These camps were designed and co-facilitated by Dream a Dream, Bangalore. CREA and these partner organizations worked directly with 750 adolescent girls in 2014- 2015 through a ten-month long curriculum on Gender, Sexuality, SRH, Life Skills and Human Rights through Sports. 60 girl leaders were selected from this group of 750 adolescent girls in U.P and Bihar based on their regularity of attendance, participation, initiative taken, support from families and interest in other program activities. The camps are organized as an extension to the curriculum based training to further strengthen leadership skills and capacities of the selected cohort. Different art forms and games were used during the camp to provide space to the girls to have fun and take them on a journey of self-reflection, reinstate the belief of adolescent girls of their abilities and provide them with a space to think about their future. The camp was successful in its approach and a transformation was observed in the participating adolescent girls. Girls who were quiet and shy opened up and took on leadership roles by the end of the camp. During the camp some of the girls shared their personal stories of struggle and ways in which they negotiated on issues related to their education, relationships and delay of marriage with their family and other community members. Towards the end of the camps the girls demonstrated increased in confidence and a vision for future.

As part of these camps, girl leaders are also encouraged to identify issues that concern them and find solutions to them in their communities. Some of the issues identified by the girls were –access to public grounds, better health services for them like iron tablets, sanitary napkins, HB testing, sanitation in schools etc. The girls in U.P further organized meetings in their communities with local Health Service Providers and Elected Women Representatives to share their problems and issues. These meetings have been instrumental in bridging the gap between adolescent girls and community service providers and leaders.

In our last update posted in the month of March, we mentioned the Sports Camps that were organized across 9 districts in the states of Bihar, Jharkhand and Uttar Pradesh. Sports is a core component of the It’s My Body program and is used to train adolescent girls on issues related to Sexual and Reproductive Health and Rights (SRHR). Organizing sports camps in the community made a huge impact on the girls. The camps were useful in building football skills for the girls, increasing the visibility and credibility of the program at the community level and in strengthening the confidence of adolescent girls to participate in a sport which his traditionally associated with boys. BBC Hindi recently covered this component (girls playing football) of the program and explored its linkage with improved negotiation abilities of the girls to delay early marriage.

Here is the link to the BBC Hindi article wherein the It’s My Body program was covered at one of CREA’s partner organization, Gaurav Grameen Mahila Vikas Manch (Bihar):

CREA along with its partner organizations is currently working directly with the second batch of 2000 adolescent girls in the three states of U.P, Bihar and Jharkhand in the ongoing It’s My Body, program. As part of the program, curriculum based training sessions through football with girls, school events, meetings with families of the girls participating in the program and meetings with local health service providers are being conducted. 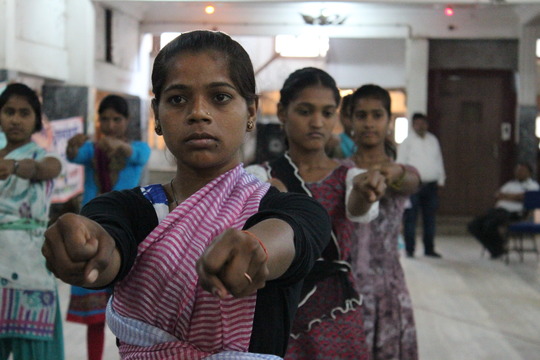 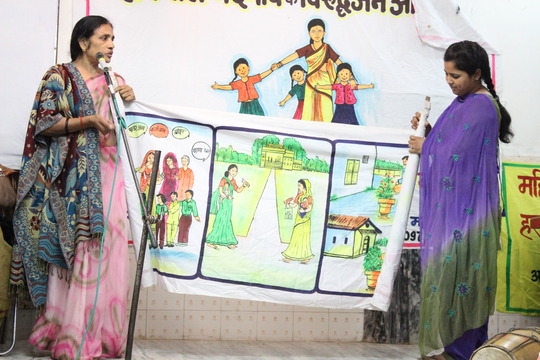 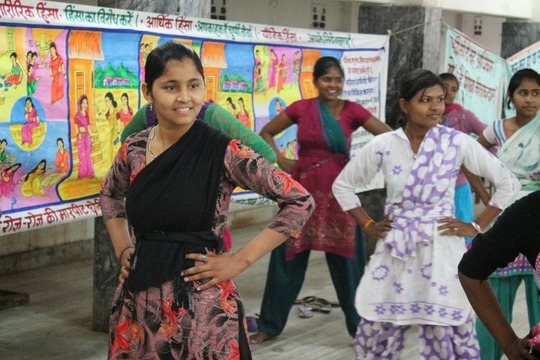 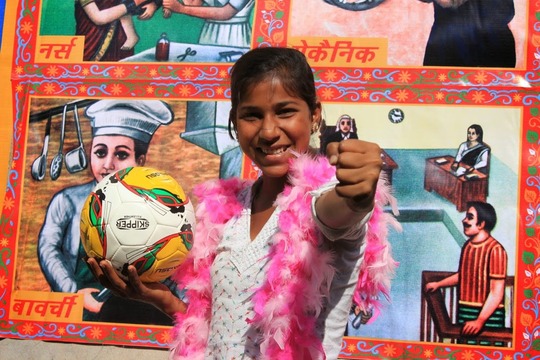 It's My Body! Programme - Update from the Field 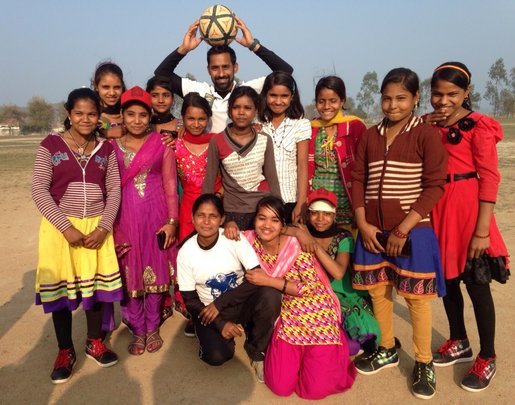 Thank you to our valued donors for your contribution and moral support. Since our last update, we have been able to raise and surpass the $6000 goal that was set. With this good news and a newly energized sense of hope, we have raised our goal to $10,000 and are now further motivated to reach out to a greater number of girls than the initial estimate of 130 girls.

In our last update written in early December, we mentioned that, as part of CREA’s IMB Programme, sports camps and trainings were being organized and set up for the months of January to March across 65 villages in 9 districts of the states of Uttar Pradesh (U.P.), Bihar, and Jharkhand in India. Since then, the sports training and coaching camps have kick-started in January 2015 and will be coming to a close in the upcoming month. These camps have been a major success, with a major turnout of girls and a greater level of support from parents and communities than anticipated, particularly in the state of Uttar Pradesh (U.P.). Without your invaluable contributions, this success would not have been possible.

Both male and female coaches (Shakti Singh, Nikhil Naudiyal, and Swati Singh) from Coerover Coaching Academy, an academy based in New Delhi and led by Bikram Singh Tockchom (Chairman of Soccer Foundation India and President of AMMA Football Club Andro – Manipur), facilitated the camps and trained a cohort of 300 girls across the states. From these girls, a selected group of 130 girl leaders from various gaons (villages) were given specialized training and guidance to mentor and coach other girls within their gaons. Sports equipment (including footballs, caps, shoes, and shirts), and food and water were provided to the girls during the days of the camps as well as transportation to and from their villages when necessary.

In the district of Mahoba, U.P. in particularly, the turnout of girls was unprecedented, with the number of girls that showed up far surpassing the expected 25-30 girls. The girls also brought along their families, including mothers and brothers, in support of their training, helping CREA reach out to the wider community that sees girls participating in sports as something to be proud of. Kalpanadi, a CREA staff member who helps facilitate the IMB programme in U.P., stated that “[T]here are so many people from the community here to see these girls – this is a wonderful sign and gives us hope for the future of these camps in Mahoba” (Translated from Hindi).

Towards the end of each session, the girls got together and shared what they had learned, whether they had enjoyed the experience, and if they wanted to continue to learn past the camps. Based on their stories during these closing meetings as well as their informal conversations with CREA staff, the girls were extremely enthusiastic and every single one enjoyed the camps and learned at least one thing about football. A vast majority wanted to continue to learn. CREA cannot thank its donors enough for your support to allow for these stories to occur and for giving our girls a new sense of joy and fun in their lives.

As one of our first IMB participants, Deepa, said:

“The biggest change in my life has been that I am now not scared to go out of my house alone. I never used to play kabaddi, kho-kho, and other games in my village, but now, not just me, but all girls, come out and play. We all support each other and we all go to school in Mahoba together on our bicycles. This is the biggest change in our lives—that our parents are supporting our decision to study until we want to.”

We hope that, with your support, more stories like hers can take place. Our current aim is to reach out to a greater number of girls - 200 girls - and continue to recruit and provide for the girls during these camps. We hope that you will continue to support our programme and help us reach our new goal to impact the lives of a wider community of girls in India.

An update on CREA's It's My Body! (IMB) Programme 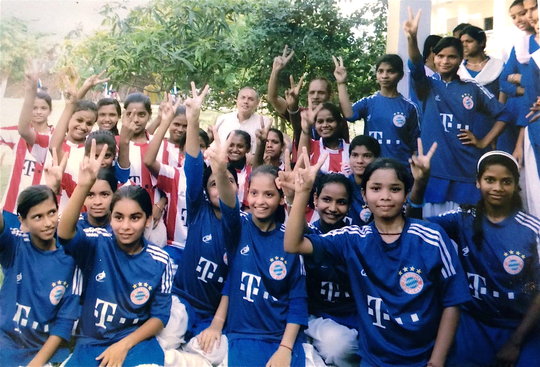 Thank you for your donation to the IMB Programme at CREA. With your invaluable contributions, CREA has been able to receive the necessary funding to further support this innovative programme.

CREA’s IMB Programme is an initiative that works with adolescent girls in India to advance their sexual and reproductive health and rights (SRHR). The programme, which has been conceptualised based on 12 years of experience working in the fields of gender, sexuality, reproductive health and rights, and women’s rights, uses sports as a medium of mobilising adolescent girls to affirm their bodily autonomy in the states of Bihar, Jharkhand, and Uttar Pradesh.

We work with 15 community based partner organisations in these states that inform adolescent girls of their SRHR in more traditional settings. Ultimately, the empowerment of adolescent girls through this programme will aid in combatting early and forced marriages, increase enrolment rates for girls in schools, improve health and SRHR services and facilities available at the community level, and, most importantly, allow our girls to recognise their independence and SRHR.

Now, in particular, is an exciting time for this programme. Our work is in full swing as CREA organises sports training and coaching camps (including the necessary equipment for them) for 300 adolescent girls in U.P., Bihar, and Jharkhand. These camps will be held across 65 villages in 9 districts of these 3 states and are scheduled to take place between January and March in 2015.

As a lead up to these camps, CREA, along with its partner organisations, is working on organising the logistics of these camps, finalising dates and venues, and confirming the participation of the girls who are part of the IMB programme. A selected cohort of 130 girl leaders from 13 partner organisations will receive specialised training and guidance to mentor and coach other girls in their villages. Coaches from Coerover Coaching Academy based in Delhi and led by Bikram Singh Tockchom (Chairman of Soccer Foundation India and President of AMMA Football Club Andro – Manipur) will facilitate these camps. With your support, CREA has already met with the sports coaches and is on a successful path towards having these camps come to meaningful fruition in the coming months.

Our girls are becoming empowered and believe in themselves, their abilities, and their agency more and more each day. As their journey continues, we hope to meet our goal of $6000 very soon and mobilise, collectivise, and empower an increased number of adoelscent girls through sports. We greatly appreciate you being a part of our efforts to end discrimination and violence against girls and young women and to advance their sexual and reproductive health and rights. We will continue to update you of our activities in the coming months as our camps kick-off in January 2015.