Where will Anne and Angel be on Thanksgiving Day? 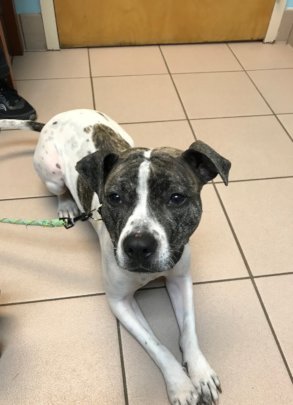 According to the “2018 Annual Homeless Assessment Report to Congress”, New Jersey had 10 in every 10,000 people experiencing homelessness or 6,048 individuals.  In the United States, 552,830 people were homeless on a single night.  How many have pets?  We estimate that there are over 138,000 pets with their homeless people.

Anne and her emotional support dog, Angel, have been living on the streets of Vineland, New Jersey for the past two months. Anne has had Angel for the last year and a half and states she looks and sounds like a cow. Angel has some separation anxiety because she had four different owners before Angel and Anne found each other.  Over the last few days the weather in New Jersey hit record breaking cold, wind chill, and snow. The news was calling it an “Arctic Blast” that should last for several days. Angel is 2 years old, extremely energetic and vocal that posed difficulty when trying to find shelter from the storm.

Luckily, Anne and Angel found an amazing volunteer at a “Code Blue Warming Center” to assist during the storm. When a code blue is called the homeless have access to shelters and drop in centers.  During storms like this one hitting the east coast the network admits as many people as possible.  Anne was able to get a spot with Angel, but her activity level and vocalization was problematic for other residents. The volunteer, Danielle, pulled resources together and found a local boarding facility that often works with domestic violence victims and their pets.  The facility agreed to take in Angel during the cold snap, but Angel needed to be vaccinated before she could be admitted.

Danielle called Pets of the Homeless™ and connected us with East Oak Animal Hospital who agreed to provide the required vaccinations at a discounted price. In less than two hours, Angel was receiving her vaccinations.  It was a win all around. Angel is safe and warm. Anne will stay in the shelter knowing Angel is being cared for and Pets of the Homeless™ gained a new veterinary partner. We are grateful for nonprofit volunteers like Danielle and amazing programs like Code Blue that assist our vulnerable populations and their pets.

The Holidays are a time to celebrate with family and friends but for the homeless their pet may be their only companion.  While we are blessed with abundance many are not, you can help us help them by making a gift to “Feeding Pets of the Homeless”.

Dogs of the Homeless - Tinkerbell, Chloe and Ashley 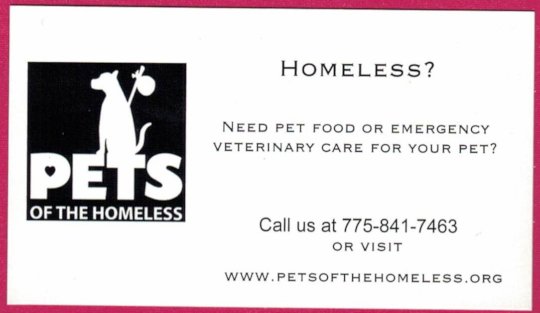 Give this to a homeless person with a pet

Every day we see an increase of homeless callers asking for our help.  This will help to explain why:  In an official UN letter to the US written in March 2019 – “More than 7,400 families are evicted in the US every day, resulting in the eviction of millions ever year.  Rents in the US increased by 22 percent on average between 2006 and 2014, while average incomes decreased by six percent.”

It is no wonder that homelessness across the US has increased.  When you have a pet, the choices get complicated: a roof over your head at a shelter where pets are “not allowed”, relinquish the pet to an animal shelter or sleep in your vehicle or the street with your pet.    Most choose to keep their beloved pets.

Since we do not receive government funding, we rely on your support to help us pay for emergency cases like these recent ones below.  (Note that some photos may be distrubing)

Laura called Pets of the Homeless in July of 2018 seeking assistance for her dog, Tinkerbell, a 7-year-old female Chihuahua who had a hernia. Laura stays in a tent on the riverbed in the Ramona, CA area, and is disabled and receives SSI and food stamps.  We approved an examination; however, she was not able to make her appointment.

Laura called us again in January of 2018, which is when we began verifying homelessness.  We interviewed her again at that time.  However, she did not have anyone call us to verify her homelessness.

We received another call from Laura in October stating that Tinkerbell still has a hernia and that someone called Animal Control about Tinkerbell.  The officer was requiring that Tinkerbell have an appointment at a veterinarian to evaluate the hernia within a few days.  Laura asked if the officer could verify her homelessness.  We said “yes”, and the officer called us about a week later and verified her living situation.  We then were able to approve an examination.

Our Case Manager finally located a veterinarian who could do the surgery, Country Pet Hospital in Alpine, CA.  After discussing Tinkerbell’s condition and Laura’s situation with the Office Manager, she spoke with the doctor.  The doctor said he would do the surgery for our funding limit unless of course the condition was worse than expected.   Laura scheduled an appointment with the hospital for October 23, 2019.

When Laura arrived with Tinkerbell, the Office Manager called us and asked if we had seen the hernia.  We had not.  She sent us the above photos. She said the hernia was very bad and the doctor was concerned that the muscles may be too weak to hold the stitches and he would do the best of his ability to fix the hernia, and also spay Tinkerbell as animal control required.  After the surgery, the Office Manager said there were two hernia holes that needed repair and that the surgery went well.  The Animal Control officer called and they confirmed the surgery including that the spay was completed.

Chloe is a 10 year old spayed female Sharpei Boxer mix who lives with her homeless human, Marcus, in a tent on BLM land in the Rogue River, OR area.  Marcus called us because Chloe’s leg was swollen badly for about 2 months now and she has been crying out in pain.  We verified that Marcus is homeless and approved an examination at Animal Clinic of Rogue River.

The veterinarian called us after the examination.  Chloe has a very large lipoma, causing impinging on nerves and muscle.  The estimate to remove the lipoma was $600 - $815.    We immediately approved a cytology.

The lipoma is pressing on nerves and the muscle that causes the leg to be intermittently lame.   The veterinarian said it is big and wraps around half the leg.  When he gets in there to surgically remove it, he can usually peel it out.  He will not know until he starts the surgery.  He said it is definitely causing pain.  We approved the surgery to remove the lipoma.

Bill from Oric, CA called us because his spayed female Border Collie mix had an ulcerated tumor on her side. Ashley is ten years old and Bill got her from a friend who passed away. He has taken care of her for 4 years and reached out to us seeking compassionate care. Ashley’s mass on her side was open and raw. She would lick, chew and scratch at it. Ashley and Bill live in their tent in a thicket near the freeway. A homeless outreach team gave Bill our phone number to get Ashley assistance.

We are grateful that we were able to form a new partnership with Sunny Brae Animal Hospital. Dr. Hight and the office manager provided a seamless service in this urgent situation. Ashley had surgery and important evaluative care. Pets of the Homeless™ provided over $750.00 in surgical care and Sunny Brae provided $179.05 in discounted services.

If you have any questions please feel free to contact our national headquarters.

Joining Hands and Paws Across the Country 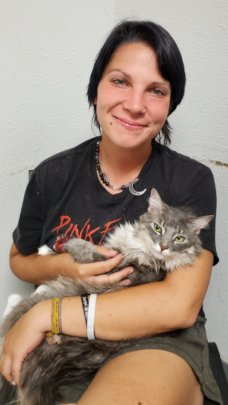 Jessica has been homeless living in her van for two years with her companion, a spayed one and half year old cat named Nova.  Jessica receives food stamps.  She and Nova live in Cave Junction, a small rural city in Southwest Oregon.

A dog had attacked Nova that left her left front paw partially severed.  Jessica drove 54 miles to the closest emergency veterinary hospital.  Jessica could only afford pain medications and have the paw bandaged. She spent the weekend calling around to charitable organizations because she could not afford the cost of the needed amputation.

After qualifying for benefits through Pets of the HomelessTM, we set out to create a new partnership with a local veterinarian. We contacted a hospital who quickly agreed to a partnership including discounted medical services. We were able to get Nova into the hospital that same day.

Nova was anesthetized and surgery for amputation was performed.  Later that evening, Nova awoke from anesthesia and acted just like her normal self. Pets of the Homeless spent $603 on her care and the vet provided $67 in discounts.

Jessica called Pets of the Homeless to say how thankful she was for our assistance.  She also said how wonderful and caring our new partner vet was, and how they treated her extremely well.  She could tell that they all really cared about Nova.

On behalf of the six staff in our office, our Board and myself, we thank you and appreciate your support.

If you have any questions about our four unique programs, please do not hesitate to call me at 775-841-7463 or email me at gf@petsofthehomeless.org