Singing in harmony with hearing-impaired children 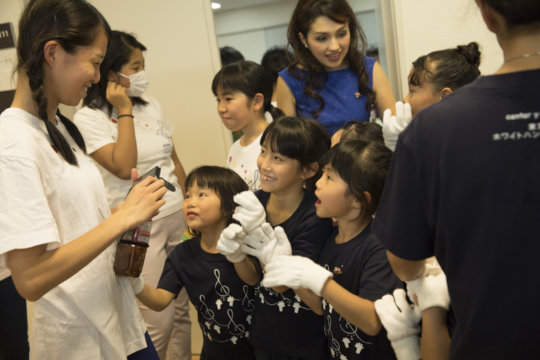 It was the day before the concert when the two groups of children met for the first time. The Soma Children’s Chorus has experience of singing with other choirs and orchestras but has never sung with children who cannot hear yet express the world of music through corporal movements – particularly, by the use of the white gloved hands as symbol. So, the children of the Soma Children’s Chorus were excited but at the same time a little anxious when they got together with the Tokyo White Hands Chorus and started practicing “Momiji (Autumn Color of Leaves)”, a very popular nursery rhythm depicting the beauty of the Japanese mountains aflame with autumn color.

“It’s a totally inspiring experience. I’ve never imagined expressing this song in such a way”, said Aya, a mezzosoprano, observing how the children of the Tokyo White Hands Chorus eloquently communicate the vivid autumn colors without using voice but their hands and other body parts. “Depending on how we engage corporal movements, the colors of leaves can change”, describes Hikaru, a hearing-impaired high school student from the Tokyo White Hands Chorus.

The concert represented an opportunity for the two groups of children to interact and learn from each other. They “sang together” 5 songs – the Soma Children’s Chorus with its beautifully resonant voice and the Tokyo White Hands Chorus with its magically flowing body movements. Two pieces put together, the children completed the very unique art of music.

“Through this experience, I learned we can communicate with each other just by means of gestures”, said Nako, another mezzosoprano, who never had the chance of mingling with hearing-impaired children prior to the concert. It was also meaningful for the members of the Tokyo White Hands Chorus. “Regardless of hearing abilities, we could become friends through music. Now I want to become friends with everybody around the world who may be living with many different types of disabilities”, Misaki, a 3rd grader of the Tokyo White Hands Chorus, shared her passion.

Thanks to the generous supporters like you, we can organize events like this El Sistema Gala Concert and bring together children of different backgrounds. We strongly believe in the value of accepting differences and promoting an inclusive society through music. We assure you that your contribution has been and will continue to be used in a meaningful way. We appreciate your support from the bottom of our hearts – thank you! 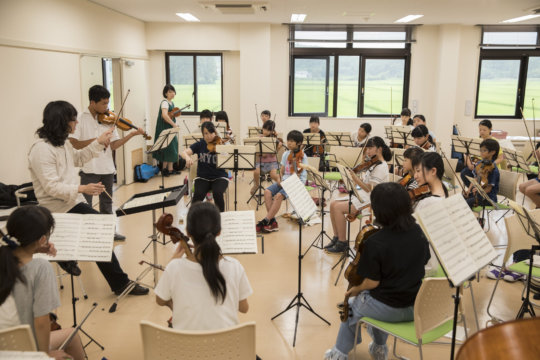 Soma boasts its extensive rice paddies. They become so lush and green in the summer, exhibiting a sense of peacefulness. The town, however, still remains negatively affected by the 2011 Great East Japan Earthquake and the following nuclear accident. Crops sales are not on the up because of the persistent reputational damage caused by the nuclear meltdown. Local fishermen continue suffering from reduced catches of fish and shellfish. Otsuchi, where the Otsuchi Children’s Orchestra was formed nearly 3 years ago, is another coastal town impacted by the 2011 disaster. It has been experiencing a significant population decline, which led to consolidation of local schools.

Despite the challenges, the children from the two places are striving hard for their dreams. “I enjoy playing in the Soma Children’s Orchestra because we help each other, teach each other and become better players all together”, says Haoto, a 6th grader violinist. She joined the orchestra 4 years ago and has made many friends since then. “In the Soma Children’s Orchestra, it does not matter if you are in different grades or go to different schools or whatever. We grow in connection with others”

An orchestra is composed of individuals, all performing their own roles yet expected to be in sync with one another. When teamwork is in place, it delivers harmony most beautifully. Michitaro, a 4th grader violinist from Otsuchi, says, “I go to the El Sistema Japan’s string class three times a week. My friends join me there, and we all play together. That’s what I like about it.” At the summer camp, he and other children of the Otsuchi Children’s Orchestra had a chance to play Pachelbel’s Canon D and Mozart’s Eine kleine Nachtmusik with the Soma Children’s Orchestra. “Because there were more of us participating in one orchestra, there were more mistakes we made. So, we had to practice again and again, but I liked it. Our music became more sublime”, Michitaro described with enthusiasm. It was a whole different experience from the Otsuchi Children’s Orchestra practicing alone, and the same went for the Soma Children’s Orchestra.

Thanks to the generous supporters like you, we can provide free music education and organize events like this summer retreat for children. We assure you that, despite various hardships, the children are building life skills by the means of creating music with others.

We appreciate your continued support from the bottom of our hearts – thank you! 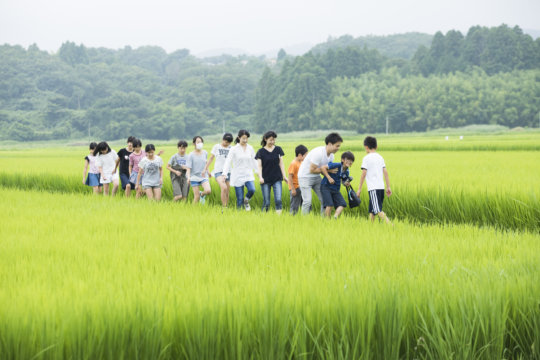 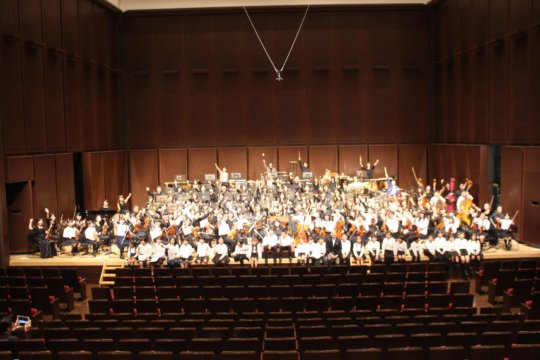 The Soma Children’s Orchestra traveled to Tokyo and participated in “El Sistema Japan Orchestra Festival” late last month. It represented an extraordinary opportunity for the children not only to visit Japan’s metropolis with peers but also to explore and create harmony with those who are coming from different backgrounds.

50 children left Soma, Fukushima Prefecture, for Tokyo early in the morning. Ahead of them was a long bus ride to Tokyo, but the children never seemed to bother. “It’s always fun to travel with friends”, smiled Hinano, a 3rd grader girl who joined the Soma Children’s Orchestra 4 years ago.

As soon as the children arrived in Tokyo, they joined a rehearsal with the members of other orchestras – specifically, the Otsuchi Children’s Orchestra, the Fellow Orchestra and finally the Hands On Orchestra. What is interesting and challenging about “El Sistema Japan Orchestra Festival” is to bring together these orchestras of different backgrounds. To briefly introduce the other orchestras; the Otsuchi Children’s Orchestra is another El Sistema-inspired program from the tsunami-affected small town of Otsuchi, Iwate Prefecture. The Fellow Orchestra is a Tokyo-based group of adults, including professional musicians, while the Hands On Orchestra is composed of 7 elderly ladies who just started learning the violins. “This event is all about the participants realizing a sense of unity by overcoming the differences in age, hometown, affiliation, proficiency and life experiences“, said Yutaka Kikugawa, Executive Director of the Friends of El Sistema Japan.

Till the last minute, over 130 members from 4 different orchestras practiced together in search of ‘united music’. The tickets were nearly sold out, and the audience was impatiently waiting for the curtain to be raised. The musicians dressed in black and white appeared on the stage. They all seemed very nervous. Once they started playing, however, they gradually looked uplifted and happy getting into the rhythm of music together with others on the stage.

The differences exist among the participants, but they also have things in common. That is, they all love music and believe in the power of music. “Playing the violin, I was filled with a sense of togetherness. It was such a great feeling”, said Takayuki, a freshman who played the role of Concertmaster at “El Sistema Orchestra Festival”.

Thanks to the generous supporters like you, we can organize events like “El Sistema Orchestra Festival” and let the children in Soma experience and build connections with the outside world. Through this event, the children learned that they can go beyond borders and deepened their appreciation for music. We appreciate your continued support – thank you!