The World Children's Music Festival in Tokyo, which took over three years of preparation, was finally held in Tokyo Metropolitan Theatre on 29th March 2021. Some audience virtually joined and others managed to come to the concert hall but all seemed really satisfied with the performance.

Initially, in April 2020, on the 250th anniversary of Beethoven's birth, the concert's primary purpose was to perform Beethoven's Ninth Symphony with musicians from El Sistema and related countries, mainly from four locations in Japan and children from eight countries around the world.

Due to the COVID-19 pandemic, the event was postponed to August 2020. It soon became apparent that this would also not be possible and that our friends from overseas would not be able to join us on stage. However, we kept our hopes high that the situation wouldl improve over time, and the children will be able to sing Beethoven's Ninth by March 2021.

Despite our hopes, all choir activities were suspended when the Tokyo metropolitan area declared a state of emergency at the beginning of the year. Not sure about how many children from Soma would be willing to travel to Tokyo in March, we made the difficult decision to give up on Beethoven's Ninth's performance. The piece that would replace this monumental piece was Beethoven's Fifth Symphony, which was the first orchestral piece that the Soma Children's Orchestra performed five years ago. The chorus changed program to Mozart's "Ave Verum Corpus," a piece that the children of Soma sung many times in memory of those who died in the earthquake, and "Ametsuchi no Uta (Song of Nature)" by Maki Ueda and Nozomu Hayashi, a work that the children of the Tokyo Whitehand Chorus practiced online throughout lockdown.

Will the wind instrument section be able to prepare such a monumental work with just two months of preparation? Will the chorus be able to resume practice before the concert? On top of all the uncertainties, a large earthquake hit Soma at the end of February, causing one of our precious rehearsals to cancel. Our conductors, Mr. Kimoto and Mr. Furuhashi, were beyond worried.

We would like to thank all of our supporters, parents who have encouraged our children, teachers who have taught our children both online and in-person, all our staff members, interns, volunteers, and, of course, the children who continued to strive to enjoy music and had the courage to move forward with their peers.

By Asumi Ueda and Mika Kakihara - Communication Officer and Translator 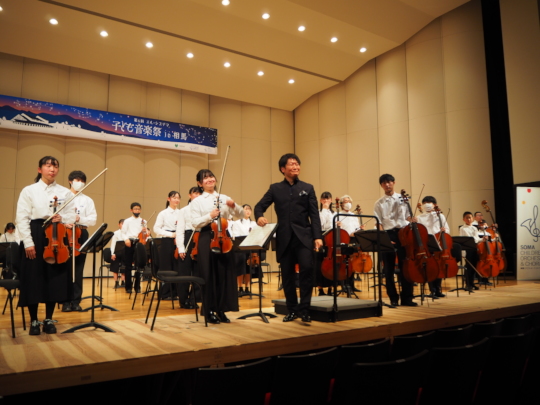 The year 2020 was full of unimaginable events. We had originally planned our 6th El Sistema Japan Children’s Music Festival in Soma in March 2020. Like many other events, that was postponed due to the pandemic and finally held on December 27 at Soma Civic Hall with a modified program. Last year, while lessons were suspended and the future was uncertain, the children patiently kept practicing. The year-long effort resulted in a great performance, followed by a storm of applause from the audience in a warm atmosphere on a cold winter day.

“On the day, I was so happy just to see such a large audience despite the situation and that we were able to perform in front of them,” said Momoka, the concertmaster, after the concert. “When we were getting ready and about to perform, I felt a lot of tension, not from nervousness, but from the huge anticipation that you feel when you are really excited. That feeling for the first time in a year almost made me cry. I don't know how to put the joy of performing into words, the whole performance felt like an instant, and I really didn’t want it to end in a way I had never felt before. Just after the concert when teachers told me one after another that the performance was great, I cried so hard that I couldn’t speak.”

For Nanami, the chair of viola, “this music festival was extraordinarily special." She continued, "the festival and the rehearsals towards it brought us, the Soma Children’s Orchestra, a lot of progress. Making efforts for each other, helping each other, laughing together, we worked hard to play in ensemble and to make good music. Those moments are so precious in terms of time and memory. Nothing can replace them and the experience will always stay vivid in my mind. We are not professional musicians, but I like the sight and time that we played together more than any other beautiful, skillful performance. I think our performance was so original, wonderful, and full of memories that, years later, I will still want to listen to it.”

El Sistema Japan is now preparing for an upcoming concert, the World Children’s Music Festival 2021 on March 29 from 6 pm JST (https://www.elsistemajapan.org/wcmftesteng), which will be broadcasted globally. This was originally planned in March 2020, and rescheduled for this date in a new form.  We would be pleased if you joined us online (https://worldchildrensmusicfestival2021intokyo.zaiko.io/buy/1pre:c5M:8e8c3).

Growing Together, Regardless of Age or Instrument. 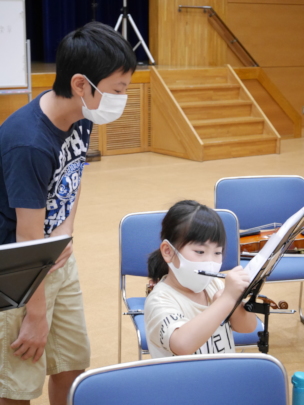 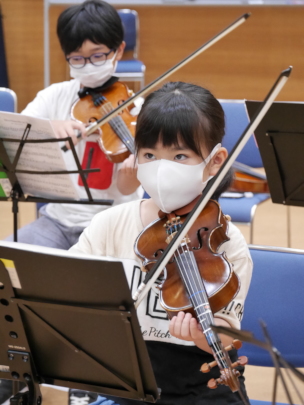 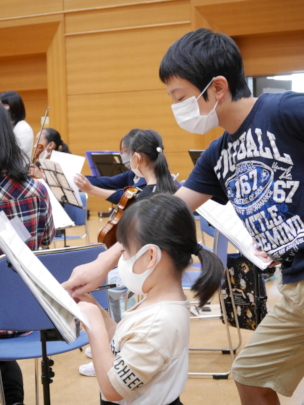