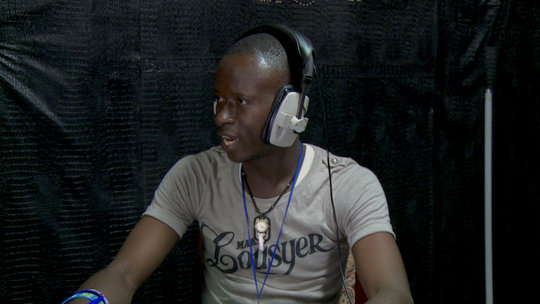 The smooth voice of Marlon Johnson, a Liberian radio personality, is a staple of the country’s national airwaves. Today he is an Ebola survivor advocate who hosted PCI Media Impact’s radio call-in show Ebola Is Real — part of our #ISurvivedEbola campaign. But Marlon was not always an outspoken defender of this stigmatized group.

“When the PCI Media Impact program started, I was contacted, and it came to be that I would be doing the show. But they didn't tell me that I would be interacting with Ebola survivors,” Marlon said.

Like many West Africans, his fear of the deadly disease was understandable: Ebola has wrecked havoc on Liberia in the past year, stealing well over 4000 lives from the small country. Without knowing that Ebola survivors can no longer fall ill from the disease or pass it on, he was hard pressed to interact willingly with affected individuals.

“The day came when my boss told me that today I would be hosting an Ebola survivor [as a guest on the show],” Marlon explained.

“And I said ‘WHAT? An Ebola survivor?’ And he said yes. So I thought ‘no, not me. This disease is very contagious, so I cannot, I cannot do it.’

“When [the Ebola survivor] Korlia came, and I saw Korlia, I got afraid. So I said no, I’m sick, I can’t do the program today. But I was not really sick, you know — because of fear, I walked away.”

Later on, Marlon confessed that he had not been sick, but afraid of catching the deadly disease. His boss took the opportunity to explain why interacting with Ebola survivors would not make him sick; and after that day, Marlon came to himself and started hosting survivors on his show.

“It turned into action then,” Marlon said.

“The second survivor on the show was Foday. Foday, the guy who took the ambulance and saved the boy. After that day, I came to be confident that these people were so easy to interact with, and now we talk almost every day.”

Shedding stigma against Ebola survivors proved simple for Marlon, once he was given reason to hear the narratives of those who face it.

Marlon's story reveals the key to our #ISurvivedEbola work: the individual engagement, transformation and reflection that a project like this aims to trigger. Powerful, community-driven storytelling is only the first step — a first step proven to create empowered, lasting social change through dialogue and empathy. 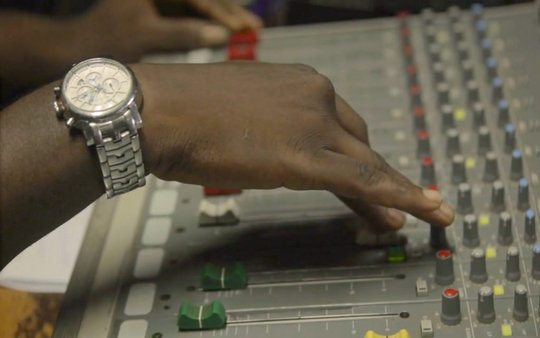 A sound mixing board is adjusted for broadcast.

From the Source: Why Survival Stories Matter 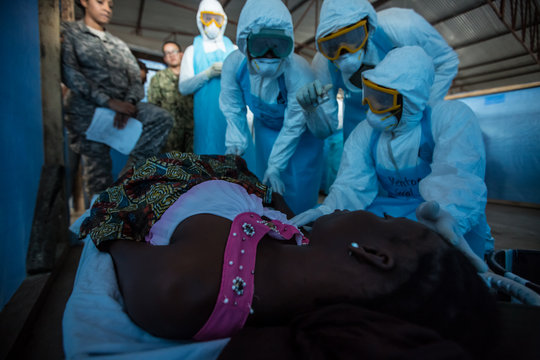 It has been several months since Josephine Karwah, a young Liberian, made headlines as the first pregnant woman to survive Ebola.

These headlines of hope have faded from the world’s attention, but Josephine is still left with the effects that many Ebola survivors must now face: a decimated family, a changed relationship with her community that was hesitant to re-embrace her, and all of the medical and financial implications of her near-fatal illness.

Josephine is one of many survivors who have shared their stories of resilience and strength with the #ISurvivedEbola campaign. Our team knows her story well: we captured, produced and disseminated videos about her life-saving decision to seek early treatment, her hard-won recovery and her struggles with resistance to depression in the aftermath of trauma. We posted it on Facebook and in web segments. We shared, and continue to share, Josephine’s story along with the stories of 29 other individuals who have survived Ebola.

When PCI Media Impact first set out on our ambitious emergency mission last November, we understood that the stories of survivors would be a compelling way to share lifesaving messages and, at the same time, reduce stigma. But there were so many unknowns: would survivors like Josephine want to work with us? Would radio and television broadcasters think that our content was valuable? In countries flooded with messaging and frantic Ebola response efforts, would this campaign make a meaningful difference?

Josephine is one of the many proud and resilient survivors who are turning their painful experiences into tools to educate and to heal. Josephine helps by working to strengthen her neighbors through compassionate training with Ebola Treatment Unit workers.

Last month, I met Josephine at the PCI Media Impact office in Monrovia.

“You know, when they first asked me to be part of the campaign, I didn’t want to tell my story,” Josephine confided to me.

“But finally, I did; and as I told my story, I felt myself getting stronger. I kept telling it then, more and more. And now, every time I tell it I feel stronger still.”

Since hearing how the #ISurvivedEbola campaign affected Josephine, I have not stopped sharing her words with our team members and supporters. She embodies what our project is all about: finding the human resources within communities themselves to instigate change; creating space for those strong, positive role models to share potentially lifesaving messages; and watching their unique behaviors — their “positive deviance” — spread like wildfire, changing the lives of those that seem the most resistant to change.

The first-hand survivor stories and the fictional radio drama that make up the #ISurvivedEbola campaign have already reached millions of people through radio, television and community screenings in Guinea, Sierra Leone and Liberia. Audiences are connecting deeply with both the real life individuals and the fictional characters that make up the campaign. This connection has resulted in changing knowledge, attitudes, and practices in West Africa. As one radio host said, “When I first learned I would be having Ebola survivors on my radio [drama] call-in show, I called in sick because I was afraid of them. Now survivors are my friends, and I encourage everyone to have friends that are survivors”.

PCI Media Impact’s #ISurvivedEbola campaign is sharing hope and saving lives one story (and one survivor) at a time! 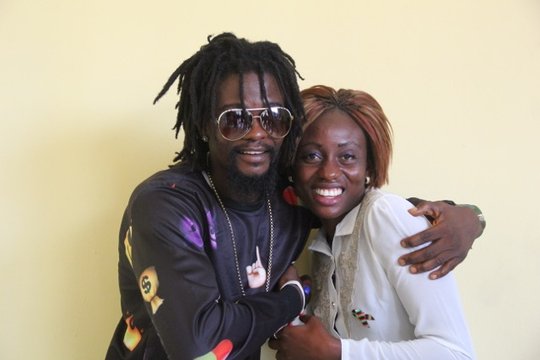 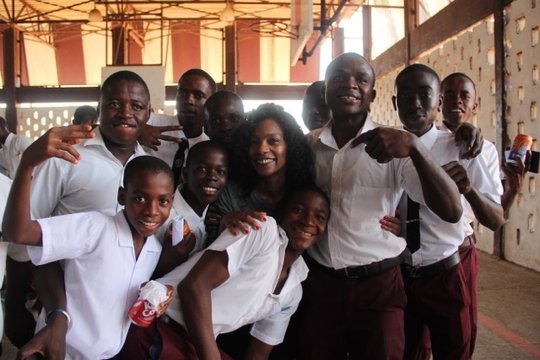 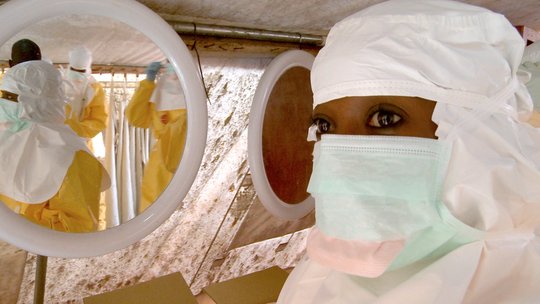 As part of our effort to support the West African community to #tackleebola, PCI Media Impact has launched the #ISurvivedEbola campaign. #ISurvivedEbola, is a groundbreaking West African multimedia campaign, has launched a new, interactive mobile app that allows Ebola survivors to connect with each other, share public health advice, and update the world on the challenges they still face during their post-recovery lives.

The updates from the app appear on the newly launched #ISurvivedEbola website, which also houses the stories of a growing community of Ebola survivors from Liberia, Sierra Leone, and Guinea.

In the first message sent via the mobile app, Camara “Fanta” Fantaoulen of Guinea shared, “Yes, I survived Ebola, thanks to the help of the brave healthcare workers who treated me. And I’ve learned that together, we can defeat this virus and protect our families and communities.”

After losing her father and five other family members to suspected or confirmed Ebola, Fanta believed her death was imminent when she tested positive for the virus. Thanks to a combination of early treatment, strict adherence to her treatment plan, and sheer determination, Fanta recovered from the virus and is now providing psychosocial support to Ebola patients.

The mobile app is just one, small component of the #ISurvivedEbola campaign, which leverages survivor stories from Liberia, Sierra Leone, and Guinea to deliver vital public health information about Ebola to affected populations, and to reduce the stigma faced by Ebola survivors. A key way in which the campaign does this is by documenting survivor stories in video, audio, and print formats; then disseminating these stories broadly via local, national, and international media, online platforms, and other distribution channels. Educational radio dramas that tell fictional yet reality-based stories about how to survive Ebola, and radio call-in shows that feature discussions with Ebola survivors and health experts, are foundational campaign activities.

Created and managed by PCI Media Impact in collaboration with UNICEF, this innovative program debuted in Guinea on January 5. Funded by contributions from Global Giving and a major grant from Paul G. Allen’s Vulcan Productions in response to the Ebola

The latest Liberia video introduces the world to Decontee Davis, a 23-year-old who overcame Ebola but lost her fiancé to the virus. Decontee now works in an Interim Care Center for children who have come in contact with Ebola patients and are under 21 days of observation. Many of these children have lost one or both parents to the disease. In the new Sierra Leone video, audiences meet Aminata Kargbo, a university student who, after surviving Ebola, has arisen as a leader in efforts to educate her fellow countrymen and women on the benefits of early treatment.

View the two new videos here: Mother of Many: Ebola Survivor Decontee’s Mission to Help Children Touched by the Outbreak, and The Power of Early Treatment: Aminata’s Story of Ebola Survival and How She is Using it to Help Others

“The campaign is really accelerating, especially in the three countries hardest hit by the Ebola outbreak,” said Sean Southey, CEO of PCI Media Impact. “We began in early December with the launch of the campaign and release of the first survivor video out of Liberia. Then, the campaign launched educational Ebola-focused radio programs in Liberia and released the premier survivor story out of Sierra Leone. Now, we have activated the mobile app, released the first survivor story out of Guinea, and launched a website that will allow concerned citizens throughout the world to join the movement.”