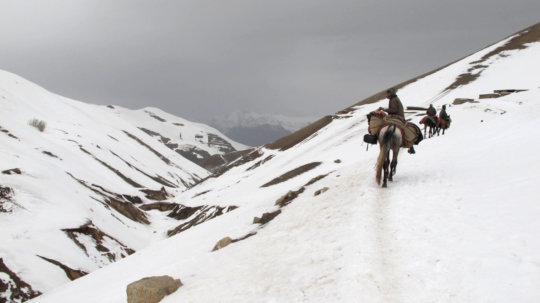 Below is an update from Concern’s Afghanistan’s Country Director. While he wrote this a few weeks after the earthquake, we thought you’d be interested in his initial reaction to the tragedy. He paints a picture of how dire the situation was but also of the hope ahead.

The world has moved on, but on the ground in northern Afghanistan, we still feel sharply the impact of the October 26 earthquake, especially as the cold sinks in and families huddle together in tent shelters.

The earthquake epicenter was in the province of Badakhshan, where Concern works, and also hit our operational areas of Takhar Province. Because we were already there, we were able to respond extremely quickly, repositioning tents and non-food items (like soap and blankets) that were already in the country. We distributed 200 tents and over 300 non-food item kits. We’ve provided a carpet with each tent to make it warmer, and two blankets per family.

But the hard truth? It’s not enough. It is very, very cold in the north, even when you have shelter. This week it reached 37 degrees Fahrenheit where I live in Taloqan, the capital of Takhar Province.

To protect against the region’s severe winters, the walls of traditional houses are about 1.5 feet thick. Imagine sleeping in a tent, which has walls only a fraction of an inch thick. We who live in houses have our bukharis(wood/sawdust-burning stoves), and it is cold even for us. In some places it has already started snowing. It is miserable.

UNOCHA (United Nations Office for the Coordination of Humanitarian Affairs) has estimated that more than 6,000 homes were fully destroyed in the earthquake, and some 129,000 people are in need of humanitarian assistance.

To help those in need, we must take two critical steps. All the houses that were fully destroyed cannot be reconstructed before winter, so we need to give immediate cash grants to allow families to move out of tents and rent someplace through the cold season. We at Concern need to provide for perhaps 250 families through a program like this.

Then we need to provide training sessions to local families before they rebuild. Our Concern engineer explained to me that in our program areas in Yawan, Badakhshan, we had trained communities on simple construction techniques to make houses earthquake-resistant. The improvements were made by placing a couple of wooden braces in each of the corners (every three feet or so) and by supporting the roof with a wooden plate — a long timber that is laid perpendicular to the roof beams.

Engineer Wais pointed out that one of the damaged houses could have withstood the earthquake if only every second timber used for the roof and for lining the wall had been removed so that the other timber could rest on them.

I was shocked to learn that such simple techniques could have such an impact. If these techniques had been employed earlier, perhaps we would not have lost a single home. And it would have cost them no more than using the same amount of timber slightly differently.

On the way back from the village, I sat in disbelief that so much of that destruction was absolutely avoidable if only some simple and inexpensive techniques had been incorporated into house construction.

I started looking at houses with a different perspective. “Look, they have used a wooden plate!” “Look I see that house has used braces!” ”I see the cracks because there is no wooden brace to arrest the crack….” I am no builder, but Engineer Wais’ 10-minute demonstration had brought about such a change in the way I viewed these houses!

I urged Engineer Wais to put together a simple template, with lots of pictures and simple explanations in Dari and Pashto, which he has already started. I said once he completes it, he should send it to a few engineers from other NGOs to ensure wider agreement on the design.

If we can get funding, I want us to print 10,000-20,000 copies of this booklet and offer it to other NGOs. I also would like us to spread out to villages where we can hold short trainings and demonstrations, so that all skilled workers learn these simple techniques and can rebuild with these concepts in mind.

I have my heart and my soul in this work. We need to help the earthquake victims live in dignity through the winter, until they can rebuild. If we do not recognize that we are all human, what is this work, at the end of the day? 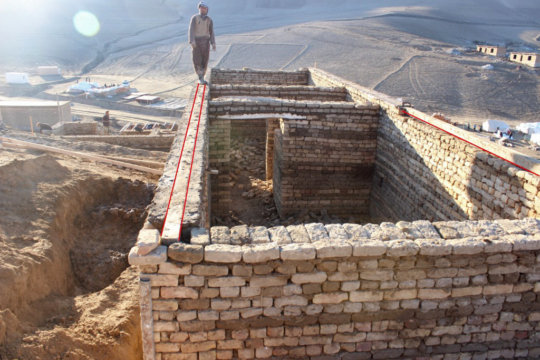 Traditional house with a wooden plate in place
Dec 18, 2015 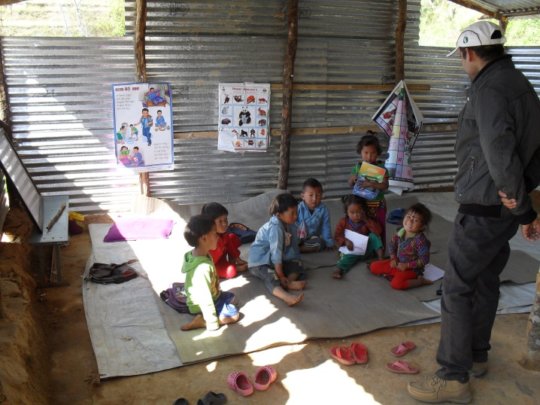 As we start to wind down our work for the year, I am writing to thank you for your tremendous support which is making a real, tangible and lasting difference for so many families in Nepal. Here’s an update on our progress in Dhading- all work that wouldn't be possible without your support.

Dhading district, with a population of 340,000, was one of the 14 worst affected districts in Nepal. According to a report by UNICEF completed immediately after the earthquakes, up to 70% of the schools in the district were damaged, affecting 70,000 school children. About 50% of schools were completely destroyed.

To date, 294 Temporary Learning Centers (TLCs) have been established by various organizations for the schools in Dhading. Classes are being held in these TLCs which are made from timber or bamboo with corrugated steel roofing. The TLCs have addressed the immediate needs of the schools by providing shelter from the monsoon rains, which occurred in August and September, in a non-earthquake damaged facility. Unfortunately the type of construction used for these TLCs means that they are badly insulated, providing little warmth in winter which lasts until about February 2016. Schools were thus requesting for permanent classrooms to be built in order to address this problem and most importantly that these classrooms are earthquake resistant.

Concern Worldwide, with your help, has committed to providing transitional shelter support to 10 schools in Dhading district reaching 3129 students and 112 teachers. Over September and November, two field visits were conducted by our technical team and by our partner NEWAH to the selected schools to assess the damage and identify the appropriate shelter activity (ie building new classrooms, demolishing and rebuilding floors, strengthening existing buildings).

Our findings from the assessment were as follows. Earthquake damage to the buildings has varied significantly between schools. Schools with newer buildings made from reinforced concrete frames have fared very well. The older stone masonry buildings with mud mortar are more damaged and a number have collapsed. On close assessment of these buildings, there are a number which have only minor cracking in the walls. As an alternative to building entirely new classrooms we have proposed to repair and strengthen some of these existing buildings. The strengthening work in some cases is cheaper than constructing entirely new buildings and the number of useable classrooms is greater in the long run.

In relation to classroom construction, our partner NEWAH has put forward several designs for new school classrooms using different materials including pre-fabricated polystyrene walls attached to steel framing. Designs are currently being reviewed and finalized. Designs have been made in coordination with input from the District and Village level. On Wednesday, October 4, 2015 members from both Concern and NEWAH met with the Dhading District Education Officer (DEO) to discuss the proposed school projects. The DEO had no objections to our proposed construction projects and will provide the necessary approval when finalized plans are produced. Construction will be earthquake resistant and of high quality.

Looking ahead, we have a very busy next couple of months with construction anticipated to start in February 2016. We look forward to reporting back to you on further progress soon! In the meantime, a very sincere thank you for all the work you've made possible thus far from emergency kit distributions to construction and assesment work. We wish you a wonderful holiday break with family and loved ones!

PS- Here is just one example, from ShreeThala Primary School, one of the schools we are supporting, to give you an idea of the type of needs these schools have.

Shree Thala Primary School is located in Simjung, Dhading, Nepal. There are around 70 children that attend this school between the ages of four and ten. One motivation for coming to school is that they get a free lunch. The school cooks lunch every day for all the students.

Following the earthquakes two temporary learning centres made from bamboo and corrugated steel sheets were constructed for the school. Now all classes are held in these rooms. There is no flooring in these rooms so the children sit on a foam mat laid over the dirt.

The school continues to use the old stone buildings for the kitchen, library and staffrooms, despite being given a red sticker as there are not enough temporary rooms. The teachers are afraid that these old buildings will fall down in another earthquake but they do not have any other options. Their priority is to keep the children safe in the temporary classrooms. 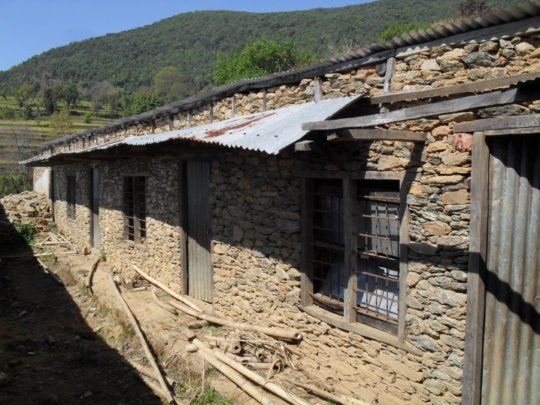 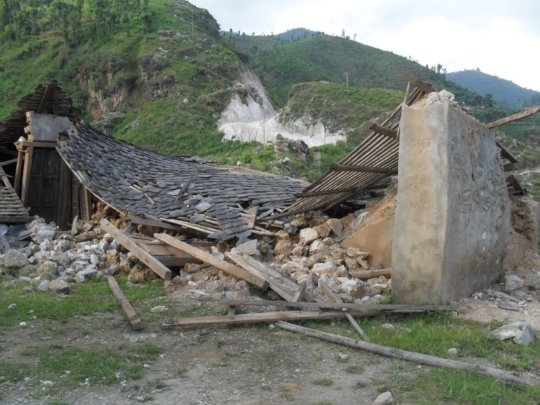 An update from Dominic MacSorley 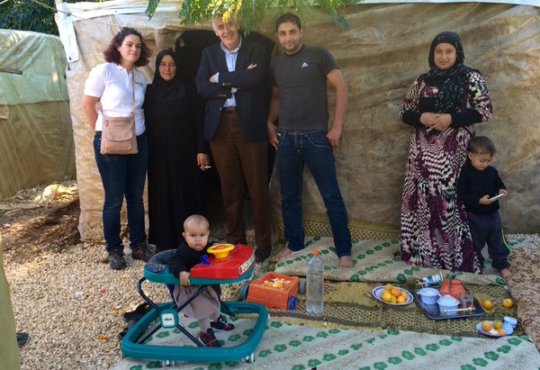 I've just received a note from our videographer, Kieran McConville, and Concern Worldwide's CEO Dominic MacSorley. They were both just in Lebanon and have shared with us an update on the enormity of the Syrian refugee crisis. Here's a message from Dominic and a video from Kieran. Again, we thank you for your ongoing support- without you our work would not be possible!

I am sending you a short video from my recent visit to Lebanon. It was an excellent but sobering visit.  The bomb blasts in Beirut, followed by the tragedy in Paris were a horrific reminder of the instability that this crisis has brought to the region and beyond.

A few key messages from our visit: 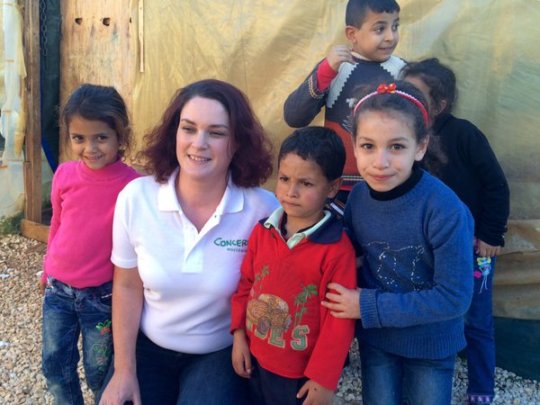 ‹ 1 ... 13 14 15 16 17 18 19 20 21 ›
WARNING: Javascript is currently disabled or is not available in your browser. GlobalGiving makes extensive use of Javascript and will not function properly with Javascript disabled. Please enable Javascript and refresh this page.