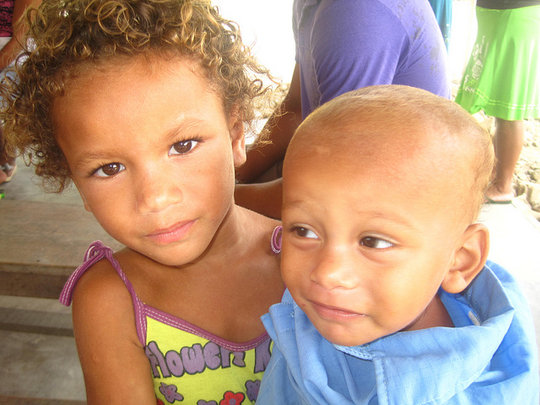 A good reason to help the Xingu people.

We won’t give up.

This is AIDA’s motto for defending the rights of local Brazilians who face forced relocation as construction of the Belo Monte mega-dam moves forward in the Amazon.

The Brazilian government is building the world’s third-largest dam on the Xingu River under the guise of meeting a growing demand for energy. One of the costs, according to official estimates, is the displacement of at least 20,000 people from indigenous and river communities. Their traditional lands will be flooded and their ways of life destroyed.

But the people of the Xingu won’t be drowned quietly. They have organized to stand up for their rights.

The government is so determined that it has hired spies to infiltrate the opposition movement. It has deployed public security forces to patrol the construction site and break up protests. And it plans to beef up controls in June and July, when global attention will focus on Brazil for the World Cup.

Now Brazil’s government wants to criminalize protests against infrastructure projects, even if the affected communities are only voicing their dismay that they’ve been denied a basic constitutional and internationally recognized right to have a say in what happens.

Throw in the towel?

Not us. With your donations, AIDA is working to ensure that the people of the Xingu will be assured the right to be heard, to be consulted, and to live in a healthy environment.

One focus of AIDA’s strategy is to tackle a legal instrument called Suspension of Security, which Brazil established during a military dictatorship. Higher courts have used it several times to “protect the public interest” by overruling lower courts, which, in the case of Belo Monte, have halted dam construction until the government consults and provides adequate protection and compensation for affected communities.

AIDA provides all of its work free of charge to the people we help. Your donations through Global Giving provide the critical support that allows AIDA’s attorneys to pursue this challenging and important legal work, which empowers Amazon communities to defend their rights.

Please consider making another gift in support of this work, helping in our “never-say-never” fight against Belo Monte. 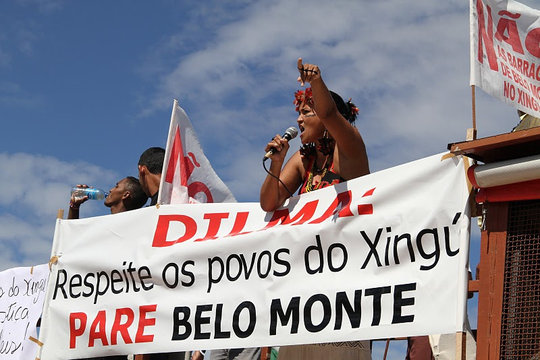 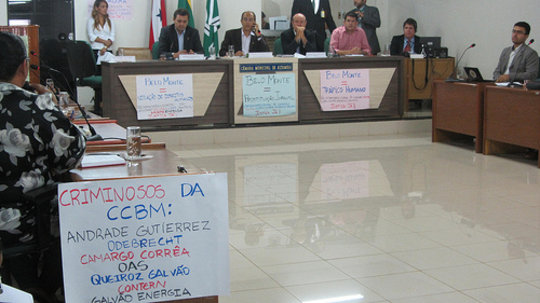 Signs of protest at a city meeting on Belo Monte. 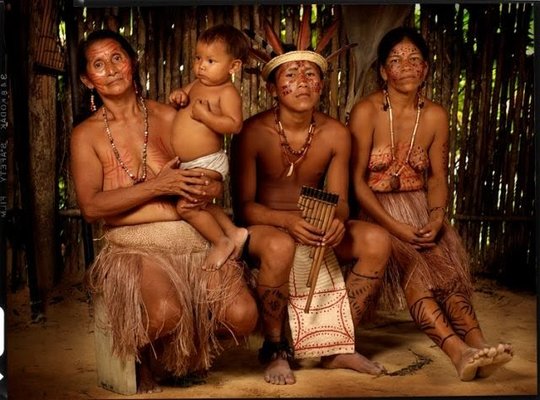 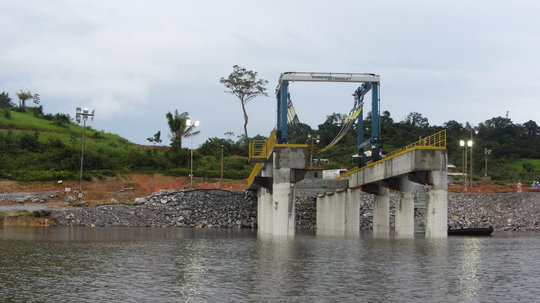 Vanished Villages, Dirty Water and Poor Healthcare: Tales of Destruction in the Amazon 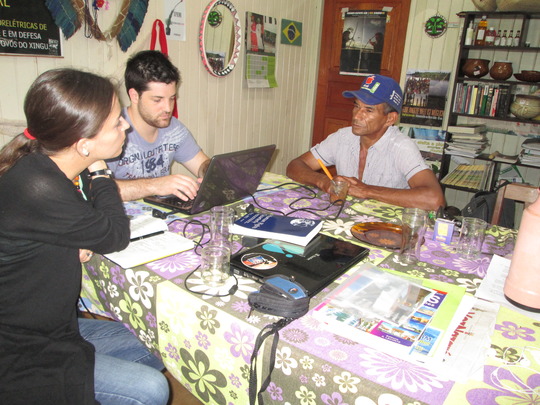 Deep in the Brazilian Amazon, Élio winces as he lifts yet another 50-kilo bag of cement. The back pain is severe as he works construction in Altamira, a sprawling city seemingly a long way from his home on the banks of the Xingu River where, for years, he made a living as a fisherman.

But he can’t go home anymore. “There’s nothing left of the community,” he said.

Élio is one of 20,000 officially counted indigenous and riverine people (independent estimates double this number) who are being forced off their traditional lands to make way for the Belo Monte mega-dam. The government says it’s necessary to supply power to a growing nation, despite evidence of more energy efficient alternatives. And the authorities are pushing forward even though the affected communities have been denied a basic constitutional and internationally recognized right to have a say in what happens on their lands.

With your support, AIDA has been advocating for them in Brazilian government and international forums. Just last week two of AIDA’s attorneys were on site to interview displaced people, assess damage to their communities and lands, and to chronicle these impacts in writing, in photos and on video.

What our team experienced was disheartening. “Of my trips to visit the Xingu communities, this has been one of the most difficult,” said attorney María José Veramendi. “The damage is enormous and the situation is rapidly worsening. People have been pushed to the brink - their lands, their livelihoods, their culture, their communities have been taken away. It is truly an atrocity.”

Confused and crying, Élio told AIDA’s attorneys that the 60 families in his Santo Antônio community have been relocated. He’s lost touch with family members and life-long friends, leaving him feeling alone, uprooted and isolated. He now lives in a borrowed room in the middle of the vast city of Altamira. He can’t even visit his ancestors as Norte Energia S.A., the company building the dam, has taken the community cemetery property.

Another interviewee, José Alexandre, said he now must rely on getting his sustenance from his sons, who have become farmers. He can no longer fish and hunt as his Arroz Cru riverside community has done for generations. Not that there is much to catch anymore. He and the Juruna indigenous people say the bright lights and dynamite blasts from the Belo Monte construction site are frightening away the animals and fish they have traditionally relied on for food. As a replacement, the construction company is supplying crops, but some of them are not even fit to plant on their lands.

While AIDA’s attorneys learned that Norte Energia has built wells in some indigenous communities, a nurse at the Juruna community health center said the water is not drinkable. Chlorine must be added. And the state is failing to provide even basic medicine and emergency services for the communities. The health centers provided by the state for indigenous peoples in Altamira are so filthy that “you come out sicker than when you got there,” an indigenous woman told them. She and many others now must pay dearly for private doctors.

Your donations via Global Giving have supported the work of AIDA’s attorneys to integrate this first-hand evidence of human rights abuses into on-going testimony and legal arguments delivered to Brazilian authorities and the Inter-American Commission on Human Rights (IACHR).

In this season of giving, please consider a year-end gift to help us reclaim the rights of those who have had so much taken away.

And, please, share this with a friend. All new donor gifts to AIDA will be matched through a challenge grant from the U.S.-based Swift Foundation, doubling your gift!

With great appreciation and best wishes for a wonderful holiday, 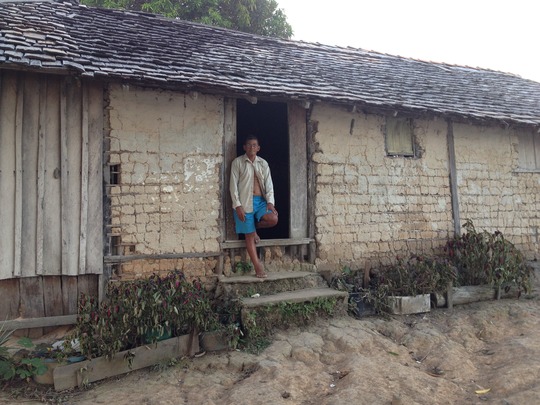 With Belo Monte, Jose must find a new way of life. 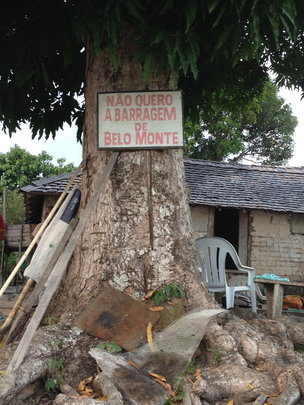 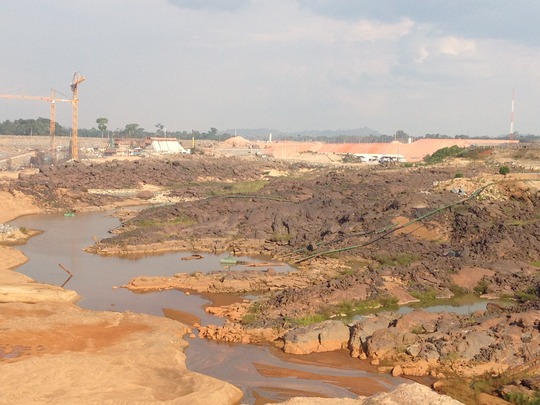 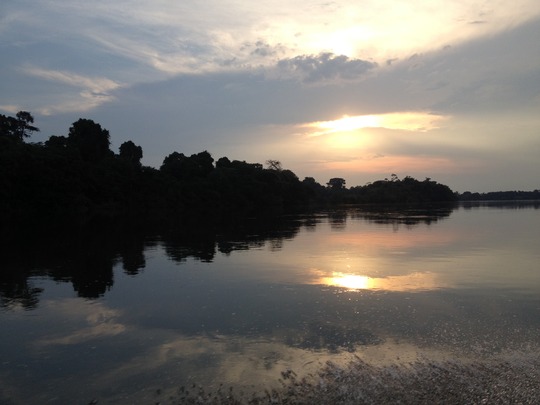 The sun sets over the Xingu River in the Amazon. 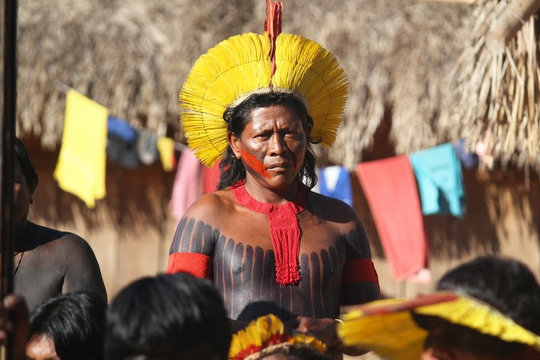 An indigenous man at a Belo Monte protest

Far in the north of Brazil, indigenous communities peacefully occupied the construction site of the massive Belo Monte hydropower dam twice in May and June.

The government responded by calling in the military to remove them.

This reaction is a sign of the extreme tension surrounding construction of the world’s third-largest dam. Brazilian President Dilma Rousseff is promoting the project as progress, saying that it will help develop the Amazon and expand the economy. So determined is her administration to build Belo Monte and another 100 or more dams in the Amazon that she has deployed the military to defend builders and the teams carrying out environmental impact studies.

Now the military has orders to disband any protests and assure continued construction of the dams.

AIDA is working with the communities affected by this steamrolling. We are helping them to develop legal strategies to defend their rights to their homeland and their lives.

Thanks to your contributions, we have hired an attorney to work exclusively on the Belo Monte case before the Inter-American Commission on Human Rights (IACHR), which provides a mechanism and critical tools for defending human rights in the Western Hemisphere and investigates complaints of any such abuses. AIDA regularly updates the IACHR on the situation of the communities.

The communities – indigenous and non-indigenous – want to have a say in what happens on their native lands, exercising a basic constitutional right. The multi-billion dollar dam will divert almost all of the water flow on a section of the Xingu River, destroying fishing grounds and depriving entire communities of water for agriculture. This will cost them food, jobs and access to a river that is vital for travel and trade. At least 20,000 people will be displaced from their homes.

Will the government listen to the communities?

That is not certain. As the military moved in on the protestors a few months ago, the Rousseff administration attempted to placate them by flying 150 indigenous leaders to Brasilia for talks. The protestors met with Presidential Secretary General Gilberto Carvalho in the capital. But they were turned away from the other meetings they requested, and they were prevented from delivering a letter to Rousseff.

AIDA responded by informing several United Nations Special Rapporteurs of the government’s intentions to violently break up the protests. We also warned these independent experts that the government could commit other human rights abuses against indigenous peoples as they continue to express their opposition to the construction of Belo Monte.

Additionally, AIDA issued an open letter demanding that Brazilian authorities investigate the case of espionage on the protest movement that we reported on in our last project report. We are insisting that the government protect the safety of the movement’s members and their right to freedom of assembly.

We greatly appreciate your support in helping to fight this atrocity in the Amazon. You can also help by sharing this report and our work with others, and by continuing to donate to this critical cause.

The Amazon communities need all the help they can get.

‹ 1 ... 21 22 23 24 25 26 27 28 29 ›
WARNING: Javascript is currently disabled or is not available in your browser. GlobalGiving makes extensive use of Javascript and will not function properly with Javascript disabled. Please enable Javascript and refresh this page.