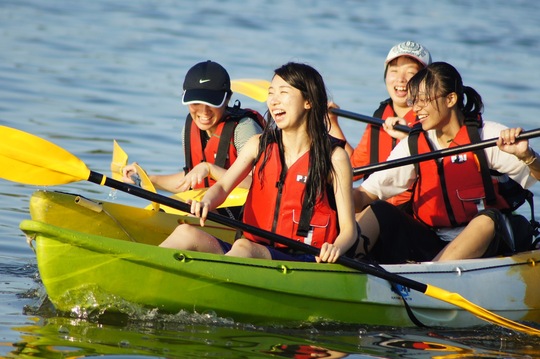 Last month, we held three camps for children living in Fukushima. The first one was held from August 5 to 11, 2013, in Taiwan, with help from YMCA Yokohama and YMCA Taipei. 18 junior-high and high school students from Fukushima participated in the camp.

This camp was a joint camp between participants from Fukushima and Taiwan. The themes of the camp included learnig each other's language and culture, and thinking together about disaster prevention, mitigation and society after disasters. It turned out to be an occasion for those children to see themselves as next-generation leaders in each region, through talking with neighboring friends who share the same kinds of hazards: earthquakes, tsunamis, typhoons and nuclear crises.

We visited Raohe Street Night Market, Taipei Office of Interchange Association, Japan (equivalent to the embassy of Japan in Taiwan in a practical sense), YMCA Taipei, Fulong Beach, Central Emergency Operation Center at National Fire Agency, Ministry of the Interior, Taiwan, and NEC Taiwan (developing an emergency operation cloud system for Taiwan). We conducted Taipei Digital Orienteering in which children themselves decided what their checkpoints and hurdles were.

Thoughout this camp, we were helped by the hospitality of Taiwanese people, including camp participants from Taiwan, staff members at YMCA Taipei, members of Taipei Nanzan Rotary Club, and kind people we met in the City of Taipei through Taipei Digital Orienteering.

One of the participants from Fukushima wrote in an essay afterwards that he learnt the strength of smiles through the camp, as people he met in Taiwan always welcomed him with smiles, and he will make more people smile in order to start changing the world.

Although this camp in Taiwan has been funded mostly from sources other than GlobalGiving, additional funds from GlobalGiving donors will be much appreciated. Everyone involved in the camp says "Let's do this again." Please help us keep going! We would appreciate your continuing support. 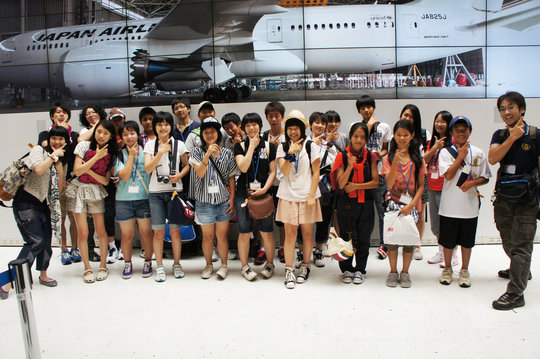 At Narita Airport, on the way to Taiwan 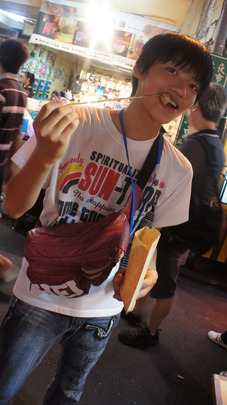 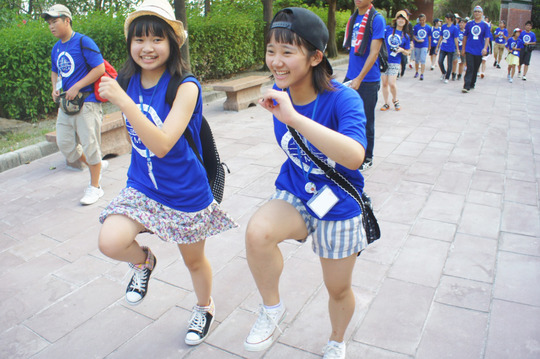 Hiking near the Fulong Beach 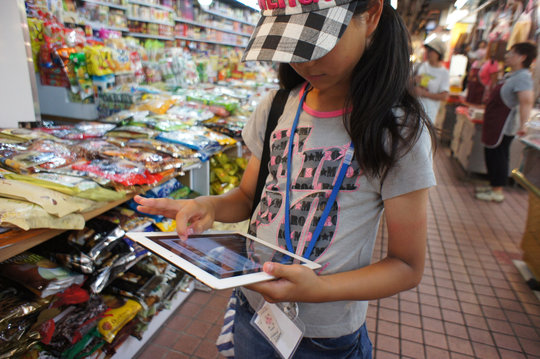 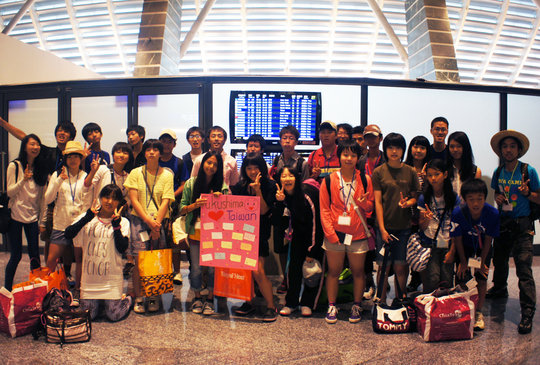 At Taoyuan Airport, on the way back to Japan

Getting ready for Academy Camp 2013 Summer! 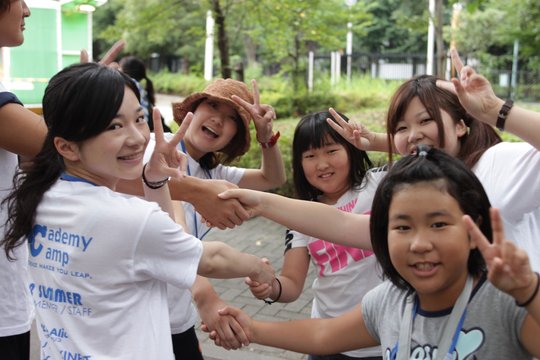 From Academy Camp 2012 Summer in Tokyo

Thank you once again for your having supported us at GlobalGiving April 2013 Global Open Challenge. We raised $9,142 during the period, and just recently, we received 874,682 yen in our bank account through the disbursement process. With that and generosity of a couple who would like to remain anonymous, as well as funding from Kanagawa Children's Future Fund, we have successfully secured budgets for two camps for this summer.

Academy Camp 2013 Summer Term 1 will be held in Tokyo during August 12 - 16. We will be staying at National Olympics Memorial Youth Center, where we held Academy Camp 2012 Summer Term 1 last year. We expect about 35 children from Fukushima. Participants will be called for later this month.

Academy Camp 2013 Summer Term 2 will be held in Yokohama during August 17 - 21. We will be staying at Yokohama Youth Outdoor Activity Center at Mitsuzawa Park, where we held Academy Camp 2013 Winter in February, for the first half, and at Yokohama Youth Training Center at Nojima Park for the second half of this camp. We expect about 45 children from Fukushima. Participants will be called for later this month.

Hopefully, there will be more in this summer. Since we have been holding three camps in August for the past two years, we are aiming at holding another one, a special camp, in the first week of August. We will begin our fundraising campaign for that shortly. In September, we will probably be able to hold the first of a series of short camps with a specific theme of medicine. The camp is dubbed "Aca-medical Camp". The Aca-medical Camp series is partially funded by JST (Japan Science and Technology Agency) for promoting science and technology communication.

We are planning these camps because we would like children in Fukushima to have the diversity of experiences they deserve. For that, we need your continuing support.

We would like to let you know that GlobalGiving is having the June bonus day on the 12th. It's called "Partner Rewards Bonus Day", and matching will depend on the organizations' "partner rewards" levels. Academy Camp is at "Partner" level (instead of "Leader" or "Superstar"), and we will get 30% matching for donations up to $1,000 each. There is $90,000 available in matching funds, and GlobalGiving is offering a $1,000 bonus award for the project with most individual donors and another for the most money raised.

Matching begins at 9:00am EDT and lasts until funds run out or 11:59pm EDT of Wednesday, June 12. (Wed. 22:00 June 12 - Thu. 12:59 June 13 in Japan.) This is a perfect timing for anyone to support children in Fukushima, if they have been concerned, but did not know what to do. We would really appreciate if you could spread the word! 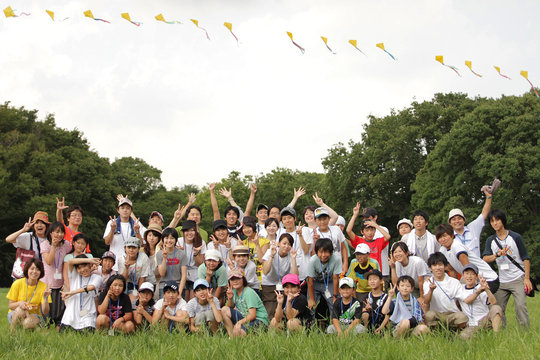 From Academy Camp 2012 Summer in Tokyo 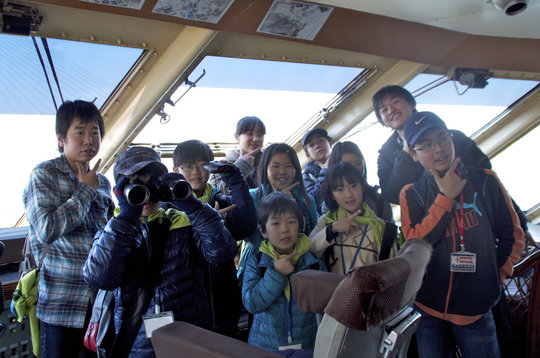 From Academy Camp 2013 Winter in Yokohama 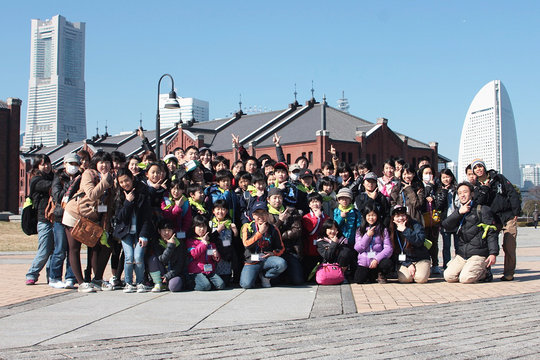 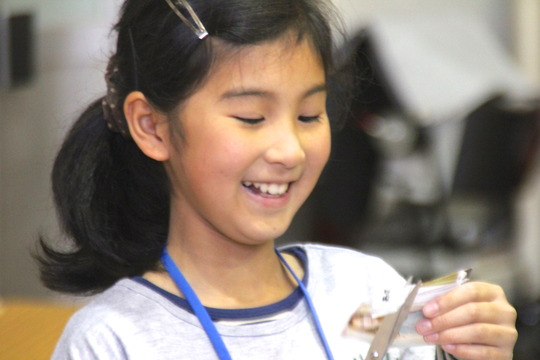 A girl is cutting out a character for an apparatus

We have just held our first 2-day camp in Fukushima that we hope to hold at least bimonthly. We went to Inawashiro, a town in the middle-west of Fukushima prefecture, where the radiation level is much lower than the middle and east parts of the prefecture. We stayed during April 20 to 21, 2013, in National Bandai Youth Interchange House with 46 elementary and junior-high school students living in Fukushima. As always, we were blessed with a plenty of smiles of the children. We were surprised by an unusual heavy snow in April, but all went well.

Unlike our summer and winter camps which would usually last 5 to 6 days and have enough time slots for a variety of experiences, this time we focused on a single theme: making Rube Goldberg machines, or apparatuses that perform a very simple task in a very complex fashion, better known to Japanese children as "Pythagora apparatus" featured in a popular educational TV program. We invited a former assistant and a graduate of Tama Art University, who have experienced making such apparatuses in a class as a lecturer and a student, respectively, to help us. We started with looking at things we see daily from a different angle, focusing on their shapes rather than intended functions, so that they can be used in the design of apparatuses that work with chain reactions.

In the end, we had 11 of such apparatuses, made by 9 teams of children and 2 teams of adults, but of course, none of them worked perfectly at the final demonstrations (following the law of universe ;-)). On closing, it was mentioned that only those who ever tried to make a Pythagora apparatus can experience the failure of the apparatus, so they should be proud of themselves. It was another learning experience for all.

Wednesday, April 24, 2013 EDT (starts 13:00 in Japan) is the final bonus day for the April 2013 Global Open Challenge at GlobalGiving, on which donations of $25 or more will be matched at 15% (there is a maximum of $1,000 per donor). There is $3,000 in matching funds, and once that is used, no more donations will be matched. If we have the most unique donors on Bonus Day, we will earn an additional $1,000. This is a great chance for people to support children in Fukushima, if they have been concerned, but did not know what to do. So please share this opportunity with your family, friends and known communities. We would really appreciate it. 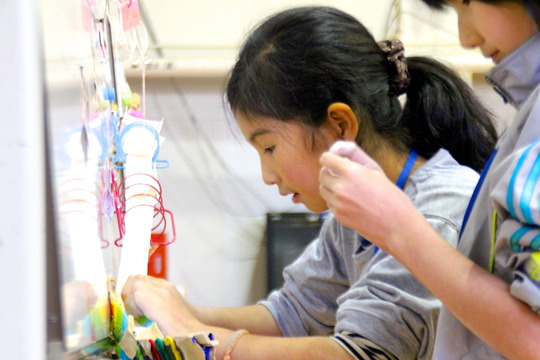 Their apparatus uses a whiteboard as a wall 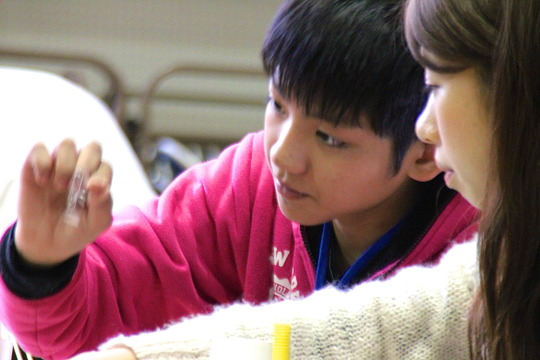 A boy is working together with a volunteer student 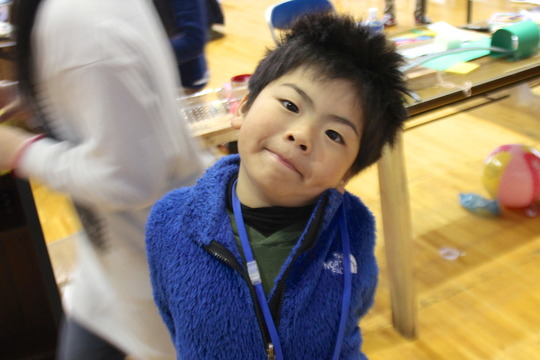 The youngest participant this time 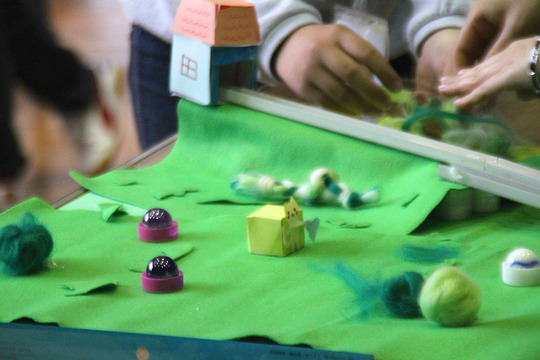 A girls-only team made an artistic apparatus 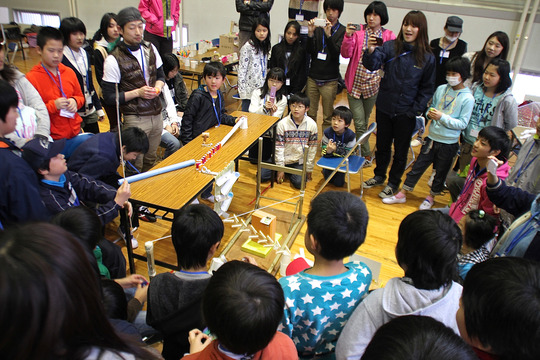 A demo of an apparatus in front of everyone