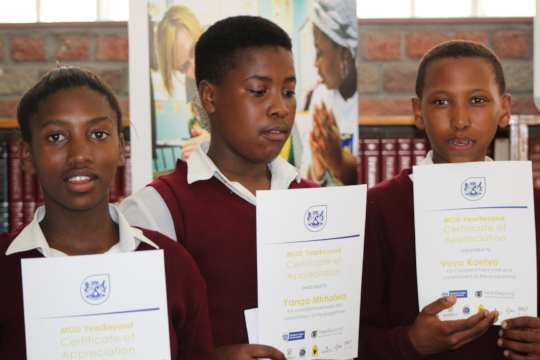 Learners with their certificates

Honouring our learners is central to our work. It is important that we celebrate their efforts and achievements so that they know that they are seen and valued and therefore encouraged to continue working hard towards realising their dreams.

On Friday, 10th November 2017, one of our partners, Year Beyond, hosted their annual prizegiving at their Gugulethu Branch in Cape Town. Year Beyond, or YeBo, is a partnership between the Western Cape Government and numerous NGOs (including IkamvaYouth) aimed at improving educational outcomes and encouraging a culture of volunteerism. Using the IkamvaYouth model, YeBO is currently working with 184 grade 8 & 9 learners enrolled across three different branches in Cape Town.

The event programme started with a welcome by the Year Beyond School Coordinator, followed by entertainment from a talented group of learners who performed a dance piece. The learners then received awards in the following categories: Appreciation, Academic Achievement, and Achievement for their participation in Olico and Fudza study programmes.

In a thank you speech to the tutors, one of the grade 9 learners, shared a bit about her experience saying that, “The main thing I loved is that I got to be able to learn a lot of things and add to the knowledge I had.” She added, “May this programme expand to many schools. Our future is bright because of you.”

To say this was a fun and inspiring event would be an understatement. It was also illuminating in that it gave us a glance into the impact that our work has on the lives of the learners. The qualitative kind that can only be expressed through the visible courage and determination of our learners to succeed.

Thank you to each and every one of our donors who continue to support our work - your contribution to IkamvaYouth is unparalleled! 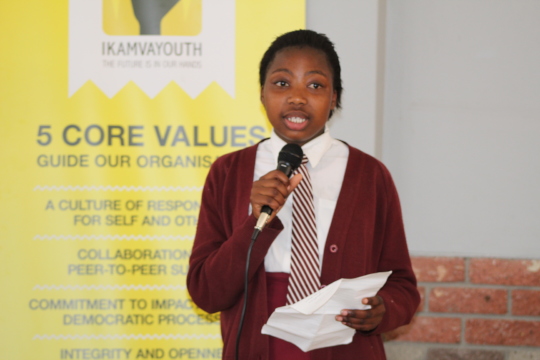 One of the learners giving her Thank you speech 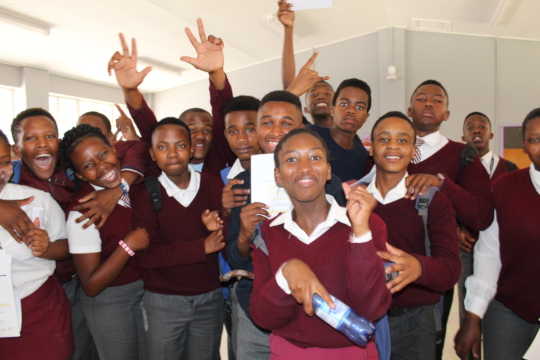 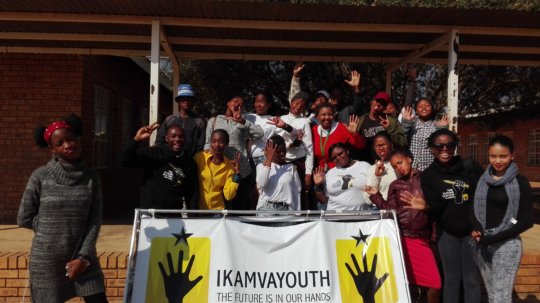 This year was no different- with averages of over 80% attendance, learners enrolled in 16 of our IkamvaYouth branches came out in scores. Our 2017 Winter School program ran from July 3 - 14. Speaking to learners who attended this year’s Winter School, it appears that much of the success of the programme stems from the positive tutor experiences they encountered.

An essential component of IkamvaYouth’s Winter School is covering academic content. Tutors helped the learners in answering questions they found most difficult in their various subjects.

Boitumelo,  Grade 10 learner from the Mahikeng branch said she particularly enjoys the interaction with the tutors and knowledge sharing with her peers from other schools, during Winter school. “My teacher at school usually shouts and screams, but when I come here I know that the tutors will help me. Winter school has helped me with revision and especially things that I did not fully understand during the last term. It also helps a lot to have learners from other schools because we share the different topics covered at our [respective] schools.”

Thapelo, Grade 11 learner from Mahikeng  finds the Winter School programme to be very beneficial to his studies. “The tutoring has been really helpful especially in Maths and Physical Sciences. The tutors encourage us to ask questions.” He said he intended to pursue a career in either Analytical Chemistry or Chemical Engineering.

Samukelisiwe,  Grade 12  learner from the Umlazi IkamvaYouth branch has the following impression of the programme:  “Winter School had a huge impact on my academic life, through it I was able to tackle some of the questions that were challenging me the most. It gave me time to focus on all my subjects. With the help from tutors I was able to learn more and grow academically. I am grateful even for the career guidance which opened my eyes to all opportunities out there waiting for me as a matriculant. IkamvaYouth ROCKS!”

Albert, 27, one of Mahikeng branch’s committed tutors said that the programme was not only valuable for the learners but equally fulfilling for himself as a tutor. Albert, who has been tutoring at the Mahikeng branch since 2015, is an Information Technology (IT) graduate. Although he completed a degree in 2013, challenged with a physical disability he has not been able to find employment in the Mahikeng and surrounding areas, where he would love to be based. Despite his immediate challenges, which  could have easily led him astray, he has not been deterred but instead found purpose in paying it forward to the learners from his community.

“The tutoring has given me so much experience, I know a lot of things now. You see with IT you often deal with just computers. Now with these kids you realise you have to adjust, to say you are not just working with printers but you are dealing with people.”

By his own admission many of his peers who have pursued careers in scientific fields, like IT often lack in social and interpersonal skill- something he has had to hone while tutoring at the branch.

“There some people who sit behind computers,  from computer to computer from morning till you knock off. You find that sometimes you hardly socialise. The moment you are with people you struggle to integrate and feel like you often lack in this.”

He said that because learners often struggle grasping concepts he has had to improvise and pull in communication skills he did not even know he had.

Albert has since the 1st of August found employment and has relocated to Johannesburg. We hope he will continue paying it forward at one of our Johannesburg based branches!

We would like to thank all our donors, who opened up their hearts and donated to our worthy cause and thus enabled to us to make a difference in the lives of over 2000 South African Youth through the IkamvaYouth branches! Your contribution made our Winter School programme a massive success- Thank you!

For any further information please visit our website: http://ikamvayouth.org/ 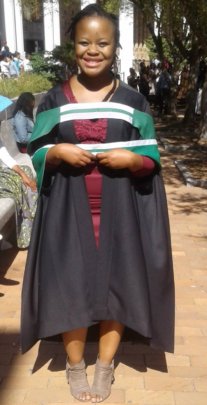 The months of April and May mark graduation season in the South African Higher Education calendar.  IkamvaYouth is proud to see many of our alumni graduating from their respective tertiary institutions and making their way up the path to ultimately earning a dignified living. As many Ikamvanites graduate and make their mark by paying-it-forward (returning to volunteer as a tutor) in their homes and communities, this is an indication that our model has a remarkable impact.

Siki was part of the inaugural class of the Masiphumelele branch in 2009, she said being part of the IkamvaYouth programme “helped me grow academically and personally. Academically; with all those afternoon classes we had, and also the winter school; where we got the opportunity to meet people in the business sector telling us what we need to get obtain in order to get to University and the skills we need to learn in order to get to the workplace. Personally; I was able to talk in front of people, so I got a lot of confidence from Ikamva. Also making long and lasting friends from the people that we interacted with within Ikamva in Masi and other branches.”

Her rise above adversity is a story of resilience that motivates other Ikamvanites and other South African learners who come from similar backgrounds as herself.  Having not done so well on her first attempt at completing her Grade 12 in 2011, she obtained a Diploma entry into college.  Since her grades were not good enough to allow her to enrol at a traditional university Siki opted to take a gap year and work as a debt collector instead.

“I told myself that my life belongs in the University so I rewrote some subjects and got my B [Bachelor pass, which allows one entry into any university] and today I am proud that I am one of the best in my class. What I have learnt is that you do not need to be rich to get to University, there are many ways in which the school can support you financially and academically. Working hard pays off, we all know that school is not the best sometimes but we need to stay consistent and work hard and the school will notice you. English does not determine your intelligence; you do not have to be the best English speaker for you to excel in University. Ask, consult if you do not know,  do not die in silence.”

From debt collector to making it to the dean’s list, Siki has gone on to fly the South African flag high overseas, when she received an opportunity to visit the United States as an exchange student during her studies. She has also received a Humphrey award for being the best consistent student in the Sociology/Anthropology department from first year till third year.

Next month, Siki will be in New Mexico presenting her Honours thesis.

Yearly the graduation season coincides with the release of the placement data for the previous year’s Matric cohort. IkamvaYouth is proud to report that we have managed to achieve an overall  placement rate of  87%:

These commendable stats come in spite of startling national percentage of 47% of youth between the ages 21 and 24 who were deemed NEET at the beginning of the last quarter of 2016.

IkamvaYouth would never be able to achieve all of these results, without the continued support from our volunteers and donors. Thank you so much! 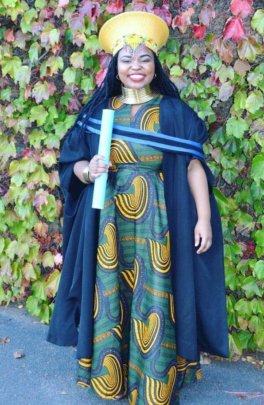 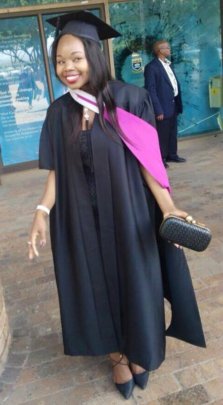 Olga (Makhaza): BCom (Information Systems), UWC
‹ 1 2 3 4 5 6 7 8 9 ... 11 ›
WARNING: Javascript is currently disabled or is not available in your browser. GlobalGiving makes extensive use of Javascript and will not function properly with Javascript disabled. Please enable Javascript and refresh this page.