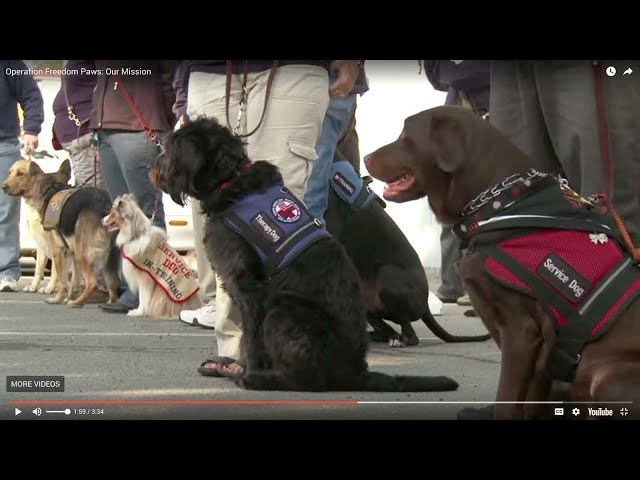 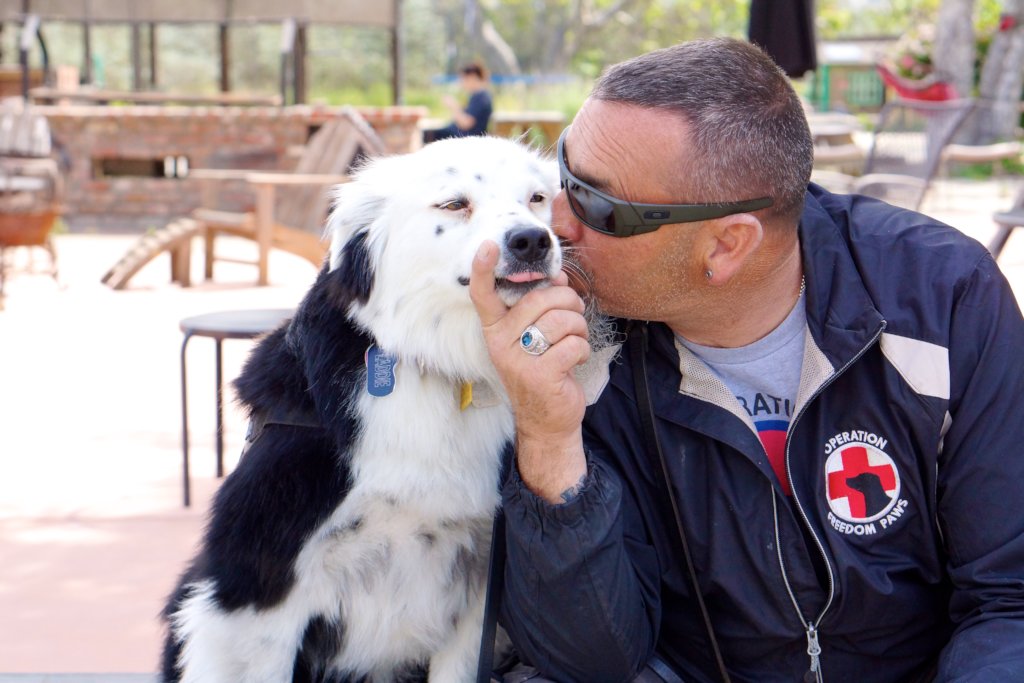 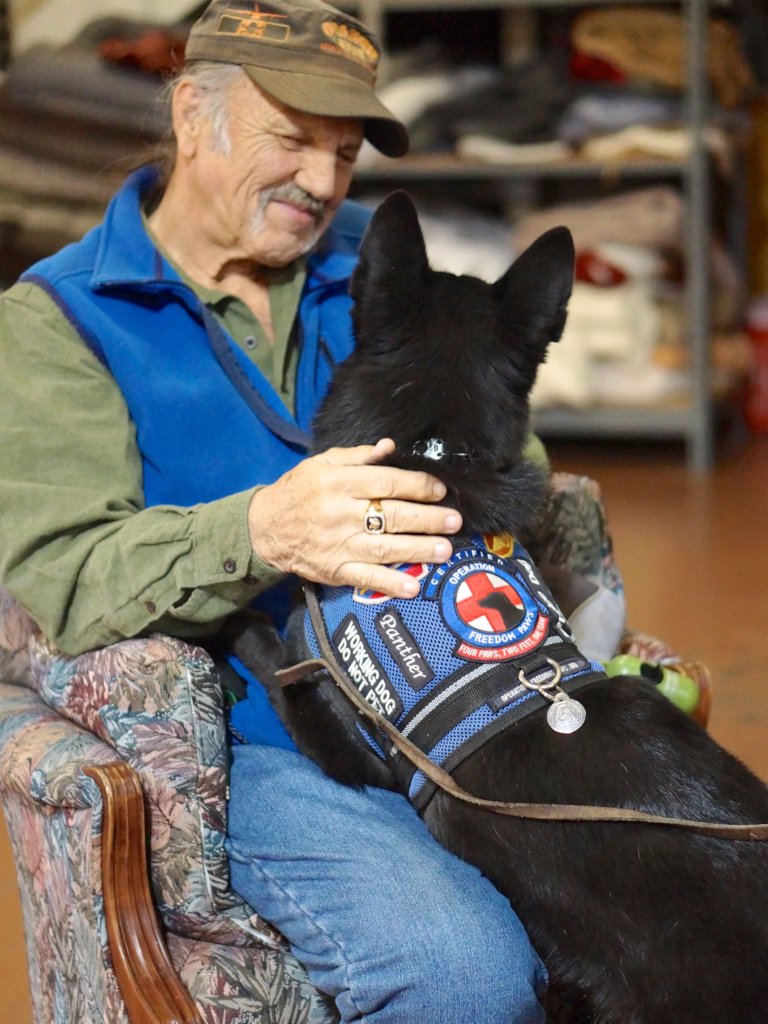 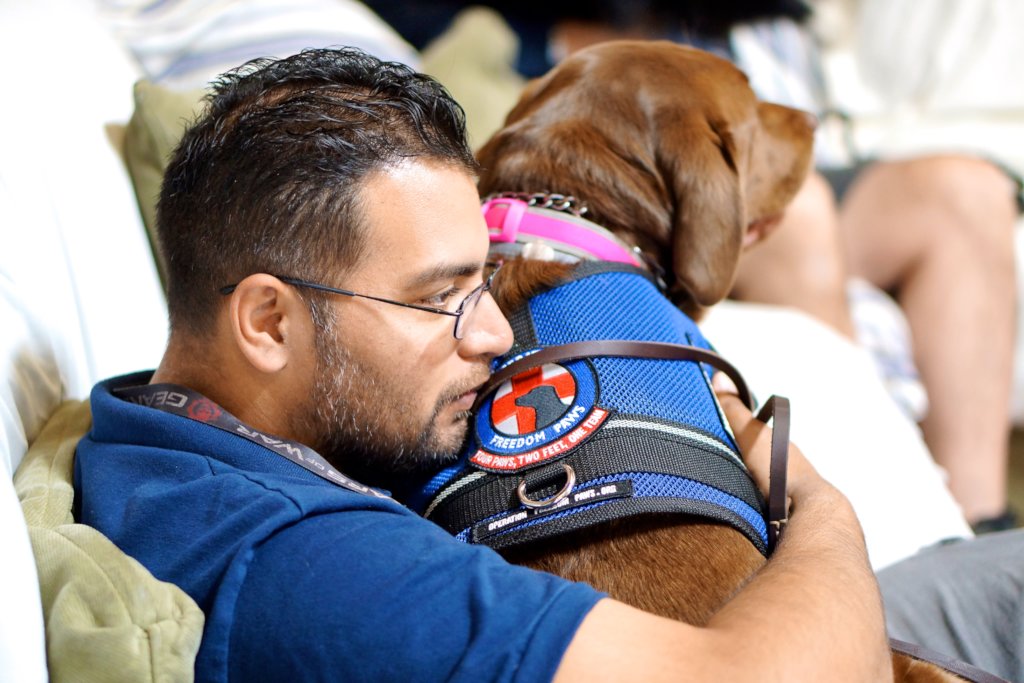 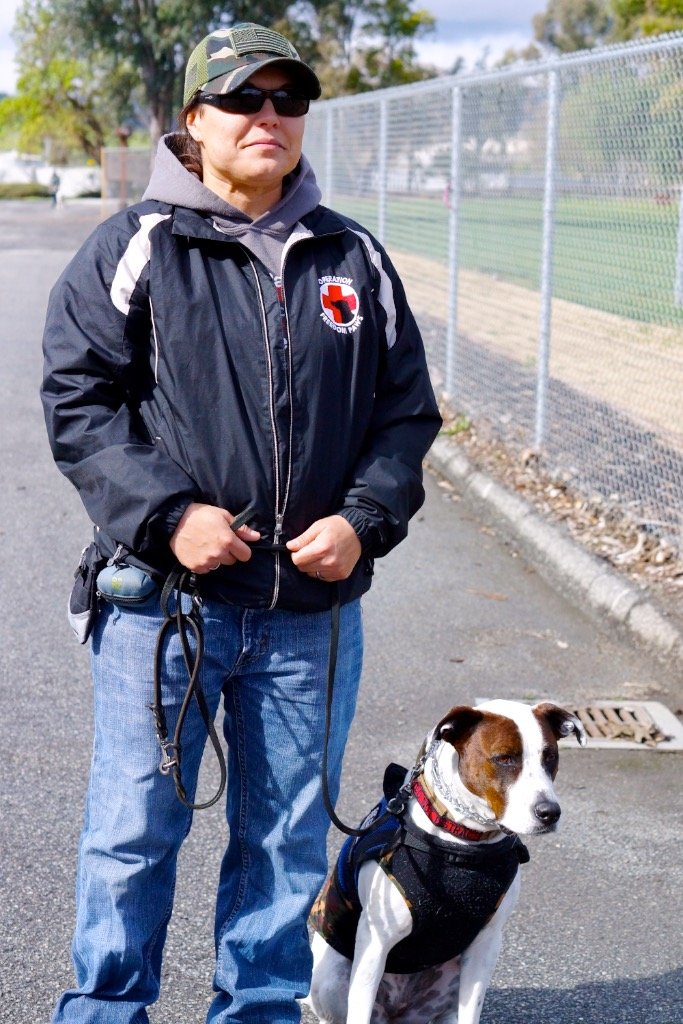 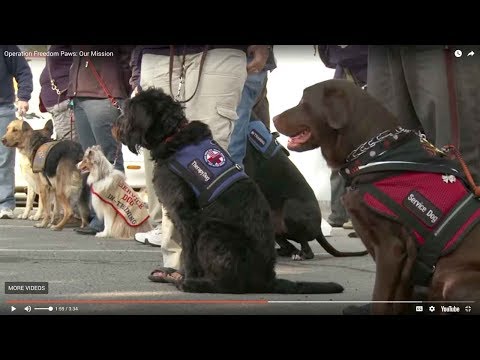 By Janet Wenholz - Sr. Assistant to the Executive Director 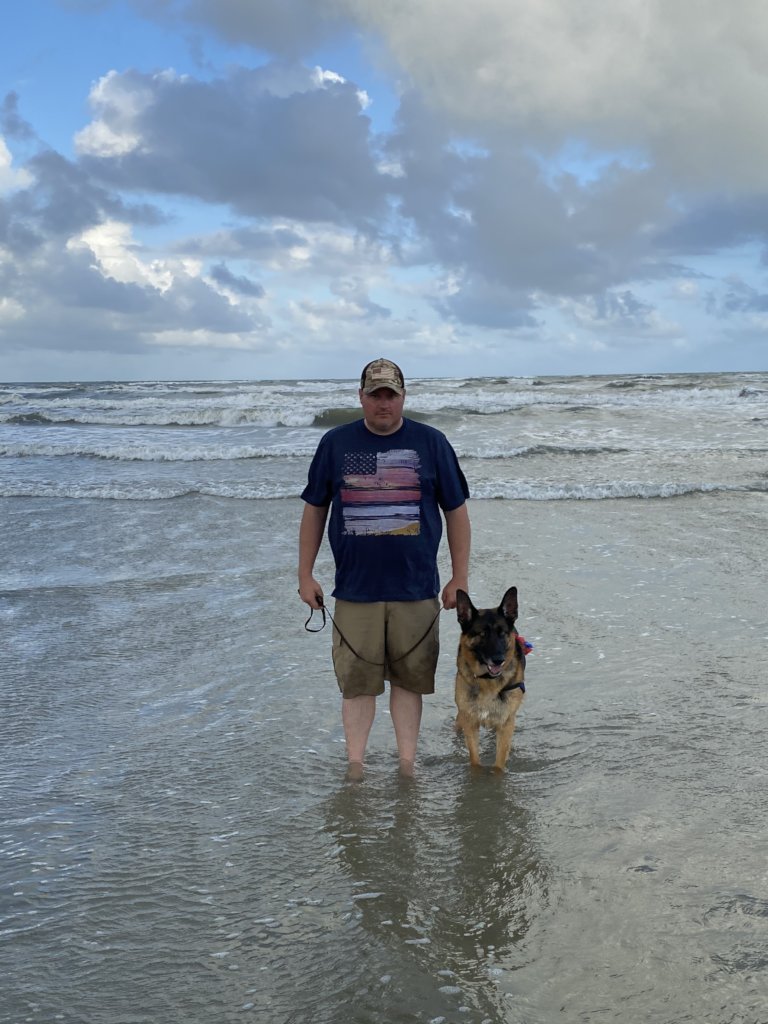 The Operation Freedom Paws program is complex, which is why it lasts a year. Things can happen that prevent a client from attending classes. Medical challenges, job changes, family issues---any one of those can create significant roadblocks. For Army veteran Robert and his service dog Chief, all those challenges have come into play during the past two years. First, Robert needed a complicated back surgery that had to be done twice. Thanks to OFP’s training, Chief and Robert knew just what to do to help him stay calm, heal, and gradually reduce the need for pain medications. During his recovery, we remained in touch, celebrating each small victory. Robert told us that our frequent contact helped him stay hopeful and grounded during his long and difficult rehabilitation. When the team finally returned to class, Robert told us about some significant psychological breakthroughs he had experienced in talks with his VA therapist. OFP’s mental health professionals were able to help him incorporate Chief into the exercises the VA had given him, and develop new coping skills. Upon his return to work, Robert was told that his office was being eliminated. He discussed various options with OFP staff before making a final choice, knowing we would have his best interests at heart. That level of trust is hard-earned, and we were honored to be included in the decision-making process. Ultimately Robert decided to move to Texas, where he has been for the past year. We correspond with him regularly. He and Chief continue to use tools he learned during his OFP training and work on new tasks.

Although he had never mentioned it while at OFP, Robert has been afraid of the ocean since Hurricane Katrina. He and Chief visited Galveston last week specifically to face that challenge. Chief led Robert into the water without hesitation, and Robert’s now-ingrained trust in his dog allowed him to manage and conquer his fear. Teaching our clients to accept their dogs’ ability to discriminate between real and perceived dangers is one of the important lessons this team learned after starting their training in 2018. Although no longer able to attend classes, Robert continues to benefit from relationships he formed with OFP staff members. Every day he builds on the foundation laid in training. He is now able to ask for help when he needs it, and is successfully accomplishing his goals, despite the challenges life has thrown in his path.

By Janet Wenholz - Sr. Assistant to the Executive Director 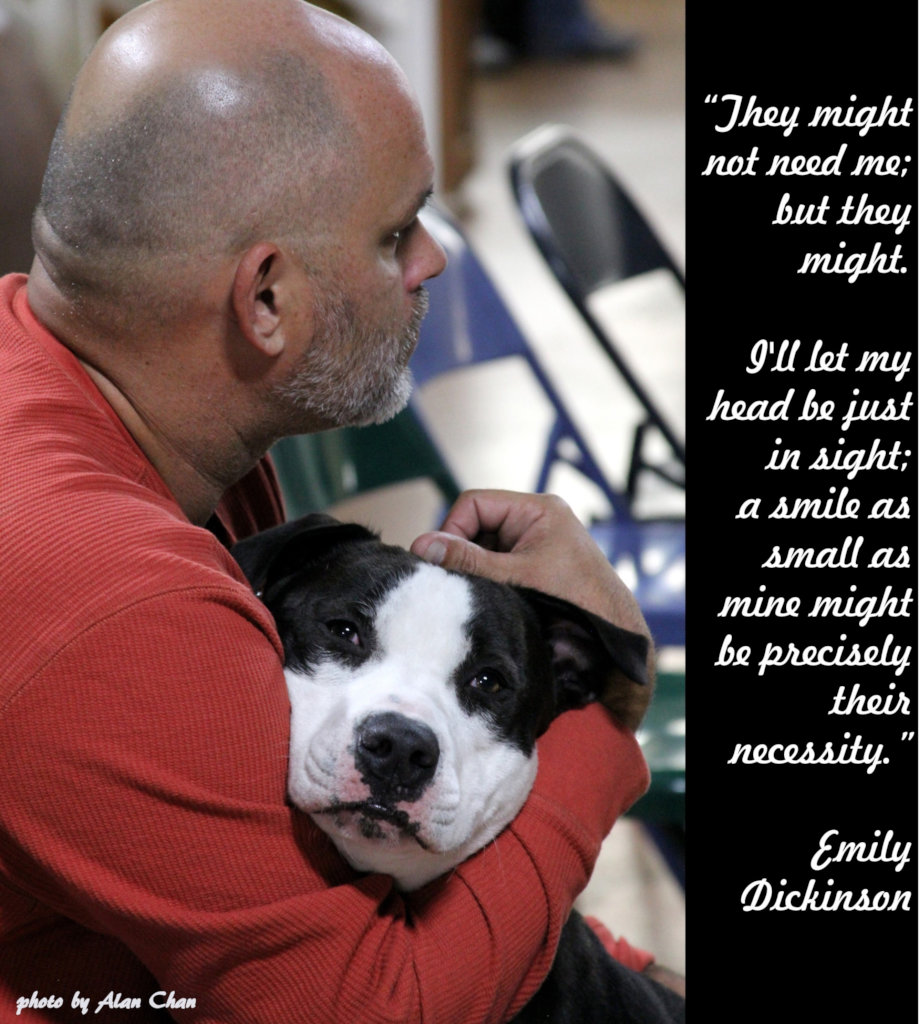 Recently we got a call from Chuck, a Navy veteran who was matched with his rescued dog Zeus in October 2017. They graduated from the Operation Freedom Paws program in December 2018. Since then Chuck has worked hard to put self-destructive behavior behind him, and he has even started college. Chuck told us he had been driving when Zeus alerted him. Recognizing the onset of a severe panic attack, Chuck immediately pulled over and started practicing the grounding exercises he learned at OFP. He got out of the vehicle but became even more anxious, so he and Zeus started to walk. Monitoring the dog's behavior, as OFP taught him to do, he knew he was in no immediate danger. Then he began to examine his reactions to the surroundings. A block away, after he was able to get himself fully under control, Chuck realized the odor coming from a building was the trigger. Until that day, crowded places and certain noises had caused Chuck to have panic attacks, but never smells. As he analyzed the situation, he was able to diagnose his subconscious reaction to the odor. In 2004 he was a member of Operation Unified Assistance, the American military's humanitarian response to the devastating 9.3 earthquake and tsunami in the Indian Ocean. The building’s smell triggered memories of his traumatic experiences during the weeks he spent there, causing his panic attack. He knew if he reached out that someone from OFP would talk with him about his reaction and response to this new trigger and give him additional coping skills for the future.

Our training supplements the work clients do with their psychiatrists and therapists. We teach handlers to recognize their service dogs’ alerts to identify the onset of anxiety before it becomes critical, along with techniques to help them stay in the present moment and manage the severity of these occurrences.

COVID19 requires that we take even more care when interacting with our disabled clients. While we take all reasonable precautions to protect our own health and that of everyone we contact, we at OFP continue to perform our mission. Our clients are among the most physically and psychologically vulnerable members of the population. We are holding smaller classes on our regular schedule, communicating by email and phone with those who can’t come to us, and making sure they know we are available if they want to reach out.

We have over 100 applicants on our waiting list, and 50 teams actively trying to reach the level of independence Chuck and Zeus have achieved. Without your support, OFP does not exist. Uncertainty surrounds us all right now, but you can be confident that we will continue to rescue dogs, match them with grateful humans, and give both the promise of a better future. 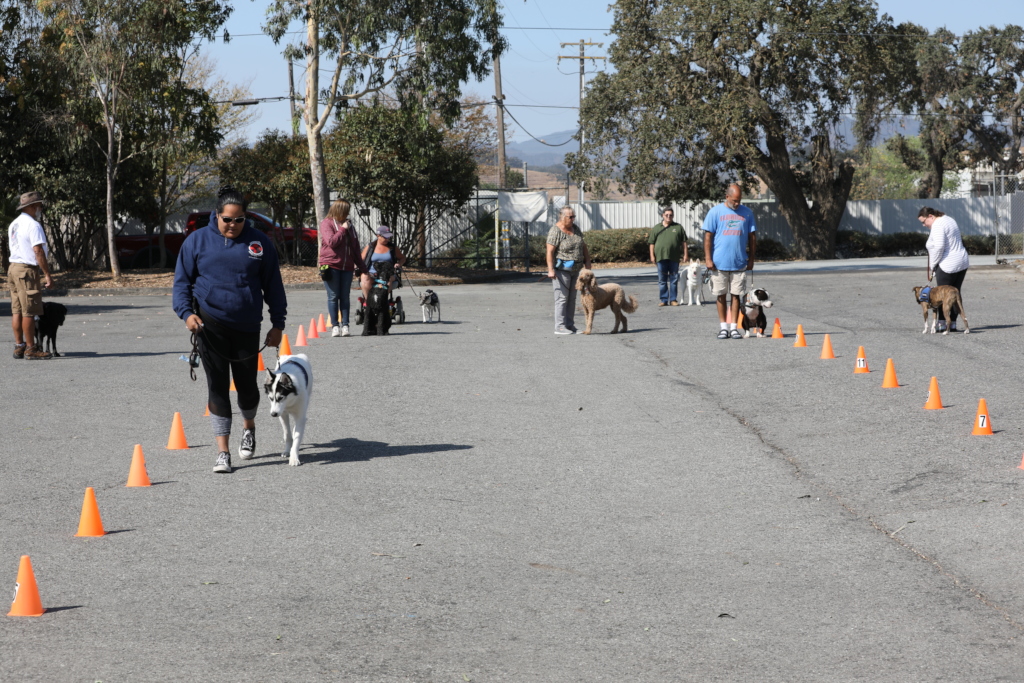 Thanks to your generous donations and our negotiation of pricing we were able to order (and are awaiting arrival of) 7 pieces of agility equipment to help build confidence not only for our disabled veterans, but their service dogs as well. The small victory of being able to train your dog to go up stairs and sit at the top of a platform, or walk under an archway run helps to build our client's confidence and restore their freedom to live life by giving them the knowledge that they can accomplish something new and unkown with their dog in any circumstance.

Thank you for giving the gift of freedom to our veterans, adults and children with disabilities. Your contribution will have an enormous impact on many lives, for years to come at our canine education center! 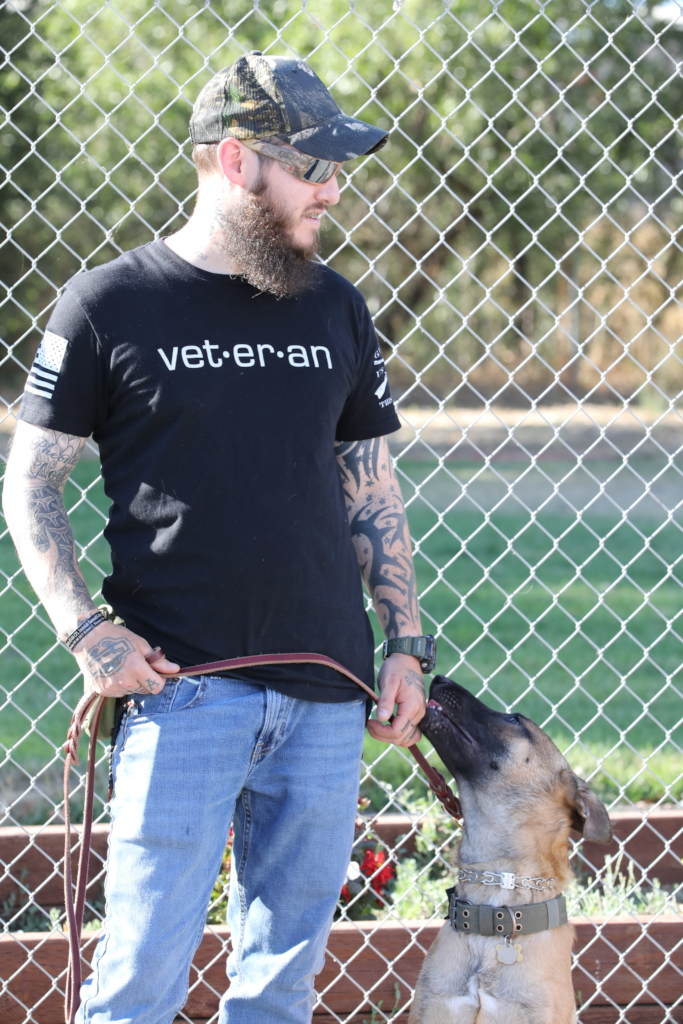 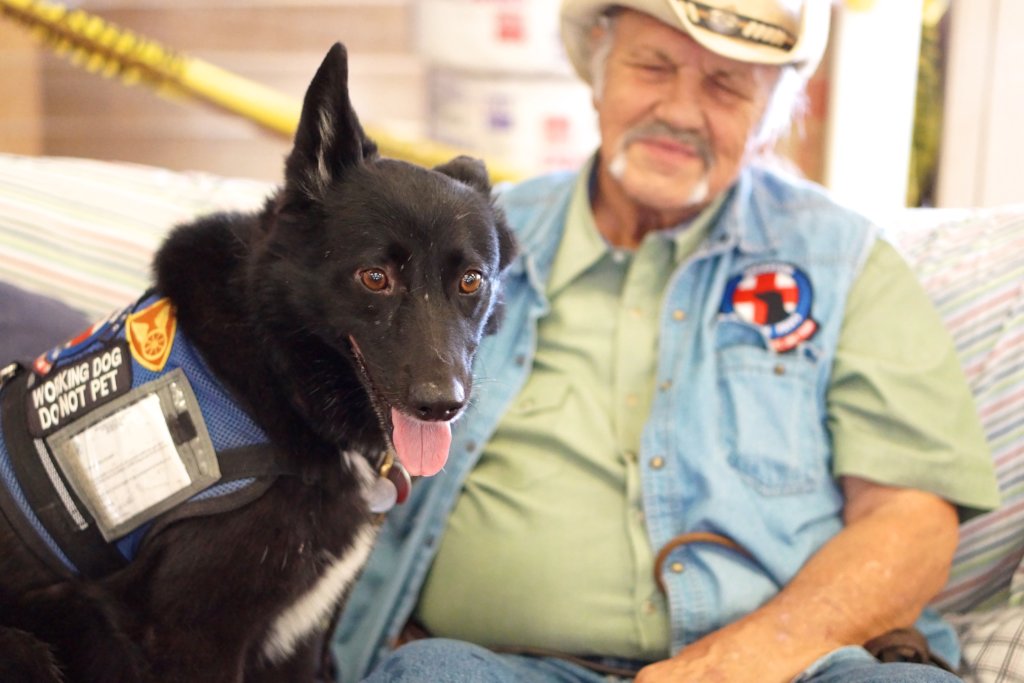 Thank you so much for your donation to our Training Service Dogs for Veterans Project! Your dollars are contributing to our mission of veterans and individuals with disabilities restoring their freedom to live life through the training of a service animal utilizing new training equipment. Here is the progress of the project as it stands:

While we are working on securing the equipment, we continue our mission of matching rescue dogs with veterans and individuals with disabilities and training them together to be a service dog team.

Since the start of this campaign we have matched 8 teams. Each team while with us will not pay for any equipment, training, food or veterinary care, as well as those who require will receive other services provided to heal the individual and make them whole. All of this averages $15,000 per team, so having been able to add 8 within 3 months is incredible. These 8 teams are a part of the 50 active clients who will be able to utilize the equipment your dollars are helping us secure, not to mention the many graduated clients who continue to come back ensuring their training and partnership with their service dog is strengthened.

We thank you again for choosing to support us, from the bottom of our hearts! 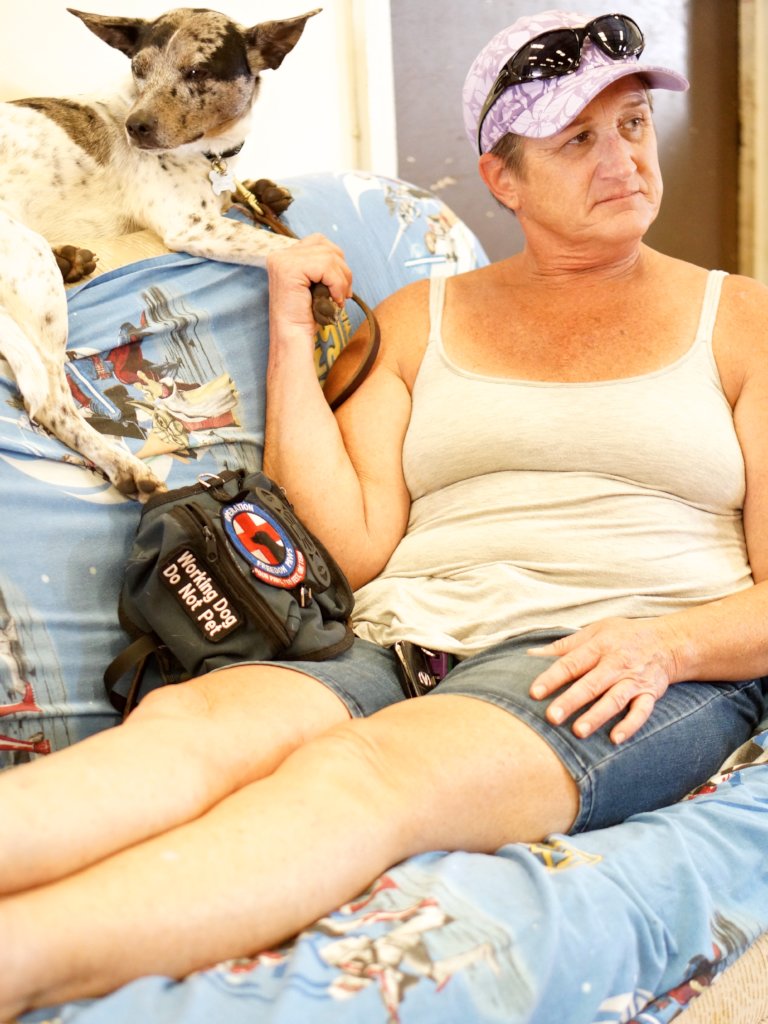 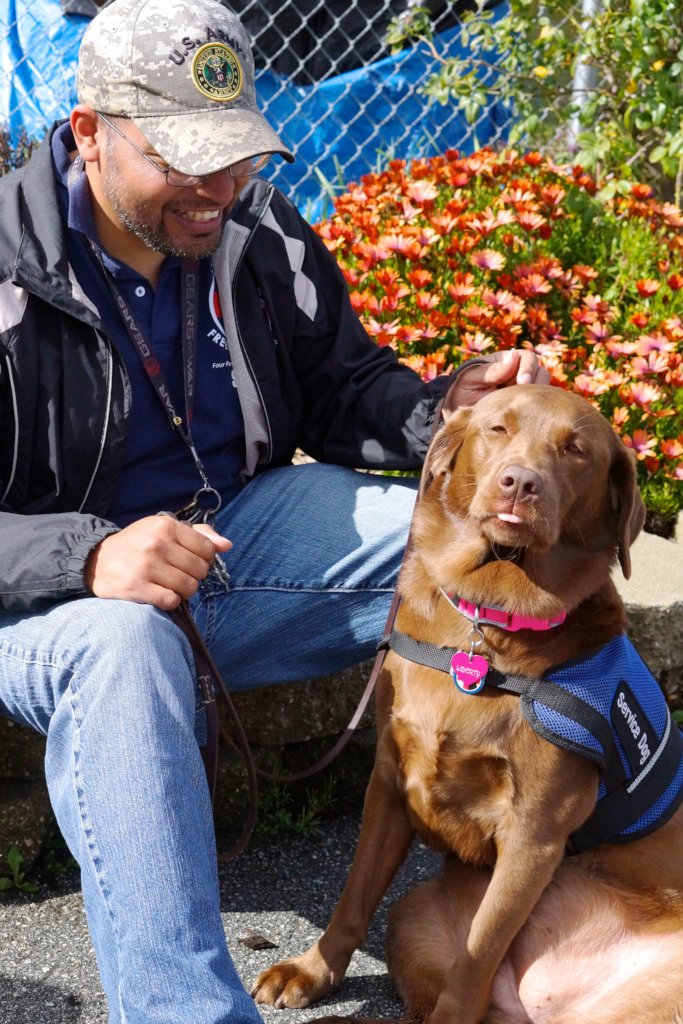 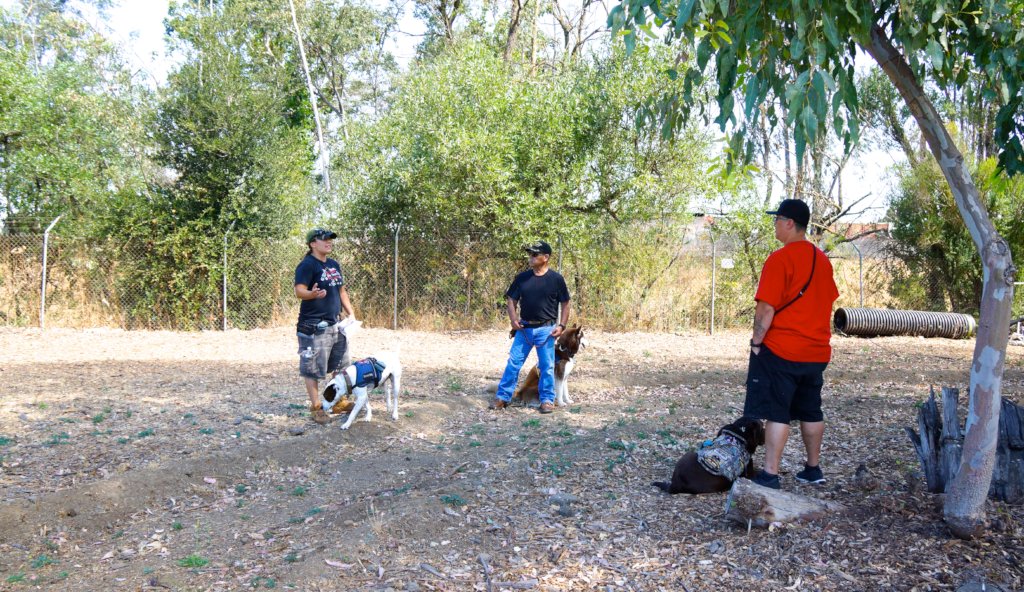 Support another project run by Operation Freedom Paws that needs your help, such as: 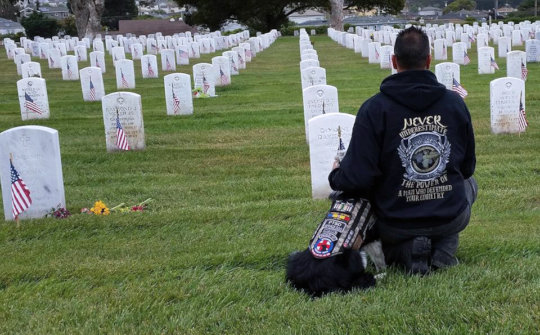 Save both Veterans and Rescued Dogs today!
Find a Project

GlobalGiving
Guarantee
Donate https://www.globalgiving.org/dy/cart/view/gg.html?cmd=addItem&projid=33792&rf=microdata&frequency=ONCE&amount=25
Please Note
WARNING: Javascript is currently disabled or is not available in your browser. GlobalGiving makes extensive use of Javascript and will not function properly with Javascript disabled. Please enable Javascript and refresh this page.