by The Jean Houston Foundation 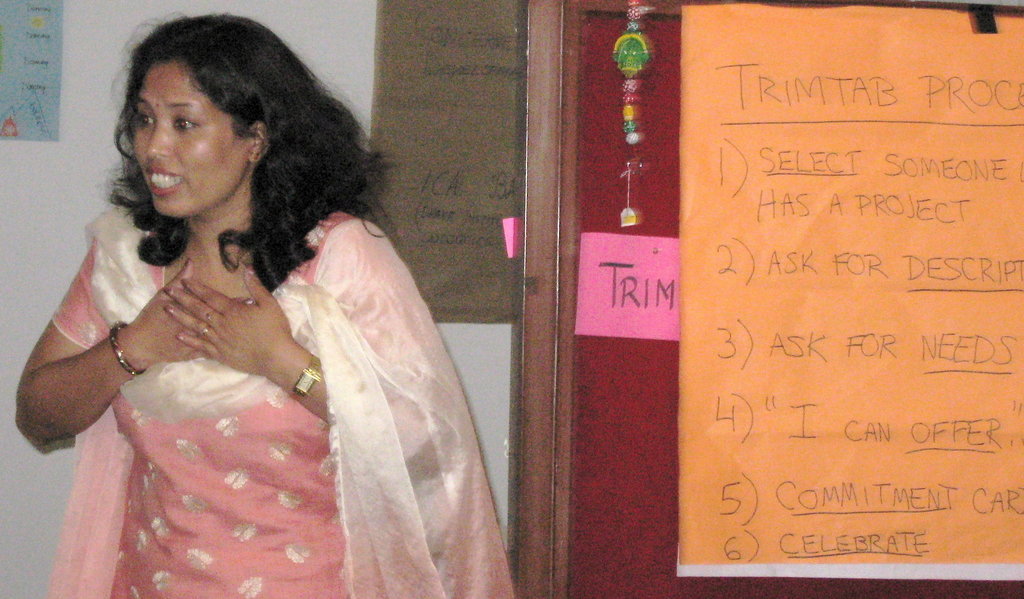 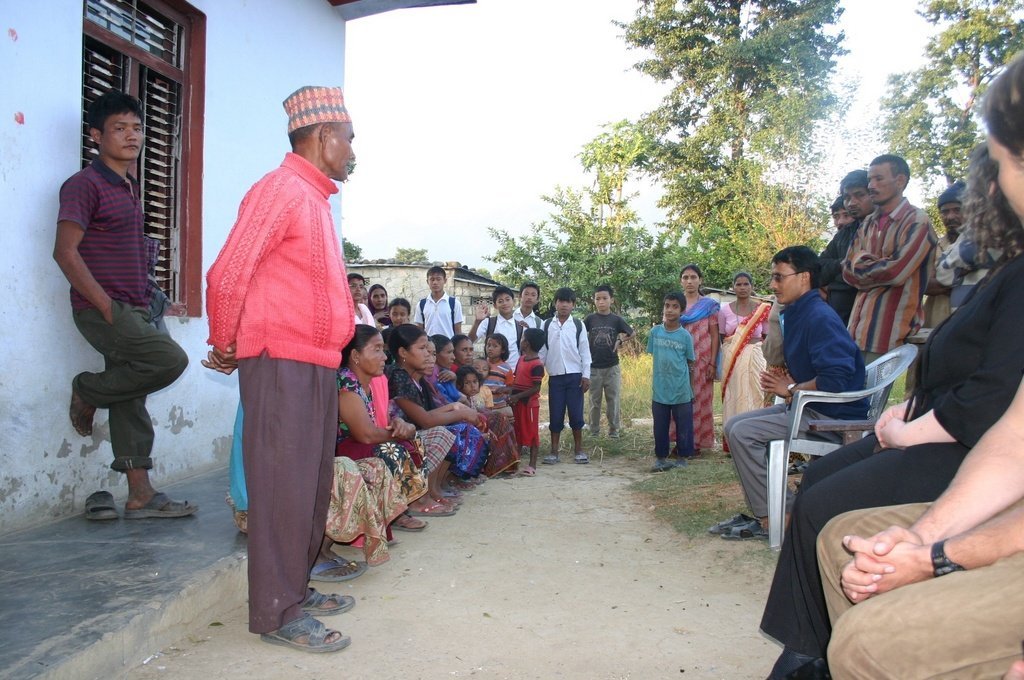 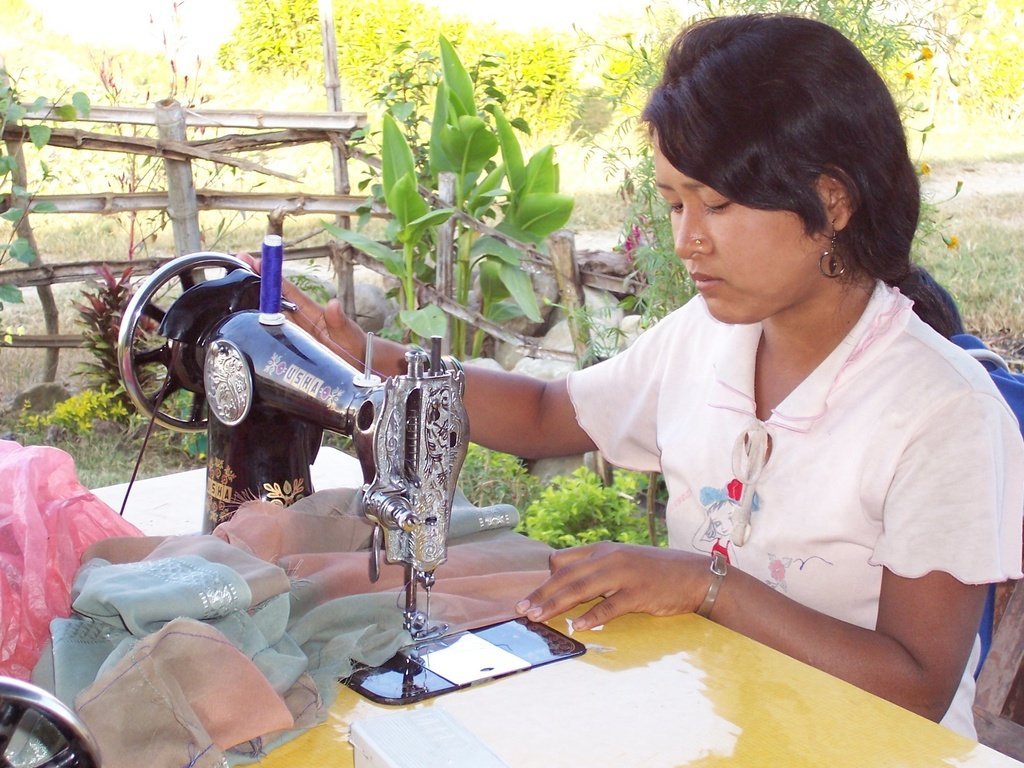 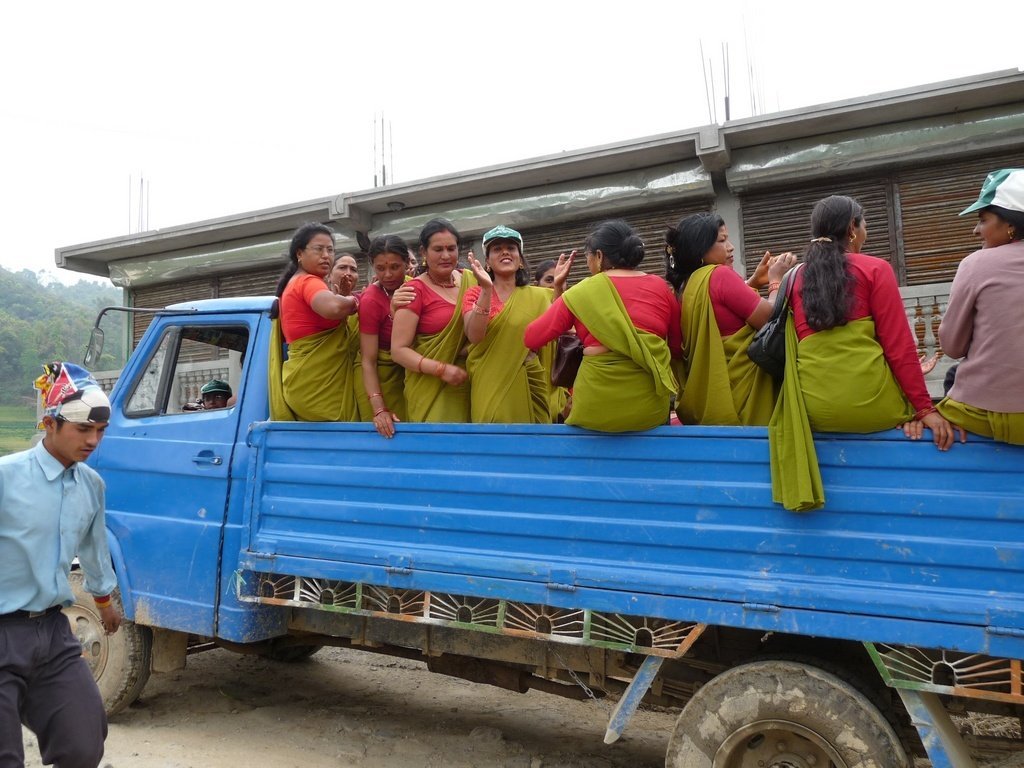 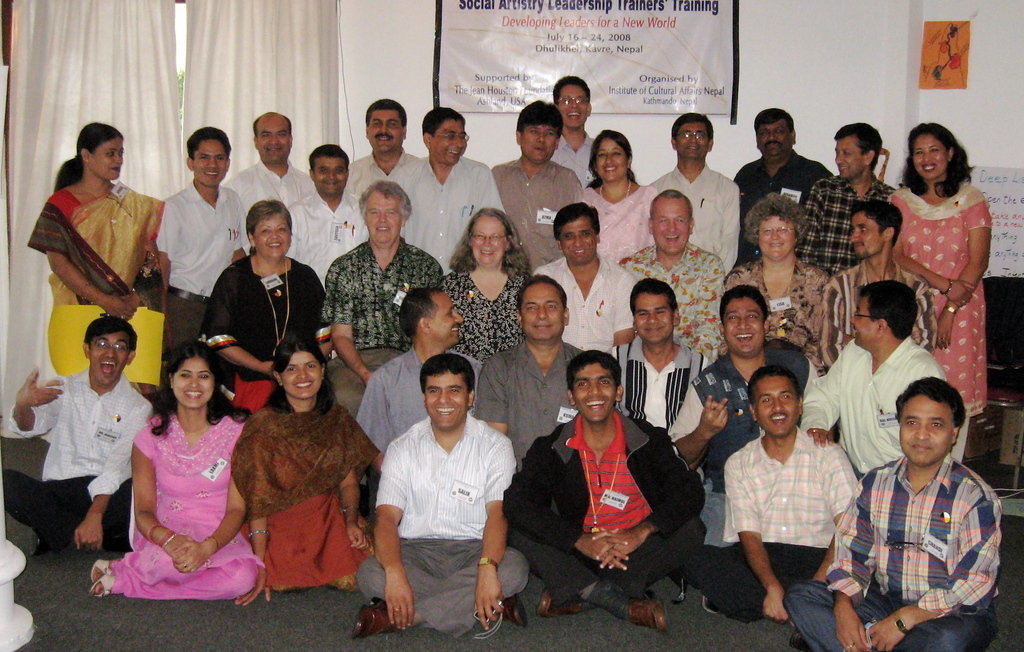 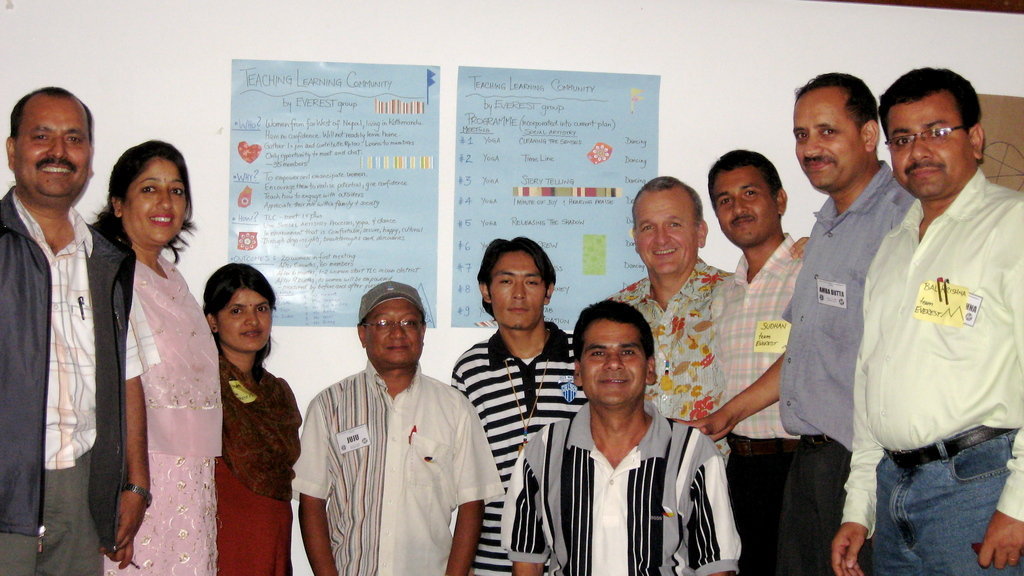 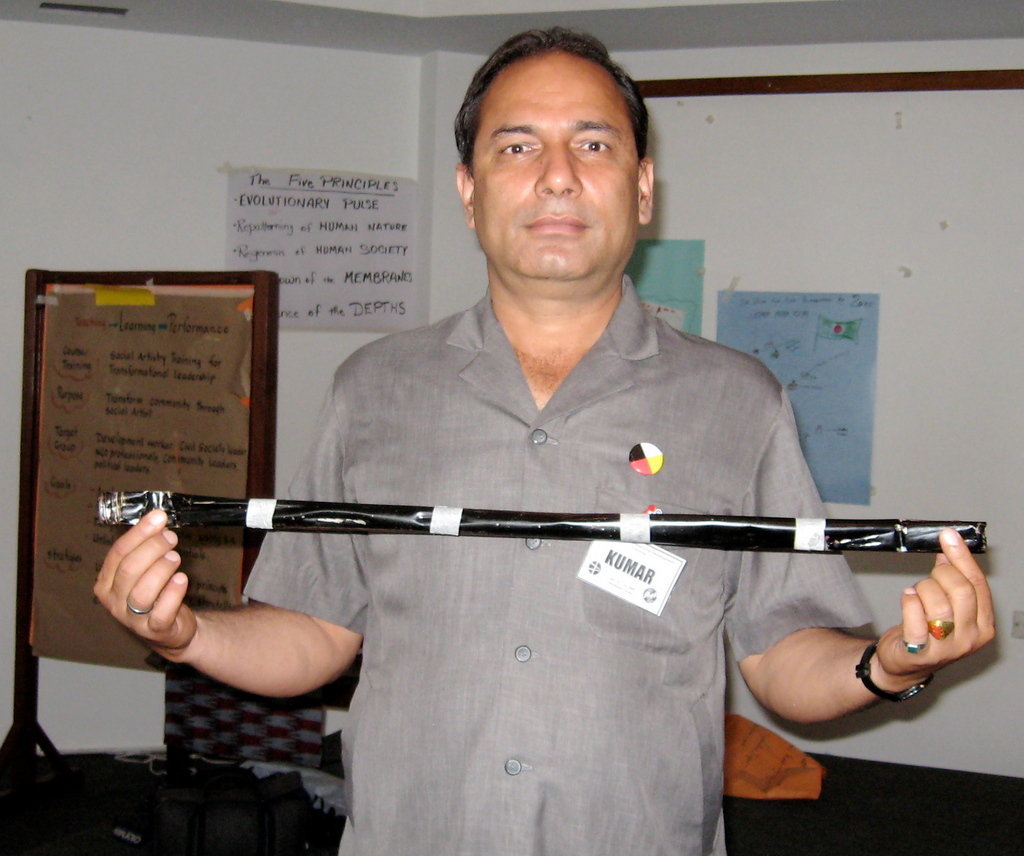 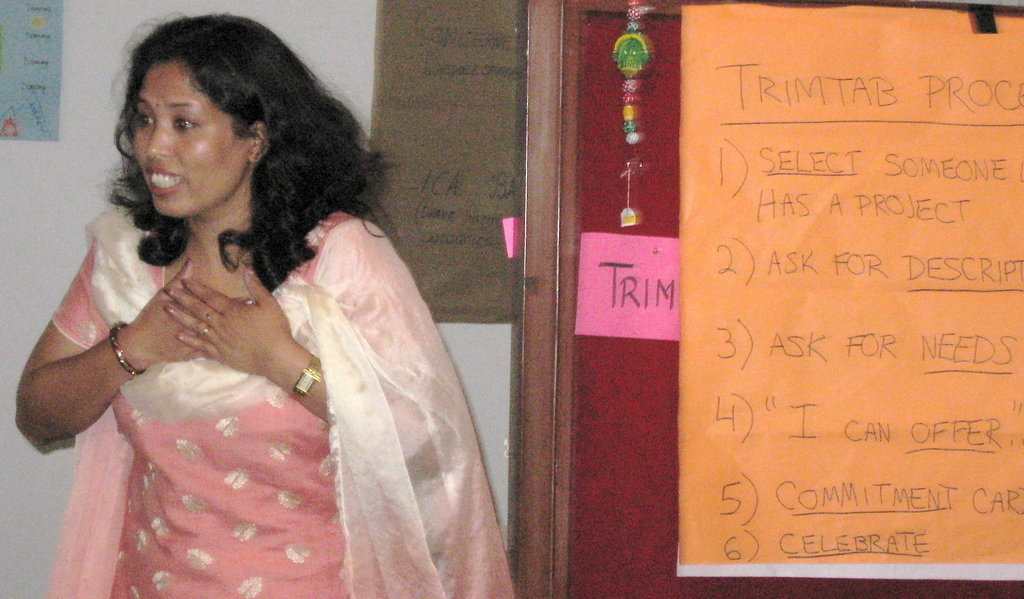 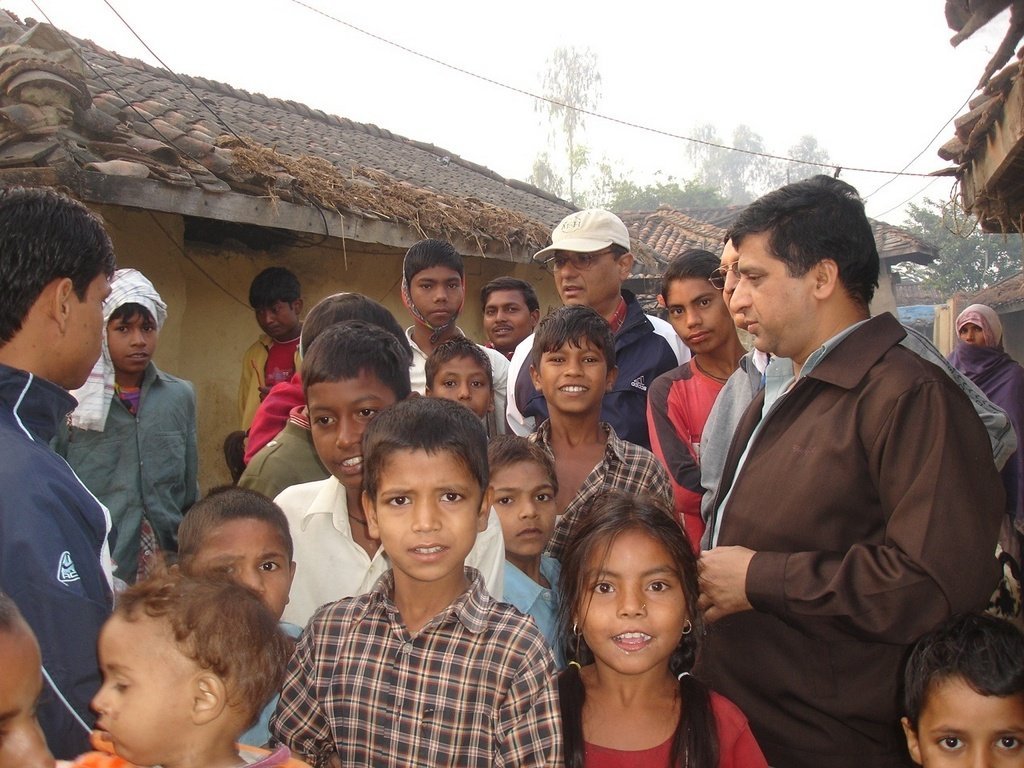 Akim Shrestha and Anita Shrestha, two Social Artistry trainers from the Nepali leadership team in Kathmandu were able to participate in the events.  They returned to Nepal to share with their team the processes and knowledge they gained from the events.  Akim is one of the first first social artists in Nepal and brings Social Artistry into her work as well as significant contributions she makes in her volunteer social change activities.  Anita's focus is bringing the power of Social Artistry to leadership in the political arena, both local and national.

Social artists in the USA continue to support the work in Nepal with monthly contributions.  The Nepali leadership team of 8 social artists (overseen by Tatwa Timsina) are in charge of leading the Social Artistry work in Nepal.  This includes local and regional introductions to Social Artistry, community development projects to address training of youth, agricultural initiatives for food sustainability, education, reduction in infant mortality and other related endeavors. 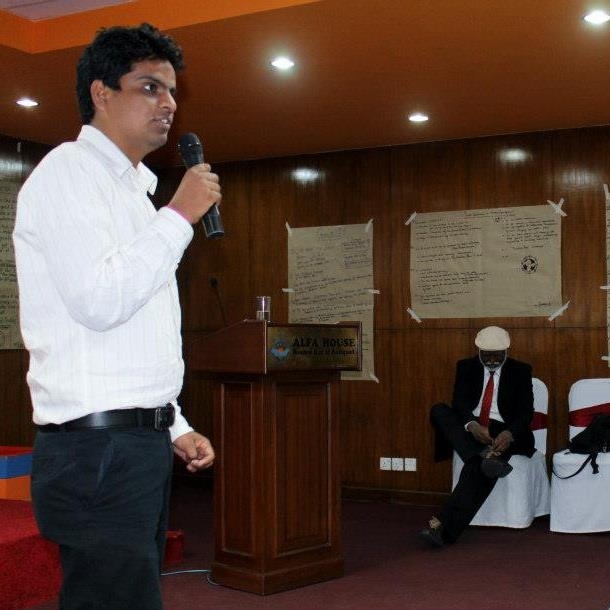 I’ve just returned from a whirlwind of Social Artistry activities in Nepal.  I headed to Nepal to participate in The Institute of Cultural Affairs (ICA) 8th Global Conference on Human Development.   ICA and Social Artistry have a long history of collaborating in various parts of the world.  Participating in the events included the following Social Artists: Rob Work, Rosemary Dowling, Karen Johnson, Marie-Therese Fournier, Evelyn Philbrook and myself.   The Social Artistry network in Nepal was also quite engaged including some of the folks you have met, Tatwa Timsina, Amba Bhattari, Atma Timsina, RC, Pramila, Juju and Kusendra.  Deepak coordinated the two-day youth conference.   The time provided an incredible mixing of friends and colleagues from the SA and ICA networks—working together.

The following is a brief snapshot of the events that happened.

Pre-Conference events included a sacred sites tour of the Kathmandu Valley and a two-day introduction to Social Artistry attended by over 30 people from 8 countries.

The conference had over 300 at the opening and 200 daily participants in six theme groups.  I coordinated the theme group on ‘Growing a New Sense of Leadership’.  Rob, Rosemary, and Marie-Therese joined me and several of our Nepal social artists in this group.  After two-days of discerning the key components of the new emerging leadership, Rosemary, Amba joined Kevin Balm of Australia and Mark Pixley of China to design a mandela holding 4 key external components and 4 internal components of a new leadership.  A final model is being drafted.  We will continue to have virtual dialogues on our understanding of the new leader and how to create the environment for the development of these leaders.

Karen Johnson joined the Education of the 21 century theme group, sharing her insights from the Teacher as Social Artist.

The Leadership theme and the Community Development theme-group both had a field visit to Nela east of Kathmandu to visit with Social Artist Nirmala Shrestha , a women leader, mobilizing hundreds of women and youth by applying SA.

A smaller group gathered to harvest and celebrate the conference at Nagakot, the top of the first ridge of mountains surrounding Kathmandu.  The sunrises were amazing, if you stood on tip toe you might catch a glimpse of Mt. Everest.   We provided updates on the national work of ICAs and associated organizations.  Evelyn and I shared our work globally on SA.  There were also additional expressions of interest for Social Artistry from India, Sri Lanka, China, Taiwan, Chili and Europe.

Pramila, Evelyn and I traveled to the TITI (Technical Training Institute) for a three-day Introduction to SA for over 40 of their staff.  They wanted a team building and vision experience for a cross section of their staff.  We also conducted a one-day training for a TLC that Pramila is helping conduct.

Finally, we gathered for a ½ day congress to explore the next year of "growing the field of Social Artistry."   We conducted a trim-tab for the future development of Social Artistry Introduction workshops and micro-grants.  ICA Nepal will continue to host the SA workshops and coordination of initiatives.  The broader Social Artistry network will support this for a year with a $300 a month grant.  This will enable a part-time person to coordinate and implement training events. 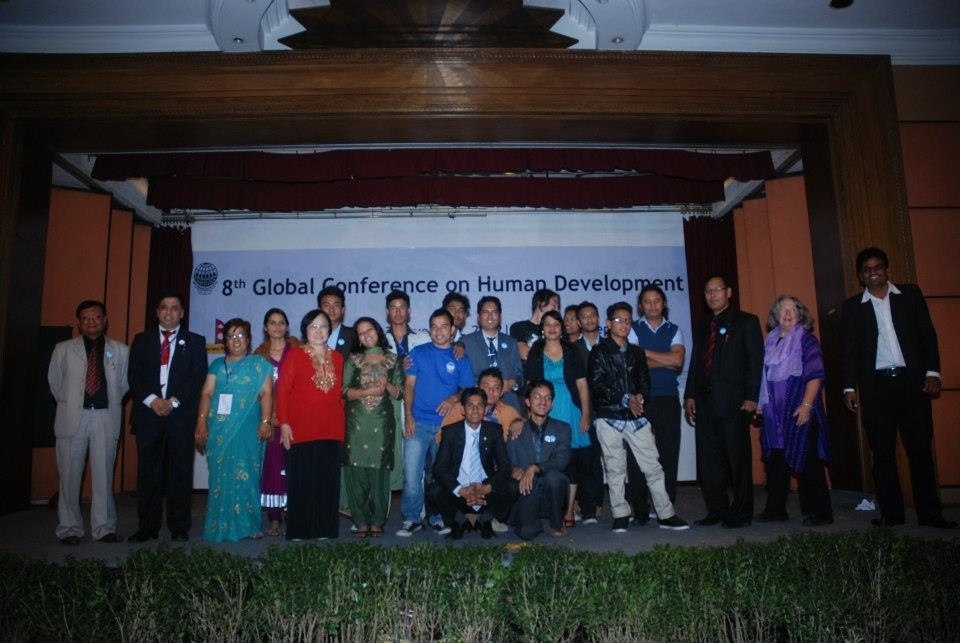 October Trainings to Support the Leadership Work in Nepal

The Nepali Social Artistry trainers are busy preparing for the events. Thus far, there are over 100 particpants from Nepal enrolled and 75 from other countries.

Progress in helping people develop inner capacity skills continues In Kathmandu, Devdeha and outreaches of Nepal as the Nepali trainers conduct introductions to Social Artistry.   The training events and conference in October will be an important occasion for Nepali Social Artistry trainers to bring their skills and visions for their projects to a new level.

Funds that are donated from now through October 15 will be used to assist with expenses for trainers and leaders to attend the October trainings.

By Peggy Dean - Executive Director
Jean Houston, the original developer of Social Artistry, will be one of the keynote speakers at the ICA International Human Development Conference in Kathmandu in October 2012.  There will be an opportunity during the conference to make alliances with the ICA directors from other countries to begin training the leaders in the Social Artistry approach to community development.
Preceeding the ICA Conference will be a Social Artistry training in Kathmandu open to the public.  The training will be conducted by the Nepali Social Artistry trainers.   The Jean Houston Foundation's core trainer and international training coordinator Janet Sanders will be in Kathmandu during this time to support the Nepali trainers and to conduct an advanced trainer's training.
Invitation to Come to Kathmandu, Nepal:

Join Jean Houston and Jan Sanders and experience the ancient culture and future-building society of Nepal next October. The Institute of Cultural Affairs will hold its international human development conference Oct. 29-Nov. 2 in Kathmandu this fall.  Jean Houston will be the keynote speaker, and there will be a special Introduction to Social Artistry and Nepali Culture program immediately preceding the conference Oct. 27-28, with an earlier tour of Social Artistry projects and cultural heritage sites in the Kathmandu Valley Oct. 25-26, and opportunities to tour other parts of Nepal following the ICA conference.  Stay tuned for more of the Social Artistry details, and check out the ICA conference website at http://www.humandevelopmentconference.com/

In 2008 the Jean Houston Foundation (JHF) entered into a partnership with ICA Nepal to launch research on doing micro-grant projects.  A Kathmandu Rotary club participating in the project selected 30 projects across Nepal to receive micro-grants of $30 to $100.00.  One of those grants went to Durga who applied the money to launching organic farming in the Devdaha area of Nepal.  Durga had previously participated in some of the training programs of Social Artistry, so he had developed good leadership skills.  Durga had the thought of doing organic farming for several years; however, he could get no financial support of the operation.  The one-hundred-dollar micro-grant provided that ‘seed money’.

In late 2010, our Foundation trainers visited Devdaha and the neighborhood of  Sarandanti to witness the progress of Durga’s project. Devdaha is situated in the lap of the green forested chure hills in the western part of the country, which is known as the mother’s birth place of Lord Gautam Buddha.

The results they discovered were a thriving organic farming practice along with markets in the larger city to sell the produce.  The holding building for the crops became the training room for a community introduction to Social Artistry training.  Durga has commented that he felt the ‘trim-tab’ project was an excellent way to provide the whole community with the sense of vision and the opportunity to participate.  Initially skeptical of the idea of farming, the community is now totally supportive.

The 2-day training was coordinated by Durga with the support of the community cooperative which has been set up to oversee the development of the organic farming.  The Foundation faculty was the first to try out the homestay dynamic—staying in two of the homes and eating with the village families.  Faculty included the JHF training coordinator Jan Sanders, JHF trainers Evelyn from Taiwan and Amba from Nepal as well as three additional Nepali members who have begun their Social Artistry training journey.

The introduction to Social Artistry proved to be an exciting time for the community as they began to see future possibility for themselves and their children.  The basic exercises were to tap the inherent capacities for greater imagination, compassion, and resolve.  Faces beamed during the development of banners for the possible human.  Two trim tabs were conducted.  One was for the preservation and future development of their Magar culture and the other for an expanded home stay dynamic.  The community is the maternal home of the Buddha with a significant temple at the top of their mountain, and visitors need a place to stay in order to visit the temple.   In addition, further work on the organic farming and a school for the younger children was explored.  Durga and the ICA Nepal team have developed a proposal for future training and some additional micro-grant support, as Devdaha is becoming a dynamic model for community development that can be applied in other parts of Nepal.

Summary of the Project Proposal

The goal of this project is to bring change in the community with the help of Social Artistry leadership training.

The project “Social Artistry Training for Leadership and Human Development in Devdaha, Rupandehi in 2011” aims to empower community people through training and project activities in Devdaha, Rupandehi. This project is the continuation of the joint project of Jean Houston Foundation (JHF), USA and Institute of Cultural Affairs (ICA), Nepal

The project will seek out the concerns of the community, and these concerns will be solved by involving the community in the planning and implementation. The objectives of this project are to train 300 community people in Social Artistry leadership skills and improve the environment of the community through 40 developmental projects. Providing the master level training, introducing Social Artistry to 300 people and conducting the campaigns to implement the projects are the activities of this project. The monitoring and evaluation will be done simultaneously. Over 2,000 people will be benefited by the massive awareness campaign and environmental improvement activities. The majority of the project will be carried out by Nepalis. The total budget of this project is $118,186.

Some Needs Identified in the Proposal

1.              The people want to develop their village as a tourist area, but they don’t have proper management, i.e., rooms, bedding, toilets and a well serving system. They need to build toilets in each home and they need training in the behaviors of how to serve the guests.

The people of Devdaha need our help.  Contribute today and be part of helping to build a model community and the nation.  What may seem a small contribution goes a long way.

GlobalGiving
Guarantee
Donate https://www.globalgiving.org/dy/cart/view/gg.html?cmd=addItem&projid=4319&rf=microdata&frequency=ONCE&amount=25
Please Note
WARNING: Javascript is currently disabled or is not available in your browser. GlobalGiving makes extensive use of Javascript and will not function properly with Javascript disabled. Please enable Javascript and refresh this page.