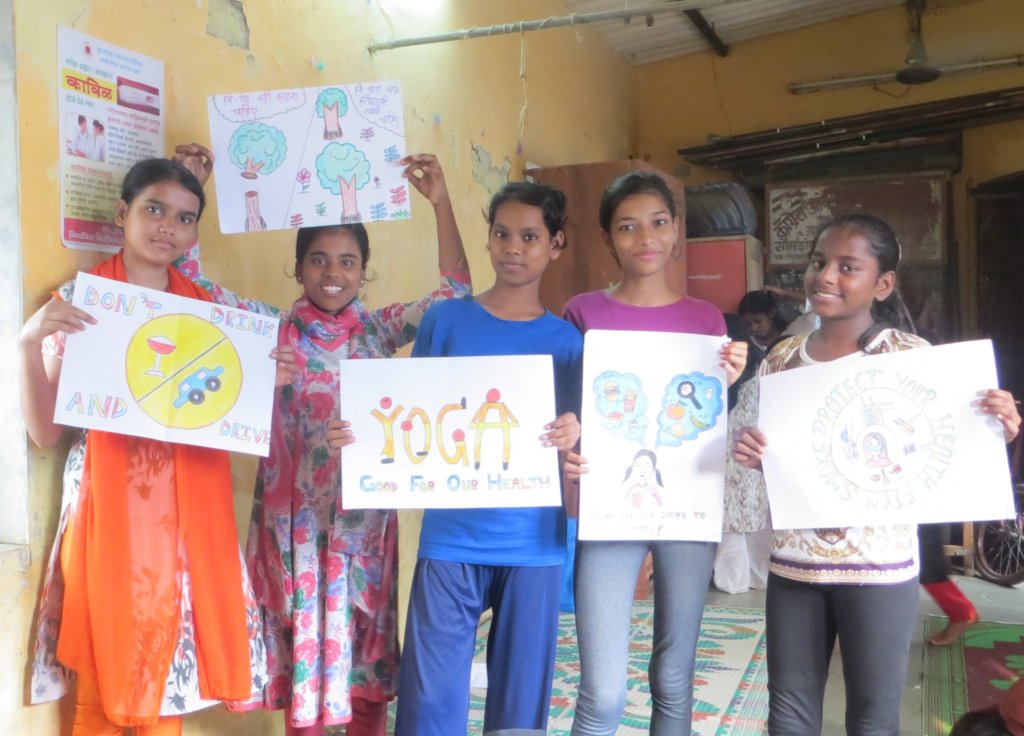 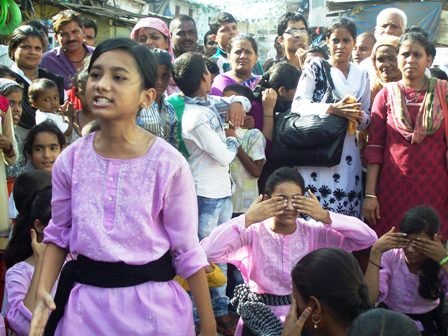 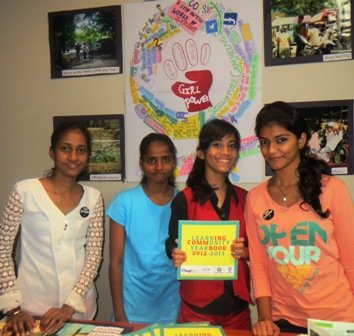 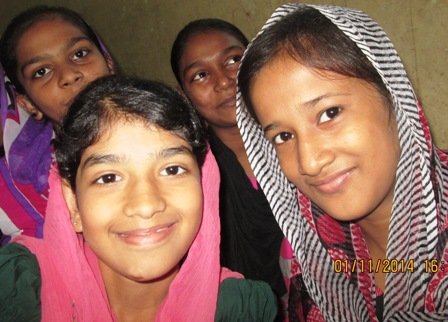 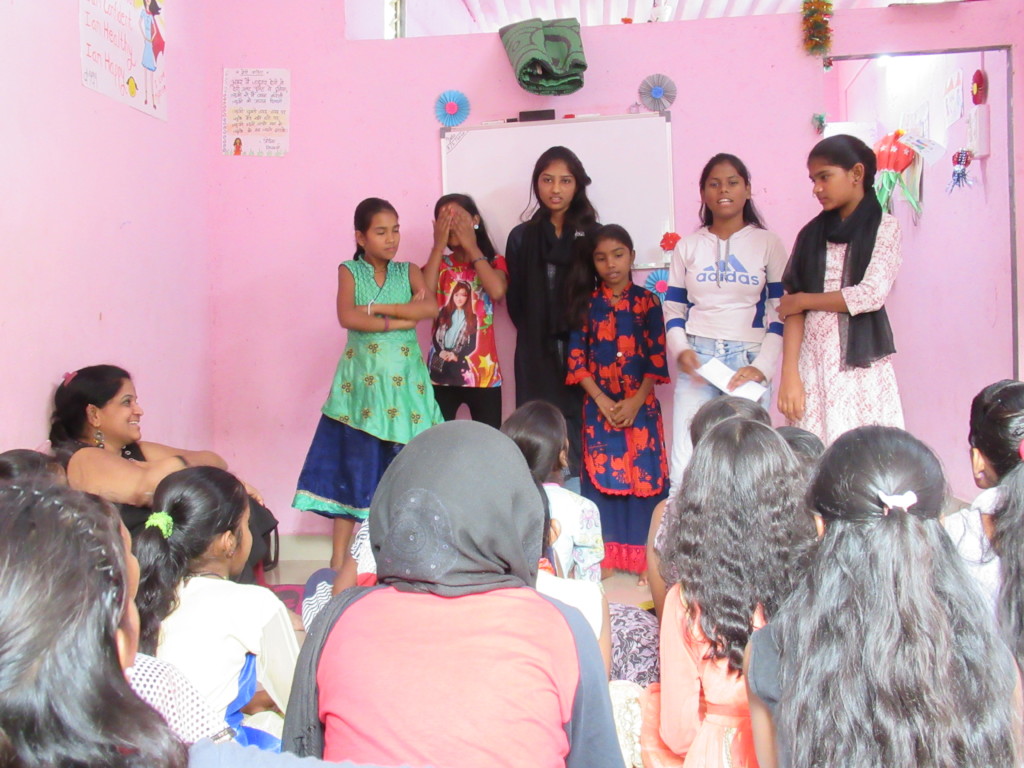 Thank your for your support.

Along with countless special days, festivals and religious holidays  in India, some new Western special days are now being celebrated in Indian cities and districts , Valentine Day is one such special day. Vacha works with youth from deprived communities where old conservative norms still prevail. Not just dating but even friendship with a person  of the opposite sex is frowned upon. The elders would not allow permission for any celebration but the young people do manage to get together. Secretly some youths often become involved with the other sex and refer to them as boys friends and girlfriends. Others are also attracted to ideas of love and romance. Vacha organized workshops to discuss  the concepts of love and romance in local cultural traditions. Can romance lovingly support ideas of gender equality? What do the popular love songs suggest? What price a girl would have to pay if found involved with a boy?  A discussion was essential and we had to be careful and not delegitimize sweet feelings they develop after arrival of puberty.

Romance often progresses in to becoming sexually active, a phenomenon just not allowed. Contraceptives are freely available. Abortion is legal and, in public hospitals, it is free. But Sex Education is banned in schools. Our programme participants get ideas of sex from porn on cell phones, dirty drawings in public toilets, ads for contraceptives and abortion clinics and watching married couples’ lovemaking in their small crowded hutments. The sessions on Romance were very well received and youth asked many questions related to sex. We generally put these issues in our Health and Gender workshops as legally Sex Education is not allowed and there is a dire need for youth to understand the issues in context of various sexually transmitted diseases including HIV and AIDS.

Giving flowers and  love messages and gifts are fine and cheerful. However, in deprived communities Romance had also to be discussed in the background of their own life in communities as they have largely migrated to areas in Mumbai and nearby in search of livelihood. They bring with them orthodox traditions and mindsets and their children have to cope with new concepts in a new reality. 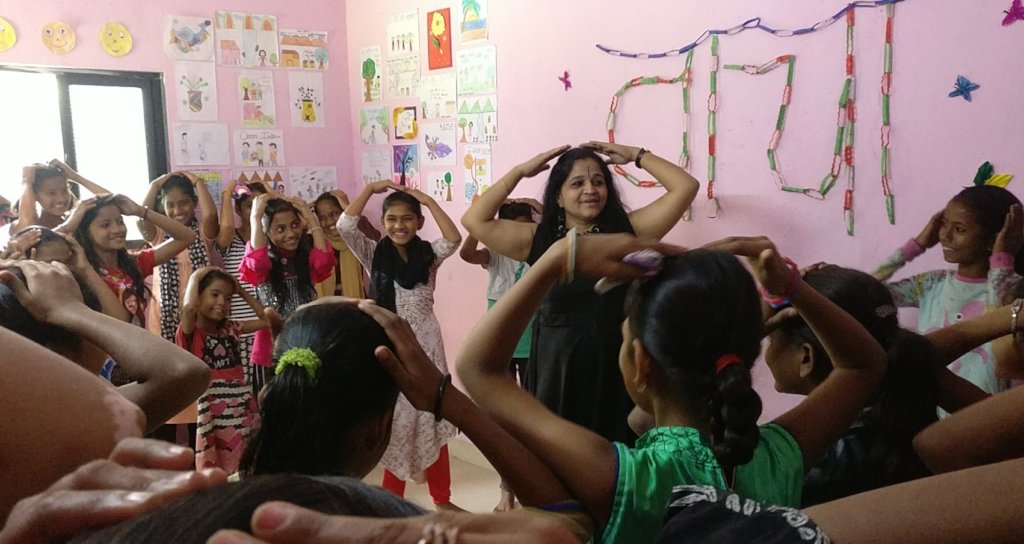 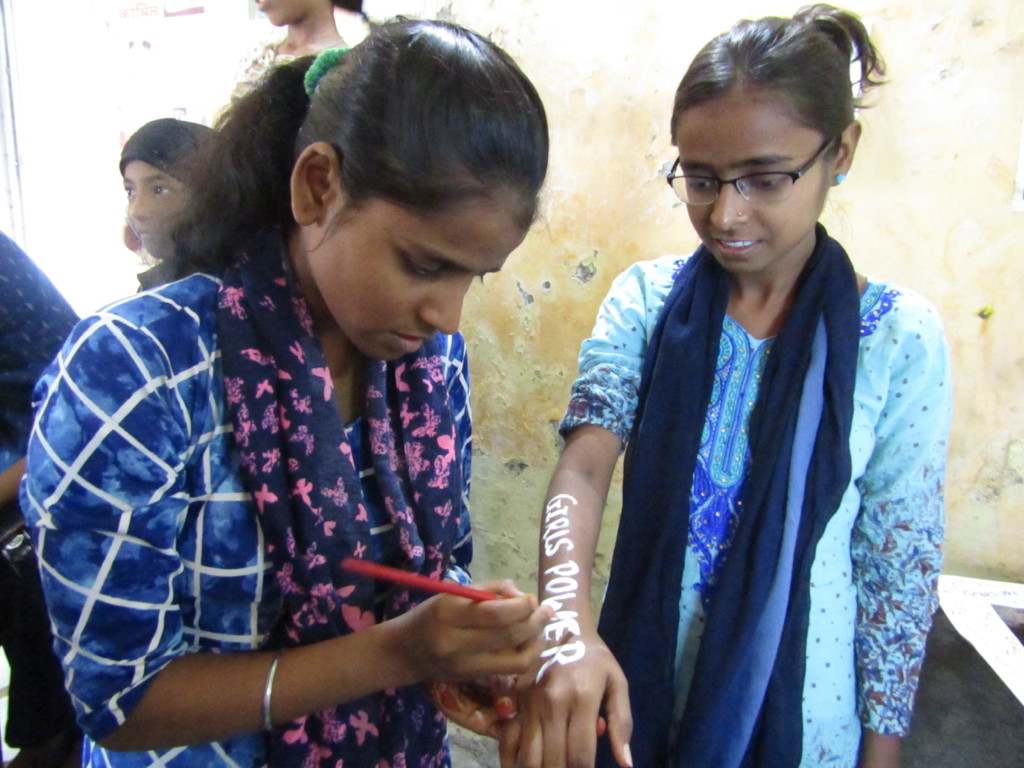 Once again thanks for supporting out programmes with much needed donations. We request you continue the same although the money will reach us later than before due to some bureaucratic issues.

Our past students Durga and Sneha have completed undergraduate studies and from their first salaries they donated a sum of Rs 10,000/- (USD 145.00 approx.) to Vacha. We are delighted by their appreciation of Vacha’s programme of social education from age 10. These are the girls who had to face the community wrath in their attempts to make their basti (‘slum’) safe for girls and women. It was the photograph they took of boys hanging out at an unofficial bike park space near community toilets for women and passing lewd remarks to girls on way to relieve themselves. Very few homes have managed some sort of private toilet in a basti. Finally the bike park was also removed from that space. One positive support they had was from their father who stood by them. This does not usually happen. Parents can be quite conservative coming as they do from some of the most socioeconomically backward areas in the country.

Durga and Sneha are lucky as they had due documents to prove their occupancy. As demolitions of the basti started their family got a 300 sq. ft. apartment in a proper building of bricks and cement concrete. The space is, of course, too small but it is better than where they had lived. Plus it has a toilet inside and bathroom so they are able to live with dignity.

One of our brightest girls Sabah  has also completed college and is employed by Shadhika, one of our supporting foundations, itself. Sabah had also started with Vacha’s programme for girls’ empowerment from age ten. Sabah’s leadership traits were encouraged by Vacha and she gained from our leadership training. She had even gone to represent Vacha to Delhi in a major programme chaperoned by a senior Vacha staff member.

We wish all the three girls, now young women, great success in life. 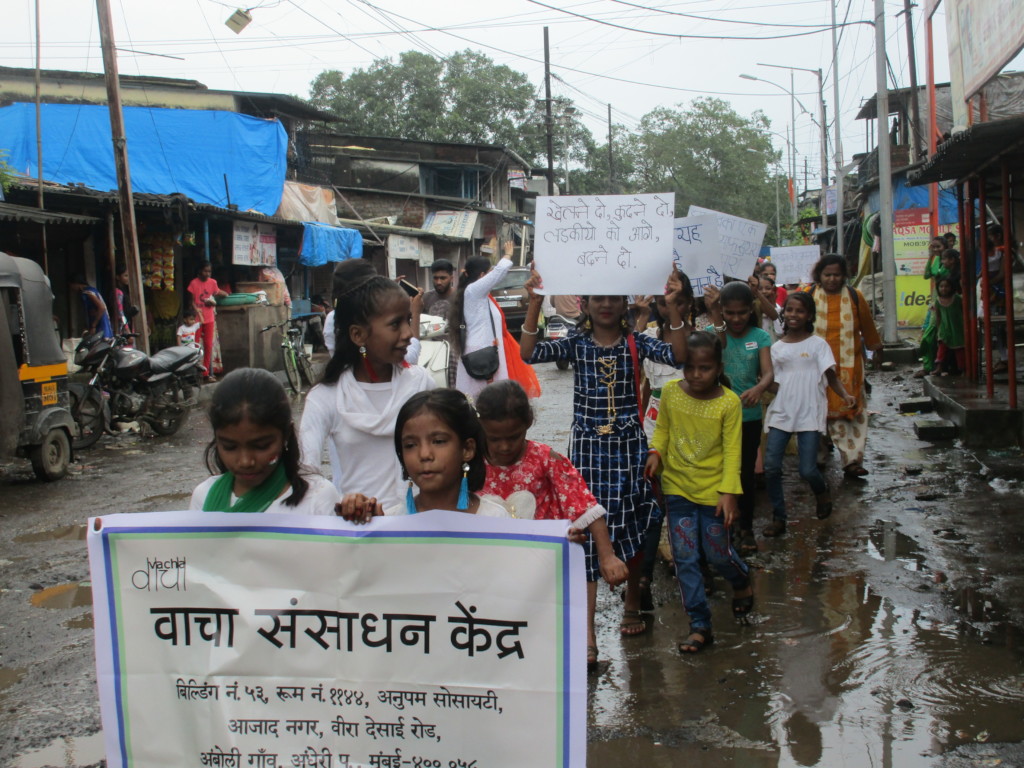 A rally for better community toilets

As you know August 15 is the Indian Independence Day. Our project participants celebrate it very enthusiastically. They publish their own news letter, now in 14 communities and have lots of cultural activities. Sometimes, if open space is not available on all days they celebrate on a Sunday before the Independence Day. Events on major days give youth from deprived communities opportunities to express themselves through writing, posters, songs and street theatre.

There was an additional celebration this year that we are all very excited about. We have established a Vacha library in a former village in Thane district where poor residents and migrant labour from most backward districts in India live. The response is amazing. Within a month 150 kids have become members and more have lined up to enrol. It is the first time that they get to read something besides their text books that they get free. Many are beginning to get interested in reading newspapers. This year there were competitions and reading outs in and around the Independence Day. We felt very good that children in this very poor areas have welcomes a library at a time when many libraries and bookshops are closing down in the world. We hope to start another in an area where all homes are made from tin sheets. The programme is coordinated from our central office.

Thanks for your kind support. Donations from many of you made it possible for us to get a small place, at the devastating Mumbai prices, from where we coordinate this and other activities. 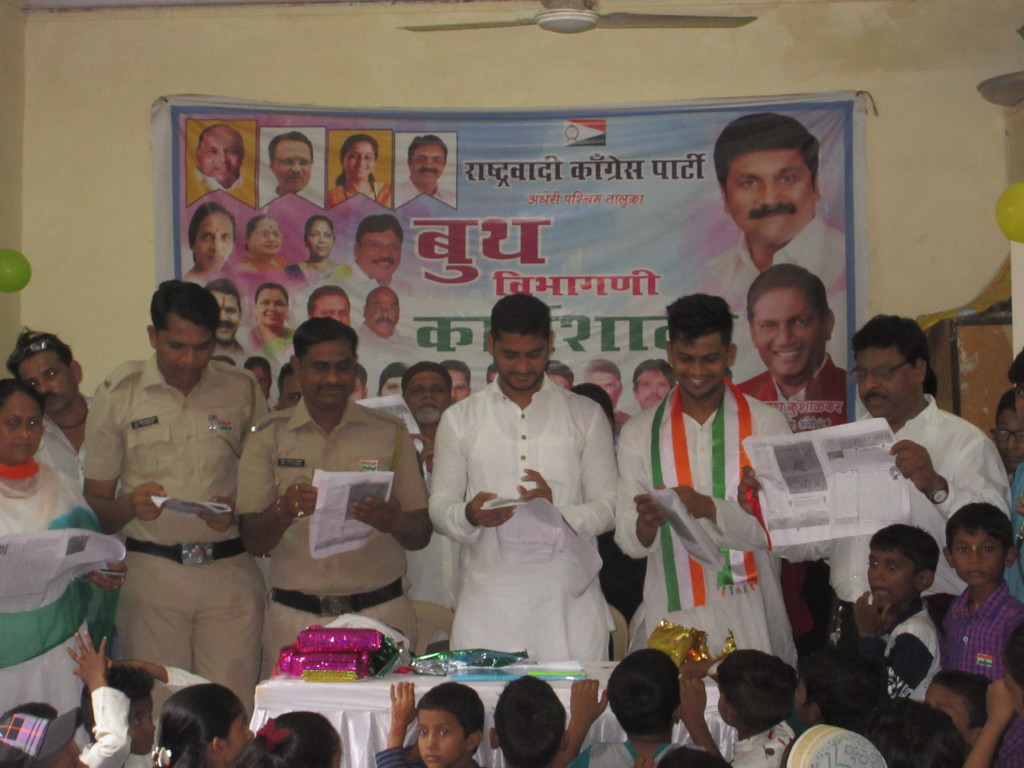 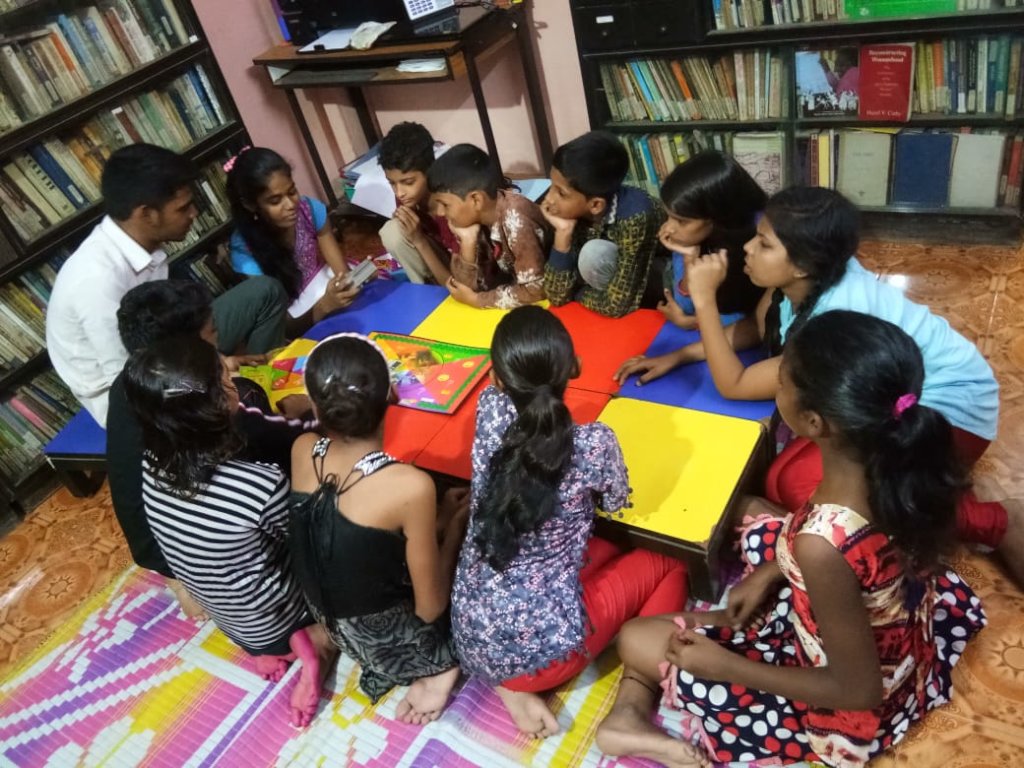 Reading aloud at the library 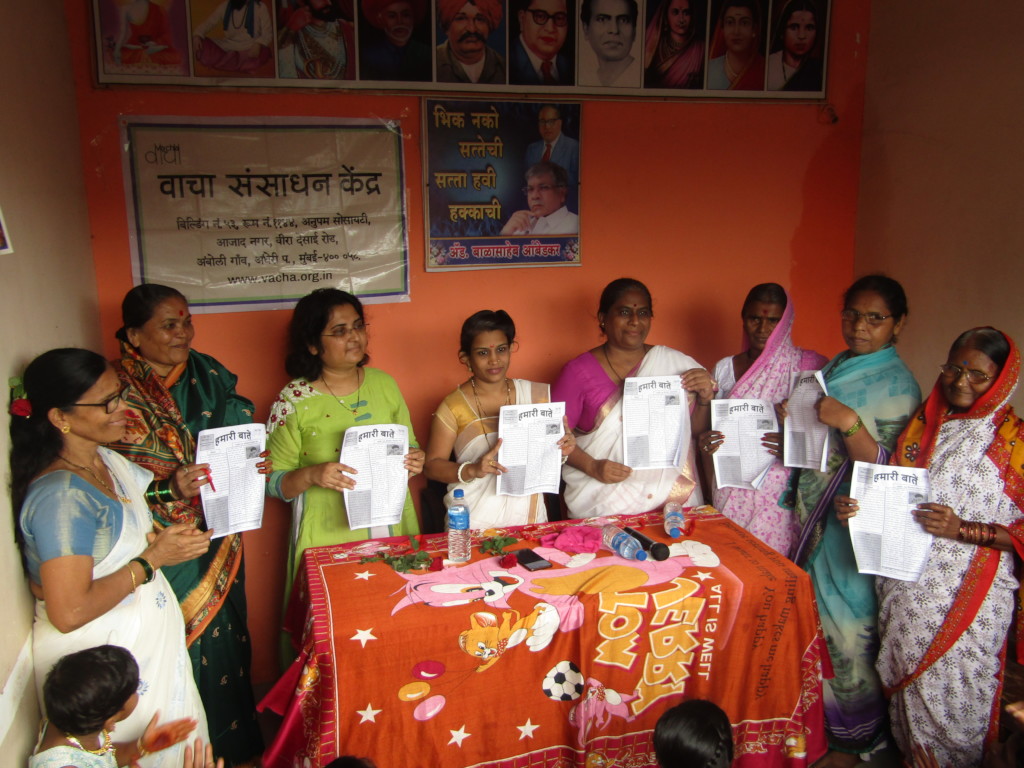 Sharing with the community 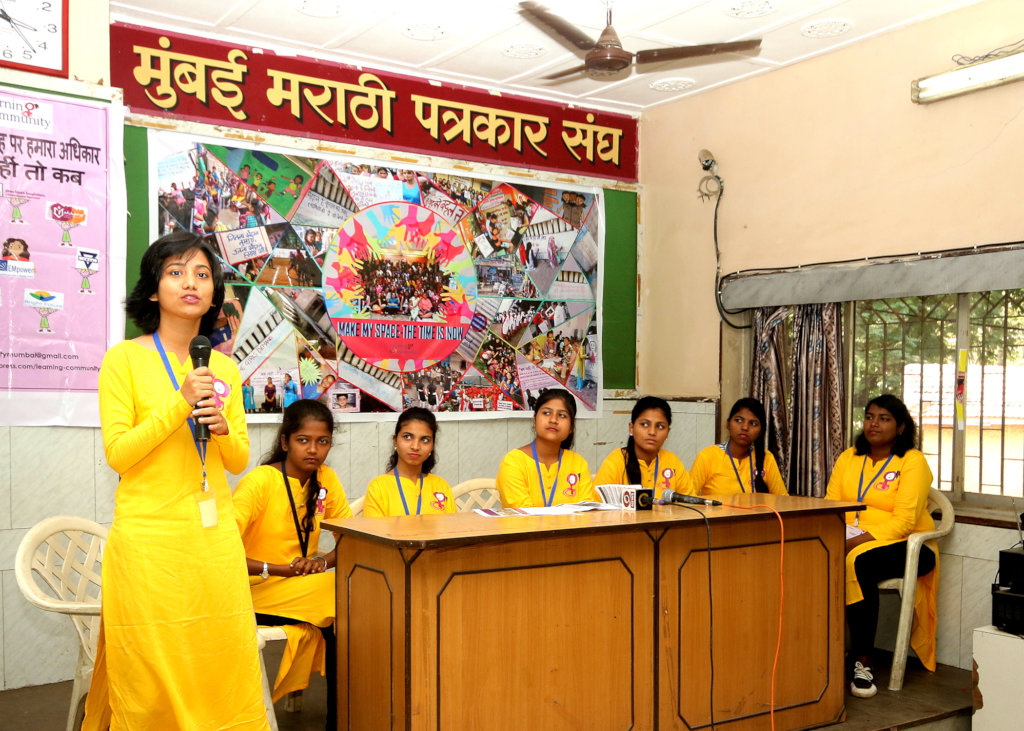 It gives Team Vacha great pleasure to share pictures from a training centre cum coordination office with you. Several of you have contributed for getting a small place of its own after 30 years of existence. Space in Mumbai is highly expensive and rents are sky high and never is the tenancy on long term basis now. A permanent space, however small, was needed for Vacha to survive. We had tried very hard to collect funds to buy space and had done locally. However, in the last phase, it was through contributions from GlobalGiving platform that made it possible to get this place. So a very big Thank You to all of you and to GlobalGiving. I am sharing a couple of pictures from a girls’ training. We will be putting up pictures from other parts of this 400 sq. ft. Place as they become more functional.

Vacha coordinates a programme of Learning Community of Girls supported by and planned with EMpower Foundation. Seven NGOs working in poor neighbourhoods participate in a project of empowering girls through leadership skills and skills in locating issues affecting their lives, planning, budget making, monitoring etc. and encourage them to own and execute the project themselves. They have carried out such projects at local level and share strategies and outcomes. This year they conducted a survey of girls experiences on issues of mobility i.e. access to public playgrounds, Public toilets and Public stands for newspaper reading, a special Mumbai feature in poor areas. The findings revealed threats and demeaning experiences. The survey was titled The Time Is Now with demands through advocacy. Girls from all centres including Vacha called a press conference to release the survey report and a charter of demands on April 12 at a Press Club. The press conference was covered by 10 daily newspapers and 3 TV channels. It is going to various authorities.

We continue to work with adolescent girls from deprived communities and thanks again for your regular support. Do visit our website www.vacha.org.in from time to time.

Thanks again and best wishes, 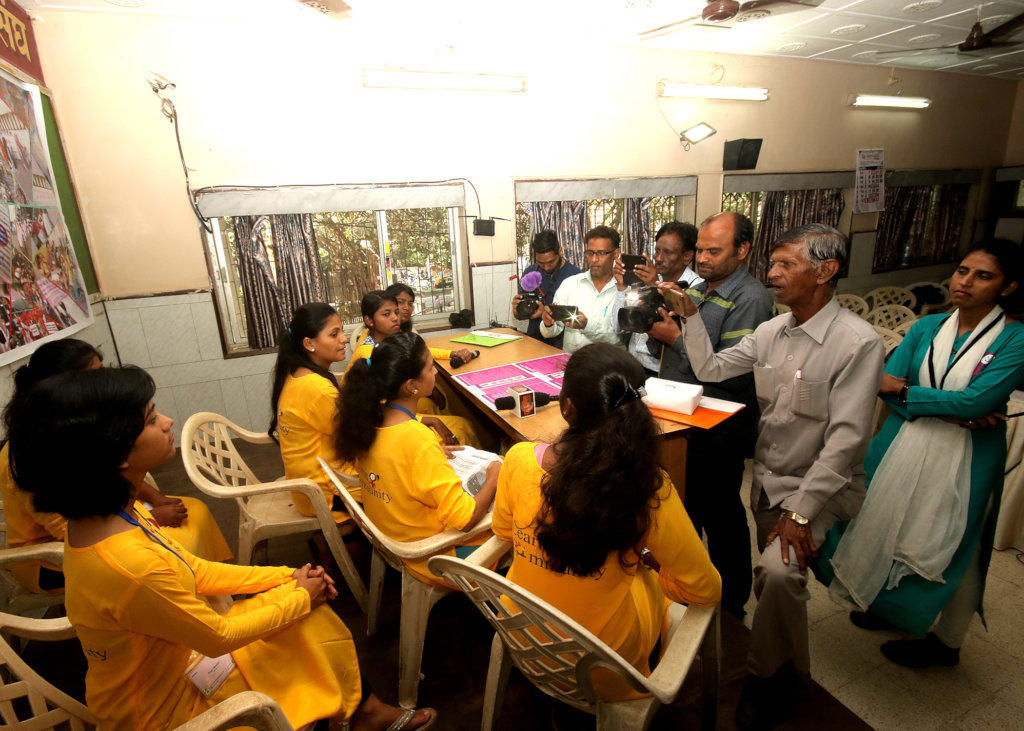 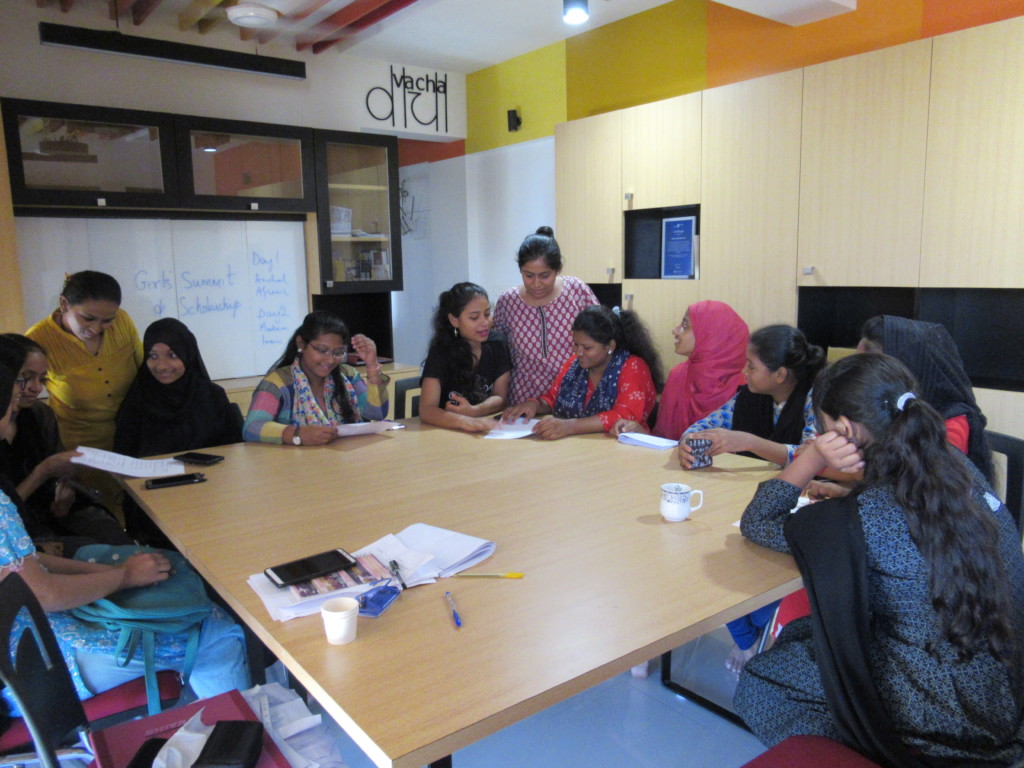 Girls at the new training space 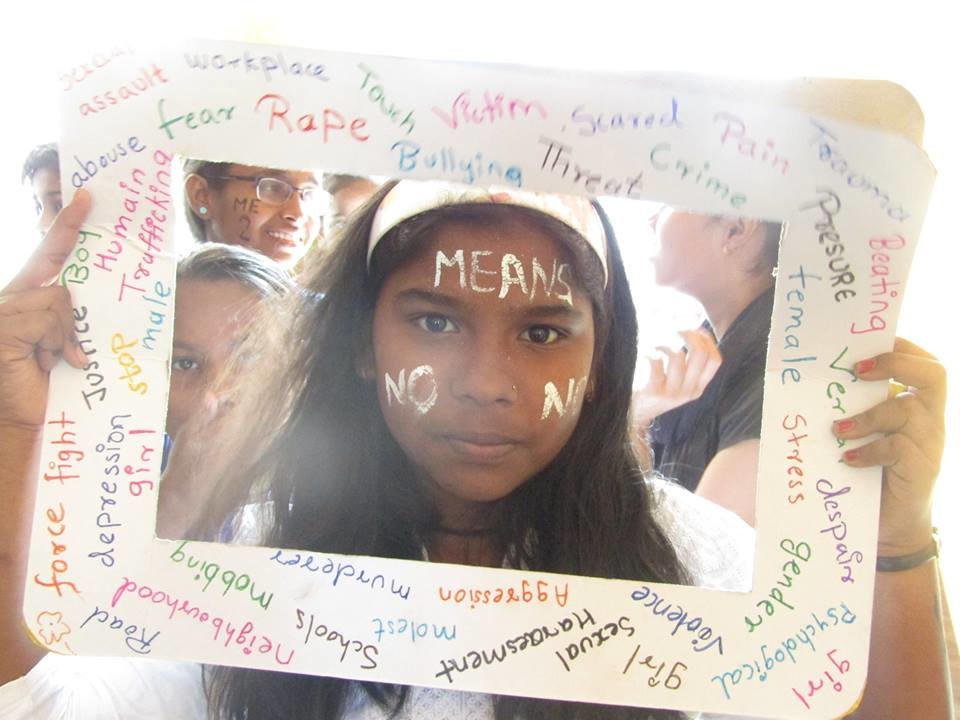 For many of us 16 days of action on elimination of violence against women is a very important time in the year. It starts on Nov. 25, the international day for elimination of violence against women and ends with Dec. 10, the International Human Rights Day.Many women’s groups conduct a series of programmes like rallies, film shows, public meetings etc. Vacha has some special activity in each of the 12 to 15 poor communities where it is active with a girls’ empowerment programme. We conducted activities like rallies, photo exhibitions, fairs, street plays, film screenings, signature campaigns, online poetry and storytelling and other awareness generation activities. Various themes covered by these activities were sexual harassment, unsafe spaces, issue of community toilets, and gender and gender-based violence. These events witnessed an overall participation from more than 800 community girls, and it was attended by more than 3000 people which included community residents, people from nearby schools and colleges, local leaders, police, corporates, other CBO's and social workers. One such event in Bharat Nagar and Sant Gnyanaeshwar Nagar was conducted in collaboration with ActionAid, India.

About 25 youth from one of our communities took an initiative and organized a film screening on the theme of violence against women in Malad, Mumbai. They invited Police and special cell (for women) personnel for the event. It was attended by nearly 350 community people and the local leader. After the screening it showed that many women became aware regarding domestic violence and where can they get the help from, through Q & A session. The unique part about this film screening was that it was scheduled at night and many women were present for the screening. In a community where girls and women are not allowed to go out after dark, this event was a progressive step and broke the barrier of restricting women and girls from going outside at night. Also, our youth distributed pamphlets in the community to spread awareness on the topic. They screened an episode of 'Satyamev Jayate' which was on the topic of violence. The response received to this event was rather overwhelming and very positive.

We feel happy that the youth –the girls and the boys- themselves now take initiative and organize meetings using resources like film screenings, leaflet distribution, holding public meetings and debates and photo exhibitions because that means a pro active leadership in emerging in poor communities, the so called slums. 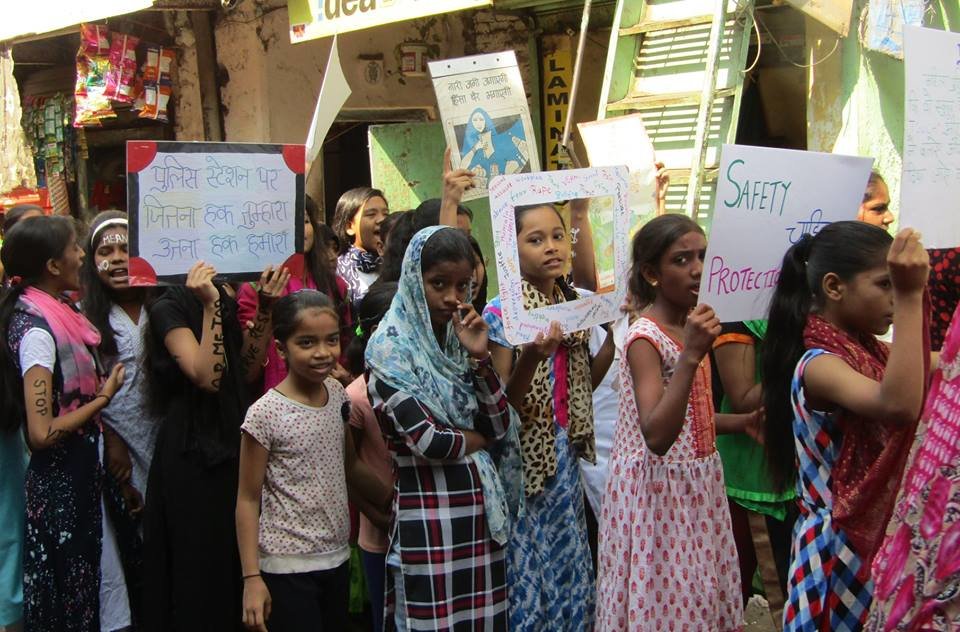 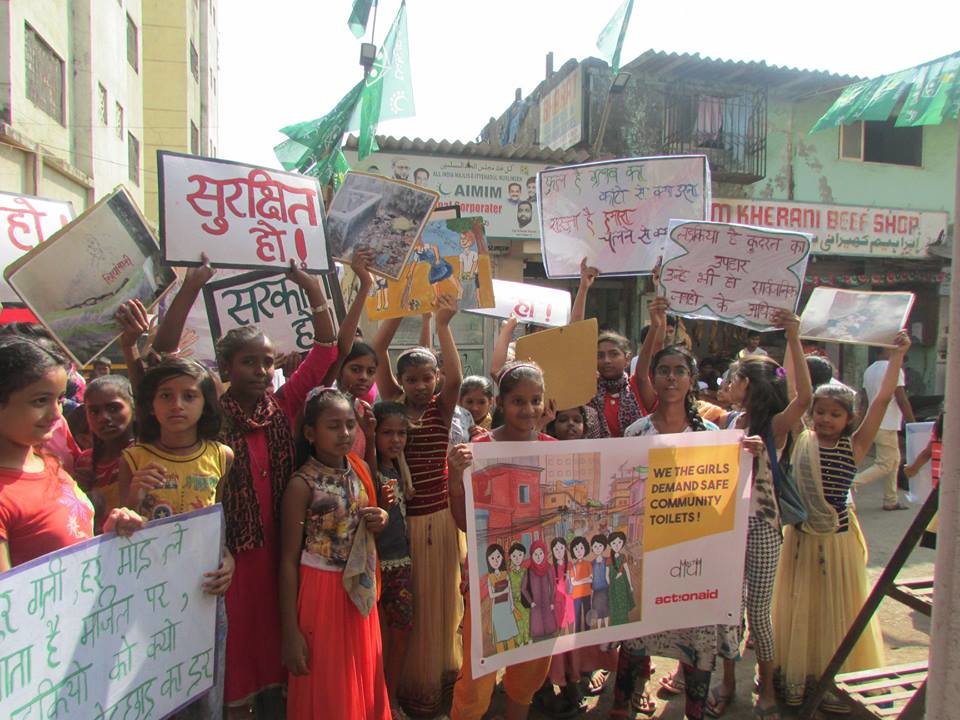 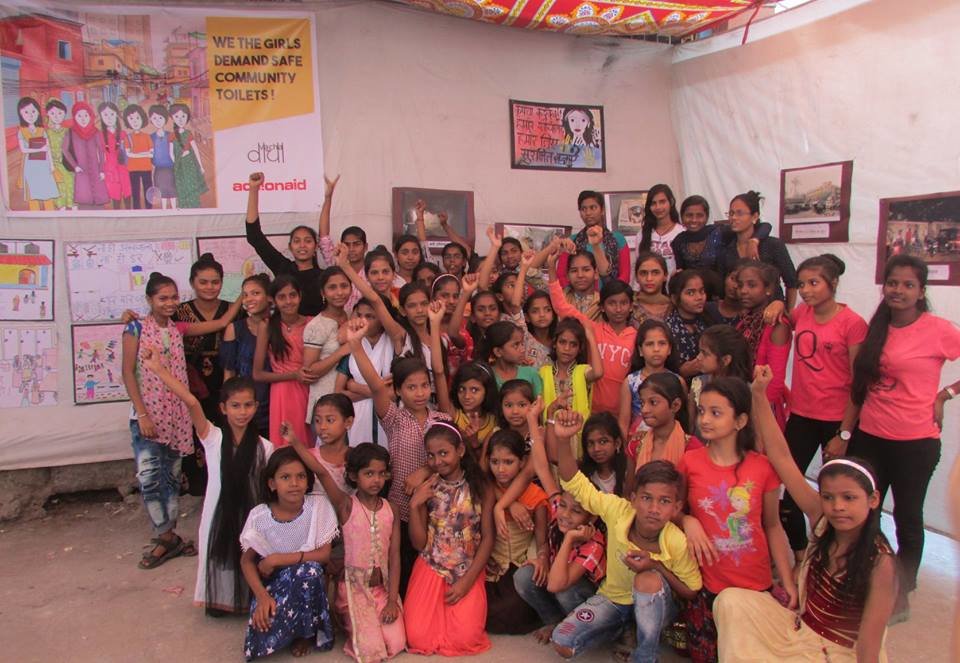 Donating through GlobalGiving is safe, secure, and easy with many payment options to choose from. View other ways to donate
Vacha Charitable Trust has earned this recognition on GlobalGiving:

GlobalGiving
Guarantee
Donate https://www.globalgiving.org/dy/cart/view/gg.html?cmd=addItem&projid=22899&rf=microdata&frequency=ONCE&amount=25
Please Note
WARNING: Javascript is currently disabled or is not available in your browser. GlobalGiving makes extensive use of Javascript and will not function properly with Javascript disabled. Please enable Javascript and refresh this page.