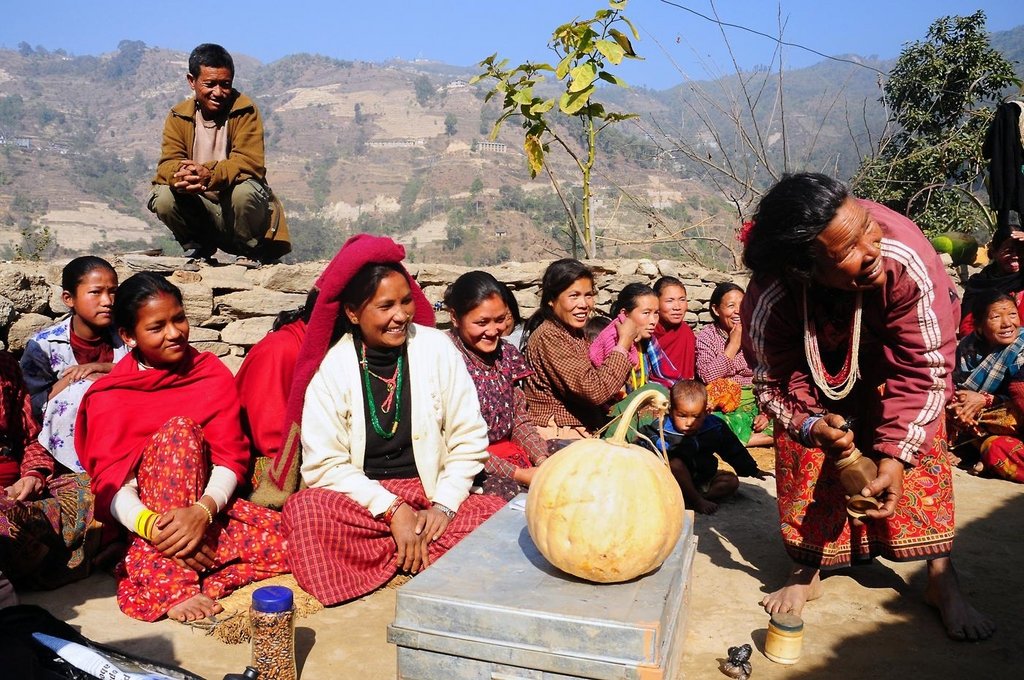 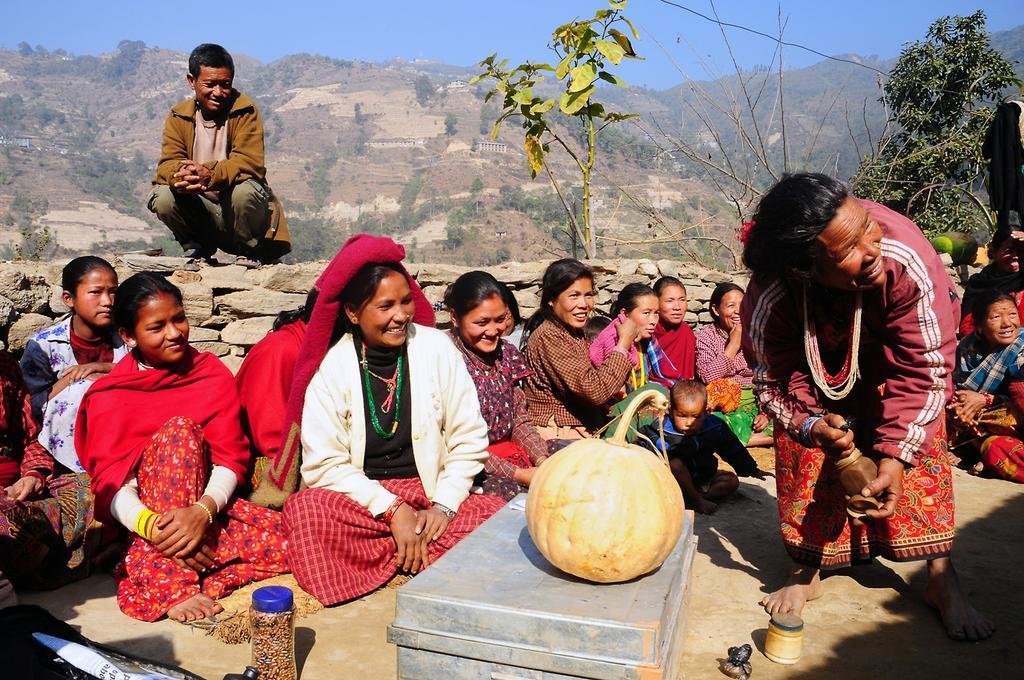 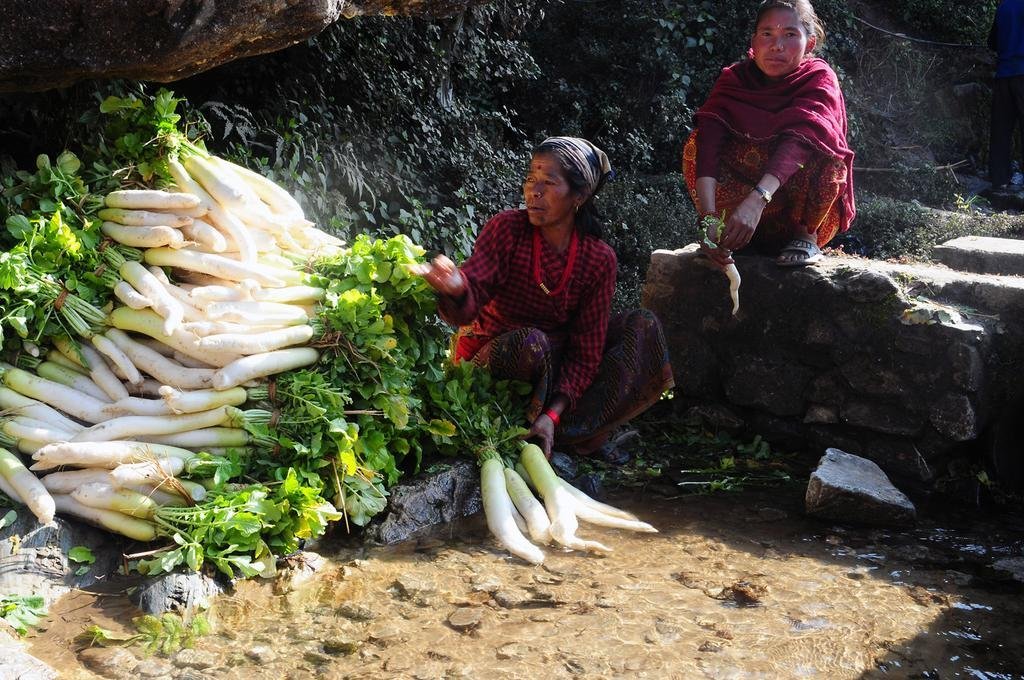 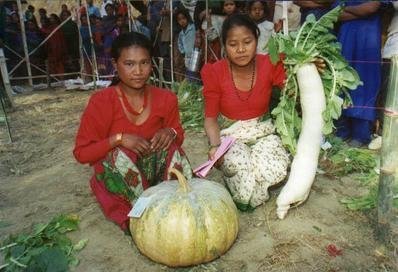 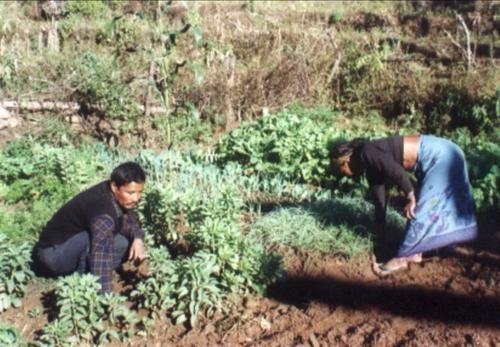 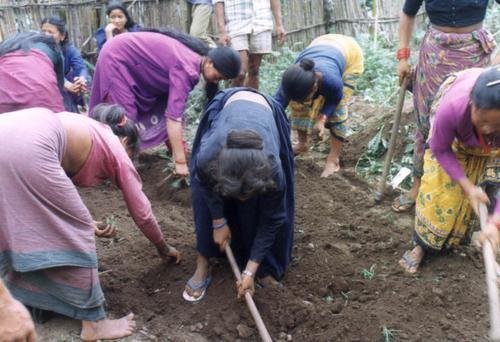 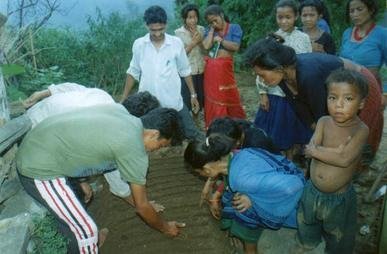 Thank you for your support for this project. ASHA has received funding for this project, but their work still continues. If you would like to keep up with their activities please check out http://globalgiving.org/projects/train-women-farmers-in-organic-agriculture-nepal project 6056.

In the past year, you have helped ASHA accomplish the following: • 202 women received training in group fund management, sustainable agriculture, seed saving and compost making. • 34 women were trained in permaculture design. • Out of the 25 women trained in goat raising, 15 women are keeping the goats and 5 are using the goats as a major source of income • 126 women were trained in making compost • Women’s status has been improved with the freedom to attend group meetings and in the family through family member support in activities •Women have achieved empowerment: o Economically, through the ability to save money o Women can buy their children clothes and food, pay for tuition fees and have the ability to lend money to those in need o Through community participation o Through continuous support, monitoring and follow-up by project staff • Women have gained life-skills and knowledge through trainings, observation visits and exposure visits. • Women have gained knowledge and skills that help them to be healthy, generate alternative income and perform sustainable agricultural practices. • Improved group leadership and dynamics • Improved sanitation • Involvement of the women groups in various committees o Four women are working as Female Community Health Volunteers o Women group members are involved in water supply management and school management committees • Successfully expanded to 5 new women’s groups (instead of 2 as anticipated) • Women are beginning to cultivate grass in their waste lands, construct runoff channels in terraces and have a mixed vegetable production system due to their visit to the organic farm. • Women’s interest has increased since the organic vegetable fair which has inspired them to market their organic goods.

Together you have strengthened communities of women to develop their skills and better equip themselves with the tools and knowledge to empower themselves, increase their families’ income, and protect their natural resources. Thank you. 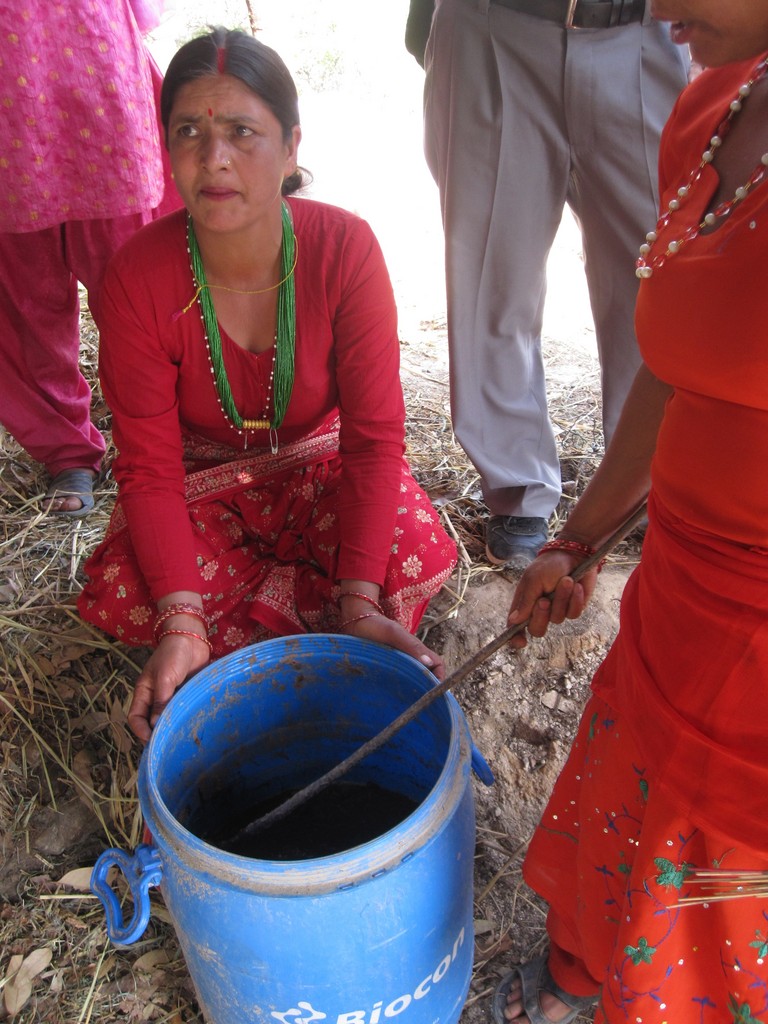 Organic pesticide made from urine and herbs

Bill Brower is a Field Program Officer with GlobalGiving who is visiting our partners’ projects throughout South and Southeast Asia. On April 24th he visited communities involved in ASHA Nepal’s sustainable agriculture projects. His “Postcard” from the visit:

The overarching goal for ASHA Nepal’s projects, including the sustainable agriculture training, is the empowerment of women in families and communities. If the mindset of the daughters of the women involved in the program can be taken as any indication, ASHA Nepal seems to be succeeding. I met with two sets of women in neighboring communities, representatives of the five women groups in the Okharpauwa area. At each I came across a young woman who seemed unlikely to put up with being pushed around.

Barsha Phuyal, an eighth grader who heads up an environment and health club at her school (see her describe it in the link below), proudly told me, in impressively good English, that she wanted to be a lawyer when she grows up. I asked her why. She replied, “There are so many in this country who are in darkness, and I want to help bring them light. I want to change my country,” with a sincerity and determination in her eye that made me think she just might.

At the end of the meeting with the second group a kilometer up the road, women of the Tamang ethnic group speaking a different language than their neighbors, Nabina Phuyal (actually from the first community but of no relation to Barsha) read a poem she’d written in Nepali about the importance of women in society and how women need to fight for their equal rights.

The husbands, initially skeptical, are also coming around to the benefits of the women’s group and their pursuit of organic agriculture and other economic activities. According to the women and verified by one of the husbands, at first the husbands thought the women were just pretending to be busy by going to the meetings. But once they saw money coming in from what their wives were doing, they were OK with it.

In neither group were the women using 100% organic practices, but it sounded like they were transitioning in that direction. In the first group, one woman estimated that 25% of the women were mostly organic, using chemical inputs on a small portion of crops that they wanted to sell in the normal market (where appearance is king). In the other, the chairwoman of the group said all use some organic methods but none of the women use no chemical fertilizer or pesticide. She said synthetic fertilizer use had been cut about 50%. The group said the primary reason they adopted organic practices was the health benefits associated with fewer chemicals. They also mentioned that it was better for the soil and reducing chemical usage saved them money.

We visited several of the women’s homes and they showed off their organic practices. All of the ones I saw were collecting urine from their livestock for fertilizer and pesticide, collecting and saving seeds and collecting wastewater. I also saw one family composting. The women in the attached picture are showing us the pesticide they make from urine and herbs—many of which were growing just meters away. They said this pesticide was more useful than the chemical variety since it didn’t discolor their cauliflower and other crops. The tank shown is enough for 1 hectare, so three families share in its production and use.

ASHA Nepal is a small organization but seems to be having a big impact in the lives of the communities they’re involved in. Thank you for supporting their efforts! 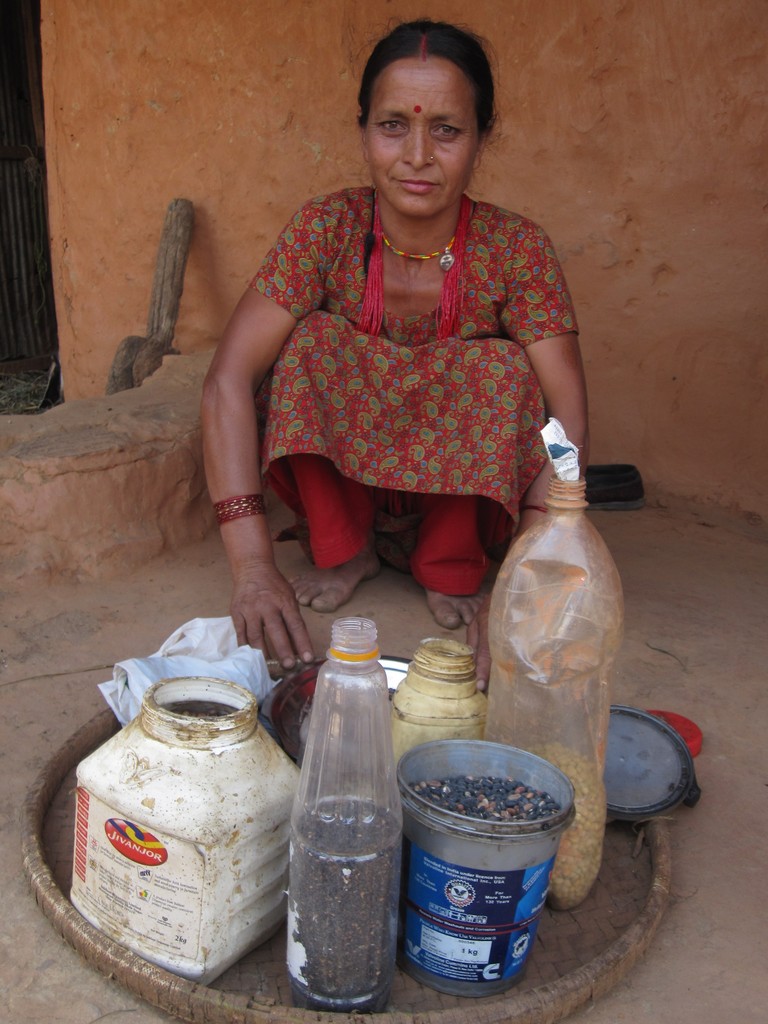 Collecting seeds to save money 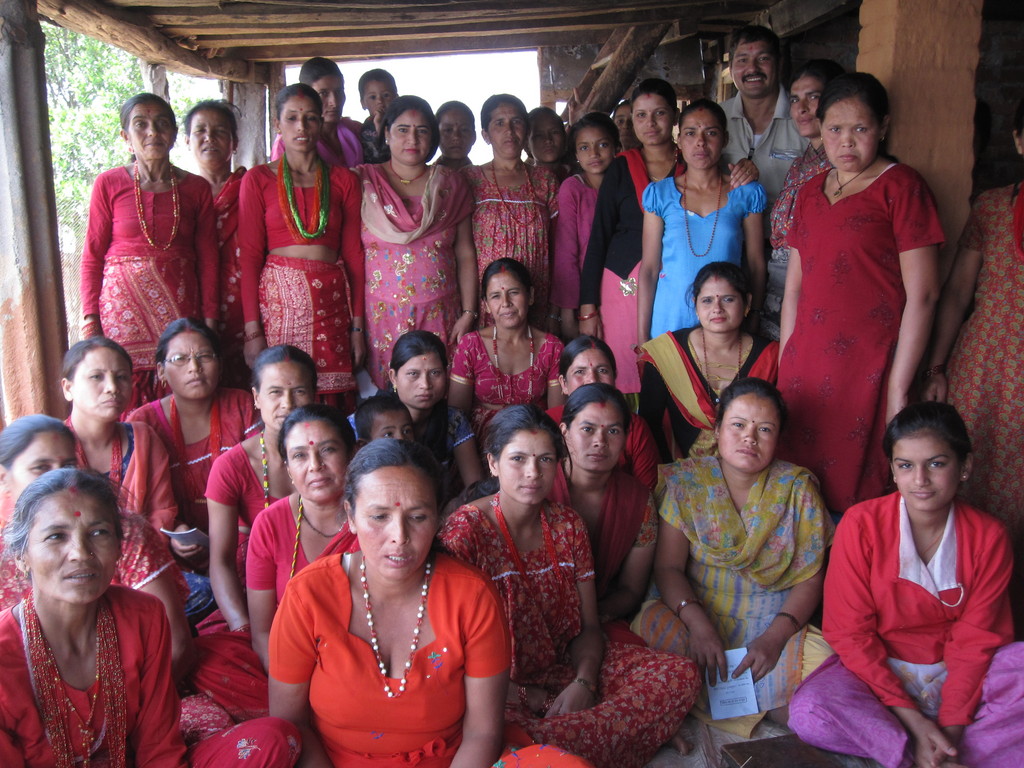 Representatives of the women's groups

On Tuesday, March 16, all donations up to $1,000 per donor, per project will be matched. Donate on Tuesday, March 16, 2010, and maximize your gift. Despite ongoing challenges in Nepal, the cooperative that ASHA is working with has seen some impressive results in the past year. It is quite timely that with International Women's Day this past Monday, we are able to share with you all the great work going on at ASHA and thank you for your continued support. In the past year ASHA had a goal of establishing 2 new women’s groups. But at a needs-assessment in early 2009, ASHA identified the potential for 5 new groups. After a series of community meetings 90 women began to form the 5 groups. ASHA provided workshops on how to form the groups and focused on fund management, as a key component is savings. The women were also collectively trained on sustainable agriculture, making compost and seed saving, all of which are key to improving yields and, in turn, better incomes. In groups that have been active for several years, ASHA reports that the women feel that their status in their family and community has been improved. Where once there was resistance to women being part of a group, families have begun to be more supportive of their activities. This is in large part because women have achieved more empowerment at several levels. Financially they have a bit more income, which eases the situation at home, and group members have often developed the habit to save some money each month. The money allows women to be able to buy food and clothing for their children and send them to school. In some cases they are even able to lend to neighbors in need which improves community participation.

Topics included techniques of planting and harvesting vegetables and crops. ASHA also took the opportunity to distribute a variety of seeds to the participants. Staff provided, and continues to provide, regular technical assistance to the groups, specifically to support seed-saving methods.

36 women are now growing crops such as pumpkin, beans, cauliflower, tomato, wheat millet, chilies, cabbage, radish, and carrot. Thanks to your support! And with more support, ASHA can reach even more women, and more families in this region of Nepal.

Our latest update from ASHA expands on their work written in previous updates. We are happy to report that there are now 5 women’s groups being helped with your support. They hold monthly meetings to discuss issues of money management and other important issues pertaining to health, social matters, and group concerns.

ASHA staff provides valuable assistance in helping groups to organize and moderate the meetings. The staff has also provides ongoing technical assistance in addition to monitoring the group’s activities (such as seed-saving, planting, preparation of manures, etc.) The groups have improved their collective knowledge and skills regarding conservation, utilization, storage, and management of the seeds. Their capacity for group management and teamwork has been nothing short of impressive. And in a true democratic spirit, the groups have also reformed as part of a yearly process to provide leadership opportunities for all participants.

The monthly collection from group members for the group savings fund, which takes place during the meetings, has continued to be successful tool for savings. One group recently decided to construct a community center that would work double-duty as a place for group meetings and as a collection center to store their produce. With their group’s saving fund, the group members were able to construct 2-room building. The women collected locally available materials such as stone sand, stone, wood, etc. ASHA assisted minimally by providing roofing materials.

With your support, these women’s groups have been able to carry out activities that have enhanced their knowledge and skills and empowered them economically. The women have also been empowered in other ways. As group members, they have reported that they are more valued in the community and their status has improved within the family. With their regular savings, they themselves can make decisions for buying clothes, food, children’s school fees, and other family necessities.

Thanks to 76 donors like you, a total of $6,636 was raised for this project on GlobalGiving. Combined with other sources of funding, this project raised enough money to fund the outlined activities and is no longer accepting donations.
You last donated to this project on

Find another project in Nepal or in Climate Action that needs your help.
Find a Project

GlobalGiving
Guarantee
Donate https://www.globalgiving.org/dy/cart/view/gg.html?cmd=addItem&projid=1601&rf=microdata&frequency=ONCE&amount=25
Please Note
WARNING: Javascript is currently disabled or is not available in your browser. GlobalGiving makes extensive use of Javascript and will not function properly with Javascript disabled. Please enable Javascript and refresh this page.