Pangolins: the world's most trafficked mammal. 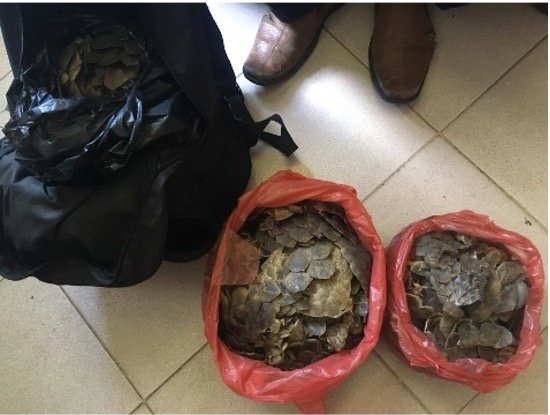 Bags of pangolin scales confiscated by the team.

Have you heard of pangolins? Sometimes known as scaly anteaters, these reptilian-looking mammals are found in Asia and Africa and are unfortunately often hunted and trafficked for the keratin scales which cover their bodies.

The Sunda pangolin species is found in Sumatra and, like all the other species of pangolin, is nocturnal and feeds on ants and termites. Most pangolins captured from the wild, no matter where they are found, end up in China and Vietnam, where their scales are used as an ingredient in traditional medicine.

To prevent the continuing catastrophic decline in pangolins in the wild, it is vital that conservationists and law enforcement agencies gather information about trafficking routes and the people involved in this wildlife crime. Our team in Sumatra recently collaborated with local authorities to seize two suspects and the evidence of their involvement in trafficking pangolins - nine kilograms of scales.

Tragically, it is too late to save the pangolins these scales came from, but by gaining information from the suspects and continuing to keep a close eye on potential trafficking hotspots, our team can be part of the ongoing effort to keep pangolins safe in the wild.

Thank you for supporting this work.