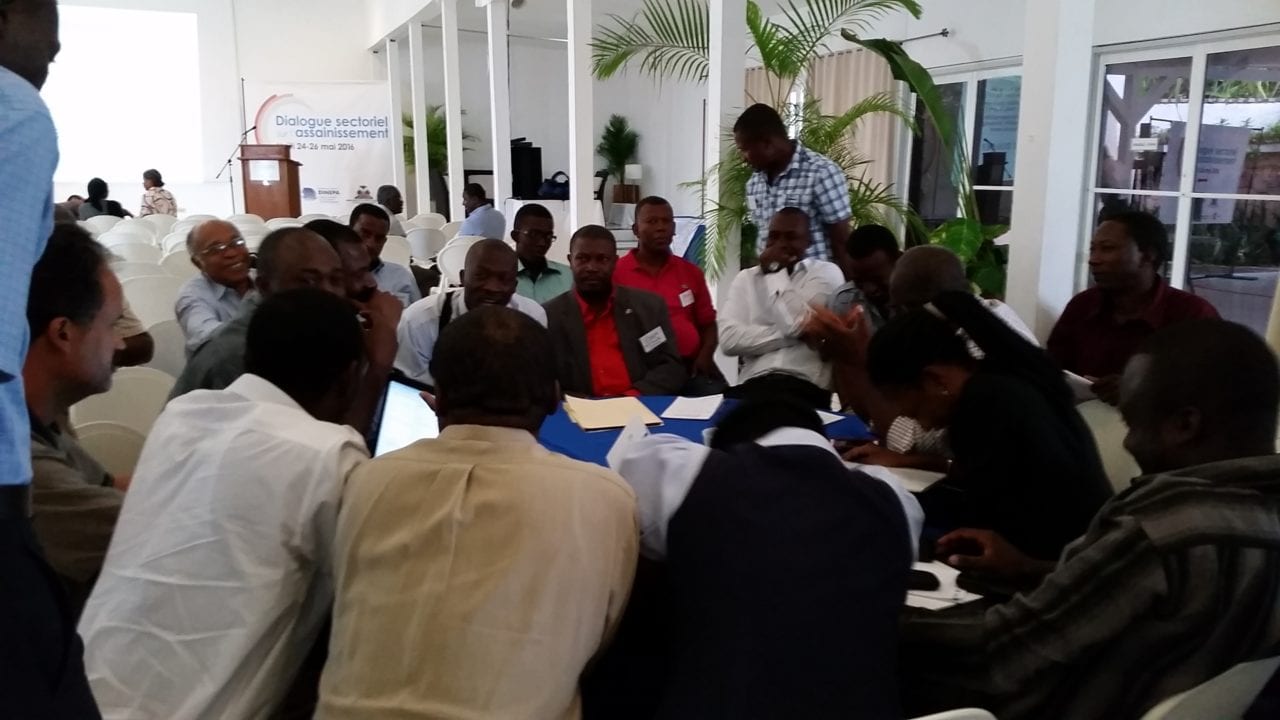 Although nearly 75% of Haitians lack access to toilets, it’s not for lack of effort or attention by the Haitian government. Despite the fact that the sanitation authority (known by its French acronym, DINEPA) is relatively new, formed just prior to the earthquake in 2009, they have worked tirelessly to develop a National Sanitation Strategy in response to inadequate sanitation access and Haiti’s devastating cholera outbreak that began in 2011.

Haiti’s sanitation challenge has been in the implementation of the strategy, and sadly 5 years into the cholera outbreak hundreds of Haitians continue to die from the disease each year. To begin making inroads against this challenge, in May 2016 DINEPA and the World Bank convened over 100 sanitation experts and practitioners from both Haiti and abroad in Port-au-Prince to work on an actionable implementation plan at a four day conference, the “Dialogue Sectoriel de l’Assainissement 2016”, Haiti’s first ever national sanitation conference organized by the Haitian government.

SOIL was honored to be invited to play a large role in the conference, both by attending and presenting during multiple sessions. SOIL’s Director of Sanitation in North Haiti presented EkoLakay, SOIL’s household toilet service. The following day SOIL’s Director of Composting and Agriculture presented about SOIL’s waste treatment process, showcasing SOIL’s demonstrated ability to treat waste to safely destroy pathogens, and also to create a valuable and highly desired end-product – SOIL’s Konpos Lakay compost.

During breakout discussions, groups cited EkoLakay as the most appropriate sanitation solution for dense urban areas. In addition, leadership from DINEPA spoke many times about their excitement about composting and the valorization of waste, highlighting their upcoming collaboration with SOIL to compost DINEPA’s waste from the waste stabilization ponds.

This wasn’t only a chance to share SOIL’s work with an influential audience; it was also a chance to learn from other participants at the conference. We were particularly excited to have some extended time with a colleague from WSUP (Water and Sanitation for the Urban Poor), an organization that has been running a business called Clean Team, a container-based sanitation service in Ghana. SOIL and Clean Team are often in close contact to share ideas and best practices, but getting to meet and discuss challenges in person was a rare treat. Our team was especially excited to see the sun roof on the Clean Team collection vehicles, so we can expect some improvements to SOIL’s fleet in the near future!

The World Bank Special Envoy in Haiti remarked  “Improving sanitation is everybody’s business… We cannot ignore the possibility of saving lives by improving access to sanitation and supporting this new national roadmap” (“Building Toilets And Changing Behaviors Can Save Lives in Haiti,” The World Bank).  We are grateful for the chance to share SOIL’s work and contribute to collaborative solutions for Haiti’s sanitation crisis.