Container Based Sanitation and Human Rights 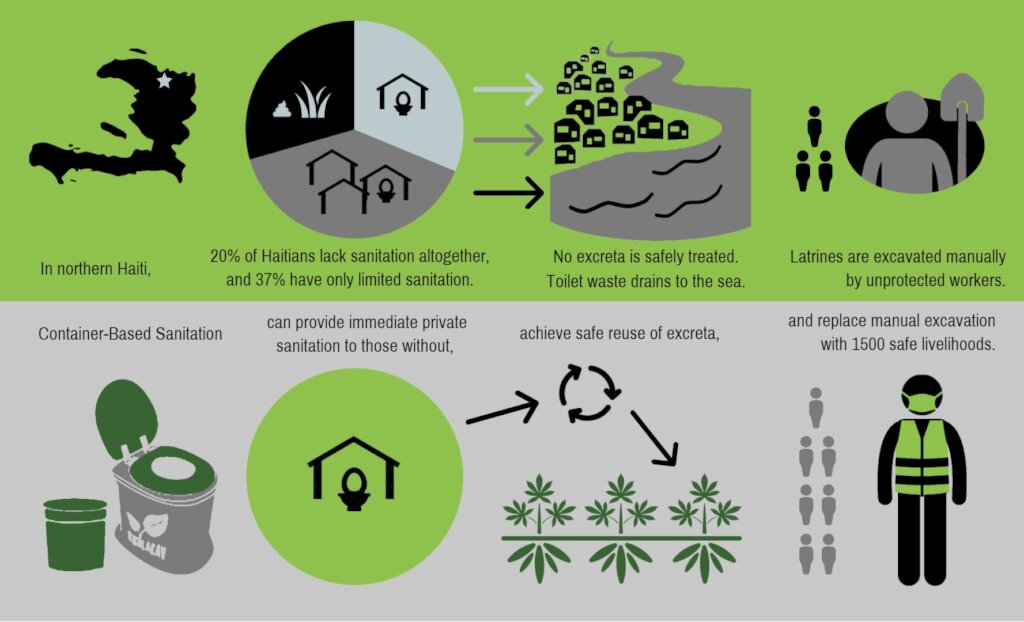 At SOIL, our strategic objectives are informed by careful research and data. We are also committed  to understanding the human rights implications of the work we do. We are pleased to share a recent publication, in partnership with researchers at Oregon State University and the University of Oregon, and published in H2Open Journal, that explores the potential for container-based sanitation (CBS) as a component of Citywide Inclusive Sanitation (CWIS) in densely populated, low-resource environments to safely meet sanitation needs and integrate protective mechanisms for sanitation systems and workers.

Health, sanitation, and livelihoods are interrelated human rights and essential components of community wellbeing. In Haiti, 19% of urban households lack improved sanitation access and the urban latrines that do exist need to be excavated manually and without regulatory protections. Unregulated waste removal and disposal is not only a threat to community health and safe drinking water, it also creates a stigmatized class of sanitation workers, the bayakou – independent manual latrine excavators who are often subject to public abuse. The bayakou perform their work submerged in human excreta and chemical solvents and without equipment to protect them against exposure, disease, or injury. These conditions violate the right of these individuals to be free from inhuman and degrading treatment and undermine the right to safe working conditions protected by the Universal Declaration of Human Rights.

The study, “Container-based sanitation in urban Haiti: how can it improve human rights as a component of citywide inclusive sanitation?,” addresses two main research questions:

The study uses a mixed methodology approach, deriving qualitative and quantitative data from 633 interviews with active and former users of SOIL’s EkoLakay household CBS service in Cap Haïtien and EkoLakay subscriber records. A profile of the user base was created, including household demographics, payment patterns, and sanitation access before and after (for former customers) subscribing to the service. Secondary data was also compiled and analyzed to determine the impacts of widespread CBS expansion in northern Haiti as compared to current emptying and dumping practices.

While political systems in Haiti and elsewhere lack the enforcement resources to protect independent workers like the bayakou, CBS services provide a structure compatible with safety monitoring and worker protection and therefore lead to higher quality livelihoods for employees. SOIL does not currently employ bayakou, but the expansion of CBS services would likely increase the overlap and potential to transition former bayakou into new, safer sanitation jobs.

The study provides insight into the potential for CBS to be used as a tool for achieving multiple sustainable development goals in other international communities that share similar challenges and opportunities to those observed in northern Haiti. CBS has the potential to strengthen sanitation systems, extending the human right of safe sanitation to the most vulnerable households while protecting the health and dignity of sanitation professionals like the bayakou.

You can read the full paper here.

Project Leader:
Eliza Parish
Sherburne, New York United States
$55,515 raised of $75,000 goal
You last donated to this project on
639 donations
$19,485 to go
* Amounts in US Dollars
Donate Now
Donate once
Donate monthly
$25
USD
Safely treat 100lbs of waste
›
$70
USD
Provide 2 toilets for families without them
›
$100
USD
Produce 65 lbs of compost
›
$275
USD
Provide a family with a toilet plus collection and waste treatment services for a year
›