A Karate Kid who Sings Beautifully 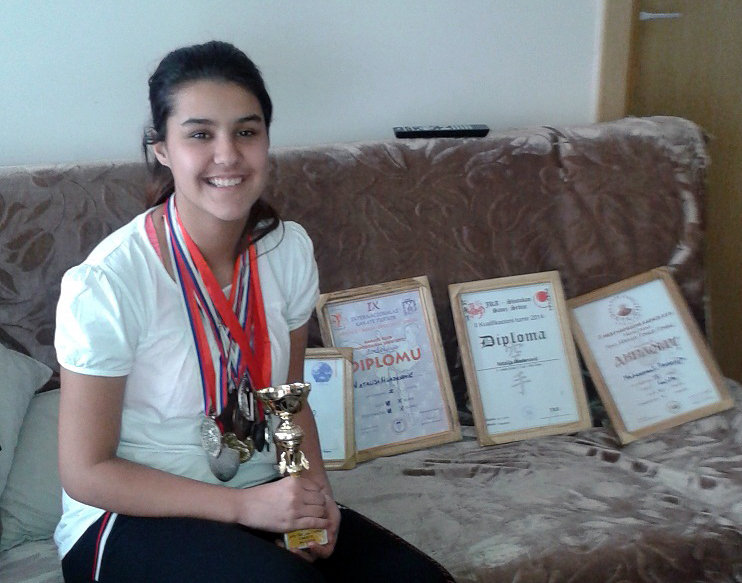 Natalija with her most treasured trophy

Natalija M., a thirteen year-old girl supported by a scholarship through GlobalGiving,  is a State Champion now! She owns a magnificent necklace of 20 medals won in karate competition and a trophy from the State Championship. As a karate blue-belt  holder, just a few days ago, she won the Gold Medal in Karate Championship of Serbia for girls. This medal is the most important one for her. Now she practices in hope of deserving a brown belt.
"My Coach says I'm already ready for the black belt. He wants me to become a member of the National Team and compete at the international competitions. I would’ve already had a black belt if I hadn’t stopped training at some point”, says Natalija. She started to practise karate in her early age, but she had to quit it, since her parents did not have money to pay for the practise.
"There were days when we had nothing to eat...," said Natalija's mother Marica with tears in her eyes.
Natalija is a pupil in the seventh grade of primary school. She is the youngest of four children of the family who fled from Djakovica in Kosovo in 1999. She was born in a collecitve centre for refugees in Raca, a small town in central Serbia. For twelve years of her life, one room in that camp was the home of the whole family. There she started her education, practicing karate and singing in a church choir. Tata Zoran proudly talks about his daughter’s gifts.
"Her Coach says that she is very talented, she is a good fighter. People in the church say her voice is the most beautiful one in a choir," said Zoran.
Last year, Natalija's parents got a small apartment in one of three social housing buildings built for refugee families in a suburb of Raca. "In this part of the town you can see a postman only once a week," explained Zoran. Although her new home is far away from the town, Natalija has no complaints. Living together with mom and dad, she and her elder sister finally have their own place for decent living.
Natalija has been receiving a scholarship from a sponsor supporting her through Pomoc deci project "Give Refugee Children in Serbia Hope for Education" on the GlobalGiving platform for two years now. "I have no words to say how much it means, this financial support, to Natalija. Thanks a lot!”, says her mom through tears.
Natalija is a modest, cheerful girl. She is grateful just to have the opportunity to practise karate. She has a lot of friends. Her best friend is in the same sport. They met each other at a local competition, and since then the two girls have become good friends. "I, also, have a good friend who is 19 now. She was a European karate champion. I would like to be like her someday", says this brave girl.
Pomoc deci is grateful to everyone who enables Natalija and other ten refugee children to get a scholarship, and a total of 34 other children who get some other type of support (free school snacks, free textbooks, clothes when needed or even a computer).
We warmly appreciate any of your donations.
Please donate whatever you can and be the one of us who are happy to help as many children fulfil their dreams as possible!