Jovan Feels Like Being Part of the Champions' League Himself! 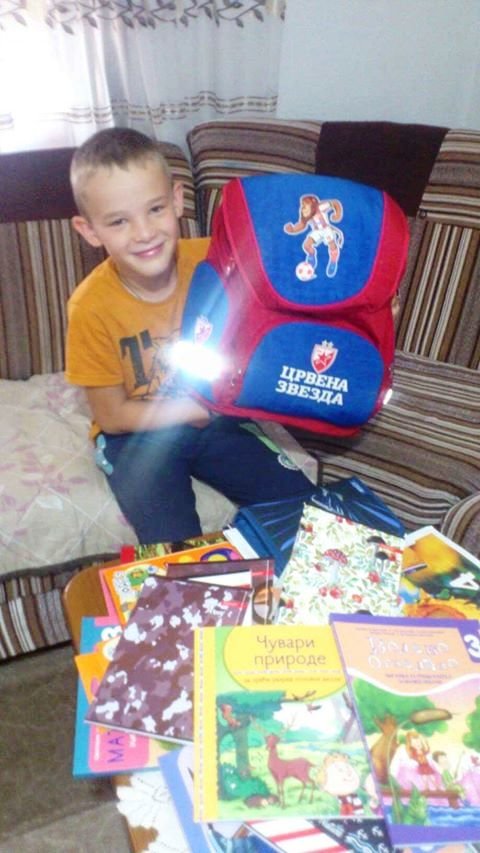 Jovan: "Its all new and it has a Red Star emblem!"

In two years of his schooling, Jovan had all A grades, but never had a new textbook... some of the textbooks he had never had, some he borrowed from his friends at the times of urgent need and only a couple of them his parents bought as second-hand books with inscriptions made all over them by their original owners... And he never had his own colouring pens or any other stuff that other children used to bring to the Arts’ lessons. Above all, he always carried his notebooks and those few textbooks he had had in a plastic bag.

At recesses, sometimes he could eat with other classmates, sometimes, he had had a sandwich from home, and a few times he just had to go out and pretend he was not hungry.

His parents, both unemployed former “internally displaced people” – the official name for those who fled Kosovo and Metohija under the bombs – saved every dinar from various odd jobs they could find to buy new clothes and shoes for Jovan, so that he, at least, would be warm and dry at school in the cold and rainy days. His younger sister had always worn the old jeans and old sneakers that her brother overgrew...

This school year, With YOUR donations, we could finally help this little boy and his family. We could commit to pay for his school meal for the whole school year, so at least one meal per day he would have as cooked healthy meal. We bought new textbooks, colouring pens and notebooks for the third grade. And we bought him a proper backpack to carry his new textbooks and other school material in it. We ordered all the books, notebooks, school material and a rucksack at a local bookstore in Kragujevac and told his father to go and pick them up with the boy.

“We went to take the books and all the other stuff at the bookstore and I can’t begin to describe to you the delight, the happiness, the joy on Jovan’s face. He is all smiles! And the backpack has the emblem of his favourite football team – the Red Star! Can you imagine: he carries it around and looks as if he himself is part of the Champions’ League now!” – Milos, the boy’s father was telling us on the phone as soon as they got home referring to the fact that a week earlier, the Red Star football team from Serbia had secured its place in the European Champions’ League for the first time after winning it almost 30 years ago and Jovan is a great fan of this club.

Thank you for helping us make children like Jovan happy, for making it possible that little boys and girls can go to school with all the school necessities and can have a meal with their peers at a recess time! Thank you for letting us bring the broad smiles on both children’s and their parents’ faces! We could not do it without your generous and continuous support!