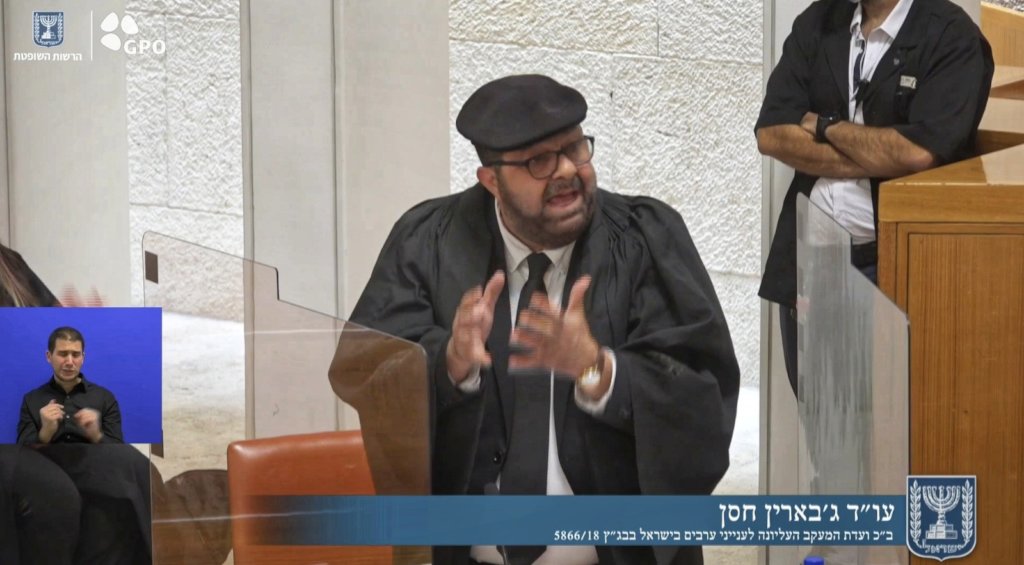 We hope that you are healthy and well in these very trying times.

In this update, we wish to inform about the progress of one of the important strategic litigation cases on Adalah’s agenda: our case against the Jewish Nation-State Basic Law (“the JNS Law”).

In July 2018, the Israeli parliament (the Knesset) passed the JNS Law – a law which has implications on the legal status of all Arabs living under the Israeli constitutional regime: Palestinian citizens of Israel, Palestinian residents of Jerusalem, and Syrians residing in the Golan Heights. The law constitutionally enshrines the ethnic-religious superiority of one group only in Israel – the Jewish people – and the identity of the State of Israel as the nation-state of the Jewish people (only). At the same time, the law anchors racial discrimination and legitimizes domination, exclusion, segregation, and systemic inequality.

Shortly after the law’s enactment, Adalah, representing all of the Palestinian leadership in Israel - The High Follow-Up Committee for Arab Citizens of Israel, the National Committee of Arab Mayors, and the Joint List parliamentary faction - filed a petition to the Israeli Supreme Court (SCT) demanding its cancellation.

Almost two and a half years later, on 22 December 2020, an expanded panel of 11 justices of the Supreme Court held its first hearing on the case, as well as 14 other petitions filed against the law. The hearing was broadcast live, with tens of thousands of viewers

Attorney Dr. Hassan Jabareen, Adalah’s General Director, argued before the court that the JNS Law excludes the Palestinian Arab minority in Israel, a homeland national group. He stressed that Article 1 of the Basic Law determines that the Palestinian people, citizens of Israel or residents of the Occupied Palestinian Territory (OPT), have no right to national self-determination in their homeland, and that the Jewish people have the sole collective right to govern and control the territory and its inhabitants. Under international law, the majority group has the right for self-determination, however, Jabareen argued, international law also prohibits the exclusion of other groups. He stressed that the Basic Law completely fails to meet the norms of international human rights law, and that no country in the world today is defined as a democratic state where the constitutional identity – the “We, the People” - is determined by ethnic affiliation that overrides the principle of equal citizenship.

In his response to the petition, the Israeli attorney general did not address any of the international law violations raised in Adalah’s petition.

A main purpose of the law’s enactment was to give constitutional justification for Israeli settlements in the OPT, and accordingly, Article 7 may grant the state the constitutional tools to further dispossess Palestinians from their land and to expand the illegal settlement enterprise in the occupied West Bank, including East Jerusalem, and in the occupied Syrian Golan. Article 7 may also legitimize racial segregation in housing in Israel and justify the exclusion of Palestinian citizens from state land allocations and budgets for development. Adalah stressed the unconstitutionality of this provision under international law, as well as Israeli law, during the hearing.

The law also discriminates against Palestinians in culture and language rights, abolishing the official status of Arabic, and leaving Hebrew as the state’s sole official language. This, Jabareen argued, violates the law which was maintained for decades, the only collective right of the indigenous Palestinian minority – over 20 percent of Israel’s population - in its homeland.

In advance of the hearing, Adalah provided updated information to the Court concerning the most recent critical observations and calls to cancel the law by UN human rights bodies and experts. For example, four UN Special Rapporteurs wrote to the Israeli authorities expressing their deep concerns about the discriminatory aspects of the law, provision by provision; however, the State of Israel never responded to this communication.

Adalah’s petition, and the 14 others, remains pending before the Supreme Court. It is likely that the Court will issue its decision in 2021.

To read more about the Supreme Court hearing:

Adalah’s special webpage on the case

The Nation-State Law had its day in court, as did the farce of Israeli democracy, by Orly Noy, +972 Magazine, 24 December 2020

Thank-you for your continued support to Adalah and our critical litigation.