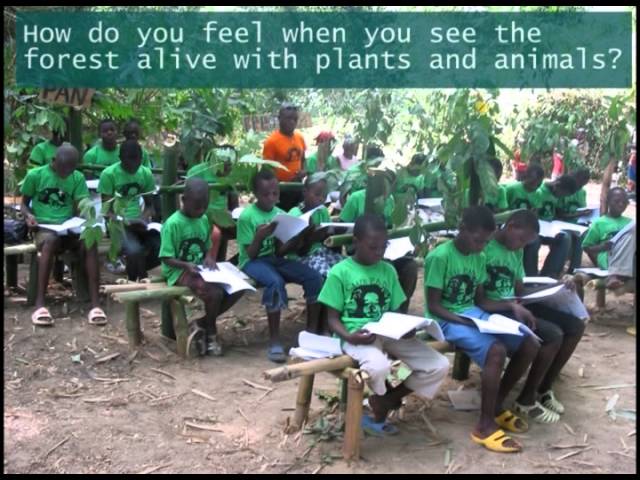 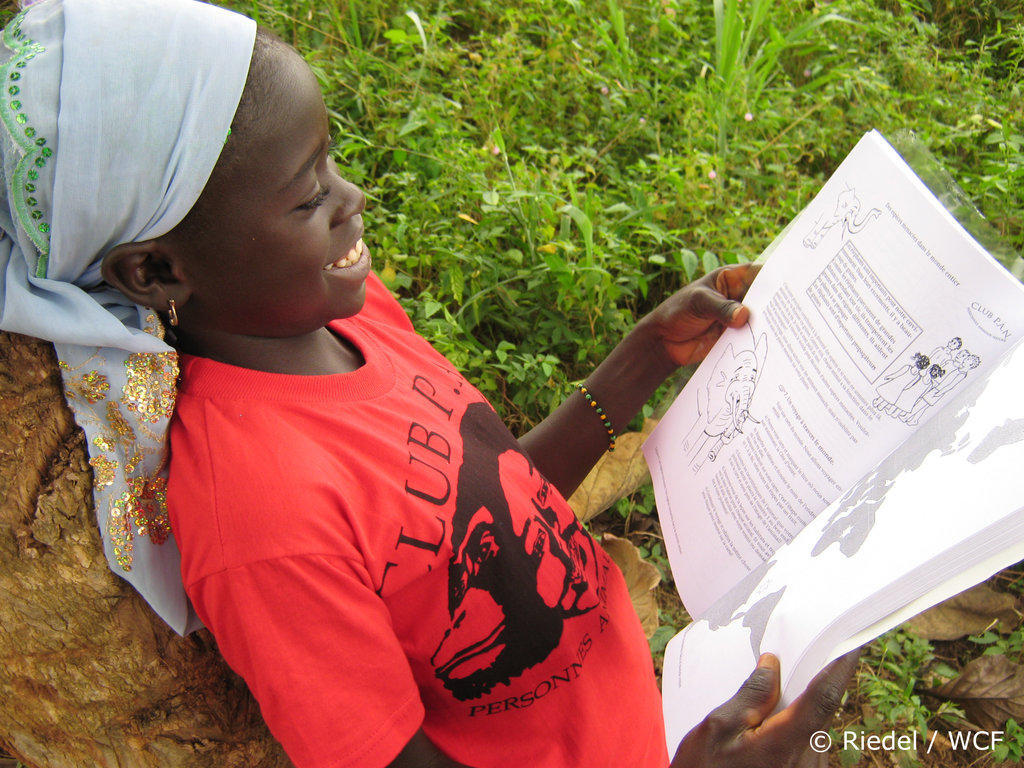 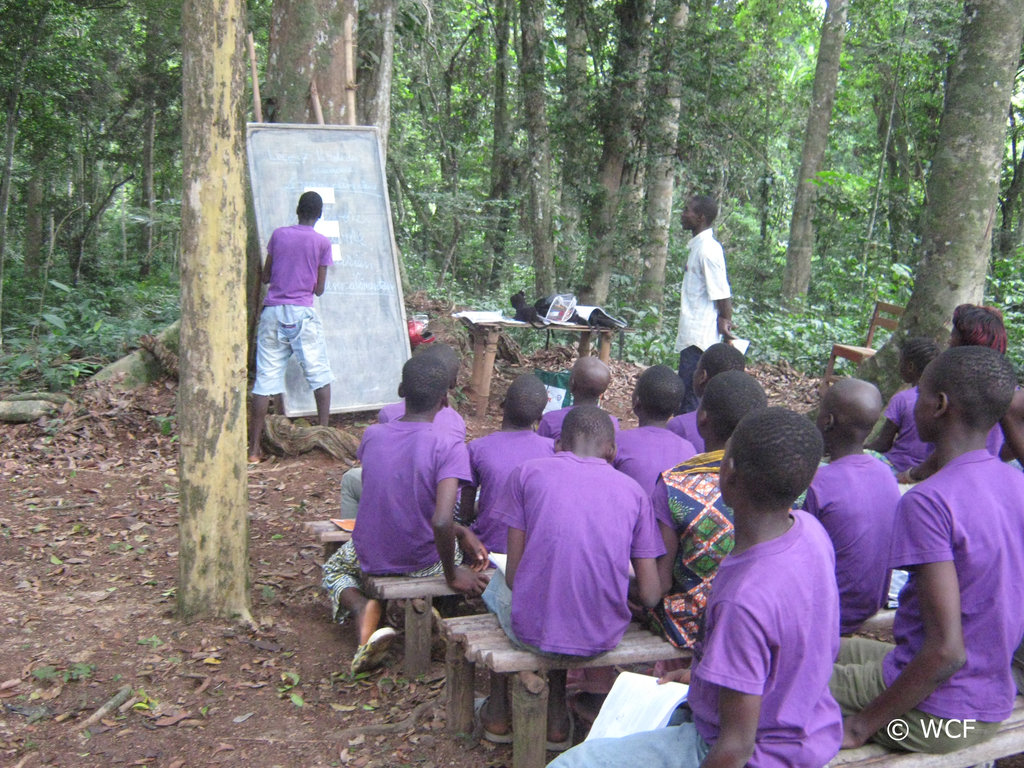 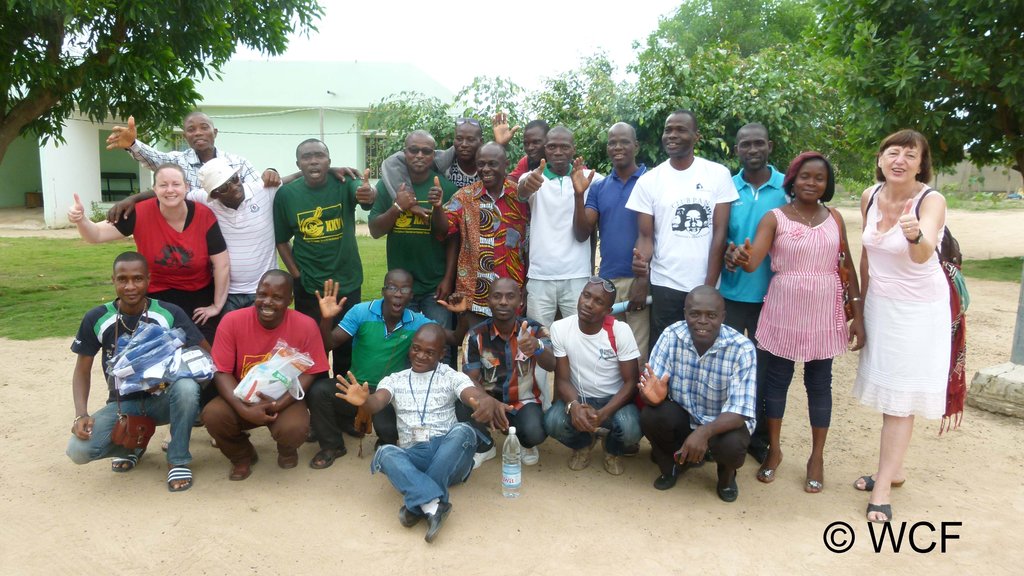 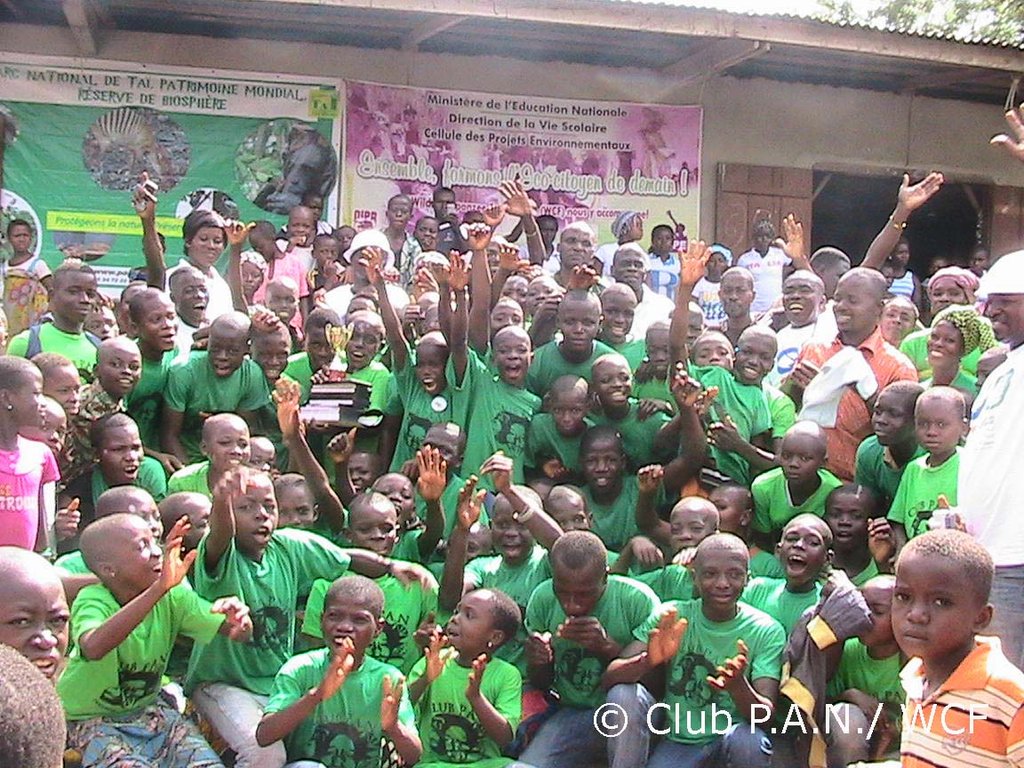 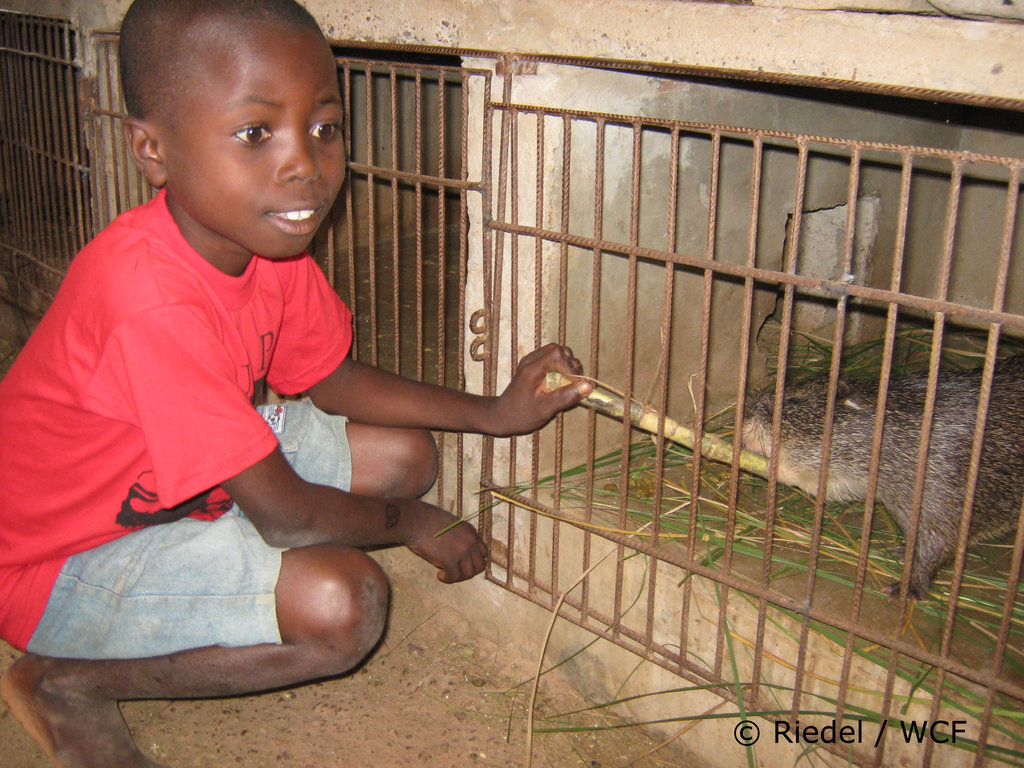 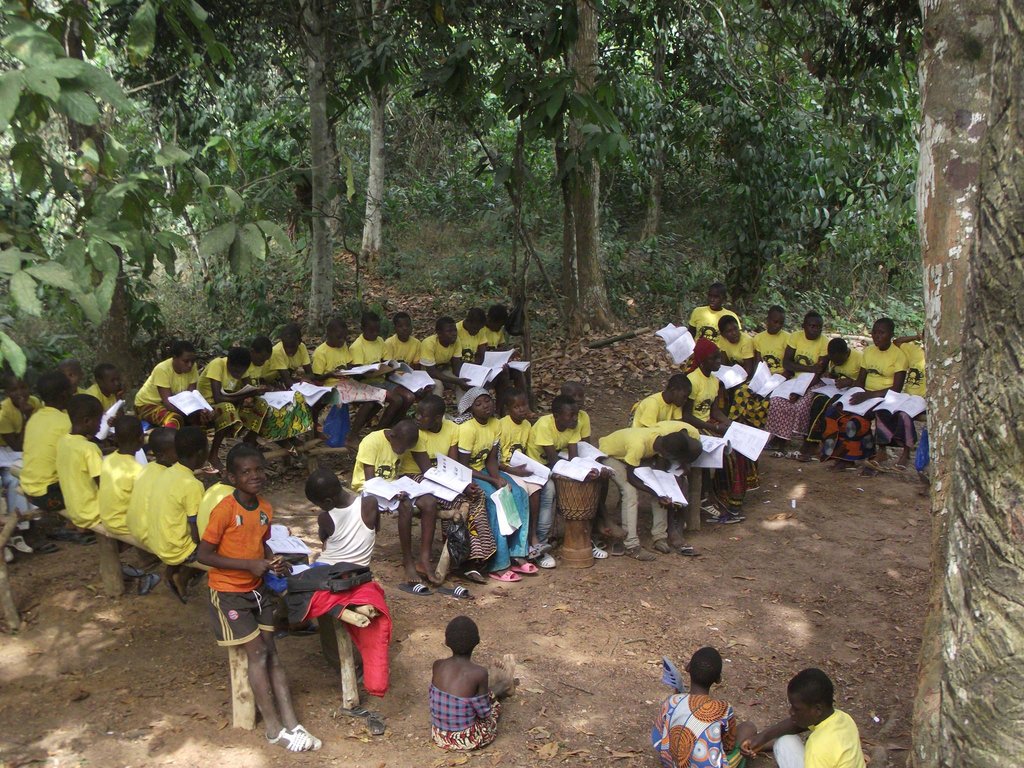 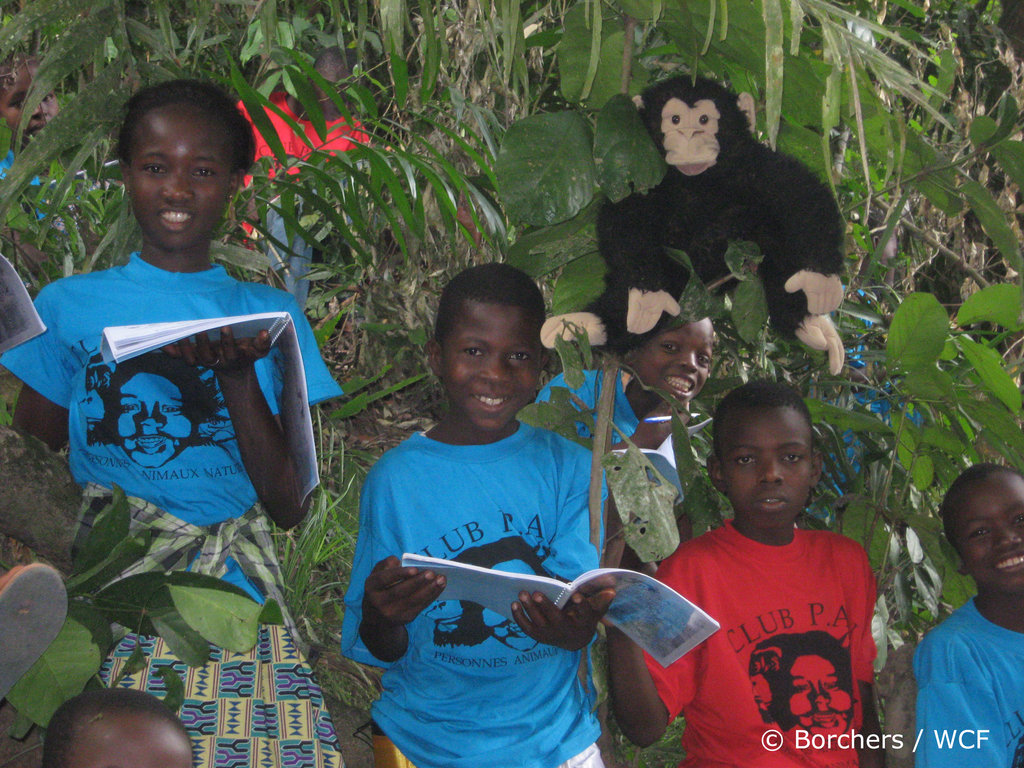 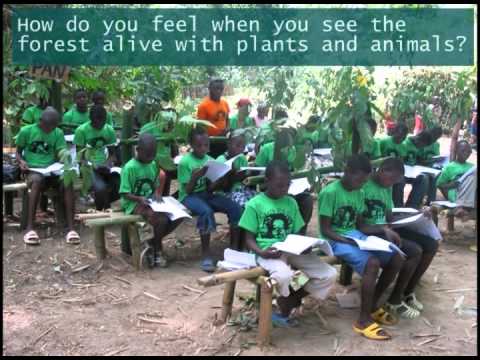 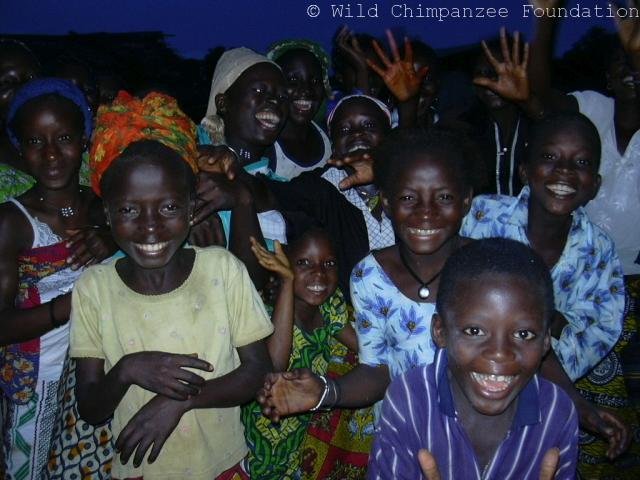 Club P.A.N. has now been running for nine consecutive years in Côte d’Ivoire around the Taï National Park. During the 2015/2016 school year five schools in Côte d’Ivoire participated with 262 children. The five schools around the Taï National Park were: Sakré, Ziriglo, Gouléako 2, Petit Tiémé and Adamakro.
The 12 Club P.A.N. sessions involved fact sheets, activities, role playing, songs and games with animal puppets which are based around a chosen theme. We aim to promote positive club spirit through interactive learning and essentially having fun. Each child that participated received a Club P.A.N. book and T-Shirt which means a lot to them. Some sessions focused on the concepts of sustainable resource use and the need for protected areas; others detail the natural history of various large protected mammals like chimpanzees and elephants.
During our active conservation session (Number 11) we had great conservation projects including tree planting at each of the five schools.
The newly created ”Health” session (Number 12) from last school year was included into the program again. This session was created by researchers from the Robert Koch-Institute in Berlin, as a response to the Ebola outbreak in West Africa in 2014 and concentrates on good hygienic practices for preventing the transmission of diseases.
To have a greater effect on the Club P.A.N. program, it was decided that parents need to be involved; therefore, parents’ days were created at the end of each school year. During these events the children present what they have learnt in form of songs, theatre, and poems to their families and villagers. This year each school held its own parents day, so a total of four events were organized. Only the school of Ziriglo did not organize its event because of a personal conflict with the school principal of Ziriglo and the CPE coordinator Mr. Kouakou, which is very sad, but hopefully solved. On average each of the four events had around 500 adult spectators.
Our evaluation results showed that Club P.A.N. was able to increase the knowledge of the children, not only about the local flora and fauna, but also about biological facts and global environmental issues (Borchers et al. 2013). Furthermore, we were successful in changing attitudes (Borchers et al. 2013) and were able to create a fun and dynamic learning environment that the children enjoyed.
In order to curb the threats of illegal bush-meat hunting and consumption, WCF developed numerous alternative livelihood micro-projects aimed at providing alternative sources of protein such as poultry, goats, cane rats and snails. The school micro-projects provide both an educational activity for many children in the villages but also a means to support the development of the schools. In 2015/2016, WCF supported school micro-projects in Para and Adamakro (goats), Ziriglo (chickens), Petit Tiémé (grass-cutters), and Sakré (snails).
Thanks to YOU, the WCF’s environmental education program was fully active during the 2015/2016 school year in five schools in Côte d’Ivoire. 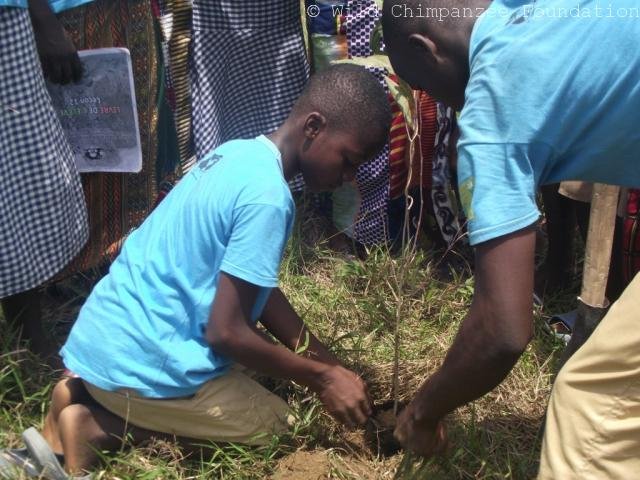 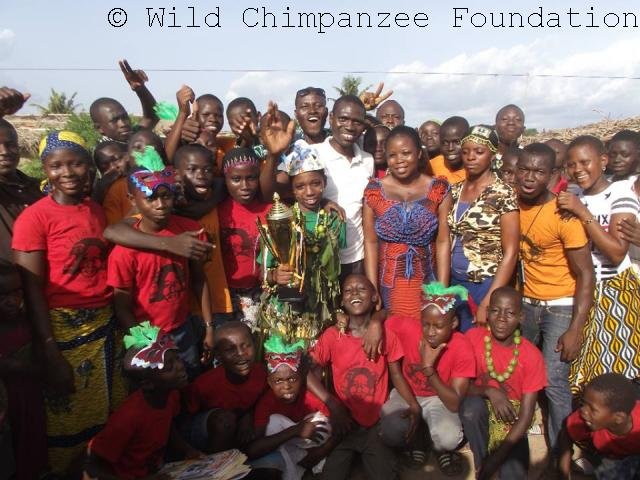 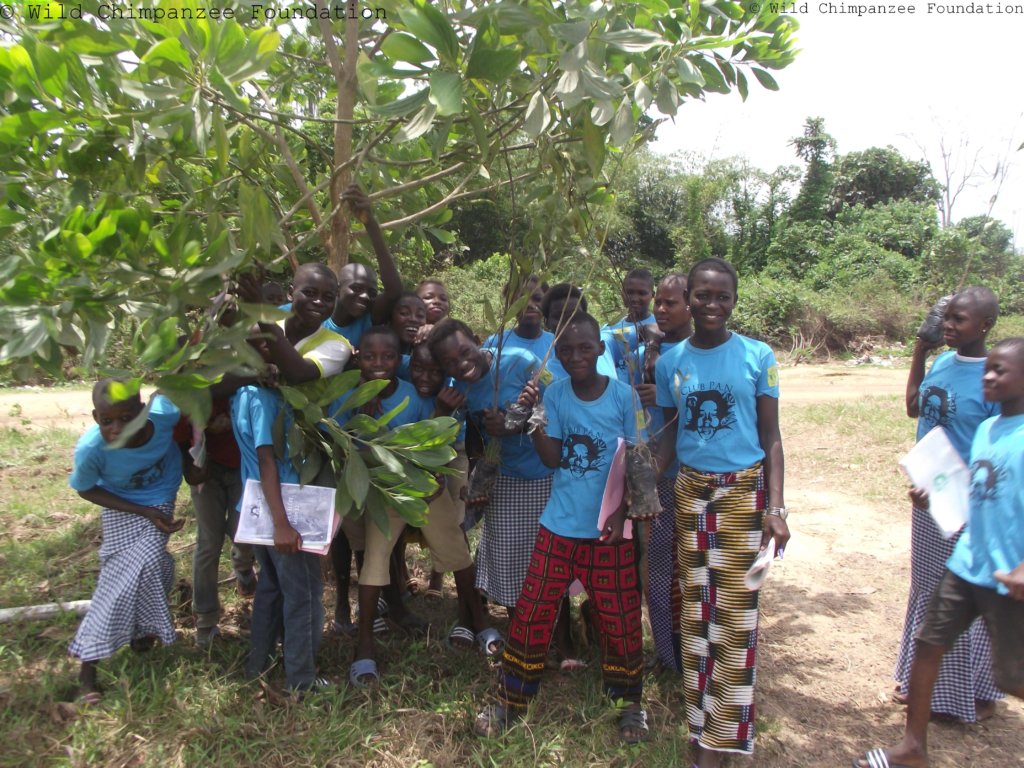 The environmental education project of the Wild Chimpanzee Foundation - Club P.A.N., has finished all activities in the three schools in the west of the Taï National Park in Côte d’Ivoire: Gouléako 2, Sakré and Ziriglo. We reached a total of 141 children with 12 sessions and their families through parents’ days at the end of the program in March 2016. The pre- and post-evaluations of children and parents are now being analysed. During our active conservation session Number 11, where the children can do something for the environment, we had great tree planting activities in all three schools.

In the two schools in the east of the Taï National Park: Petit Tiémé and Adamakro, the final Club P.A.N. sessions are still ongoing. In total 119 children take part in the program there. Post-evaluations and parents’ days are planned for May. A final report with the evaluation results will be published by WCF latest in July 2016.

We would like to thank all donors from the GlobalGiving platform, and the German partner-schools: Kepler Gymnasium Leipzig and Alexander von Humboldt Gymnasium Werdau, for making this environmental education project possible! 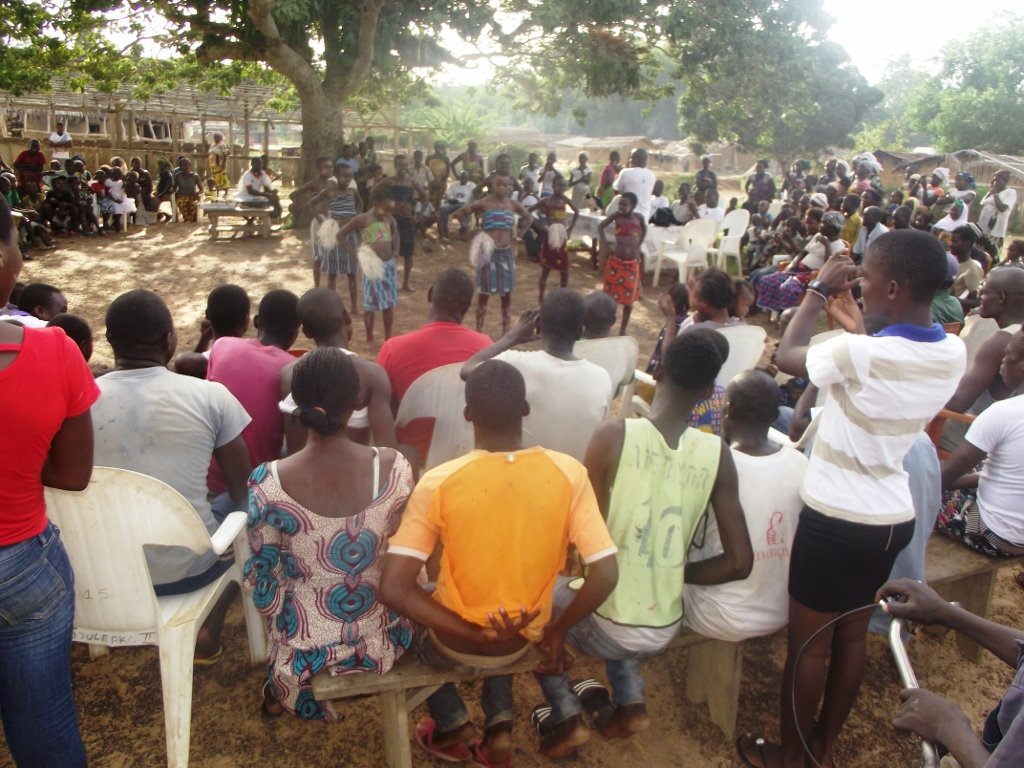 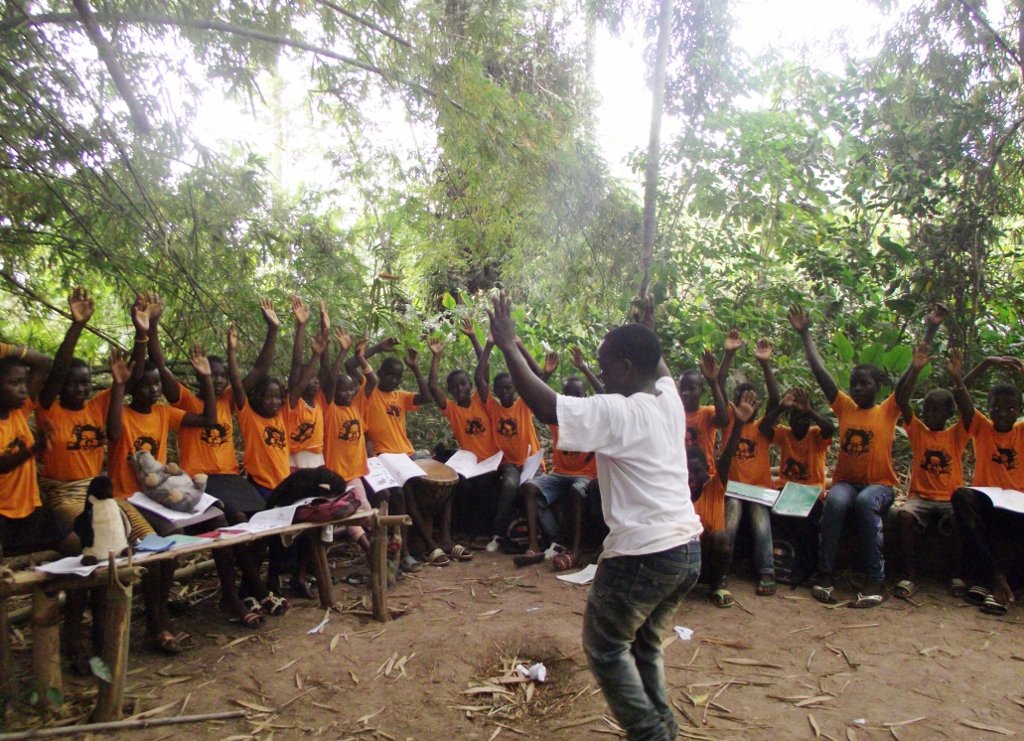 Club P.A.N. in Sakre with our teacher Modeste

In November 2015, Club P.A.N. started in 3 schools in the West of the Taï National Park: Gouléako 2, Sakré and Ziriglo. In total, we reach in these schools 141 children.

In the school of Gouléako 2, Konan Sévérin Yao is the animating teacher working with 52 children. Modeste Gnonkonte is the teacher of Sakré teaching 49 children this year. Modeste is with the Club P.A.N. environmental education project since its start in 2007. Pierre Kouassi Sekre is our teacher in Ziriglo with 40 children.

15 children from each school were personally interviewed by our local coordinator Ouattara Dabila before the sessions started for our pre-evaluation data collection. The same children will also participate in a post-evaluation after they have finished all 12 Club P.A.N. sessions. Right now, these 3 schools are participating in Club P.A.N. session Number 7. They are probably done with the 12 sessions, post-evaluations and parents’ days in June 2016.

In the two schools of Ziriglo and Sakré the WCF is also supporting school micro-projects to teach the children alternatives to bush-meat hunting and consumption by breeding their own protein sources. The Giant African snail farm in Sakré is active since 5 years now, the children and teachers are feeding, breeding and selling the snails. At the moment, they have 15 big breeding snails, 73 small snails and 73 snail eggs. The chicken farm micro-project in Ziriglo had some bad luck this year, because several chicken died because of a disease, now there remain 12 hens, 1 cock and 1 small chicken. But they will continue working on their farm.

Thanks to the donations from their German partner-schools (Kepler Gymnasium Leipzig, Alexander von Humboldt Gymnasium Werdau), the Club P.A.N. program also starts now in February 2016, in 2 schools in the East of the Taï National Park. With these two schools, WCF works since several years and they are very motivated: the schools of Petit Tiémé and Adamakro.

Instead of 15 Club P.A.N. schools, we can only be active in 5 during this year. But it is at least something and we would like to thank all donors that made this happen! 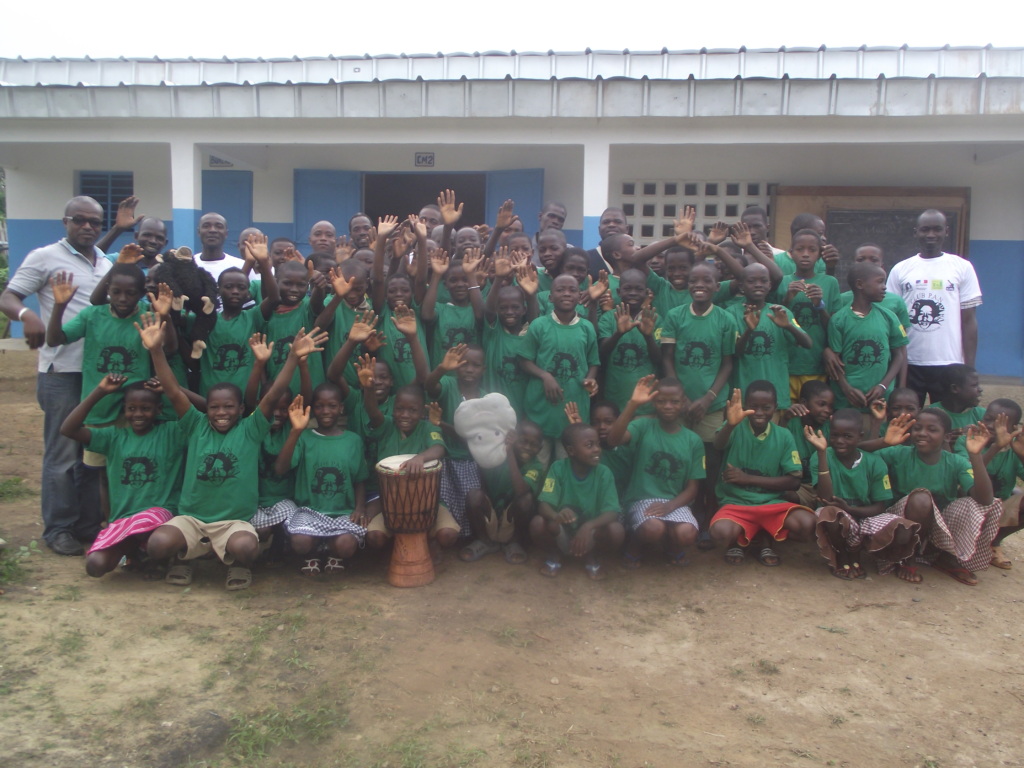 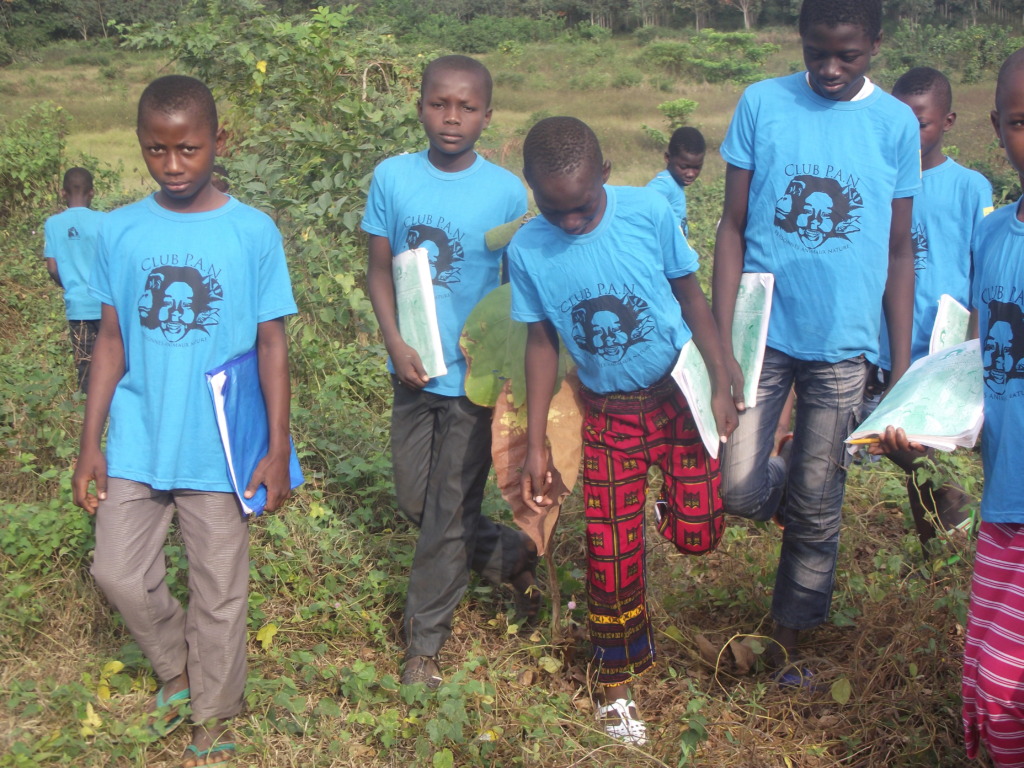 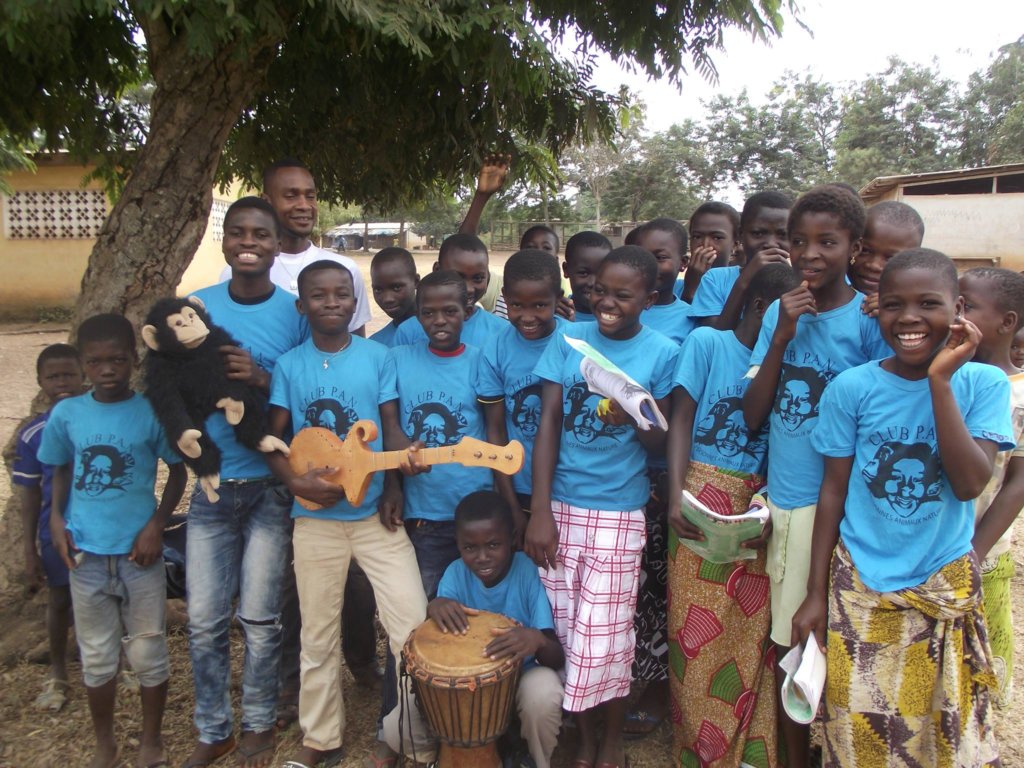 Thanks to the donations via Global Giving, we were able to save our environmental education program in 3 of the 15 schools around Taï National Park. The Club P.A.N. program started now in Ziriglo, Sakré and Gouléako, all villages in the east of the Park.

Furthermore, the program started in Guinea, in the schools of Kela, Koune, Kollet and Kalinko, all in the important Foutah Djallon Bafing Region, where still a lot of wild chimpanzees live.

In Côte d’Ivoire we have 162 children participating and 494 in Guinea. We wish all these children a lot of fun during the 12 sessions in the outdoor nature class rooms and hope they learn a lot about nature and wildlife.

Hilaire Guilahoux and Ouattara Dabila from the “Cellule des Projets Environnementaux, Soubré”, are the coordinators of the nature clubs in Côte d’Ivoire and Moussa Kaba is our coordinator in Guinea.

Please consider helping us to include more schools into the 2015/2016 school year, 12 more schools are waiting to start the nature clubs. We still have time till January 2016 to start the program during this school year; otherwise it is too late for this year! Thank you!

Find another project in Côte d'Ivoire or in Education that needs your help.
Find a Project

GlobalGiving
Guarantee
Donate https://www.globalgiving.org/dy/cart/view/gg.html?cmd=addItem&projid=21527&rf=microdata&frequency=ONCE&amount=25
Please Note
WARNING: Javascript is currently disabled or is not available in your browser. GlobalGiving makes extensive use of Javascript and will not function properly with Javascript disabled. Please enable Javascript and refresh this page.