by Action Against Hunger UK 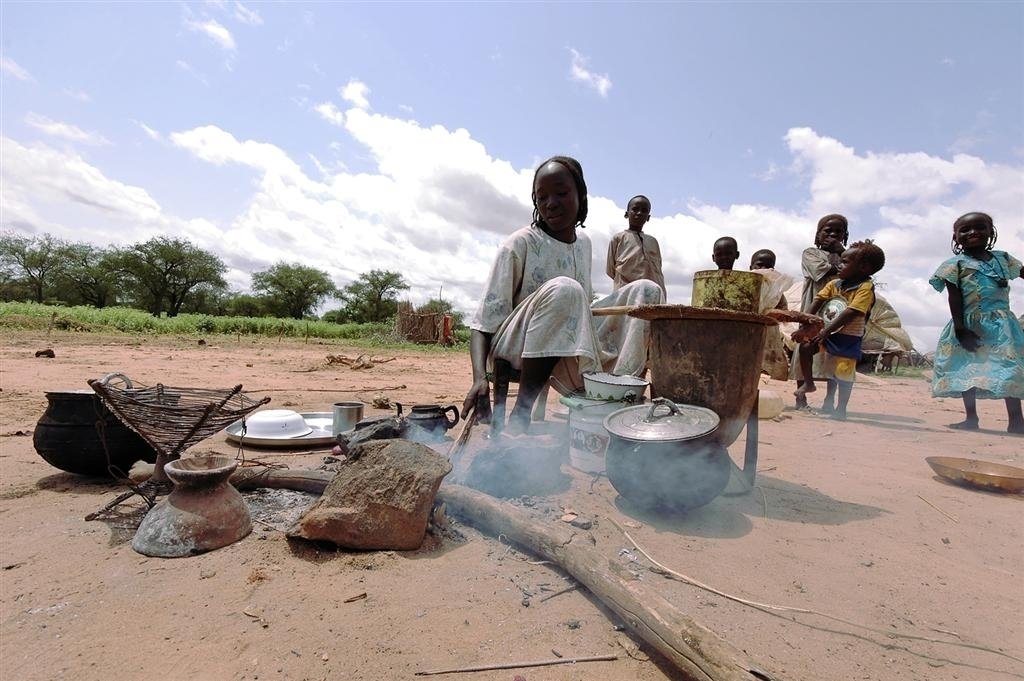 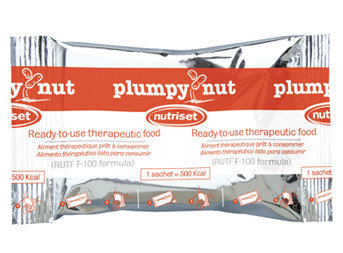 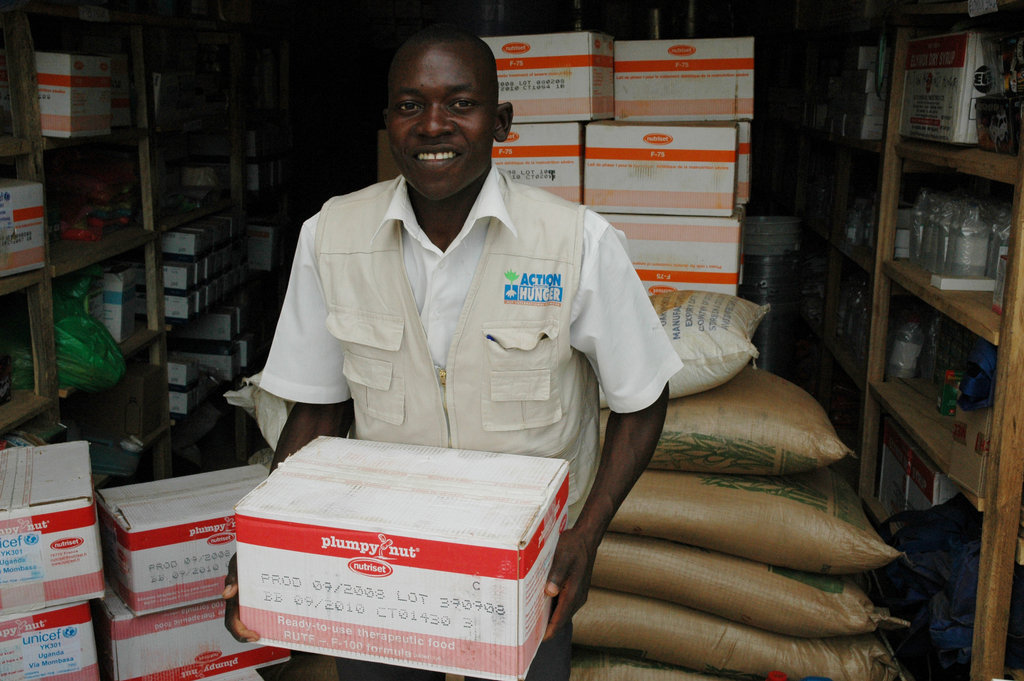 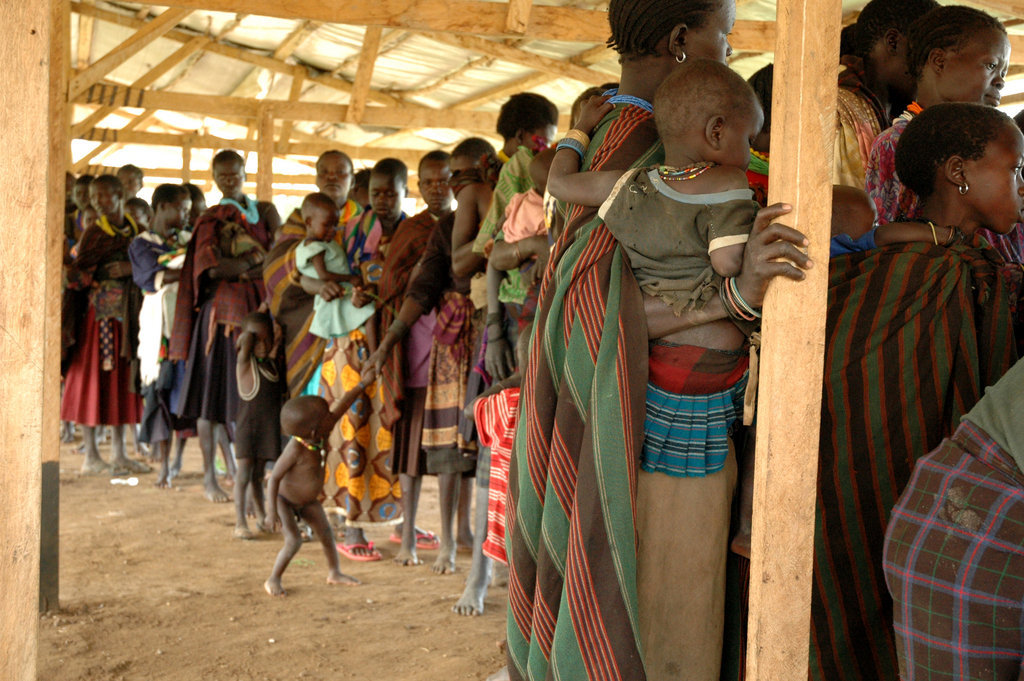 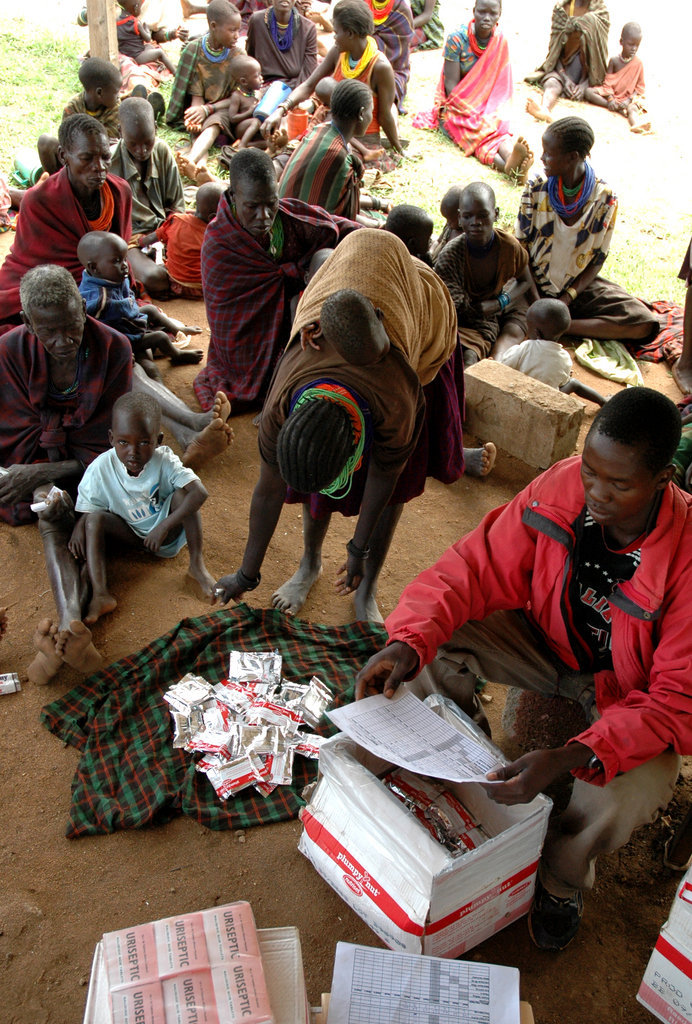 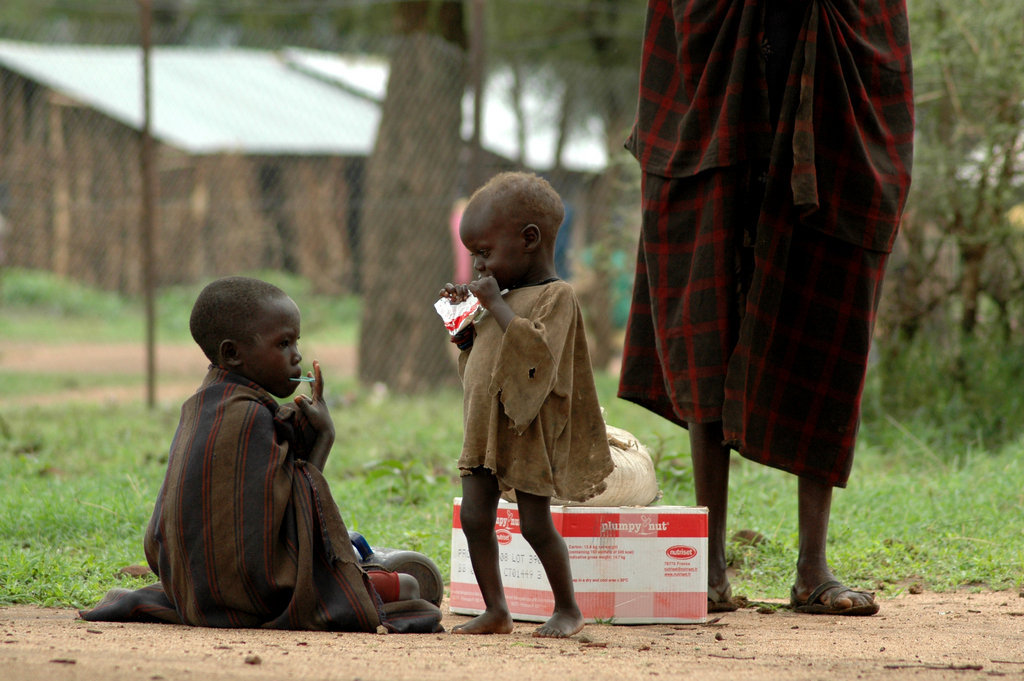 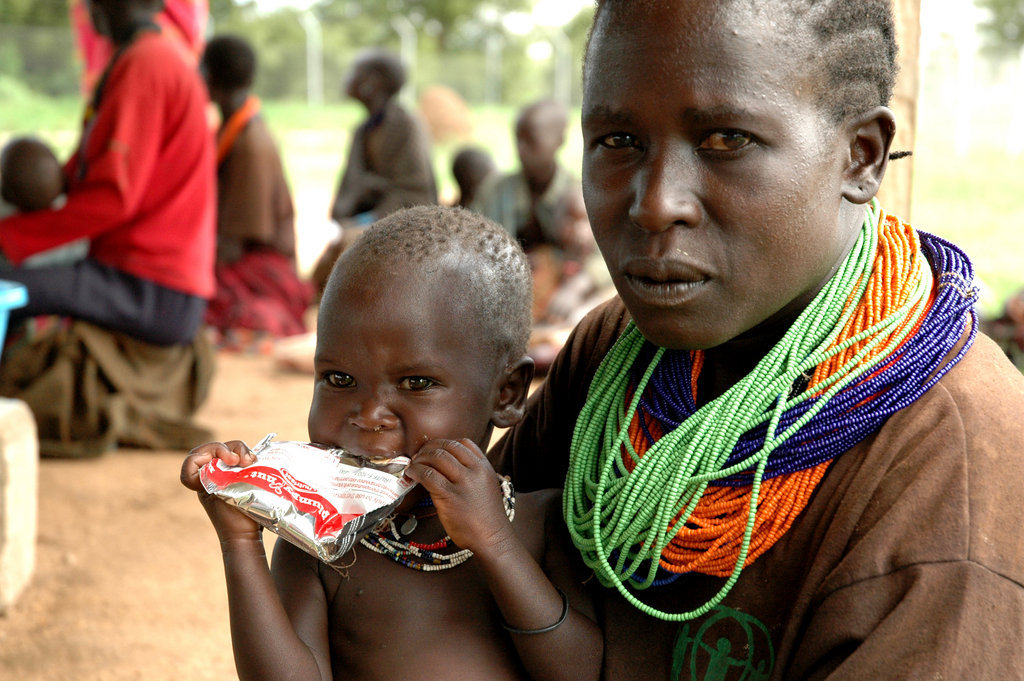 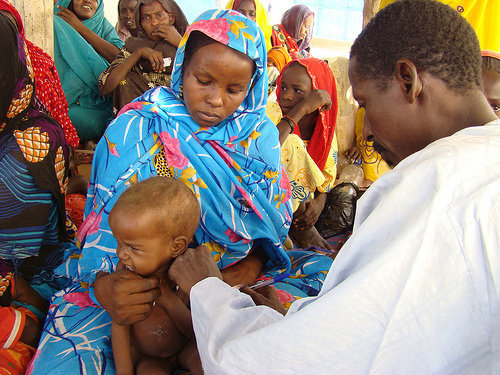 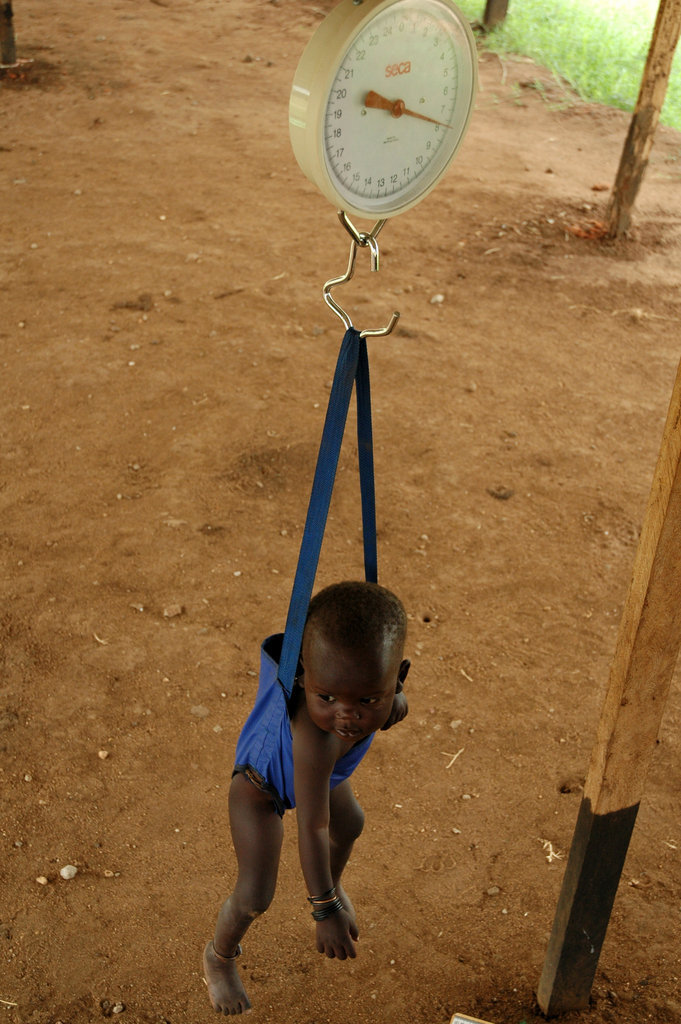 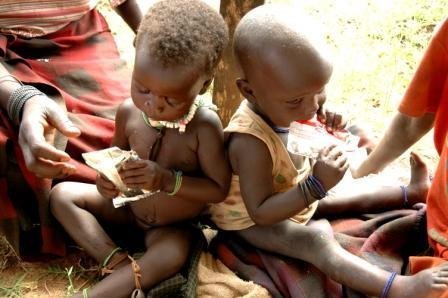 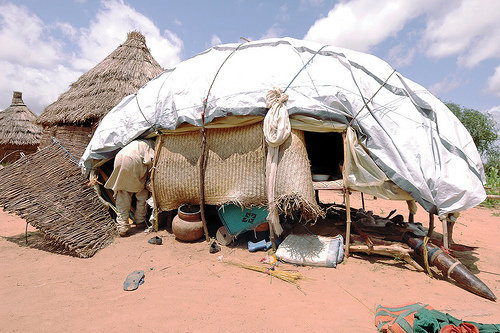 In Chad, such as in kanem region, where 60% of the population already lived in a permanent state of food security, the emergency threshold showed how much critical and alarming the situation of child malnutrition was. With a shrinking defense against seasonal hunger, families were forced to reduce their daily meals. Afterwards, the prolonged rationing of food has pushed many families into extreme poverty and mainly has a permanent impact on the growth and development of young children.

In summary, the project has been very successful. The initial target was to provide critical life-saving treatment, through provision of "Plumpy Nut", to at least 1000 children suffering from Severe Acute Malnutrition (SAM) across our Therapeutic Feeding Centres (TFCs) and Outpatient Treatment Programmes (OTPs) in the region. The cure rate for these children under 5 is currently 70.4% with the average length of stay for nomadic groups, the defaulting rate for beneficiaries attending the TFCs and OTPs are relatively high, at 29.6%. This is due to the nature of livestock movements and families needing to move to  pastures, or near sources away from our centers. Another positive note, the vaccination programme is proceeding well, with coverage for children in the region at over 73% as at the end of 2011.

Action Against Hunger wants to thank you. Your support was vital and made a real difference. In essence, your commitment and your contribution have allowed us through Global Giving website to save thousands of malnourished children in Chad but also have helped support this wider programme to help achieve the cure rates and vaccination coverage above. The project is now in phase of early recovery so the rest of the money will be allocated to Emergency Pool Funds.

The conflict neighbouring Libya has taken its toll. A large number of camels are usually sold in Libya, but trade has slowed due to the conflict. Similarly, cows and goats are often sold with Nigerrian traders, but the border with Nigeria is currently closed and Chadian herders struggle to sell their remaining cattle. The impact of all these factors is a dramatic rise in child malnutrition.

With more than 2,000 malnourished children admitted to Action Against Hunger feeding centres in Kanem in February alone, there was no time to lose. To date, ACF remains one of the only aid agencies working in this region, providing a range of life-supporting services whilst building the resilience of local communities to cope with crises.

Thanks to your commitment and contribution, Action Against Hunger's team have launched livelihoods programmes aimed at providing more than 600 metric tonnes of animal fodder to 3,500 livestock herders to prevent them from selling their animals at meagre prices in exchange for food, help them and their children through the lean season and ensure food security.

While the Eastern part of the country is somewhat stabilizing, Chad overall continues to face challenges related to protection and assistance for refugees, the repatriation and reintegration of migrants from Libya, and assistance to people affected by malnutrition, food insecurity, epidemics and natural disasters.

The Western and central areas of Chad continue experiencing large-scale severe malnutrition and food insecurity. The border areas in Southern and Eastern areas are also affected by high levels of insecurity, due to banditry and organised crime.

Thanks to your commitment and contribution, ACF teams continue to support the people of Chad and all money raised in the purchase of Plumpy Nut continues to help in treating children affected by severe acute malnutrition.

The end of the long reign of Muammar Qaddafi, killed on 20 October, threatens stability in the region. The upheavals that preceded and followed his fall have created new and potential problems, including massive displacement of populations.

In a context that has evolved from an emergency situation to relative stability in eastern and southern Chad, ACF has been pursuing its activities to assist malnourished children.

Cholera, the disease of dirty hands, was put in the spotlight recently on Global Handwashing Day which takes place on October 15 of each year. The disease affects 37 of Chad’s 61 districts and claims thousands of lives.

Current challenges to our project

Price of main staples millet and sorghum increased by 4% in N’Djamena in recent months, across the country and coarse grains prices are on the increase due to delayed harvests. Also the return of an estimated 48 000 Chadians from Libya is putting additional pressure on food supply.

In 2011, agricultural production has been affected in several parts of the Sahel by late onset of rains, irregular precipitation, prolonged dry spells and significant pest infestations. The expected average crop production in the coastal countries along the Gulf of Guinea will not be enough to offset the expected decline in production in affected Sahel countries, rising food insecurity in Chad. The lack of water could limit pasture production in the southern part of the country. Due to poor pastoral conditions observed in July, a slow progress of return migration northwards has kept animals south of their usual locations and those restricted migratory movements could create overgrazing problems in the South.

Although there are no longer armed clashes taking place inside Chad, the security situation remains volatile. Crime, the proliferation of light weapons and its porous borders have kept the country in a state of uncertainty.

In August, the Dogdoré base (East) was evacuated as a preventive measure, because of incidents and threats to our teams from bandits. ACF considers that this evacuation would not impact on the humanitarian situation, given that the installations are autonomous and the agricultural year has been rather good in this region.

A month later, cholera epidemics around Lake Chad spilled over into Abeche, where the organization has been conducting nutrition programmes. Your support continues to provide and supplement our on-going life saving work in Chad, during this protracted food and nutrition crisis.

Whilst the global community unites for Libya’s war against Colonel Muamar Gaddafi, thousands of whom come face to face with the opposition each and every day and now month by month are desperately trying to escape an escalating and ever life-threatening conflict that has taken grip of Libya.

As of May 2011, over 60,000 returnees are estimated whilst 30,000 to 40,000 Chadians remain hopelessly homeward bound, stuck in the heart of the war zone unable to return home. In response, United Nations High Commissioner for Refugees (UNHCR) and International Organization for Migration (IOM) are currently engaged in negotiations for establishing a humanitarian corridor. With over 300,000 Chadians expected to have resided in Libya prior to the civil war, more arrivals are expected.

ACF is increasingly concerned about the epidemic crises of which has now exacerbated to worrying levels. Cholera remains persistent and perpetual throughout the country, particularly in the southwest region. In Ndajmena over 100 cases of cholera have been reported - already exceeding the total number of cases recorded in 2010. Thankfully, meningitis is largely under control owed to the large-scale vaccination efforts led by MSF. In terms of measles, multiple immunization campaigns implemented from April to May by our peer humanitarian agencies as supported by ACF has suppressed further spread.

According to the government, only 6% of households use proper latrines while 88% defecate in the open in Chad. Since waste water disposal systems are often inadequate or non-existent, during the rainy season houses and latrines flood and contaminated water collects in stagnant pools.  Cholera is a waterborne disease -because potable water is often unavailable, majority of families drink water from open wells or rivers.  As a life-saving solution, with the approach of the rainy season it is critical for adequate sanitation to be in place and in time. In response, Action Against Hunger are currently formulating our plan of action to urgently meet the needs for better quality and life-saving sanitation.

Current challenges to our project

As we approach the middle of 2011, the conditions for crop production and pastoral rearing continue to improve dramatically – both climatically and in terms of trade. Nevertheless, the losses from the drought in 2009 and floods in 2010 have made positive gains and development impossible. Sadly the scars of the successive emergency crises remain deep, to be healed over time.

According to the Famine Early Warning Network (FEWSNET) cereal production has hit a record 85%, exceeding the five -year average (2005-2010).  However in rural communities, majority of households remain indebted from the droughts and floods that took place in 2009 and 2010.  These households are likely to use part of their harvest for repayments in 2011 and will remain in a vicious cycle of food insecurity irrespective of the excellent harvest conditions.

In terms of trading conditions, although price ceilings are no longer constrained its effects are still felt across the region, especially in areas with existing food shortages in the Sahel. To add, the neighboring conflict in Libya has led to the suspension of all food supplies from Libya to Chad. Since pastoral areas have a strong demand and dependency for grain, grain prices are forecasted to rise in pastoral zones.

The humanitarian situation in Chad is a complex one. With a history of extremely poor food security, the added pressures of the recent migrant crisis, Libyan conflict and growing concerns of a widespread cholera epidemic, have made the path to recovery extremely challenging and long-winded. Nonetheless, above all it is the lasting and prevailing impact of the past humanitarian events that has presented the greatest obstacle.

The nurturing pastoral and agricultural conditions are key to establishing a more positive livelihood for Chad’s families and communities. According to United Nations a high prevalence of Acutely Malnourished children continues to persist in Chad, particularly in the Bahr el Ghazel region – a region that ACF operates in. Where over 1 million children and their families in Chad are estimated to have yet recovered from the droughts in 2009 and floods in 2010, it is essential for Action Against Hunger to continue its work in supporting these children and their families to ensure their leap towards a positive and more affluent livelihood.

Thank you for helping your beneficiaries to help themselves to establish a healthier and more sustainable future.  Your support has been a critically life-saving yet simple solution to Chad’s protracted food and nutrition crisis.  We hope you will be able to help us further in bringing long-term positive change and happier future to the Bahr el Ghazel region, Chad.

Find another project in Chad or in Arts and Culture that needs your help.
Find a Project

GlobalGiving
Guarantee
Donate https://www.globalgiving.org/dy/cart/view/gg.html?cmd=addItem&projid=5134&rf=microdata&frequency=ONCE&amount=25
Please Note
WARNING: Javascript is currently disabled or is not available in your browser. GlobalGiving makes extensive use of Javascript and will not function properly with Javascript disabled. Please enable Javascript and refresh this page.